I'm a master of wang chung 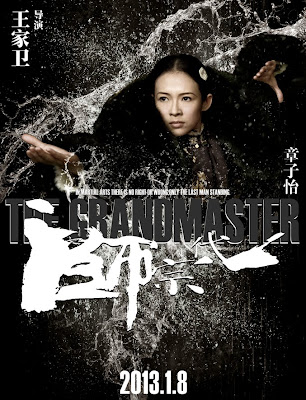 A Wikipedia article that I paid $8 to read.  And, yes, I do mean read.  No, I do not mean the subtitles.


The Grandmaster "tells" the story of Ip Man, master of the wing chun style of fighting.  It does this primarily through the kid-tested, mother-approved mechanism of blocks of white text on the screen.

Here's a text block for you, and the only one you'll need:

What remains of The Grandmaster is a confused, boring, and, surprisingly, an often visually unappealing mess.

It does not have a bad story.  It does not, really, have a story.  The first forty or so minutes are an endless series of stakesless fights and self-important conversations held largely in tiny crowded rooms between Ip Man and non-characters.  Only three of the fights (in the whole film), and only two of Ip Man's, are in any sense worthwhile endeavors.  I'd say maybe two of the conversations are.

The first fight is one of the good ones.  It opens the film, devoid of any context, and takes place in the rain and outside; even if it does give us our first disagreeable taste of what geography and blocking are going to be like in this picture, and even if none of Ip's opponents matter at all, at least people also look like they're actually getting hurt, and thus it would serve well as a sort of visual epigram to the tale of a kung fu master—at least, in a better movie.  The subsequent battle through the kung fu phone book, however, borders on tedious.

Ip Man of the southern schools, you see, is supposedly being groomed and vetted to face the northern grandmaster, Gong Bao Sen.  This sort of happens, finally, and the only good that comes from it is that it introduces Ma San, the heir apparent to the leadership of the northern schools, and Gong Er, the master's gender-ineligible daughter, into the biography.

Gong Er and Ma San do have a story.  It's a good story—but Wong is as disinterested in their story as I am in the rest of his movie.

Everything genuinely cool in The Grandmaster revolves around Gong Er, as the movie's unfairly derogated protagonist, and her struggle for notability and justice in a misogynist country.  She is played devastatingly well by the perfect human, Zhang Ziyi, as was entirely expected. 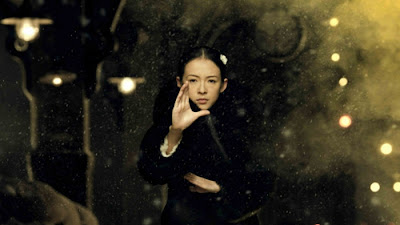 The film could have easily opened with Gong Er, her challenge to Ip Man, their very well-choregraphed fight (the best The Grandmaster offers), and the romantic connection thus forged between them.  It could have continued by focusing on her all the way through to her depressing end. 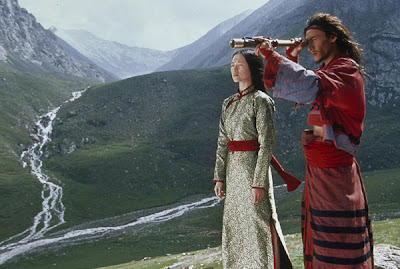 And, why, it might have been so self-evidently good that even general audiences would have had to agree.

Ma San's convictionless character, believing himself so subject to the vicissitudes of fate that he has no choice but to betray China and collaborate with the Japanese, is also rather fascinating.  Accordingly, he has about eight, maybe nine lines and is in the movie for four or five minutes.

Ip Man, by contrast, remains a cypher but we certainly see a lot of him.  Veteran actor, frequent Wong collaborator, polyglot genius, and part-time communist stooge Leung Chiu Wai imbues Ip with great dignity and the impression of an inner life that almost makes him seem interesting, but not quite.  Unfortunately, since this is his movie, with one salient and odd exception, we see Gong Er and Ma San through the dull lens of Ip Man's predominantly text-based adventure.

That exception occurs when, almost a decade after their first meeting, Ip Man and Gong Er finally reunite bitterly (not really bittersweetly) in Hong Kong, and Wong decides to hurry through her and Ma San's now long-past battles in a flashback.

It's easy to identify the huge problem with that, of course: we know (from a hushed conversation with her faithful retainer) that she has resolved to keep her vow because of honor, etc., and we know (from text block) that her vow means that she cannot have any relationship with Ip Man until Ma San is dead, so we know that she is alive and that Ma San is alive.  Thus the climax to Gong Er's actual movie, that somehow got spliced into Ip Man's non-movie, is rendered relatively inert, despite being admittedly pretty cool to watch.

Of course, even under torture I could not tell you exactly why she lets Ma San live.

Zhang then gets one scene in the meantime where through sheer talent she makes one of these quasi-poetic conversations genuinely come alive, and then, offscreen of course, she dies.  The point was not to explore her blood pact with herself, but the pain of the impossibility of love between these two walking, fighting thematic antitheses.  Boo hoo, I suppose; it was possible to do both, Wong chose not to, and I was given no choice but to not give a damn.

Ip Man also has a wife.  He's stuck in Hong Kong, and she in PRChina.  Who cares?  Absolutely nobody.

I have alluded to how horribly claustrophobic this movie is.  The rooms are small and dark and I imagine violate even mid-20th century Chinese fire codes with their throngs of random extras.  I guess establishing shots are for less vaunted filmmakers, and I lost count of how many scenes open with a close up of an actor's face and never cut anywhere else except to a close up of another actor's face (or their fists or their feet).

To me, the key selling points of The Grandmaster, other than Wong, were kung fu, Zhang Ziyi, and a period piece set in late Republican China.  I got kung fu—by which I mean a lot of sparring and one potentially lethal duel that still didn't go anywhere.  I got more Zhang Ziyi than I've had in a while, and that's certainly not nothing.  But as a period piece, even though it is based on actual people and events, this movie could have taken place in Qing China or in Red China for all it mattered, and the only thing that might've changed was the haircuts.  Foshan is a really big city, and in The Grandmaster it is reduced to a courtyard and a brothel.  Hong Kong feels like one teahouse, one martial arts school, and one street where some kids set off some fireworks this one time.  The eight-year Second Sino-Japanese War which Ip Man survived takes place almost entirely within, you guessed it, a text block.

I'd also like to think that if that awful, choppy slow-motion effect wasn't so ubiquitously used, about twenty-five minutes could have been freed up for dramatic denouements not related by caption.

As a Wong Kar Wai movie, it was never terribly likely to be an ordinary biopic, and that was fine; maybe it was not that likely to tell a conventional story, which is also fine, because I like broody and melancholy stuff about as much as I like action.  I also know, from information and belief, on top of having seen In the Mood for Love (loved it) and 2046 (loved it more), that the man is no idiot.  Much, if not everything, that I hated about this movie was, I expect, done on purpose, even if—like with the slushy slo-mo—I can't discern what that purpose is.

Yes, it's easy to tell which movie I saw this weekend was the auteur's, and which was the amateur's.  The scary thing, though, is that the auteur can often hurt you worse.  If Wong's goal was to evoke a mood, or even just to make something pretty, well, it didn't look pretty at all, and the mood it evoked in me is one of annoyance and anger.

P.S. It does so happen, you might be interested, that Wong Kar Wai has indeed denied the existence of a four hour version.  On the other hand, Zhang Ziyi and Leung Chiu Wai have registered their sadness that scenes they were in and which they liked were excised.  Adding intrigue, Wong did sign off on the 108 minute cut.

The terrifying truth may be that this cut of The Grandmaster is what Wong personally wanted.  The very prospect makes me more sad.  It's possible that it wasn't cut to shit, but it still feels cut to shit, and that's even worse, because restoring the extra 22 minutes of the Chinese version may, in fact, not add any more coherence or drama to this movie, if it's 22 minutes even less valuable than the 108 I've seen.

However, I do understand it would at least get rid of some of those damnable blocks of text.  I know when World War II ended, Kar Wai, thanks.
Posted by Hunter Allen at 1:51 PM