Basically, it's The Eternal Jew, but with Millennials 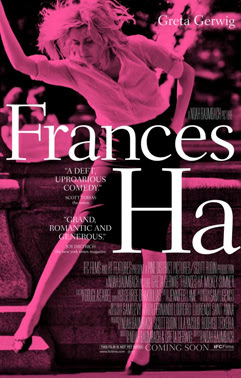 I didn't know how old Noah Baumbach was when I started watching Frances Ha, but before the half hour mark I knew he was over forty.  The tell is a sequence where, in service of a joke (I think it is supposed to be a joke?), Frances cannot pay for dinner with her debit card, because the restaurant only takes cash... or credit cards.  There are a few ways it's possible she doesn't have a Visa or Mastercard logo on her card, but it would have to be a weirdly specific one.  No, let's not exhaust ourselves trying to explain it; this is the sort of scene most likely written by someone who pays for his groceries with checks.  (The reason Frances is splurging on dinner, by the way, is because she got her tax refund.  In the mail, like some kind of caveperson.)

You'd think his wife or girlfriend or whatever Greta Gerwig is to him, as an actual Millennial familiar with the technologies of our age, could have stopped him, but, to be nice, her co-writing credit on Frances Ha does not prove her skills as a scenarist either; and to be not very nice at all, it takes an already ugly movie and gives it the sickening sheen of a vanity picture.  But this is Baumbach's folly, because he's the one who should know better, for to behold his other writing credits is to behold conclusive evidence of his talent. Yet, his best work was on a movie about getting so old even your kids have started dying.  And, man, The Life Aquatic was great! 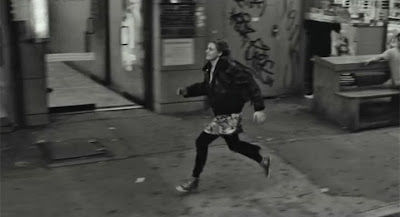 It may please you to despoil "Modern Love" by making it the theme song to your fatuous little trifle of a film, Baumbach, but the Bowie thing was a lot less insulting to the grand old man when you were writing movies that didn't suck.

I'm not at all sure it is meant to.  I am reasonably certain that it's supposed to be a whimsical slice of life for the Manic Pixie Dream Girl with whom our Hipster Millennial Audience can sympathize.

In the broadest of strokes, it might be.  Frances Ha is the story (loosely defined) of a loveable loser (loosely defined) in her late twenties still working temporary gigs as an apprentice dancer, who doesn't want to give up on the dreams (loosely defined) she's worked so hard (loosely defined) to achieve.  If you remove my "(loosely defined)" snark, that's the basic set-up to hundreds of perfectly acceptable and more than a few great films.  For example, even being very literal, there's Black Swan, which was also a movie about a dancer in New York who was having trouble; the difference is that movie had a good story, was really cool to look at, and didn't make me sad to be alive.  Actually, on reflection the similarities aren't even skin deep; I only mention it to note that if Frances Ha shared Black Swan's ending, one would have to be a bit more favorably disposed toward the project.

It's not something you think about too often, but most movies are about people having bad times.  This is because one of the crucial functions of movies is to serve as entertainment, and entertainment relies on story, which relies on conflict, and people overcoming bad times is the core of conflict; and if a movie is not making you feel good, it should at least be purging you of feeling bad, which is called catharsis.  Movies that don't have fully-formed stories can still be pretty good, but they require a great deal more cleverness than movies that do.  Frances Ha doesn't lack in wit, it's true, but suffers sorely from a dearth of cleverness.  Such as it has a story in the first place—and calling Frances Ha "vignettish" would be rank flattery—it is a story that could be described as a person having bad time, but it is much more accurate to say that it's about a bad person, having a time. 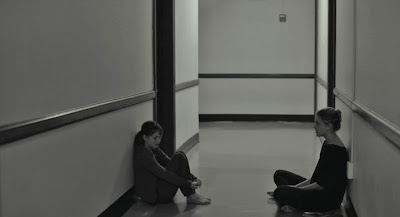 Here, Gerwig and Baumbach were almost forced to write a part where Frances empathizes with another human being, but luckily they cut to a completely unrelated scene.  Hey, it's called suspension of disbelief, folks, and it's important to maintain it.

To Gerwig and Baumbach's credit, her situation really is often entirely recognizable.  And Gerwig is, technically, good at bringing Frances to life.  Yet her reactions are rarely explicable; or, rather, when they do imply that she experiences something not unlike human emotion, they are so exaggerated as to serve as no less than an incitement to violence.

Take, for example, when Frances, always moderately impoverished and now recently unemployed, blows money on a frivolous purchase to make herself feel better.  That would be perfectly normal, except when Frances blows money, it's on a trip—to Paris.  And how about when she refuses a "menial" job with her dancing troupe because it isn't what she wants to do—that's a moment of misplaced pride we've probably all of us felt even if we pushed it aside, but it is then suggested to pay as much or more than her previous failed apprenticeship (and it certainly pays more than "nothing," which is her other present option).  Let's not forget that when she says what her boss can do with the charity she's giving her, she's about to get thrown out of the apartment that her roommates have been nice enough to let her stay in at an already reduced rent.

But "nice" or not—they are usually "not"—it's not as if Frances is the poison pit at the center of this film, while the remainder remains edible.  The portrait of the artistes as young men and women painted in this movie is one of human garbage from one end of its canvas to the other.

No one has a real job, of course; except the one guy, who is villified through most of the movie as a cretin of the thoroughly brahish persuasion—though, true to her nature as a social parasite, Frances isn't a bit sorry to exploit his real income to the extent of expecting him to pick up her checks even when she screams at him and storms out of the restaurant with the bottle of top-shelf vodka he bought at her insistence.  Everyone else borrows money from their parents, or their step-parents, constantly, even as they curse them in the process.

There is not one character in this movie with more than ten lines that does not use one of them to relate to their disinterested friends and an embarrassed audience the content of their stupid hobbies.  And I'm not sure a single, solitary scene goes by without at least one line that makes you ashamed to have been born in America after A.D. 1980.  A potpourri of Frances Ha, prepared for your infinite delectation:

"I just e-acquired some rare Ray-Bans."

"Twenty-seven is old though."

"This is a sample script I'm writing for the third Gremlins."

"It's a house party—that's the theme.  It's in an apartment."

"Then I miscarried, which was cool."

There's an ugly whiff of accuracy to all this blood libel though, that almost makes me want to reevaluate the movie as a piece of provoking art.  There is a discomfiting realism to Frances and her friends' needs to keep up the appearance of someone having the Awesomest Time, lest you be the uncool one.  Because that is what our society has become—an endless competition, with even friendship lost to the extension of the domain of the struggle.

In fact, if anyone I know mirrors Frances, it's me.  I too pursued some pretty stupid dreams.  I too am surrounded by phonies whom I despise and who despise me in return, though we make the pretense of friendship, or its 21st century equivalent.  I too have a job that fires me about once every three weeks.  It's even barely possible I hate Frances and her dumb movie because I don't particularly care for Hunter Allen and his dumb life.

But if this is a mirror, it is a trick mirror, and the reflection is warped and it lies.  This is not me, this is a caricature of me; and, as far as I can speak for every Millennial, us.  Many of us are like her, in description, having never taken our place in the economy and in society, never having started families or careers; failures, qualified to one extent or another, that never just grew up.  But for us, in the real world, it's because we were never allowed to have our place; never allowed to build our adulthood.  So we write blogs, or whatever stupid, pointless things we feel like we need to do to fill our empty time and our emptier hearts.  Meanwhile, Frances blames us for the pointlessness of our lives and laughs at the notion that we once might have had dreams.

I don't think this was ever the movie's intent, and more importantly it's never the movie's tone.  I don't buy Frances Ha as a satire, for a second.  If it is, it's too inaccurate and cruel and insulting to be of use to me; indeed, too devoid of prescription to be of real use to anybody, except as a propaganda piece.  On those narrow terms alone could Frances Ha be considered successful.  The vast critical success and deep penetration of the film into high culture—there's a Criterion release impending, anyway—is frankly terrifying, and it won't be long now before Brooklyn wakes up in the small hours of the night, to the sound of broken glass—the terrifying symphony of their $9 a bottle undrinkable craft beers being dashed upon the ground.  If this film had gotten a wide release, by the end of its theatrical run, jackbooted gangs of out of shape men whose healthcare we've now been obliged to subsidize would already be stalking every city in America, beating up guys for wearing hats which they have deemed unpatriotic.

And, yet, as it is not a satire, as a piece of art it is even worse , because at least as a satire it would have teeth, but as a trifling comedy it is no more than a hoppy, goofy failure that believes itself to be effortlessly charming when it is in fact utterly repellant.

It is my impression that when this movie ends, or rather when this movie stops, we are meant to feel happiness in our hearts for young Frances.  For now, finally, has she achieved a life goal (very loosely defined); she's put on a show attended largely by her acquaintances, whom I doubt paid to see it.  It's a happy moment indeed, even though she's surrounded by the same empty husks as she was when the film began, and even though fundamentally she is just as empty and pointless and unfunny and uncharming and uninteresting and selfish as when our time with her began.  Because she's shown a hint of growth, after all.  She finally accepted the menial day job.

That had been held open for her for months.

Yeah.  This movie is terrible.

But I did laugh at the miscarriage line. Now, if you'll excuse me, I don't work till Wednesday and I have a whole stack of vintage Superman's Girlfriend Lois Lanes to get through so I can ironically comment on them before then!