The Jasper Johns of tonally confused tae kwon do 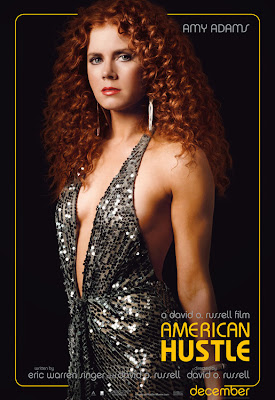 You see, because his compositions were vivid but muddled and stupid too.

And yes, the title of this review is a direct reference to a line in this bad movie.

American Hustle is a hydra of a film.  In any given scene, it's hard to know which head is going to pop up: will it be the bluff and double-bluff thriller?  Will it be the period romantic drama?  Will it be the whimsical if only marginally funny crime farce?  Will it be the absurdist Coen Bros. misfit comedy?  Will it be the redemption story of a cynical man and the cynical woman who loves him?  Or will it be the music video, bearing as much if not more resemblance to the Beastie Boys' "Sabotage" than any piece of actual 1970s material?  About half the time it's going to be that last one, so Goddamned insistent that IT IS NOW! now, in the fashion only a movie made over three decades later could have the perspective for, and in a manner not even the most instantly-dated movie made in its own present could ever possibly be.

This shouldn't be so; David O. Russell has mastered discordant tone more than once in the past.  In fact, it's almost his signature.  But he can't control the monster he's created here.

In its favor, it's a gorgeous beast.  The color palette takes Riddick's Brown Crown for 2013 and I mean that in an entirely positive way.  The production design may be so contemporary it becomes anachronistic again, but it is beautiful.  Look at that wallpaper in Rosaline's house.  My God.

Two unfortunately crappy stills from probably my favorite shot in the whole movie, divided by a whip pan to the mirrored ceiling.  It's pretty.

The costumes are, to say the least, stunning—none more so than the dresses, that in particular caress Amy Adams like they aren't even material in solid phase, but liquid dye and molten metal flowing over her skin.  In case I didn't make it clear: Adams is really, really hot, all the time to be sure, but especially in this movie; and since her personal physical marvel is a deliberate and frankly central part of the old mise-en-scene, I don't even feel that weird discussing it in the fashion of a leering Tex Avery wolf.  But it does help, though honestly my bias may be running the other way thanks to her hot hotness, that Adams' is by far the best performance and the only one that finds a totally even keel throughout.

I would also choose Earth over Krypton.

Yet, it's ironic, because she's probably given the most ephemeral persona of any of the various users and abusers in this con artist film, to the extent that I'm pretty sure that when Bale is narrating (this movie has a lot of narration, by at least three narrators, and unlike in Pain & Gain, it adds very little) about how people even con themselves, he's probably talking about her more than he is himself.

Let me clarify—no one is bad, not even close.  Not even the surprise stunt-casted actor whose identity I will not reveal, but whose appearance will take you right out of the movie.  And not in a fun way, like realizing that it's Tom Cruise in Tropic Thunder, because that movie was an actual comedy.  But they are nonetheless quite good in their cameo, and frankly far better than they were in the last big role of theirs I reviewed, even if it's just as unfathomably fucking cliched.

But if no one is bad, the principals are almost too good.  The actors didn't fail the tone, the tone failed the actors—no matter which face of the monster you're looking at any given moment, Adams, et al. are selling it with gusto.  There's no reason to buy it, but one both pities and appreciates the amazing effort.

The story of American Hustle is secondary to its various evocations of style, but it does exist.  Con artists Irving Rosenfeld and Sydney Prosser (d/b/a as a "British noblewoman" with "banking connections" in "London," Edith Greensly), who was once working as a waitress at a cocktail bar when she met—oh, sorry, that's the 1980s.  Let me start over.

Irving meets Sydney, and he gives her a taste of the good life and trains her in the ways of the conperson.  They form an effective team.  He's got the brains, she's got the brawn, they make lots of money—oh, did I accidentally do the 80s again? I hope you don't think compulsively and pointlessly referencing songs from a particular decade is annoying—until undercover FBI agent Richie DiMaso comes along and busts them.  With their freedom in the balance, DiMaso conscripts them into a grandiose scheme to uncover corruption at the highest levels of government and business, amongst whose ranks we find no less than Atlantic City mayor Carmine Polito, a vaguely dirty politician who nonetheless is nothing but sincere in his motives to get his people back to work, by any means necessary.

This is the "some of this actually happened" part of American Hustle, which is based, very loosely, on the ABSCAM investigation, a thing of which I knew nothing and having seen this movie still know little and care about even less, but that's probably because most movies in this vein do not seem a screenwriter's shrug away from ending half their scenes with a pie fight.

However, a love triangle sort-of ensues between Rosenfeld, Prosser, and DiMaso—add Rosenfeld's captor wife, who will not divorce him despite his entreaties, and it's a full square meal of romantic intrigue.

Christian Bale's career: a story of dedicated acting?  Or the chronicle of a severe eating disorder?

This dynamic, driven by great actors and also Jennifer Lawrence and Bradley Cooper (who are, in fact, very good here), gives individual scenes a tremendous febrile energy that, always, always vanishes immediately back into the void, just as soon as the romantic subplot subsides and we're returned to whatever the hell the rest of this movie is about.

Then it's time for some dreadfully unexciting con artistry—in terms of narrative construction, there is one good twist in this movie about professional liars, out of what may be two twists total (but it's more like one and a half), and while it scans it's far too late, in a film that hasn't cared about its own plot mechanics at all, to really affect you.

Much more likely than anything good, then, will it be time for a goofy scene about DiMaso using a Hispanic man who doesn't speak Arabic to pose as an Abu Dhabi sheik; or for an equally goofy scene about beating up his boss with an ancient phone, which woluld be hilarious! if American Hustle were a fucking cartoon and designed as a pure comedy, with all these other things, like love and capitalism and ambition, left as an informing subtext rather than, ultimately, bolded supertext.

American Hustle is absolutely, graphically explicit with its central theme, America being the land of self-invention, and the con—conning each other and conning ourselves—being the only way to live, let alone live well.  And I liked this; I could have loved an exploration how each of the four principals is a creation of their own will to survive, and even how a mayor must lie and cheat to free his city from economic languish.  Even as it stands, their feelings, real, false, and ambiguous, are enough of the film, and at times presented with such acting prowess, that I can't tell you to actively avoid it; and the cinematography and sets are such an achievement that I still almost want to recommend it.

But then I'm reminded of what I said as soon as I left the theater.  I told her, "You know what my favorite part of the movie was?"  "What?"  "The fake 1970s production company logos.  I thought those were really cool."

I've got to be real now.

P.S. My second favorite part was another cameo, not the famous guy's, but Said Taghmaoui's as Irving's rejected choice to play the fake shiekh in the con, but who is an actual Arab.  You may remember him—in fact, you'd damned well better—from the second best turn in the second best picture of 1999, a movie I wish were considered the super-classic that it so is, Russell's own Three Kings.  Here is your career stability, my main man!
Posted by Hunter Allen at 7:02 PM