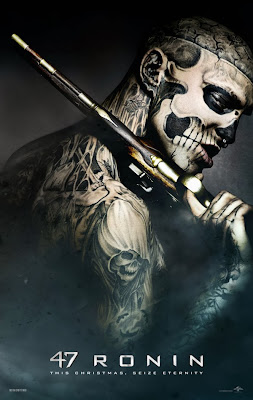 A lethargic if occasionally lovely slog through the legend of the forty-seven ronin, as tarted up by $175 million worth of Hollywood fantasy, and even though I know that I'm supposed to be totally offended by that, the fanciful nonsense parts are also by a huge margin the best parts.

Things could have easily gone the other way.  47 Ronin was pronounced dead on arrival in our theaters by Boxing Day, but I thought the trailers sure looked swell—it has samurai and swords and colorful costumes and computer-generated spectacle and an evil dragon in a movie that wasn't eighty hours long, and, truly, for what more could I ask?

Even more importantly, I am a contrary little shit, so when I walked into 47 Ronin, I did so with the finely tempered expectation of a decent flick that, like so many other films this year, others just failed to "get."

Well, sometimes you throw almost two hundred million bones at a TV commercial director and get a Tron: Legacy and the credit for introducing Joe Kosinski to the world.  Other times you get a 47 Ronin, and some serious questions about why you thought a naif like Carl Rinsch could pull it off, because while the man has by no means offered up the worst directed film of the year, he may well have given us the least.

Visual structure is far more the enemy here than visual content; Rinsch aimlessly meanders from cut to cut and scene to scene, and every time the art department and their army of click monkeys pour their substantial energies into the frame, those energies are allowed, by the direction and the editing, to simply drain away, leaving the audience wondering where the rising excitement they'd felt just a moment ago has gone.  The shame is that there are very beautiful and very thrilling things to be seen in 47 Ronin, from an eight-eyed CGI monster to the curiously disfigured monks of a bamboo forest to the fantastic landscaping of an actual country, that you can go to right now if you so wish, reconceived as something not dissimilar to Middle Earth (if not the Land of Oz).

In particular, one visual element of 47 Ronin, the color coding of the various noble factions, is a real chromatic treat. Indeed, this movie stars Penny Rose's costume design more than it stars Keanu Reeves' acting.  Her carefully chosen reds, whites, golds and chrysanthemum pinks for the Asano Clan—our side—are set off against the equally well-appointed dark blues, purples, silvers, and shiny blacks of Lord Kira's bad clan, while the shogun's forces wear neutral cyans and golds.  I mean, it's no Heaven and Earth, but if you don't care what's happening during the forty minutes it takes for the plot to get going in 47 Ronin—and it's very possible you won't—you can still look at all these human figures reduced to their team colors, just walking around on screen in their fabulously fussy uniforms, and this part is, no lie, pretty great. 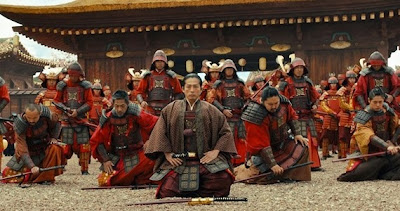 In the subsequent hour and twenty-seven minutes, unfortunately, they stop being samurai, start being ronin, and might as well start wearing potato sacks.

Yes, there are many novel and exciting images to be seen here, but only the design team seems to have understood and internalized this notion.  Occasionally cinematographer John Mathieson grasped it, as you'd pretty well expect from the guy who filmed Gladiator and Kingdom of Heaven for Ridley Scott.  But I can't know for sure if Rinsch himself ever did.

It's like a live action game of Shogun!  Remember Shogun?  Carl Rinsch doesn't!

But maybe I'm being too hard on the director, given that neither of the two scripts he was given to film are exactly amazing, and one of them clearly wasn't even finished.  (I infer, of course; but there might as well have been two scripts, and I honestly think it's not a bad theory.)

The first script is a direly serious adaptation of the tale of the titular forty-seven ronin.  It involves semi-historical Japanese people who lived in feudal Japan and operated under a code of behavior completely indigenous to that place and time.  In this film, they are played by Japanese actors, which is good, who are forced to recite all their lines in English, which is bad, but it is happening and it certainly can't unhappen now.

The head of Clan Asano is tricked into dishonoring himself before the shogun by assaulting Lord Kira, his guest.  Asano is required by the shogun to commit seppuku, but he might as well just let himself be executed like a common criminal for all the good it does: his estates get inherited by his daughter, who, as you might have guessed, is a girl, and as such—unlike an aristocrat who's never done a day of work in his life—is therefore not competent to manage what amounts to a large farm.  The shogun awards effective title to the lands and to the daughter to Kira, and the samurai previously employed by Asano are rendered masterless.  Young American audiences may be confused by the culturally alien ideas presented in this film, such as promises of lifetime employment; however, what we have learned from such films as Harakiri (either one) is that, as ronin, they now suck.  Determined not to suck, one of the ronin, Oishi, leads forty-six of his fellow former samurai on a death ride against the man who stole their livelihoods and honor.

The second script is a story that thinks feudal Japan is a fictional setting that involves a great deal of dungeons and/or dragons, focusing principally on Kai, a half-Caucasian orphan who has been outcast from polite samurai society, but was raised on the outskirts of the Asano estate thanks to the lord's generosity, and thus has plausibly come to be beloved by the lord's daughter, Rika.  When Lord Asano is killed by a shapechanging witch and Rika is stolen away by an evil rival, it is up to Kai to save her and the social order that hates him.

Imagine, if you will, that just the second script actually got made; then you couldn't get too mad at its co-option of samurai culture.

Because, for one thing, fuck the samurai.  The samurai class of Japan were barbarous monsters, subject to a barbarous code of conduct, neither better rulers nor better ruled than the militarized landowning classes anywhere, from the East European Plain to the American South.

(No need to actually read a book to confirm this: watch any samurai movie if you don't believe me, because it's what at least half of them are expressly about.  For the most explicitly damning I've had the pleasure of viewing, see Samurai Rebellion; centering around a doomed romance, it's the lesser known of the Toshiro Mifune/Tastuya Nakadai vehicles, but nonetheless I recommend it as highly as I would Yojimbo,1 despite a descent into some truly atrocious fight choreography in one of its two climactic scenes, but fortunately not the last onscreen battle between the two film titans.)

47 Ronin is also hardly the most egregious treatment of Japan as a zoo exhibit for white people to stare at that's happened to come to American theaters this year.  By contrast, 47 Ronin really does have a sense of admiration for Japanese culture and history, as opposed to thinking it just looks cool.  (Although, as I said in my review for The Wolverine, not that there's anything really wrong with that.)

And finally, this is low fantasy that just happens to take a foreign land's legends as its inspiration, which is rather more commendable than it is damnable.  47 Ronin's conception of early modern Japan is certainly at least as well-informed as to its setting than the many converse examples from the Home Islands that reach our shores.  I'm not familiar with any Japanese works that suppose the 18th century American frontier is infested with werewolves, which would probably be the nearest equivalent to the what this movie's done, but one need not look too far for examples of Western legends being used and abused in Japanese productions.

I'm not saying that because they do it, it's cool for us to do it too; I'm saying it's just the harmless cross-pollination of bullshit surface culture, so what's the big deal in the first place?  I am also saying I would totally watch that show about Natty Bumpo fighting werewolves; in fact, I think that's my main thesis.

Despite this mellow approach to the whole orientalism canard, however, when the second script's silly little story is mashed up with the first script's appropriation of what amounts to a central national myth, and then when a stentorian narrator portentously announces that the resulting goofball of a movie represents the breadth and depth of all Japanese culture, it finally rises to the level of a little bit offensive.

Then again, since the narrator's preposterous assertion is also one of only two lines in the whole movie that is funny, I guess I'll take what I can get.

Anyway, what's done is done, and with our two scripts now one, let no man tear them asunder: we shuttle between a boring, inaccurate retelling of the forty-seven ronin's legend and a truncated, shrugging version of Kai's story.  I know that these are six words no one has ever said, but I'll say them now with vigor: this movie needed more Keanu Reeves.

At the damned least it needed Keanu Reeves to learn his lines in phoenetic Japanese like Mifune did with his English ones in Grand Prix, so that the film might be given the illusion of cohesion behind the gauzy curtain of the language barrier. But, even more ideally than the total fantasy of a subtitled major American release (that isn't The Passion of the Christ), 47 Ronin needed more Reeves—that is, it needed more Kai—and less of whatever they thought was so important about the forty-seven ronin, because they're not communicating that importance.

Kai's movie, howver, does not fail to emotionally connect because of any deficiencies of its actor but because he's given almost nothing to work with.  He barely speaks or interacts, his emotional center in Rika is given like twenty lines tops, and, worst of all, what was almost certainly supposed to happen to Kai's character as a result of the choice he makes in his final battle doesn't happen at all.  The entire scene with the Tengu monks—the film's only true standout of an action-adventure sequence—was no doubt meant to foreshadow this, but they can't pursue this thread because Kai is part of this larger, unrelated story now.  Alternatively, Kai has superpowers, has no reason not to use them, never ever does until the very end, and this movie is retarded.

Something this movie also needed more of: the skeleton tattoo man.  He's on the posters and featured heavily in the trailer, and I wanted to see him, and I went to the bathroom for two minutes, and I missed him entirely.  I am so pissed off at you, movie.

"I got commitments on my time!"

At least I can tell you this: 47 Ronin doesn't cop out.  It ends as its genre demands it must.  Although it is, technically, a spoiler, I feel that it's better to reveal it than to conceal it: the ronin do die by their own hands.

And yet... this is a scene that can speak for itself, and a director, screenwriter, editor, actor, or whoever can only screw it up.

Well, I'm not going to lie to you.

So, on reflection, no, I'm not being too hard on Rinsch, because this transporter accident of a tale could nonetheless have been well told.

It's still probably the best movie Rinko Kikuchi has been in this year.

By a solid twenty-five minutes.

1 But not, crucially, Sanjuro, which is just too good.↩