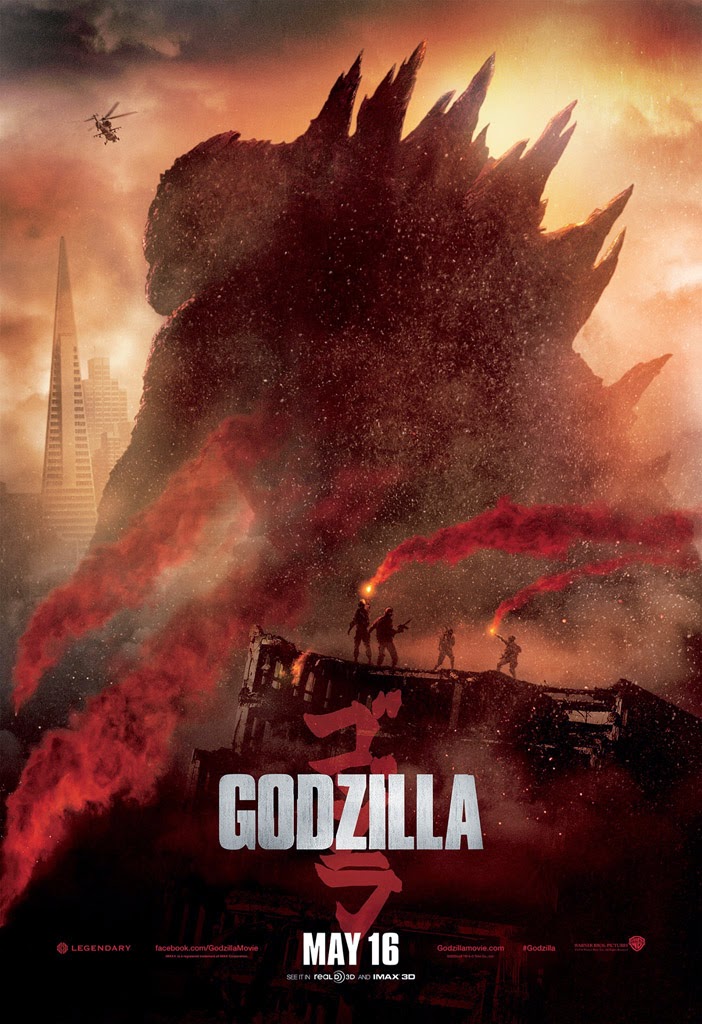 If you come in an hour late, you'll understand the movie just as much, and you may enjoy it more.  Otherwise, brace for a certain degree of boredom before Godzilla actually gets to anything you might have come to a Godzilla movie to see—but what sights they are.

Spoiler alert: high (I think it's moderate, but reasonable minds may differ)

There are individual moments in Godzilla that rank as the very best in the franchise.  One is so viscerally great that I uttered an audible expletive.  Discussing it would be worse than useless: you either already know exactly what I mean, or describing it would ruin your chance to experience it yourself.

But Godzilla is also an exercise in frustration, an inutterably cruel experiment in tease and denial, and a deliberate test of audience patience rarely seen in blockbuster filmmaking—and for damned good reason.  Almost no kaiju film has ever justified a running time in excess of two hours; very few even make the attempt.  Godzilla tries.  Godzilla fails.

I can think of only four kaiju movies even longer than Godzilla '14, and three of them are Godzilla: Final Wars, Pacific Rim, and, of course, Godzilla '98—a cinematic rogues gallery if there ever was one.  The other is King Kong '05, a truly excellent film—and a truly underrated one—albeit radically different in conception to the ordinary kaiju flick.  Nonetheless, Peter Jackson's monster movie remains a useful comparator.  Kong manages a compelling three hours, and does it based on two things: sheer spectacle and relatable humanity.

Spectacle is very much on offer in Godzilla, but not enough, and more importantly not soon enough.

The opening credits, radically reimagining the original Gojira, may be exceptional.  And a single scene, serving as prologue, is set amidst the bones of a fossilized colossus, instilling a sense of terror of the unknown world beneath our feet while evoking the vertiginous scope of prehistory better than any kaiju film I've seen since Rodan.  But going forward, Gareth Edwards' Godzilla continues to suggest deep time, just not in the way you'd prefer.

Godzilla himself is not fully revealed till halfway through the film.  In a sequence that promises to make up for the lost hour, we slowly pan up Godzilla as he towers above an airport littered with the burning hulks of jumbo jets.  He squares off with his foemonster upon the field of battle.  And Edwards, sensing that we may have become invested in his movie, immediately cuts to something else and never comes back.

Instead of a solid final hour of mind-melting 21st century kaiju action, Edwards expects us to be content to be unceremoniously dumped right back into the ongoing human story.  This is something I reckon he will come to bitterly regret.

The humanity of Godzilla includes Joe Brody, a nuclear engineer discredited after a Fukushima-like accident irradiates a large Japanese city and kills his wife.  It's not the seismological destruction of his plant which ends Joe's career, but his conspiracy-theorist pursuit of the truth he sees behind it.  He is convinced—and since this is a Godzilla movie, he is right—that whatever destroyed the plant, it was no earthquake.  Joe is portrayed by super-actor Bryan Cranston, and he brings a modulated anger to the obsession which has destroyed Joe's life.

Cranston's is one of two human performances that may evoke the mildest of emotional responses in Godzilla.  The other one is Ken Watanabe's: his role can be uncharitably described as "token Japanese," but his aphoristic pronouncements, though they might float above his scenes as if they barely share a context with the actual dialogue, are at least communicated with gravitas.

Indeed, Joe Brody is pretty easily Godzilla's most engaging sapient life form.  But this is not necessarily a high compliment, because Cranston demonstrates that it is far less difficult to play off a greenscreen than to do so against the colorless canvas that is, in this movie at least, Aaron Taylor-Johnson.

Taylor-Johnson is—if he must be assigned a species and not a part number—Godzilla's other principal human.  This is Ford, Joe's son.  Ford's an American ordnance disposal officer, just back from a vaguely-described foreign deployment, and now a family man himself.  I'm inevitably too hard on Taylor-Johnson—and if I thought she were worth talking about, Elizabeth Olsen, as his wife—but that is because I have rarely seen two emptier vessels passed off as characters in any motion picture.

Flat characterization may be rather standard for a kaiju film—the number of compelling characters in kaiju cinema that are not themselves monsters could be counted on one hand with a thumb left over—but never has a kaiju film expected the travails of so limitlessly bland an everyman to carry the majority of its scenes.

Perhaps this constitutes a very serious spoiler, but only because Warner Brothers has indulged in a marketing campaign tantamount to a very serious fib.  Given that this is, in truth, a nearly Cranston-free film, I feel that—in Joe's own words—you have the right to know.  Get settled in with Ford Brody: because you'll be seeing him approximately ten times as much as his dad—or Godzilla.

Yes, rather than Ishiro Honda's classics, it's Steven Spielberg's Jaws and Close Encounters of the Third Kind that inform the structure of Godzilla; perhaps, were it 1954, this might seem more impressive.  In any event, Edwards seems inexplicably unaware of that which permitted Spielberg to draw out his mysteries beyond any reasonable limit.  He understands—though he overplays—that glimpsing Spielbergian visual style.  Unfortunately, he completely miscomprehends the Spielbergian heart.

And there's not a little bit of Cloverfield in this Godzilla as well, with Edwards clearly inspired to attempt the ground-level, kaiju-as-disaster-film which Matt Reeves and Drew Goddard tried to do but failed thanks to their found footage conceit and their movie's resulting unwatchability.  But even the twenty-something scumbags of Cloverfield prove more relatable than Ford, simply by dint of being possessed of clearly human (if annoyingly human) traits.

So I ask you this: name something Ford likes or has an interest in other than his family (or bomb disposal).  If that is demanding too many dimensions of an action hero, then please at least quote me one of his lines.  Since I find it unlikely that anyone could manage to do either of these things, I finally defy you to give me one good reason why Ford is even in this movie—rather than his more-interesting father—other than the fact that, without Ford, you can't justify the red-flare HALO jump sequence, featured in early trailers, and which was also, I suspect, the scene around which the entire movie was written and shot.

Yet there is still far more to the picture than the life model decoys that populate its narrative.  Though Godzilla requires us to wait far too long for Godzilla to appear and to fight the dangerous monsters—unfortunately called MUTOs, rather than by a proper kaiju name—once the film's third act kicks in, we finally get the action we paid to see.  And it is indeed glorious.

The massive unknown terrestrial objects themselves are not, exactly, a triumph of kaiju design—with their oversized forelimbs and shambling gaits they recall, too much so for comfort, Clover—but they have far more personality than any giant monster we've seen since Andy Serkis' mo-cap Kong.  Plus, certain key elements of their design—their meathook arms, rectangular, glowing compound eyes, and sharp beaks—seem to be a conscious reference to, of all kaiju, Gigan, my own personal favorite Godzilla villain (and almost no one else's).

Theirs is a love story.

And I mean it: though it must register as yet another insult to the human players, the brief scene where the two MUTOs finally meet, and the male eagerly presents his nuptial gift of a nuclear warhead to his bride, represents the single best acting moment, bar no Cranston, of the entire film.

These MUTOs, digital cartoons though they are, are more demonstrably down to fuck than Ford and his wife are after being separated for fourteen months.  Honestly, they evince more simple affection than Taylor-Johnson and Olsen do; and when Godzilla arrives to kill them, the smaller male's desperation to defend his mate and offspring, despite being radically outmatched, is more convincing and vastly more sympathetic than our human lead's feeble attempts at the very same emotions.

Godzilla himself comes off well—though early opinion declared him too fat, and frankly this is somewhat true, his girth only underlines his terrifying physical presence.  If I have any serious aesthetic critique, it's that I don't care for the nose, the snubbest he's ever had.  Otherwise, the design is incredible, appearing much better in motion than in stills.

That said, in terms of character, he is ultimately far too heroic for the darker, grimmer, Gojira Lite tone Edwards has established.

The threat Godzilla poses to human civilization is more stated than it is observed, but he is hunted anyway.  In Godzilla's most bodaciously brazen idea, America's Cold War nuclear detonations in the Pacific—you know, the ones that killed real people, and inspired Gojira even more immediately than Hiroshima—were not tests, but active attempts to slay the monster.

(Incidentally, when Dr. Serizawa objects to a plan to nuke Godzilla again, I nodded in approval that the screenwriters recognize that there are pretty serious differences between kT and MT devices, although I had to immediately take points off for their historical illiteracy: Fat Man and Little Boy may have been comparative pop guns, but mid-50s thermonukes tended to be significantly more powerful than our smaller, more accurate modern nuclear weapons.  If the military couldn't kill Godzilla with Castle Bravo- and Ivy Mike-sized detonations, then I don't know why they'd ever think that a W87 pulled off a Minuteman-III would do the job.  But then, these are also the same tactical geniuses who are still deploying small-armed infantry to escort their tanks, as if they were fighting Iraqis in Baghdad, as opposed to a giant monster who might notice 120mm HEAT munitions, but probably isn't going to succumb to 5.56mm rounds, no matter how many you shoot at him.)

Granted, if that were a legitimate criticism, every Godzilla movie ever made would be beneath contempt.  But seriously, check out that dork in the Humvee.

Despite all this antipathy, Godzilla doesn't seem put out.  An apex predator, he is all about hunting down the MUTOs for their delicious radioactive meat; driven by his hunter's instinct, he appears disinterested entirely in our own species' fissionable piles.  Indeed, he seems to go out of his way to avoid destroying our stuff.

But, as a fighter of other monsters, he is in some regards the best Godzilla has ever been.  If his monomania also must render him something of a deus ex machina, nevertheless little is lost.  He is—eventually—the true star of his own film, and this is good.  And he has never looked this amazing.