The amazing web of the spectacular Spider-Man unlimited, part II: Not the superior Spider-Man 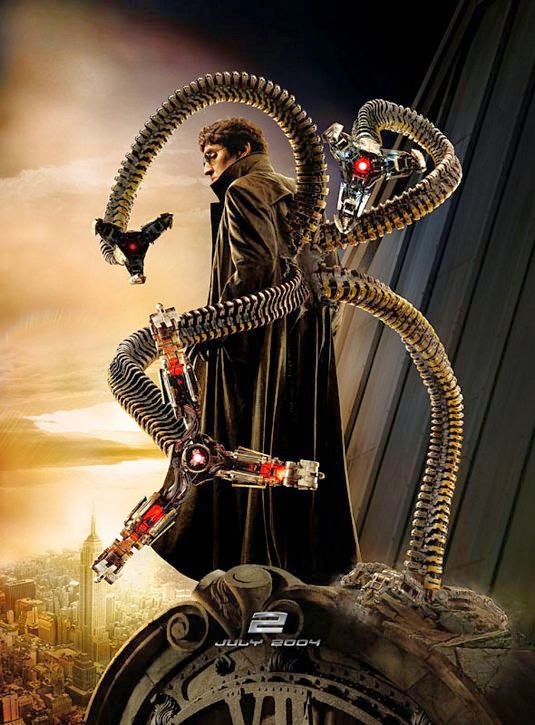 In celebration of his fifth cinematic iteration, this series of reviews is devoted to the only arachnid I wouldn't scream at and kill with poison.  Here comes the Spider-Man!

The bold new chapter in the Spider-Man saga does almost exactly what the first chapter did, except it does it much worse while looking much better.

Spider-Man 2 is widely beloved and, in certain circles, it's even considered better than its predecessor.  On two levels, this is defensible, though it is objectively wrong.

The first level is that Spider-Man, while taking pains to present Peter Parker before his spider-bite as an inveterate dork, buries that thread once he becomes Spider-Man.  Indeed, for much of the film he's not only being pursued, ultimately quite actively, by the hot hotness which is Mary Jane; he's also making his best friend, the heir to a multi-billion dollar fortune and portrayed by a young James Franco, feel like he's the inadequate one.

Spider-Man 2, on the other hand, is a film that spends a great deal of time on Peter Parker, the loser, losing.

And that's the core, some hold, of the Spider-Man concept.  Great responsibility coming part and parcel with great power is a fine moral fable, sure, but what is so uniquely compelling about Peter Parker is that he is the superhero whose life is neither awesome nor, for the most part, really poetically terrible.  Spider-Man is a fable about how to handle mediocrity.  It's even more to the point for Raimi trilogy's Spider-Man, where tragedy is largely impossible once past Uncle Ben.

Thanks to those awfully great responsibilities, Peter can't keep a job or stay awake in class.  (It prompts the question why he needs to be going to college right now in the first place, but in 2004 we could forgive his Orange County-like inertia—and, sadly, even today it remains What You Do After High School.)  He suffers for his superheroism: outside of his core group of billed actors, he's treated like he either doesn't exist or doesn't much deserve to; and by most of them he's treated like they actively wish he didn't.  About half of them take steps to ensure this.

Spider-Man 2 is really at its best when it's about Peter Parker succeeding only at being Peter Parker.  From its middling moments, like his relationship with M.J. built on mutual psychological torture, to its big moments, as when Harry Osborn contemplates his murder, it's all very good.  And in the longer, 2.1 cut, it's even better.

In its littlest moments, no more important to the overall scheme of things than a brief running joke at a ball Peter's been assigned to cover in his role as a Daily Bugle photographer, it is legitimately, if quietly, great.  Desperate for a drink, in a lighthearted sort of way, or at least a damned snack, Peter keeps trying to snatch a glass or an hors d'oeuvre off one of the roving waiters' trays.  When he finally succeeds, he takes a deep swallow of a martini—or the dregs of someone else's martini, anyway.

Now if it were Andrew Garfield, he'd have somehow secured every fresh glass of booze in the house, along with each tiny sandwich with a pick through it, and thrown himself a private shindig of grating self-satisfaction.  But highlighting the differences between the two actors' approach to the character is probably best left for the future.

Still: if this were my favorite scene (and it's close), it wouldn't be too unreasonable to suspect bad news coming.  But let's hold off.

The second, more obvious reason Spider-Man 2 is held in such high esteem is that this sequel is shockingly better-looking than the original.

Only two years had passed, but what a difference they made!  I found reason to complain, if with my tongue a bit in cheek, that the digital action in Spider-Man left something to be desired.  In Spider-Man 2, on the level of pure technical accomplishment, there isn't a frame to complain about.

Oh, but it's not all just better computers.  If the Green Goblin could compete with Ro-Man in an ironic costume contest, the eight-armed mad scientist of our feature today stands taller than most supervillains, and not just due to wirework.

Otto Octavius is rendered incarnate by Alfred Molina as a man advancing through middle age with a certain schlubby dignity.  He has a bad haircut and substantial breasts, but clearly cannot be bothered to care, for he is far too satisfied with being so brilliant.  He becomes our good Dr. Octopus when, as they do, an experiment on the frontiers of super-science goes awry, and a quartet of powerful mechanical arms with their own artificial intelligence is fused into his central nervous system.  These are sometimes CG but only when necessary; when they're not, Moe, Larry, Curly, and Flo (as Molina dubbed the arms) were puppeted by four people apiece.  Yet their combination with Molina's own movements is so immaculate that the thought would never enter your mind; it may be the most perfectly communist performance in the history of film, beating out Jabba's collective of operators in Return of the Jedi.

The arms let Raimi indulge in his most primal of Raimisms: in the film's best and darkest sequence, they awaken while Otto himself is sedated, and rush headlong like Deadites to preserve the connection they've forged with their host from the efforts of the surgeons who seek to separate them.

The screen itself can't hold Doc Ock, necessitating the switch from 1.85:1 and its widescreen pretensions to the 2.35:1 aspect ratio.  Scope's not always better, but it marks an improvement for this franchise—there's something to the panorama of Spidey swinging that just looks better the wider it gets.  For Spider-Man 2 itself, the highly linear environment of the film's action centerpiece suggest Scope as not just ideal, but obligatory.

I'm sure there's probably some kind of limit but this sure as hell ain't it.

Likewise, Spider-Man—when the limitations of the physical require a turn to the virtual—appears vastly better rendered.  So much so, that while I am sure there have been many highly technical advances between this and The Amazing Spider-Man 2, when Doc Ock and Spider-Man throw down no real qualitative gulf separates the two films.  The rightly famous el-train scene, seen above, is unusually stunning even today—even if it is far from perfect.

Its most glaring flaw is Tobey Maguire's sudden contraction of face cancer in the midst of shooting its climactic moment.  He recovered but the scars remain to this day.

The subtler problem isn't limited to the el-train rescue; it's absolutely systemic.  It has nothing to do with technological competence.  It has everything to do with the unfortunate decision to treat these bodies, now largely animated, with so little consequence that even Chuck Jones would be proud.

Spider-Man, we know, is a creature ennobled by radioactive blood, whose flow grants him the strength to lift a mid-sized sedan with only mild strain.  It follows inexorably that, for the man of ordinary resilience, to be punched in the head by Spider-Man is to no longer have a head.

The fights between Peter and Otto—whose skull is of the eggshell variety in comparison—lose this sense of proportion, and forget entirely about the proportional strength of a spider.  Thus, no matter how kinetic, they become a meaningless contest between self-evident cartoons.  A single blow should end their battle—and the inherent drama to it should be the tactical difficulty of landing any blow in the face of of four indestructible, swarming cyborg arms.  Instead, Spidey gets too close, too easily, and wails endlessly on Ock's face, like a punching bag made of solid rubber.  This chagrins Otto, certainly; but little more.

Even Spider-Man himself, his charms as a superhero bound up in large part by the very moderation of his superpowers, falls victim to Raimi's overreach: while on the train, he smashes chin-first into metal obstacles at a hundred miles an hour, to utterly negligible effect.

Too visually enthralling to ever quite becomes tiresome, it's more frustrating for looking so cool while all its potential is wasted on thoughtlessness.  But, as we established in our last part, enthusiasm overriding consideration is, unfortunately, the indelible signature of Raimi's series.

It could still all be entirely forgiven as the camp excess of a man who just wants to push everything he can to the utmost—except there remains the even more troublesome matter of Spider-Man 2's main plot.

The injury here is the prominent place given in the story to Otto's grand experiments in controlled fusion.

Oh, I don't know.  Other than the heat, the neutron flux, and the fact they're letting him do this in downtown Manhattan, it seems perfectly sound.

It's so unbelievably retarded, and on so many levels, that I know it's intentional, and some part of me can appreciate its homage to the science fantasy of old.  But there is the necessary silliness you need to establish the premise, like Peter Parker's own transformation, and then there's this: a transcendent stupidity that seems to exist outside of space and time, self-creating and eternal.  And, perhaps even more annoyingly, only in Spider-Man 2 could the invention of fully-functional cybernetics and a conscious AI be met with such pronounced disinterest.

But the insult of Spider-Man 2 is far worse.

It's not escaped everyone's attention that The Amazing Spider-Man wasn't the first remake of Raimi's original.  Down to some of the smallest, most creepy respects—Kirsten Dunst still has nipples, everybody!—and yes they are lovely—Spider-Man 2 self-plagiarizes with neither shame nor mercy.  (Or, more to the point, the army of writers on Spider-Man 2 plagiarized David Koepp, whose absence from the credits is made practically obscene as a result.)

Otto Octavius is a scientist that Peter comes to trust and respect and project his daddy issues onto, who suffers an awesome laboratory accident that induces a form of multiple personality disorder, and ultimately the voices in his head convince him that a life of crime is a pretty good idea.  Sound at all familiar?

The balls on these people must require them to order specially-tailored shorts.  People talk about repetition in sequels, but rarely has a franchise repeated itself down to such fine detail—not even, as Christopher Orr pointed out at the time, Raimi's own Evil Dead 2.  Even ignoring how lazy it is, it's not better in any respect to the Green Goblin story it's retelling, either.

If it's any consolation, there are worse things to be than "not as good as Willem Dafoe."

Finally, I'd discuss Peter's psychomatic loss of powers, but I promised myself that I would make it through all five movies without making any terrible jokes about the resemblance Spider-Man's web-slinging has to ejaculation, and Spider-Man 2's time-wasting subplot means that the only way to win that game is not to play.  (But I do have to note that while he rightly really wanted to save Mary Jane, Peter's subconscious apparently didn't care if that little girl lived or died, and I'm not sure that's what the writers wanted to tell us, but it is, I'm afraid, what they did.)

It'd be natural to come to the conclusion that I actively dislike Spider-Man 2.  The fact is that's pretty far from the final impression I want to leave.  Indeed, Peter's civilian sections would be quite good enough to buoy the project even if it were an unmitigated disaster; and as a pure image, Dr. Octopus, far more than anything to be found in Spider-Man, demands you to witness him.

Spider-Man 2 has the whiff of hackwork to it, to be sure; but at least it's ripping off one of the best.