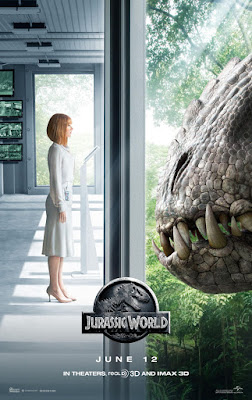 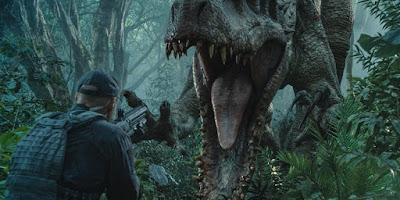 As long as copies of The Lost World exist, it shall be difficult to credibly claim that Jurassic World is either the worst or the stupidest entry into the Jurassic Park series, though it is both rather bad and very stupid.  I have a much more serious condemnation for it anyway: it is, by an enormous margin, the least fun.  Burdened by adult characters who make Ian Malcolm look cool and a pair of kids who make Lex and Tim Murphy seem endearing, along with ragged pacing problems and an attitude that often borders on perfunctory, it's the first film in the franchise that I could walk out of and say, "You know?  That was kind of boring."  So now one has to ask: "How the hell is that possible?"  After all, Jurassic World is an excuse for 20,000 walking meals to find themselves trapped on an island with genetically-engineered monsters, rendered with all the resources of 2015, and with fully three previous films' worth of triumphs and tragedies for it to learn from.  The mind rebels at the prospect: boring is the last thing this movie could be!  But boring it is all the same, although in fairness it is punctuated by happy moments where random people do, indeed, die.  A few highlights even match the accomplishments of the original trilogy, and the filmmakers at least had the good sense to put the best of them at the end, where it could do the most good.

Yet the question "Why is Jurassic World something of a dull slog?" can be answered quite readily, and I've already answered in summary, but it bears repeating: World's narrative flaws are so obvious and so severe that it's hard to believe four people were still willing to take credit for them.

One trap is already built into the film at the conceptual level, and though it might have been easily avoided by a sure directorial hand, Colin Trevorrow doesn't offer one here.  A fully-functional dinosaur zoo is a blindingly obvious follow-up to the catastrophe of Hammond's park in the first film, and it is also a legitimately great idea.  Only here, it's mangled in its execution, when Trevorrow lets the one thing that could fuck it up happen: the failure to give much of a shit about Jurassic World's frankly miraculous existence.  Desensitization to mundane wonders is a useful character trope that goes back in science fiction practically forever, but it's rare that a film itself takes its workaday characters' side and agrees, "No, there's nothing to see here, in the exploding heart of the sun."

The sour commentary on the spectacle arms race inherent to industrialized blockbuster filmmaking—which is one of the few things the film has going for it on any level beyond its basic PG-13 grand guignol appeal—isn't missed.  Unfortunately, it's also as blunt and harmless as it could be, relying on desultory piss-takes like the jokes about naming new species after corporate sponors—the writers apparently failing to realize that this is actually a pretty good idea which, had they run with the Verizonosaurus rex as the villain of the film, might've added some measure of real bite to World's sub-satirical roar.  Trevorrow's moaning over contemporary cinema's hedonic treadmill manifests a lot more forcefully—and, unsurprisingly, a lot more tediously—in the form of one of our requisite kids, a realistically sullen teenager and hence one of the least desirable characters possible, whom we are invited to watch nervously leer at girls and take phone calls, rather than the dinosaurs his often-offscreen little brother is busy being awed by.  The criticism only really lands when it works in tandem with the genre film in progress—that is, when it's put in the mouth of Dr. Henry Wu, who storms into the proceedings to yell at the audience for being satisfied with inaccurate paleontology as well as to enunciate the obligatory God complex.  B.D. Wong gives us promethean splendor, the film's solitary worthwhile performance, and for 30, maybe even 40 seconds, manages to conjure up the spirit of the amazing matinee experience Jurassic World should have been.  This must be why, afterward, Wong gets bodily ejected from the movie: for making everyone else look even worse than they already did.

But anyway, simple failure to pursue its themes in a particularly compelling manner?  If that were Jurassic World's big problem, it'd be a relief.  It's not even in the top five.

Effectively, what we have is a film telling two stories for its first two acts, neither one of which is any good, both undermining the other, and, when they finally interweave in the final act, coming close to outright annihilating each other.  The first story, which had a shot at working, is the kids' adventure, featuring Zach, that sullen teen, and his brother, Gray, who exists somewhere on the functional side of the autism spectrum, rattling off numbingly useless quantitative factoids that Raymond Babbitt would've had a hard time mustering an interest in.  They get packed up by their divorcing parents over Christmas, and apparently finally arrive to stay with their Aunt Claire sometime after New Year's, given the pointed lack of any Xmas-theme at the dino-park.  While they putatively enjoy Jurassic World, Something Is Going Wrong on the margins, and—inevitably—they put themselves in great peril through their inherent kid shittiness.

It's a solid enough grounding, theoretically, but fatally diluted by the other story, in which we are made privy to every step of What Is Going Wrong through Aunt Claire, whom we know better as Claire Dearing, Jurassic World's operations manager.  She gives her nephews free VIP tickets to the most awesome place on Earth, and makes plans to have dinner with them, but only after she's finished for the day.  Overlooking her costuming and businesslike demeanor, this is our first clue that Claire is an icy bitch, and in dire need of redemption.

What's that?  That's the dumbest thing you've ever heard?  I haven't even got to the part where someone wants to draft raptors into the army!

Claire's got grown-up problems right now: Jurassic World isn't meeting shareholder expectations.  People just don't care about dinosaurs anymore, it seems, thanks to their cat videos and social activisms and Tinders.  Taking desperate measures, Claire is overseeing the final preparations for the unveiling of a brand new dinosaur, dubbed Indominus Rex—everything nasty all rolled up into one giant, genetically-engineered package.  (And yet, in its overwrought conception, it's not all that impressive.  I expect the only new dinosaur—well, prehistoric lizard—that stands a good chance of capturing the audience's collective imagination is the outsized rendition of Mosasaurus at Jurassic World's ludicrously-conceived marine paddock.)

Just when you thought it was safe etc.

Meanwhile, independent contractor Owen Grady, who will become in very short order the most repellant character in the entire franchise—I know, "holy shit" is right—is assessing velociraptor intelligence for InGen.  His old military boss Hoskins, in particular, is convinced that the objectively terrible results of Owen's training sessions point the way toward the weaponization of raptors... and, well, like I said, at this point the script reaches the point of no return and keeps going, into absurdities undreamed of.  How it possibly survived the ministrations of who-knows-how-many script doctors boggles the mind; surely one of them must have asked, "You do know that at all the places like this that have ever existed in real life, they already have animal trainers on staff, right?  Why doesn't Chris Pratt just play one of those?  Does the Aliens angle even serve a narrative purpose?"  And the answer to that latter question, obviously, is a big "no."

Claire seeks Owen out for a consult on her Indominus.  Pulling double-duty, the sequence underlines the inevitability that they'll end the film together—a dubious prospect soon made practically obscene by the extraordinary dynamic they bring to their budding "relationship," best described as "hateful contempt, ribboned with profound sexual indifference."  Starting here, they—and in particular Chris Pratt, whom I have never seen be worse—take the script's alleged banter and strip it of anything remotely resembling romance, or even humor.  Material meant to be cute turns into the meanest, ugliest, spikiest version of itself, to the extent I'm half-surprised he never punched her in the face.  Maybe he was just busy, for as sure as the sun will rise, the Indominus soon looses its bonds.  Claire strikes out to rescue her nephews, bringing Owen along.

Now we are treated to Jurassic World's famously endemic sexism, which if Trevorrow hadn't come out and basically explained, "Yes!  That was exactly what I was going for!", I'd have interpreted a bit more charitably—that is, as a director tricking a film studio into giving him $150 million for what amounts to a fetish video co-starring cartoon dinosaurs.  Properly speaking, that's a joke; but as a hypothesis, it's so embarrassingly easy to support that—hell—it might even be true.  After all, hardly a scene can pass without those glaringly unnecessary insert shots of Claire's feet in heels appearing in the montage, or that gratingly exaggerated CLACK-CLACK against concrete rising up into the sound mix, or her choice of footwear being elevated into the text as the key character trait of a woman whose single most heroic moment is heralded by the line, "Be a man for once in your life!" 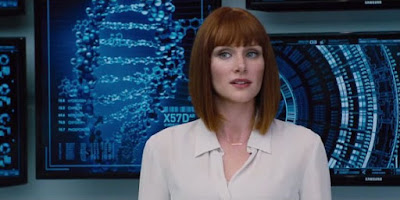 I've seen movies like this before, and they really weren't my scene.

I honestly lost track of the number of times the script puts compliments into other characters' mouths to build up Owen Grady—whose actions, truth be told, stand perfectly well on their own in terms of badassery, notably how he avoids being smelled by the Indominus—but having a Greek chorus of annoying children shriek his virtues into my ear can have only one reaction, and that's resistance.  (When Claire finally does take matters into her own hands, reuniting with her nephews in an action beat that the film couldn't avoid recognizing as awesome if it tried, the screenplay corrects almost immediately, having the little bastards fawn instead over the raptor-training ex-Navy survivalist—whom, recall, they don't yet know trains raptors, was in the Navy, or has any survival skills at all.  In fact, the only thing they do know about Owen at this point is that he wears a sleeveless vest without irony and can't bench press the cat-sized, hollow-boned pterosaur that was going to bite off his face before Claire saved him.)  It eventually reaches the point that Owen's very presence becomes nearly unbearable, and one begins hoping that the series' traditional unwillingness to kill core characters might be relaxed in Jurassic World, alongside its commitment to pretending to showcase genuine-article dinosaurs.

I want to be just to Jurassic World, and not simply let my disappointment in the thing have me declare it worse than it is.  The dinosaur action is certainly strong enough in spots—though, in truth, I think I've mentioned almost all of them, forgetting only that too-brief bout with an ankylosaur, without really trying.  Still, savage cuts to its runtime and subplots might have rendered a creature-feature worth recommending, even recommending strongly, abysmal live action elements aside.  At two hours, though, it tries your patience; and when it finally gives you your reward, they follow it up with a denouement that makes you feel dirty and used.  Not unlike a pair of tasteful nude pumps, I imagine, after a night at Colin Trevorrow's house.