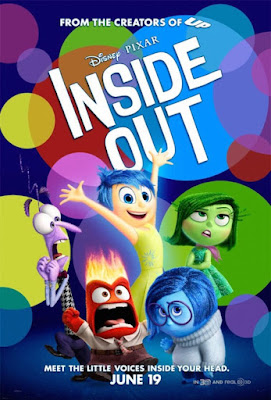 Pixar returns with an adventure inside a little girl's head that is extremely cute, irrepressibly sweet, and (up to a point) psychologically insightful, but which is maybe the teensiest bit too muddled to be hailed as an instant classic.

Riley is a normal 11 year old girl.  She loves her parents, her best friend, and her hockey-centric life in Minnesota.  And like anybody, her feelings are ruled by an anthropomorphic emotional junta.  Their job is assigning an emotional charge to Riley's incoming sensory input before it reaches long-term storage in the fathomless depths of her noggin, and when something really important happens, they're in charge of curating the core memory it creates—turning them into the key components of Riley's personality, which manifest within her brainspace as enormous exhibits centered around the appropriate theme.  (And, yeah: it's arcane enough I rewrote this four times to make sure I got it even close to right, and I'm still skimping on many details; yet, rather miraculously, it's never once confusing in the film itself.)

In the particular reductive psychological schema deployed here, Riley's basic feelings number five: Fear, who keeps her safe from bodily injury; Anger, who makes her stand up for herself; Disgust, who keeps her away from dangerous elements, both physical and social; Joy, who grants her optimism and turns her toward the cool things in life; and lastly Sadness, who, it seems, ruins anything she touches.  I award zero points for guessing correctly that it turns out Sadness does, in fact, serve a very important life function. 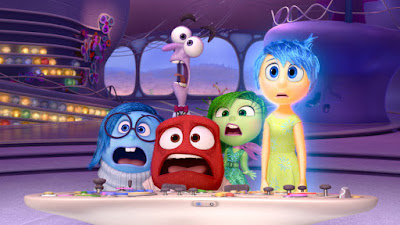 (Perhaps it is most advisable, however—if one values one's sanity—to not consider the infinite regress inherent to Riley's feelings, who despite their types clearly have discrete feelings of their own; but how the screenwriters avoided the awful temptation to render every child in the audience a drooling mess of blown wiring, I can't even say.)

Things are good for Riley in Minnesota, but they're set to change when her father moves the family to San Francisco to pursue his entrepreneurial dreams, evidently without the least regard for Riley's welfare—so all of this seems to poor Riley, anyway, whose perspective we rarely leave.

Sadness, who's been skulking about, makes her unintentional bid for control of Riley's mind in the days after her arrival in the unforgiving city.  Between a dilapidated house, inedible hipster cuisine, and a humiliating first day at school, everything gets mixed-up in her head.  The confrontation between Joy and Sadness leads to their accidental exile from sensory headquarters and into the further regions of Riley's brain, leaving her dead in terms of either joy or sadness.  Riley's consigned to the inept thrall of Anger, Disgust, and Fear, and though they do their level best, they can only make things significantly worse.  Inside Out is thus the story of Joy and Sadness' perilous journey back into conscious existence; and it's the story of a young girl's journey through a depression that cannot be hurried along, and certainly cannot be forced away.

In other words, it's an allegory so literal I don't even know if that term can really apply.  It's also an incomplete one lacking rigor, and that's as brass a way to say that it's a problem in Inside Out, which has a few of them, despite the raving positive reception that it has, more or less, earned.  (Yet a "return to form" for Pixar it couldn't be, for it's certainly less good than Monsters University.  Admittedly, those of us who love that movie more, or at all, do appear to be comparatively few. Of course, for me, Pixar's output has otherwise matched its vaunted reputation only in the Toy Story franchise and the works of Brad Bird, anyway.)

The many set-piece elements of Joy and Sadness' existential road trip, fundamentally necessary for this to work as a narrative film, oscillate between those that dovetail with the underlying concepts perfectly—like Bing Bong, Riley's half-forgotten imaginary friend—and those which seem as bafflingly arbitrary as anything I've seen in recent memory—like the climax, with a final puzzle-solving crescendo that sweeps you along (fittingly enough) in the emotion of the moment, but possesses all the lasting resonance and metaphorical import of a particularly fiendish round of Barrel of Monkeys.  It's bound up by a production design that can swing from the inventively beautiful to the haphazardly slapdash at a moment's notice, although to the extent it also represents a small child's psyche, I suppose this is appropriate.

Meanwhile, the character design is nearly uniformly superb.  The emotions are gorgeous creations, crafted of thousands of tiny beads of glowing light that have coalesced into humanoid forms.  My favorite is Disgust, though to what extent this is a result of her deviously clever conception—identifying the same root emotion as a guardian against chemical poisoning and as an internalized sense of social shame—I can't quite say.  I do not, however, particularly care for the look of Anger, who as a yelly salaryman stands out even in this crowd as especially obvious.  (But let this not be interpreted as a knock on Lewis Black!  For he, along with every other vocal talent in the whole picture, is doing God's work, particularly Phyllis White as Sadness, who receives and delivers almost all of the film's best lines.)  I shouldn't neglect to call attention to the animation itself, lovely indeed in terms of light and color—though again, it's no Monsters University, let alone is it a Tangled—but it's also up to some very neat tricks which I oughn't spoil.

The other big problem, much more avoidable, and thereby much less forgiveable, is entirely inherent to a decision that should have been killed at the moment of conception.  Self-evidently against the entire grain of the project already, it is so terribly misjudged in its execution that it might feasibly have set the projector on fire.  We rarely break from Riley's perspective, I said; which is tragically distinct from never.  In key moments we rush from the innards of Riley's skull to visit with the central committees of several adults; and, particularly, those of her parents.

When I say that Inside Out is a funny movie, I mean that I chuckled pretty much all the way through; and it is a funny movie, despite a few outright groaners, such as (of all things) a Chinatown "joke" as lazy as any in recorded film history—and which, as a manifestation of Riley's inner life, manages to disturb on two additional levels (an 11 year old has seen Chinatown; and a movie about an 11 year old girl references Roman Polanski).

But, then, there is the showstopper, the literal head-to-head confrontation between Mom and Dad.  It is not only suggestive of the face-meltingly horrifying possibilities inherent to applying this premise to adults in even the most marginally realistic of ways; it also showcases a willingness to indulge in the rotest, grossest gender-essentialist comedy of 1958.  It is a uniquely outrageous failure of tone: as cinematically brutal as it gets in its insistence upon its own hilarity, matters are made worse when it keeps whipping back to Riley's genuine anger and confusion.  The resultant mess is so savagely unfunny that it pollutes downstream for miles and miles, going on a solid ten minutes, during which I was still so terribly enervated by it to laugh, or really to feel anything, except a deep red annoyance that it had ever existed. 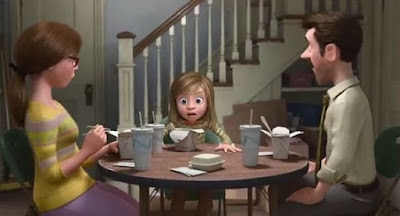 To set the scene: Dad realizes Mom wasn't listening, because she was too busy thinking about shoes, so he passively-aggressively fantasizes about the hot 18-year old Thai girl he met on sex vacation, and wishes he'd married instead.  OK, that's not exactly what happens, and yet I didn't change a single essential detail.

The scene also serves to raise the question of how it happens that Mom's emotions are all feminine, Dad's are all masculine, and Riley's are a mix of three girls and two guys, without addressing it at all, and whether that's fascinating or maddening, I can't tell.  In any event, the intra-credits fun stuff that employs the same conceit is, I happily acknowledge, legitimately funny and represents a canny use of the idea, but works at all because it's in a context where it can freely exist outside of the film proper.

Despite the outsized impact this one terrible sequence had upon my own enjoyment of the piece, it's altogether a very small fraction of Inside Out: the far greater proportion is devoted to the exercise of Pete Docter's patented technique for making you cry, or rather for making you wish you weren't in a public space with your girlfriend and her buddy, so that you might be permitted to cry without violating our crushingly oppressive social mores.  Docter, you well know, perfected his trade as a professional tearjerker back in 2008's Up.  It is a film I barely like and have virtually no use for outside of its devastating prologue, but which nonetheless managed to make me cry throughout its whole cursed runtime; indeed, whensoever he commanded it.  Inside Out does the same thing, and is the superior platform for Docter's diabolical emotional experimentation.  Coming as it does in explicit terms of agony, ecstasy, and all the rest, it's necessarily at something of an academic remove from the immediacy and rawness of human emotion—but, somehow, you still experience it as just about too real to bear.

Inside Out is not Pixar's Second Coming; we got raptured two years ago, and you just missed it.  But it's a heck of a thing, and if you haven't seen it by now, I have no idea what you're waiting for.

P.S.: Inside Out is preceded by the short film "Lava," a love story about two lonely volcanic islands.  It is somehow much worse, yet less interesting, than its stupefyingly awful premise already implies.  It is the kind of bad that you never thought you'd see from a high-caliber animation studio, where the littlest thing requires a hundred work hours and has to be cleared by dozens of personnel: "Lava" began with absolutely no right to exist, and in the space of seven minutes that feel a lot more like seventy, it never finds one.  Virtually anonymous animation combines with a noodling ballad based on the English language's worst wordplay and which would've gotten booed off the quad at a mid-tier university in 1998.  If it does not hold the title of "worst thing Pixar has ever done," I never, ever want to see what does.  Score, for what it is:  0/10
Posted by Hunter Allen at 2:16 AM