Cardboard Science: The movie is nothing but ropes and asses! 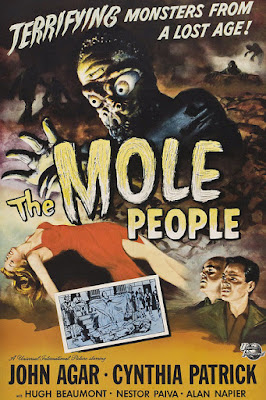 An archaeological adventure with more on its mind than it seems, The Mole People wasn't consigned to the dustbin of cinematic history for no reason, but it deserves to be pulled back out, for it offers not just the lowest-fi kind of genre fun, but a good message. 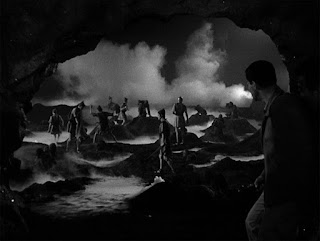 For as stilted and slapdash as it quite undeniably is, producer William Alland and director Virgil Vogel's The Mole People remains memorable.  Maybe that's because it's nearly the platonic ideal of 1950s SF.  It opens with an introduction from a scholarly old man who pontificates upon science and the science-adjacent territories; it stars a John Agar whose smugness rips right through the confetti of a basically humane character; it offers a goofy matinee adventure scenario, but arrives there only after many minutes of bumbling across a mountain; it features a romance that springs fully realized from oblivion; and, of course, it has something to say about equality, while populating itself exclusively with either white people or literal monsters.

Naturally, few of its formal elements rise above the purely functional.  True, some of the enveloping underground darkness is interesting to look at, but let's get real, we're not exactly talking The Descent here.  The biggest exception is Clifford Stine's special photography.  Intermittently, his images stand out as sublime—not the least bit convincing, of course, but wondrously impressive by way of the enormous challenge their technical complexity implies. 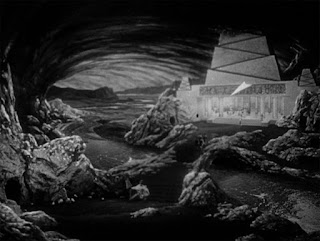 (We recognize that a taste for the spectacle of 1950s B-movies is an acquired one.)

And yet beyond Stine's customary magic, there remains much Before Times charm to the piece, so much that it's difficult to actually dislike it, or even recommend against it.  It has a ready digestibility and—putting all our cards on the table—the movie is also only 77 minutes long, which helps enormously.  It's a perfectly nutritious meal, and between helpings of more-accomplished SF films, it'll do.

Then again, the only reason it exists at all is because Alland had the idea to do a movie with a lot of stock footage, like Columbia's latest Ray Harryhausen joint, It Came From Beneath the Sea, except without all the expensive parts that the use of stock footage justified.  Alland gave screenwriter Laszlo Gorog the directive to come up with a narrative that would support this endeavor by whatever means necessary, and that's what Gorog did.

It would be a criminal omission, however, if we just jumped into that narrative, without spending time with the most salient of The Mole People's charms, Dr. Frank Baxter.  Baxter was an English professor at USC—the good one—recently given a wider audience as the gesticulating host of The Bell Laboratory Science Series, AT&T's famous stretch of educational films.  (Via Youtube, I've seen Gateways to the Mind, but only bits and pieces of the others.  In one of them, Baxter raises the specter of climate change—in 1958.  Good thing he warned us in time!)

Baxter appears here in an equally expository role, perhaps better suited to his liberal artistry: guiding us through the comparative mythology of the subterranean realm.  By way of his ungainly lecture, we hear tell of Gilgamesh, Orpheus and Dante, before moving on to the 19th century and its even dumber theories of a hollow Earth.  Baxter displays a seemingly genuine enthusiasm for the sincerity with which people can believe stupid things.  Upon The Mole People's conclusion, however, enthusiasm is shaded with mockery.  The film takes dim view of this kind of imagination, observing how easily it can be captured by superstition and dogma. 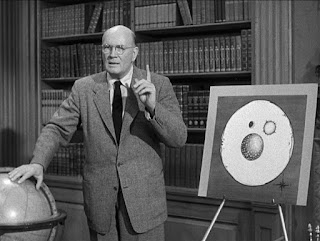 At the foot of Mt. Kuhitara in the Himalayas, we find our heroes, Drs. Bentley, Bellamin, LaFarge, and Stuart, digging in the dirt, as archaeologists are compelled to do.  Their investigation takes a turn when they find a tablet with cuneiform markings, identified as 30th century B.C. Sumerian—a very curious event indeed, since they're about 2,000 miles east and 8,000 feet up from Sumer, and therefore in just about the last place anyone would ever expect to see one of their artifacts.  But as Bentley tells his disbelieving associate LaFarge, "In archaeology, nothing is impossible."  I've seen the Indiana Jones movies, so I know he's right.

As soon as they've deciphered the inscription—a dire warning, of course—an earthquake comes to underscore the foreboding atmosphere and smash the tablet, rendering their studies fruitless.  Only the audience takes the hint, however, for the quake dislodges another impossible improbable artifact, brought to the foursome from atop the Kuhitara plateau by a pliant brown boy.  This new find leaves Bentley drooling: its engraving relates the Sumerian version of the Great Flood—the tale of King Sharu and his ark.  Bentley, sensing the shape of a great discovery, bullies his team up the mountain, much to LaFarge's chagrin, especially. 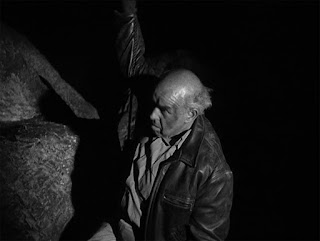 (Regrettably, stock footage ensues.  Clumsy cuts suggest more than demand that we identify Agar and company with the dissimilarly-dressed strangers climbing an actual mountain.  It doesn't last all that long, and the result is more engaging than numbing, but it would take a very broad definition of "thrilling" to call it that.)

Arriving now atop Kuhitara, the team discovers something that really shouldn't be there—the ruins of a temple dedicated to Ishtar.  Almost before they can ask where the city is, events conspire to kill Stuart and their local guide, trapping the three survivors beneath the earth.  LaFarge's cowardice slides into a jibbering freakout; Bentley and Bellamin maintain a semblance of science heroism; and, as you've probably guessed from the title of the movie (if not the obvious set-up), more is going on underground than they could imagine.  Unfortunately, Mole People, committed to its mystery but bereft of the skill and money to keep it going, now finally indulges in some serious padding.

Eventually, the band emerges into a great cavern, carved by a flowing river, lit by a phosphorescence in its walls—and home to Sharu's distant descendants.

Fifty sunless centuries on, these Sumerians have evolved into mushroom-swilling albinos.  Constrained by their environment, they've become as rigidly conservative as any society could be, maintaining a hidebound cult of Ishtar and, terrifyingly, a slave race descended from their servants, called the Beasts of the Dark—the monstrously degenerate mole people, who skulk about the tunnels when they're not being whipped to death in the literalized hell of the mushroom fields.  Even more importantly for our archaeologists, the Sumerians adhere to strict demographic discipline: 150 people, no more, no less.  153?  Three too many.  Only Bentley's flashlight, of all things, saves them, for it blinds the Sumerians.  Their torch is identified as the Fire of Ishtar; its wielders as her emissaries. 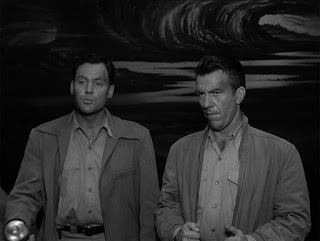 When someone asks you if you're a god... take a page from John Agar's book.  Say "What gave it away?", and then roll your eyes.

All the elements are here now but one: Adad, the servant girl to whom Bentley takes a shine.  She was born with the "mark of darkness" upon her—that is, with the ordinary mild melanization of a blonde Aryan woman, such as were popular in Hollywood in those days.  In her society, however, her complexion has consigned her to a station nearly as low as the mole people.  Presumably, you get it; if not, it means you're cognitively unable to process metaphors.  In this case, I direct you to (ever-so-slightly) more literal films, like Imitation of Life.

Mole People picks up at this point, serving two masters at all times, but serving both well.  It is, on one hand, an achingly programmatic underground adventure, with everything that entails: orientalist production and costume design that was already inexpensive but comes off as just deliriously cheap (particularly in the inexcusable decision to re-use Egyptian backdrops from some other movie for a Sumerian temple); an exploration of fake exotic customs, up to and including virgin sacrifice (friend, we're not close to done with padding, unless you don't consider crappy, self-evidently exploitative dance sequences, that probably didn't even seem ribald at the time, to be "padding"); and, of course, evil priestly intrigues and awkward action scenes and, yes, actual underground monsters. 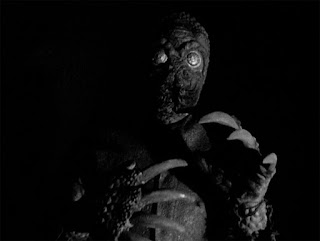 On the other hand, is that race allegory, very possibly the most in-your-face race allegory there is that is not the subject of a Star Trek episode—and, nauseatingly, one that retains enough currency today to still be described as "relevant."  Before we go any further, let us recognize that its use of the mole people as a stand-in is shockingly blunt, and so easily offensive that I won't even argue it isn't.

But when the film goes out of its way to point out that the brutalization of the mole people is every inch the doing of the albinos, it's hard not to see a very specific endorsement of Brown in particular, alongside its broader anti-segregationist message.  And when Mole People invokes the oldest racist canard in the whole book, playing it for genre thrills but rendering it harmless immediately, it is impossible (not improbable!) to say that Gorog didn't know exactly what he was writing. 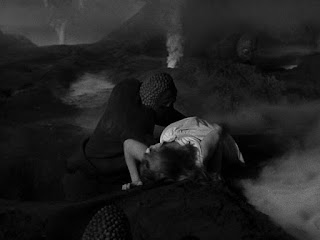 Of course, as a Hungarian Jew, he certainly would have known all too well; I'm tempted to give him the full credit and suggest that the invocation of monstrous forms for his metaphorical minority is another turning of the tables, the appropriation of the sort of vile propaganda that helped drive his people to Auschwitz, and which has helped keep racism alive and well in America to this day.  Meanwhile, Gorog's allegory takes on greater sophistication, condemning traditional faith and entrenched privileged as the reasons these Sumerians have spent five millennia literally benighted.

The two strands of The Mole People weave themselves together in the climax.  In the midst of a cacophony of graceless fisticuffs, a decent if predictable twist expresses itself, underlining the point that melanin really isn't a bad thing to have.  But, the climax is not the end.

In a new finale, written and shot two weeks after the conclusion of principal photography, Bentley and Adal have emerged into the surface world—home to him, "heaven" to her.  Staged by Vogel with a palpable disinterest in the material, yet another earthquake occurs, sealing (perhaps extinguishing) the Sumerian underworld.  Adal scrambles, apparently in a deliberate attempt to find a column to be crushed beneath.  She is successful—and Universal-International's directive to kill her before she could breed fulfilled. 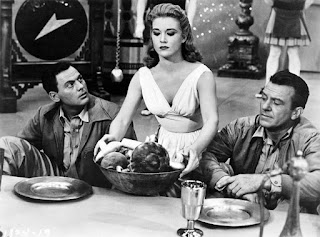 Imagine: upon detection of the barest whiff of miscegenation—miscegenation, I'll remind you, that involved a white man potentially having sex with a white woman, who isn't even really coded as anything else—the studio was willing to spend money to stamp it out.  Alland did very little to stand up for his movie—I pray it wasn't a decision he either authored or agreed with—but the change was, from a certain perspective, a perverse favor.  Baffling to those not in the know, bitter as hell to those who do, it hammers home the fact that the oppression inherent to this fantastical Sumerian underworld has been, and remains, in reference to something very, very real.

Since its release, The Mole People has been mostly enjoyed as a lame B-grade programmer, making its obligatory MST3K appearance in one of their most quotable experiments.  Even so, it's a worthwhile enough waste of an hour on its own—hell, just its crappy plot-driven romance is still better than, say, Jurassic World's.  But more than that, it has substance, too. 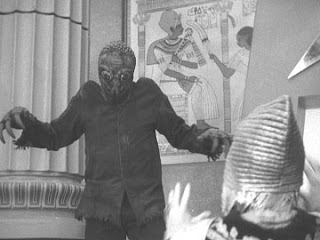 The morality of the past, in the future!:
Sensawunda: