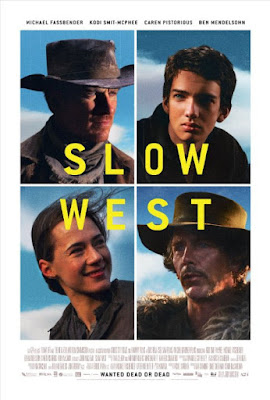 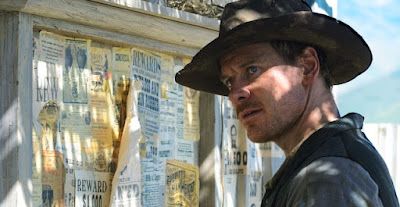 Slow West is yet another unsympathetic Western.  (To the best of my knowledge, they haven't made a sympathetic Western in about fifty years.)  It is devoted, like they all are, to the general idea that the American West was really, really fucking terrible.  And it is maybe even more devoted than usual to the idea than most that the American West was populated solely by bloodthirsty sons of bitches, for the only members of the cast with speaking lines who aren't killers—or don't become killers—manage to escape the charge only because they get shot before they successfully kill anyone, or because they're children.  Now, it's well-attested that the post-apocalyptic subgenre of science fiction more or less picked up where the Western left off, transporting its collection of visual and narrative tropes (sometimes quite crudely) into their lawless, nuked-out futures.  These days, the Western is pretty much only distinguishable from post-apocalyptic science fiction because it still involves revolvers and horses, and because it can't pretend the whole planet has been reduced to quite the same state of nature as its chosen subject, just enough of it that civilization can be largely ignored.

This is where we find Slow West, which is about a callow young Scotsman—oh, how callow he is—traveling across this barbaric country to find the woman he loves, meeting a granite-faced protector who may (or may not) ultimately mean him harm, while a band of degenerate, bounty-hunting badmen pursue the two of them, using them as their guides to the woman and her father, who have not succeeded in leaving behind the crime they committed in the Old World.  It is a pleasant generic set-up, although in the execution it is altogether terribly bleak and more than a little unfulfilling, in that frustrating, very deliberate way in which self-consciously arty filmmakers all too often engage.

But what makes Slow West stand out is that it is also very colorfully bleak.  Starting with at least The Searchers, and going back much further when you count the hundreds of black-and-white Westerns, the West has forever been the Ridiculously Big Desert, a wasteland so gritty you practically feel the sand and the baking sun, and this Fordian vision has held more or less consistently throughout the decades, whether the West has been played by Utah, by Extramadura, or by a Universal-International sound stage.  Instead of this American dreamscape, Slow West offers a varied palette that doesn't so immediately suggest that the hydrogen bombs went off everywhere a few years ago; in fact, blink, and you'll miss its protagonists' detour through the film's only properly sandworn locale.  Robbie Ryan's cinematography is deeply concerned with colors beyond "orange" and "blue," instead pumping the saturation on the verdant greens and sunflower yellows of a living land—even going so far as to capture the wine purples of meadow blossoms.  It gives America back the lush fecundity it lost many decades ago.  Too bad that you'll soon recognize that Slow West's ordinary widescreen was all wrong for the picture, for there are images (particularly ones involving long exterior shots, ones involving long rifles, and ones involving long, loving looks at the pre-industrial nighttime sky) which are absolutely aspyhixiated by the corners of the screen, just begging to be given the lateral breathing room of a 'Scope frame.

Altogether it serves as the foundation for writer-director John Maclean's visual scheme, which is basically, "What if a young Wes Anderson made a Western?"  If the amped-up solid colors of the photography and production design didn't give it away, the shot choices and editing would (just watch Michael Fassbender delicately hang that horseshoe above a door).  Unfortunately, the mastery of camera movement, of composition, and of montage that characterize the mature Wes Anderson is largely absent.  (Even so, there's a playfulness that intermittently strikes through the basically-pleasing monotony of Maclean's homage: a split diopter shot here; a very interesting use of voiceover to tell a story there, with no reason to believe that Maclean had seen Ant-Man in time to rip it off.)  Overall, however, this exists somewhere between Bottle Rocket and Rushmore.  Even the basic warped father-son dynamic, seeing a youth corroded by his exposure to an older, unhappier man, has "Anderson" written all over it.  (Naturally, since it is a modern Western, it trucks with little of Anderson's humorous absurdity; though I must admit it really does have its moments, the best of which involves a tree and a skeletal corpse.  Trust me, it's funny.)

Silas Selleck is that older, unhappier man, and he's the closest we get to any investment in Slow West's cast.  Sadly, given nothing but a taciturn manner and a simplistic moral arc, Michael Fassbender proves that even his worst performances will rise well above the minimally competent, but he's probably never been less compelling to watch.  Kodi Smit-McPhee has even less to work with, and flattens his affect to match his unforgivably shallow character, rendering Jay Cavendish's eye-rolling pursuit of his fantasy love affair as virtually robotic, devoid of any passion beyond his say-so.  It's probably even intentional, one intuits.  Smit-McPhee's hazy performance and his character's faintly annoying manner make it all the easier for Maclean to stand over him in judgment.  The result, however, is a big "so what?"  We spend an hour and a half watching this kid that we don't like, that the film doesn't like, and that his companion has no apparent reason to like, march grimly onward through the West, toward his obvious comeuppance. 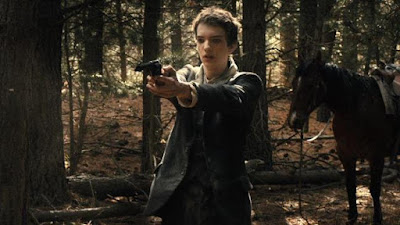 The plot, which itself might've been adapted from a Max Fischer play, is at least admirably simple.  I doubt it ruins anything to say it ends with a gunfight—what kind of lousy Western would it have to be if it didn't?  It's there that Slow West's big points are made, about the foolishness of having dreams, and about the arbitrary ways of death in the West.  It's pretty much exactly the kind of dry lesson this makes it sound like.  The shootout doesn't even seem to intend to be thrilling—though it is, after its fashion, interesting, the very first thing it does is sideline the characters we've followed the whole movie, out of some misplaced fealty to the randomness of bullet-driven violence.  Slow West's revelations duly arrive with this action climax, coming alongside its showy upending of convention.  Each theoretically comes with a punch to the gut.

But these revelations just aren't affecting on any personal level—partly because Maclean does wind up pulling his cruelest punch, but mostly because there was little reason given to care about these characters in the first place.  The conventions don't seem too displaced, either, because the conventions that Slow West attacks were burned to the ground ages ago, by dozens of other movies.  Ultimately, what remains after the dust has settled is Maclean's refusal to provide the kind of visceral satisfaction that even something as caustic and mean-spirited as The Wild Bunch nevertheless recognized was an essential ingredient of a great Western.

Slow West is only a good Western.  In fact, it's almost not that, damnably overconcerned with its air of barely-post-adolescent intellectualism.  (How many scenes involve the plight of Native Americans, despite it having nothing to do with the plot?  How is it that these scenes are nevertheless far more effective than the scenes that actually do advance the plot, or reveal things about our characters?)  Slow West's closing montage—a collection of shots of every corpse either seen or referred to in the picture—might be laughably earnest (and very, very close to totally emotionally unearned, given how little a shit anyone could be expected to give about this pile of dead cyphers).  But it's nonetheless fitting, given the pretensions of the piece, and it can't be accused of being bad.  Thus it winds up crossing the gulf into genuinely, albeit marginally, effective.  In the end, you do wind up feeling something.  It's a distant kind of feeling, though, much more in the head than in the heart, while the guts it misses altogether.