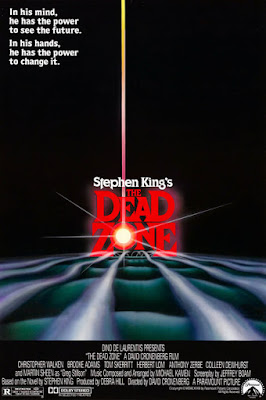 Spoiler alert: moderate (why, I don't even mention the baby, even though it's the coolest part) 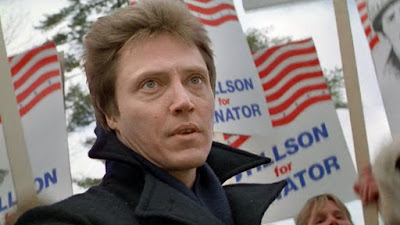 The Dead Zone demands, right away, that I admit that I have never read a single thing that Stephen King has ever written, let alone a Stephen King novel; and I'm sure you'll forgive me for that, because I know you've seen a Stephen King novel.  They're what you fill a briefcase with if you plan on keeping the ransom money for yourself.  The Dead Zone isn't even one of the longer ones, yet I have to assume that the novel must live and breathe in a way that the movie based on it never does, because it would practically have to, the movie being required to cram it all in anyway, but also being too indecisive to ever figure out which of The Dead Zone's stories it feels like telling, instead shotgunning out a collection of disconnected plot points over the course of its short (but not-all-that-short-feeling) 103 minutes.

The premise of The Dead Zone, anyway, involves an elementary school teacher, John Smith (Christopher Walken), who gets himself into a car wreck on the misty dieways of rural Maine rather than spend the night with his horny girlfriend, Sarah (Brooke Adams).  The accident puts John into a coma for five years, and when he wakes up, he notes with quiet dissatisfaction that the world has continued to spin in his absence.  His job is of course long gone, and Sarah has moved on, as well, with a husband and a new baby.  On the plus side—maybe—John has returned to the land of the living with a gift: whenever he touches someone, or an object intimately associated with them, he receives flashes of psychic insight into their future and their past.  He proves as much to his doctor (Herbert Lom) when he describes the man's war-torn childhood in Poland, revealing that his long-lost mother didn't die during the Nazi invasion, but is alive and well in the States.

Then some stuff happens, as John uses his psychic powers for various good acts, like helping Tom Skerritt track down a serial killer, or preventing a young boy's drowning death, and the title is eventually explained in such a way that could not possibly have justified King's employment of such a grandiose phrase as "the dead zone." In the process, John achieves minor celebrity, but rejects it, preferring to work as a private tutor to make ends meet, while always pining for Sarah, who clearly isn't over him, either.  And none of it really amounts to much of anything at all until the very last couple of reels, where John is confronted with the possibility that only he can save the world from a nuclear holocaust triggered by a delusional psychotic (Martin Sheen) who will, nevertheless, somehow manage to become president.  (Which places me in a dilemma, since no non-obvious joke occurs to me, but I clearly have to make a joke; therefore, let's just pretend I said something that was more depressing than funny, and move on.)

The Dead Zone was well-received at the time for reasons that defy any easy understanding, given how on-its-face unsatisfactory it is as a feature film; Roger Ebert laid down a very-impressed 3 1/2 star review, which means that The Dead Zone is, for example, 40% better than John Carpenter's The Thing.  Even so, one suspects it's had a longer-than-average shelf life for a King adaptation mostly because of the man who directed it, and The Dead Zone, I suppose, represents everybody's favorite Canadian body horror specialist, David Cronenberg, "making it" (his next movie was The Fly), though what "it" refers to in this context is rather underwhelming.  Now, there's nothing about The Dead Zone that's actively bad: the shot design finds an eerie mood and sticks with it; more than one psychic flash is accomplished with the kind of dislocating editing and imagery (especially a borderline-whimsical house fire) that plants you bodily into John's own unstuckness-in-time; all along, Walken paints a believable portrait of a man fatigued by the burden of responsibility, albeit, through no particular fault of the movie's own, with a certain latterday baggage attached.  (It is unclear to me at what point Christopher Walken became, you know, Christopher Walken, and for a little while The Dead Zone seems to be playing this up, his very first lines being nothing less than a recitation of Poe's "The Raven."  But there's not another proper Walkenism for the whole rest of the film, which otherwise calls on him to do little more than embody an increasingly-tiresome sadsack who occasionally bugs his eyes out.)

Of course, "not being bad" isn't at all the same thing as "good enough": anything The Dead Zone does that is actively good (Michael Kamen's nice Hermannesque score excepted) only ever exists for a few minutes at a time before moving perfunctorily along to something else.  Meanwhile, if you didn't already know it's a Cronenberg film from the first phase of his career, not a single moment would give it away, other than the fact it was shot in Canada and emphasizes Ontarian landmarks like the Screaming Tunnel, and, perhaps, a baroquely-conceived suicide sequence that, even so, promises so much more gruesome coolness than it ultimately delivers.  (It must be one of the most underexploited R ratings of its decade: if not for some sex murder frontal nudity—wholly unnecessary and likely inserted at the behest of producer Dino De Laurentiis—it would be positively demure.)  Effectively, The Dead Zone manages nothing that any other competent director of the early 1980s could have done in Cronenberg's place, and it's arguable it manages even less: it offers a glimpse of a disturbing future in a way it couldn't have intended to, its airlessness and general lethargy prefiguring what Cronenberg's movies were going to increasingly feel like as time went on and he found nothing to replace the grotesque inspirations of his salad days.  Not that the smeary non-structure provided by screenwriter Jeffrey Boam could have excited his interest in the first place (Boam describes it as a "triptych," which is true in only the most technical of senses), yet apparently Cronenberg rejected King's own screenplay in favor of it.

And that screenplay really is an insuperable problem: The Dead Zone never finds a single scenario it likes, despite arriving at no fewer than three that would support a whole movie of its own if anybody had had a mind to make one, hopping from vaguely-interesting premise to vaguely-interesting premise, only to finally land on a morally-fraught paranoid thriller which starts up at around the 85 minute mark and which it resolves—with nothing left but the doing—in the space of a single flatly-delivered conversation that goes, more-or-less verbatim, "Well, sure I'd kill Hitler."  The Dead Zone feels like somebody they didn't pay very well was tasked to repackage three episodes of a CBS supernatural drama you've never heard of as a movie, but even that might be giving it too much credit: The Dead Zone, starring Anthony Michael Hall, aired on USA.