King Week: Who made who? 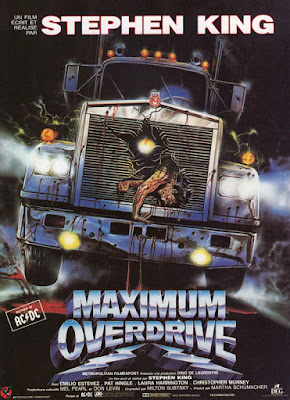 1986
Written and directed by Stephen King (based on the short story "Trucks" by, you guessed it, Stephen King)

I think I regret seeing Maximum Overdrive, and not solely because it's bad—though it is quite famously bad, and I'm not here to quarrel with that reputation—but because it had become for me something beyond good or bad, a kind of trash cinema holy grail that was always going to be more satisfying to picture in my head than it could be to actually watch.  It was born out of the most bodaciously stupid high concept, you see, one previously explored in prose in Stephen King's collection of short stories, Night Shift; and Overdrive is a chronicle of the week that Earth spent orbiting through the tail of a passing comet, evidently the home of a malign alien intelligence that sought our world as a colonial possession.  This is needlessly and kind of idiotically overexplained in the movie, at the beginning and the end—exceptionally needlessly, because the point doesn't require any explanation, and the point is the same as the name of the short story it was based on, that point being trucks (along with other machinery, but mainly trucks), come alive and evil, basically if a sequel to Duel was also a remake of Night of the Living Dead with a touch of Phase IV added for flavor.  The fact that this isn't one of my favorite movies of all time (I stopped developing emotionally around the age of five) is honestly a little distressing; that it isn't even really acceptable could only be a truly crushing disappointment.  At least I'll always have The Transformers: The Movie, another, much better rock-and-roll movie about living trucks that, through what I presume is a total coincidence, came out literally two weeks later.  I'd say it was the zeitgeist, except both movies bombed pretty hard.

It takes a little while for Overdrive to fully betray the infinite promise of its concept, however.  Indeed, it opens with what might be its single strongest gesture, teasing its premise in a delightfully funny yet unaccountably unsettling way, and somehow it hasn't even gotten to the trucks yet: we begin in some big American city, where we sit and watch an electronic sign outside a bank while the sign blandly displays the date and the time, then the temperature, and then, bold as anything but without a single person noticing what's happening, "FUCK YOU."  I truly do love this opening, even if the text block  explanation beforehand degrades it, and even if the movie almost instantly repeats the same joke in a more buffoonish register, with an ATM declaring that our cameoing director is an asshole.  On the plus side, this does at least mean our cameoing director admits it, and the first step to recovery is admitting you have a problem.

Overdrive both began and ended King's career as a filmmaker qua filmmaker, and rightfully so, considering that it's a lousy film and, in what King has in later years conceded was indeed his own cocaine-fueled carelessness, he managed to inflict a debilitating injury on his DP, Armando Nannuzzi, with an errant lawnmower.  Yet the half-blinding of his cinematographer aside, Overdrive's failures lie less at the feet of its drug-addled director than they do his drug-addled screenwriter, though since this was also King, it's not a very complex game of "whose fault was this?" we get to play here.

The story develops across multiple strands as the crisis develops, shepherding a number of individuals to the main (and eventually only) hub of the film's action, an exurban truck stop outside Wilmington, NC, marking this as one of the comparatively few King stories that isn't fixed on Maine, but mostly, it seems, because it wants to populate itself with a small army of Southern rubes.  The most important of these is Bill (Emilio Estevez), who's already at the truck stop, one of several parolees who've been effectively enserfed by his despicable good ol' boy boss, Bubba (Pat Hingle).  So far, so good—it even has some literary parallelism of theme going on—and Overdrive remains a great deal of fun so long as it's setting its pieces up (it is perhaps the only movie ever made to achieve a righteous kill with a vending machine), even when its pieces are deeply substandard, like a hick-accented Lisa Simpson (well, Yeardley Smith) shrieking in her husband's ear while a demonic tow truck attacks them.

The problem is that once it sets those pieces up, it has no idea what to do with them except to run out the clock.  Once its dozen or so cast members are all trapped at the truck stop, the movie congeals like molasses: the evil trucks do nothing but circle around, and the humans do even less, the antagonism between Bill and Bubba developing with the kind of anti-intensity that never quite acknowledges the end-of-civilization events that are transpiring around them, and involves characters kind of vanishing from the film if they're not necessary for a specific scene.  One supposes the idea was to contrast the inhuman enemy outside with the nominally-comedic messiness of the humans inside, exemplified by a conversation undertaken while one participant is engaged in a long, loud shit and simultaneously reading a porno mag, things that evil trucks, at least as far as we know, do not do. Maybe needless to say, Overdrive's efforts in this direction are almost uniformly obnoxious and terrifically poorly-acted; when Emilio Estevez towers above the rest of the cast, your film is clearly in trouble.  (Not that the actors themselves are the only problem with the performances: the big histrionic enunciation of Overdrive's central theme of out-of-control technology—"WE MAAADE YOU!"—would probably be somewhat more effective if King didn't have it happen twice.)

So nearly the only thing that happens in the whole middle hour besides shtick is a conveniently-gonzo revelation (Bubba has a military-grade arsenal under his truck stop), though King never notices that anti-tank weapons would seem to put any tractor trailer, however evil, at a significant disadvantage; all this really winds up doing is ensuring that a few trucks get blown up without any particular plot importance attached to it.  Basically, then, it just stews and stews and stews in its crappy siege story, to no profitable end, waiting for King the Screenwriter to get to the other half of his scenario, whereupon the trucks finally make their demands known and enslave the humans for their gas-dispensing hands.  That large cast, in the meantime, never justifies its presence: Overdrive has an astonishingly low body count for a film so badly overstuffed with expendable meat, and it can't even rise to the level of a dumbass slasher that uses trucks instead of pointy things.  The most iconic thing about Overdrive, the Green Goblin rig, isn't iconic for any reason I can identify: for starters, I sort of had it in my head that the whole machine was green-and-purple, like the supervillain it's based on, but it's just a novelty face on the nose of a (black) tractor; it also does almost literally nothing.  It's remarkable that a movie about living trucks offers just one car chase, which, you know, was the only possible rationale that King's screenplay could have had for the extreme mushiness of his rules about which machines get the possession treatment and which don't.

But for all that it's a waste of its scenario, there's something about Overdrive that's hard not to desperately want to like: King's repeated imagery of driverless trucks corralling the gas station never stops feeling full of murderous potential, especially because the matter-of-fact summertime cinematography and the sheer brute existence of those trucks make that image feel so tangibly present; nor does it hurt that I'm intimately familiar with and a little nostalgic for the landscape of the film's setting.  The basic beats of the story are functional and tantalizing, too: evil trucks want to kill everybody; but wait! actually, evil trucks want to build their own society, and death would be preferable to the rule of these machines who've turned the tables on their creators.  (It's been said before, but Pixar's Cars is a Maximum Overdrive sequel.)  And, all along, there's the not-so-secret weapon of the AC/DC score and soundtrack, screeching away and lending a winking, self-conscious radness to the film, which may not be always (or, really, ever) flawlessly-integrated into the proceedings by King, but obviously could not be a more perfect and inspired choice for this particular film.  (You can confirm this perfection by considering other possibilities, even very similar acts like, say, Guns N' Roses, who do not have quite the same sneering demeanor or shitheeled insincerity, even though they share the same high pitch, same genre, and same general musical virtuosity.) What a damned shame that it can't live up to that music for more than thirty seconds at a time, and not that frequently even then.