Man, everybody really does want to be a cat 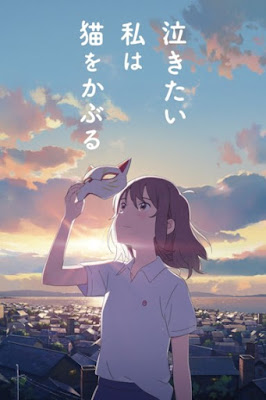 Here's something: I felt a twinge of dweebish pride while watching the closing credits of "Netflix's" A Whisker Away.  When the Studio Colorido logo appeared (I'm sure it appeared earlier, but I must've missed it), I said aloud, "Yes, I was right!", having clocked the anime production house's aesthetic from the use of some dappled lighting effects as seen through foliage, along with the overly shiny consistency of its not-always-elegant 3-D backgrounds.  Colorido, you'll recall, was the company responsible for last year's upsettingly awful mommy-issues fantasy Penguin Highway, an E.T. kind of thing as processed through the premise of Solaris, and ultimately much less about "mysterious penguins" or even "alien contact" than it was "an inappropriate relationship between a pubescent prodigy and his dental hygienist."

A Whisker Away, sold to Netflix for distribution everywhere, after the pandemic cut short its Japanese theatrical run earlier this year, looks very much like its predecessor, with its major distinctions being only its slicker character designs and perhaps some slightly more-accomplished (but still borderline-televisual) character animation; and, because it is also not as sexually worrisome, it is an improvement in every possible respect.  Don't get me wrong: it's still perverse in its way, but at least it's perverse in newer, more interesting ways, and it has the decency to never induce any involuntary squirming with its story, even if its moral seems to be "super-creepy stalking works."  I guess this went unnoticed because, after all, girls can't stalk boys, silly; on the other hand, stories have to have, well, story, and "people like each other already, so they spend time with each other providing the emotional support they need" is a pretty fucking boring story, so let's just enjoy the weird id stuff while we can still get it.

So: A Whisker Away's screenplay, courtesy Mari Okada (an improvement in every possible respect over her last project that I saw, her directorial debut, Maquia: When The Promised Flower Blooms), tells the story of junior high schooler Miyo Sasaki (Mirai Shida), known to her classmates as "Muge," an acroynym for "Miss Ultra Gaga and Enigmatic," which I assume plays much better in Japanese.  Miyo is sad, in part because of her difficulty in adjusting to her parents' break-up and a new stepmom, Kaoru (Ayako Kawasumi), and also because she has no friends other than her slightly-less-of-a-loser best bud, Yoriko (Minako Kotobuki).  But most of all, Miyo is sad because she has an unrequited crush on her classmate Kenoto Hinode (Natsuki Hanae), a quiet, studious child dealing with his own familial problems, particularly his dad's death, as well his mom looking askance at his apparent dream to take up his grandfather's business as a potter, just in case you thought The Garden of Words' "my dream is to be a shoemaker" or Colorful's "let me tell you about my cool hobby, historical trolley lines, for twenty minutes" were simply too relatable.  (One presumes he'll hit the Reality Wall in a few years, and it's barely an element in the film, so let's just let him have it.)

In any event, Miyo has spent what we can guess has been many, many months more-or-less full-on sexually harassing Kenoto, with no good results—it's one of the reasons she's so terrifically unpopular, though the other reason seems to be that in Japan they bully you if your parents divorce, which is both horrifying and potentially true—but, recently, she's found a way to get closer to the boy she loves than he'd ever knowingly permit.  Through the power of a magic mask, she's been coming to his window every night—no doubt getting rubbed all over—in the guise of a snow-white cat which he has named "Taro."

That's the first indication of A Whisker Away's biggest problem, incidentally—not its hilariously inappropriate premise, I mean, but its narrative choppiness, intensified by the somewhat addled way it goes about prosecuting its fantasy elements.  We get a very rapid and rather disorienting prologue (if a somewhat formally interesting one, with all the smudgy neon felid forms populating it), that comes off more like a dream than a flashback; and that's about it as far as "a first act" goes, Whiskers Away deciding it's more fun to spring Miyo's transmogrification on the audience as a twist than to set it up, or explore the potentially-pretty-fun prospects of a kid learning to be a cat.  (I'll give it this: the super-vague trailer absolutely permits this twist to land; I had an inkling that the movie was about tweens becoming cats—I mean, it's in the Japanese title—but I didn't know why Miyo had become a cat, and therefore assumed it came way later in the film.)  Instead, we're obliged to play catch-up, and this is a choice, though by the time we slip and slide our way into an extremely Miyazaki-influenced fantasy world, it starts to become maybe even a little actively confusing, with a whole lot of mythology to inarticulately (and, I suspect, inconsistently) cram down our throats, from the demon Miyo made a deal with in the first place, the Mask Maker, who returns to tempt her with the prospect of staying a cat forever, to the cat who's in line to take Miyo's place in her human life.

It gets a bit more complicated than is really productive, and the genuinely fascinating parts of the film do start to get pretty heavily watered down with its fantasy adventure plot in an extradimensional realm that only cats have access to.  It's a little too much, is all, but it doesn't completely drown its more important throughline.  It's transparently clear that Okada's goal was to do something that resonated with teen depression and suicide, but metaphorically and in as fun a way as possible, which I suppose is why a mostly-trifling fantasy like Whiskers Away bears that Japanese title, Wanting To Cry, I Pretend to Be a Cat.  Maybe it sounds less art-film sad in its native tongue.  I won't say Okada doesn't succeed, though; and directors Junichi Sato and Tomotaka Shibayama have clearly noticed A Silent Voice's success, and aren't afraid to rip off some of its better tricks to subjectively demonstrate how disconnected and alone Miyo feels, when, in moments of stress, her parents and peers become inhuman scarecrow-like stickpeople.  Meanwhile, Miyo's discomfort in her real skin and the flailing desperation of her personality are strongly communicated in her animation and in Shida's voice alike.  Now, it's unclear why Miyo needed to be as full-tilt insane as she is presented here (her personality defects are played as much for laughs as pathos, e.g., she greets poor Kenoto every morning with a move resembling Princess Peach's Peach Bomber from Smash Bros., that is, an ass attack); and thus if anything is a problem in this movie (and plenty of things are problems in this movie), it's that this tends to erode our sympathy for the lonely little girl who just wants the boy she likes to like her back.  It's hard not to have some sympathy nevertheless, even if her protagonist's duties, and the narrative focal point of her film, do perceptibly shift to Kenoto as the story unfolds, and not totally to the film's benefit; or even if, frankly, the cat who wants Miyo's face is vastly more compelling in her motivations than Miyo is.

On the plus side, if it's messy, it's never boring, and, for all its tonal whiplash, it's often very funny (sometimes even intentionally!).  There's blatantly a more austere and focused version of this story (if maybe not to the extent of grinding naturalism, which is where A Silent Voice tripped up) that really does tear your heart out for Miyo.  But this one at least functions, even if it's only ever in an inordinately and even irresponsibly light way.  It's okay, is what I'm saying, and with a few more like this, I won't think of Studio Colorido as "the one that did that movie about the pedophile who liked penguins."