I suppose I could be persuaded to believe 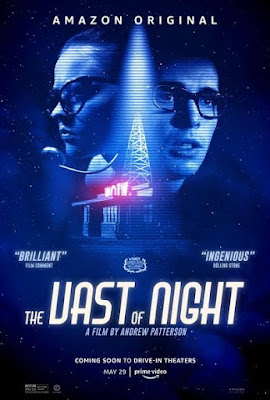 THE VAST OF NIGHT

What does it mean to call a directorial effort "confident"?  People use that phrase all the time to describe something they've enjoyed.  I mean, I'm sure I've called dozens of films "confident," too, because I'm only slightly less lazy than everybody else, and I've likewise done it mostly in the context of new filmmakers doing good, impressive work.  But "confident" doesn't mean good, and nobody who's ever ventured out into the world believes that "confidence" is actually synonymous with "skill."  It's only a word that describes someone who's absolutely certain of their own judgment, and, obviously, not everybody should be.  With that in mind, let me tell you that Andrew Patterson's The Vast of Night is very confident.

So as not to spring it on you later, The Vast of Night (not technically a debut, but no doubt the first film by Patterson that more than a few thousand people have seen) is in fact fairly good work, and  I was at least moderately impressed.  It's by no means all, or even mostly, misjudgment and misstep from its director.  But then, that's as much because it has a simple, polished screenplay, courtesy the director and his co-screenwriter, Craig W. Sanger, which they conceived with a low-but-not-too-low-budget in mind.  Devoid of any noticeable ambitions, at least on the page (other than "be a period piece," which is just ambitious enough to get attention), they seem to have had nothing much more on their minds other than to tell a spooky story about aliens.  No, that's not really a spoiler: The Vast of Night, though set in the 1950s, is 100% a movie of 2020—technically 2019, thanks to some early festival screenings, but I'd prefer to get up to at least the low double-digits in my new release reviews for 2020, you know?—and, being a movie of 2020, it wisely relies on you being several light years ahead of its characters.  To this end, it derives much of its suspense and atmosphere from our understanding of its signifiers, while hoping that by taking this boilerplate American myth back to the period of its birth, it can make it seem new again.

And full points for that!  Hell, it's probably the best Roswell-style alien movie in years.  It's also extremely, dysfunctionally confident: it's the kind of movie that begins with an immensely long tracking shot (or, rather, a collection of long tracking shots, interspersed with a few semi-conventional shots) that tends to follow our characters from behind whilst they walk and talk, and certainly our director's hand is on full display, insofar as these shots demonstrate that Patterson was able to get his hands on several dozen 1950s cars, a lot of 1950s costumes, a hundred or so extras, and a high school gym.  The goal of this long introduction is to situate us in Cayuga, NM, in the mid-1950s, and I won't deny it works for this purpose; I'll even give Patterson this, it also has a gently-voyeuristic quality that not only allows us to unobtrusively get a sense of the rhythms of this small town, but also the rhythms of our two leads, while still simultaneously suggesting some vaguely-defined dark fate stalking them in the night.  But then, by the exact same token, it's also the kind of movie where we don't get a good look at the face of either of our two leads for slightly over twenty full minutes, and for much of that time we probably don't understand half of what they're saying because we're still getting used to the salience of the accent work and we can't see their mouths.

Other gestures are subtler, and far better: almost as if to make up for the tracking shots, the next big scene has Patterson spend five minutes on naught but a slowly-tightening medium-close-up, which forces us to watch something no more (but no less) visually interesting than the burgeoning worries of a switchboard operator, effected with a surprisingly deft touch about which conservations we need to hear both sides of—I didn't even notice at the time how much Patterson cheats with this.  To his credit, he has a gratifying habit of letting several other such conversation scenes play out with much the same slow-boiling tension.  But then there's the centerpiece sequence, and we're right back to "what the hell was that for?", as a drone camera or something tracks over the length and breadth of the whole town, from the phone company to the radio station that is the film's other major location, across streets and alleys and straight through the middle of a high school basketball game (and then up the bleachers and out a fucking window!), when, like, a pan up to the black sky above would've done just as well as a segue.  It is showing off in the worst, most distracting way—so mark yet another new director with a film that's in large part just a visual resume for his next job at Disney.

And this isn't even talking about the film's very first gambit, a framing device that places us inside some modernist, vaguely inhuman-looking home, and slowly pushes in on a black-and-white television program called Paradox Theatre, which is every bit the playful Twilight Zone (or Outer Limits) homage you think it is—Serlingesque narration and everything—and which invites us to view The Vast of Night (or, perhaps, "The Vast of Night") as an episode of this show, something reinforced by the extremely questionable decision to take us back out of the ('Scope ratio, color, digitally-photographed) movie and back to the scanlined CRT image which we already entered back at the beginning.  I don't know why it invites us to do any of this.  It is, obviously, not in any sense invested in the actual aesthetics of The Twilight Zone, though I'll even spot The Vast of Night this: no movie with the slightest commercial aspirations was ever going to try to look like a 1959-1964 television sci-fi anthology, or even the theatrical science fiction that paved its way.  It would be nice if a movie did that, and if the formal throwbacks we do get weren't always trying to do either silent cinema or 80s exploitation films, though of course I would never expect one to.  But The Vast of Night is only "like" The Twilight Zone if you've never seen The Twilight Zone: it is not a weird, vaguely surreal morality play, nor a one-act shocker with a twist; it's almost every inch exactly what you'd expect from the one-clause summary I provided above, and an opening that homaged The X-Files would've been rather more honest.  (As for a "playful" homage, I don't think that adjective would come up again, either.)  And so, especially since the framing device intrudes upon the main action several times, you are bound to ask: what is this movie doing?

I don't know if Patterson could tell you, but I bet he was convinced it was a great idea at the time, and it's a pity that he's so drunk on these big showboating gestures, because once he settles down and just tells his damn story properly, he's aces at it.  So: that story concerns 16 year old switchboard operator, Fay Crocker (Sierra McCormick), and the radio DJ I believe we're supposed to guess she has a crush on, Everett (Jake Horowitz), and the momentous night they discovered something not of this Earth.  It was just their luck: being practically the only two people in their whole town who haven't flocked to the high school gym to the see the first basketball game of the season, that means they're also the only ones to notice the telephonic hiccups and strange radio signals that begin to interfere with their respective electronics.  Everett, at first nothing more than bored, takes Fay's recording of the sound to the air, asking all five of his listeners if they can identify it; to his surprise, one of them (Bruce Davis) can.  But they're probably not going to like the story he has to tell.

A lot of The Vast of Night is people telling stories, in fact, sometimes with the only visual component being the listener, or just plain darkness, and in these long moments, devoted to the screenplay's involved, conspiratorial tales, Patterson's confidence actually pays off.  Indeed, I half-expect the overreaching stylistics are there just so no one can accuse his movie of being talky and boring (they still could if they wanted, but I wouldn't).  He gets a lot of mileage out of his two leads, who often have to carry whole scenes with just their faces, and they get sharper personalities than the scenario even quite requires, Fay just hoping she'll be able to get out of this smalltown languish one day, and Everett doing the same, only having reached the stage that he probably knows he's kidding himself, and lashing out with a fast-talking abrasiveness that finds a comfortable spot on the border between funny and mean.  Patterson gets more mileage still out of M.I. Litten-Minz's smartly-underlit cinematography, and I won't say he gets no mileage out of Erick Alexander and Jared Bulmer's ethereal score, which clearly wants to break out into their best Clint Mansell impression, but also never has any place to really sing before the finale.  Still, it's a movie that lives or dies on its mood, and despite all the distractions that get thrown in during the first half hour, it absolutely has mood.

And, like I said, going back to the origins of UFO mythology—to the days when not every person could describe the difference between a Gray and Reptilian, when communication was hard, and small towns were universes unto themselves—this recaptures a mood that was driven into ground 30 years ago by The X-Files and things like it, and it allows those tall tales a chance to exist in their original context, for the benefit of characters who are permitted to quietly lose their shit as they start to believe in them.  (Meanwhile, it even adds to them in clever ways: there's a racial element that The Vast of Night throws into its government conspiracy that ought to come off as 2020 flexing its way into the proceedings, but feels surprisingly authentic to its 50s setting, and is modestly moving in its sad, matter-of-fact way.)  In the end, even with all the unnecessary "I'm making a movie, ma!" flourish, Patterson at least does seem to understand that his mission here is to tell a spooky story about aliens; and so, even if his movie's occasionally outright irritating in the ways it wastes someone else's money on its director's demo reel, I can't say he didn't succeed.  I bet he's just insufferably confident now.