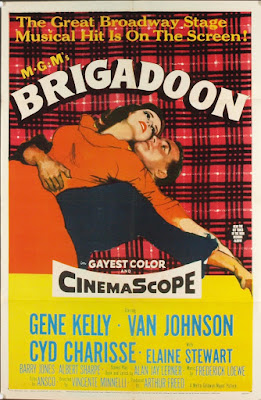 From 1952-1953, Gene Kelly was on his European sojourn.  Tasked with making films with assets belonging to MGM, but frozen as a result of post-war currency restrictions, Kelly was given almost unprecedented freedom to spend as he saw fit, which in retrospect was probably a mistake.  Kelly produced three films for MGM in Europe, but the big one was Invitation to the Dance, Kelly's great passion project.  Intended as the ultimate musical, it was the all-dancing art film Kelly hoped would erase the distinction between highbrow and low.  In some ways it even lived up to his ambitions, though MGM had no idea what to do with it: Invitation to the Dance was only released (in truncated form, and in truncated markets) in 1956, and not to any groundswell when it was.  Being such a titanic figure in the genre, Kelly's absence from Hollywood (and the fact he brought not one commercially viable thing back with him) is sometimes cited as one of the factors in the decline of the film musical in the mid-1950s.  But then, it was one of many; we're looking at another right now.

You see, upon his return in 1953, Kelly was treated to a homecoming of sorts.  Or maybe a punishment.  Either way, this was Brigadoon, and it seems like it should've worked out better.  It was a new collaboration between Kelly, producer Arthur Freed, and director Vincente Minnelli—the same trio behind An American In Paris in 1951—plus American's librettist/screenwriter Alan Jay Lerner, if that name conjures up any warm feelings for you.  To sweeten the deal, Cyd Charisse, Kelly's partner for the "Broadway Melody" sequence of Singin' In the Rain, would be in it too, having now attained something of a stardom of her own.  Of course, it didn't remotely work out, and Brigadoon's become a punchline between 1954 and now, not least because while it boasts of an unforgettable hook in its scenario, it was bad, and was recognized as bad at the time, and represented another big loss for MGM.

It's by no means the worst version of itself—one can easily imagine a thoroughly terrible Brigadoon, and this is only the Brigadoon with some terrible parts.  As far as all their individual jobs go, Kelly and Charisse are quite good (it is certainly their fullest collaboration, if also the one that most completely falls apart around them); and Minnelli directs it well enough, albeit with a tendency toward blithe conventionality; and Freed at least marshals the correct resources for the project, if not the resources Kelly and Minelli wanted, and he manages this in spite of the budget cuts demanded in the face of their genre's declining popularity.  Unfortunately, for their efforts, Brigadoon runs hard up against a wall called, well, Brigadoon.  While it had been a very successful Broadway play, I suspect Brigadoon also sucks its in original format; then again, the various changes and compressions that Lerner makes for the film version of his stage musical's book are pretty much uniformly bad ones.  I mean, let's just get it out there: an MGM Gene Kelly musical should never have a plot point that could be described with 100% legal accuracy as "depraved heart murder," but Brigadoon does.  Though if an MGM Gene Kelly musical did put that in its plot, it should at least affect its plot.

So that plot, then: a pair of mid-century American salarymen, Tommy (Kelly) and Jeff (Van Johnson), have taken a very mid-century American salaryman holiday for themselves out to the Scottish highlands in order to kill animals and, in Jeff's case particularly, drink.  They get lost, and use the opportunity to have an expository conversation wherein we learn that while Tommy is engaged to be engaged, he's having serious doubts about his gray little life, and doesn't think marriage to a boring rich girl is going to help him resolve these existential woes.  After Tommy thus unburdens his soul to his indifferent friend, they try to figure out which way to go, but out of the mists is revealed a town not marked upon their map, and they head down to get some breakfast, much to the shock and dismay of its inhabitants.  This, they learn, is Brigadoon, a village rustic even by the standards of rural Scotland.  We know a little more than they do, having awoken with the town back at the beginning of the film; we know that this is the day of Charlie's (Jimmy Thompson's) wedding to Jean (Virginia Bolser), which has put most of the town in a celebratory mood, affording them a willingness to be hospitable, even if their guests seem to terrify them.  The one person not celebrating is Harry (Hugh Laing), the man Jean rejected in choosing Charlie, and who seems even angrier than this would justify as he complains of being trapped in Brigadoon for the rest of his life.  Meanwhile, the one person not discomfited by Tommy and Jeff's arrival—who, indeed, seems quite intrigued with Tommy—is Jean's sister Fiona (Charisse).  And, now that I remember her, there's also Meg (Jodie Heath), a sexually aggressive milkmaid who drives Jeff to distraction in their own, nominally-comic subplot.

Which brings us to Brigadoon's problems, in that it's, like, half subplot.  It has two; neither have any significant connection to the main romantic plot or each other; both appear to be vestigial remnants from the play; and both are, to varying degrees, awful.  Meg and Jeff's, in fairness, is mostly just a waste of time, nothing to get too upset about.  The other requires a bit of explanation as to what Brigadoon is, and, while it's possibly a spoiler—it is, in any event, kept secret for half the movie—it's also the thing everybody already knows, which is that Tommy and Jeff have stumbled into a soft place in time, a village stuck in 1751, reappearing in our world only once every 100 years.

Your mileage may vary for Brigadoon's first half, depending upon your tolerance for its cartoon Caledonia (the cast's accent work and Irene Sharaff's costume design are fine for their limited purposes), but I wondered if the film deserved a better reputation: up until the big reveal, it treats its premise with a healthy dose of rigor and mystery (I like that the townsfolk immediately recognize that Tommy's money is worthless to them).  To his credit, Tommy isn't even that slow on the uptake, starting to suspect what's awry within just a few hours.  This does not last, for Brigadoon gets sloppy quick.  For one thing, it forces you to notice that by setting "the miracle" in as recent a year as 1751, that means they're on just their second day unstuck in time, even if they act like its their thousandth.  Eventually, our miracle winds up tediously overexplained by the village schoolmaster (Barry Jones), who recites a stupid, overly-complex, and even unnecessarily-problematic origin story involving the local reverend's fear of rampaging "witches" (again, in 1751), and the deal he made with God to hide Brigadoon in a Time Trapper-esque pocket dimension.  (Frankly, it kinda sounds like he accidentally made his own deal with the Devil.)  Needless to say, Brigadoon doesn't require any origin story, and this one doesn't even answer the real questions, remaining rather hazy about how this knowledge was disseminated (the reverend was hoovered up like Elijah), and Brigadoon's inhabitants surely haven't had enough subjective time to process this and accept it as part of their identity, rather than it being something almost as new and disorienting to them as it would be to outsiders.

Brigadoon's miracle, furthermore, is subjected to rules that serve only to drive up the stakes in mindlessly miscalibrated ways.  That's where Harry's subplot comes in and the film just blows itself up in a fit of bad judgment, Harry being determined to get out, but should even one inhabitant of Brigadoon depart its boundaries, the whole town shall vanish forever.  This may explain why nobody gets sore that Jeff shoots him in the back while randomly firing his shotgun at nocturnal birds.  But the really debilitating thing is that Harry's bullshit is so horrendously orthogonal to the actual story, having precisely zero impact on the nascent romantic tragedy of Tommy and Fiona, which is surely the only thing we care about.  (Imagine, for example, Before Sunrise being saddled with dumb subplots like this!)

And, thank goodness, theirs is the one part of Brigadoon that functions: it starts off wobbly with Charisse's lame yearning number, "Waiting For My Dearie," and the romance is so featurelessly elemental it's hard to get much of a handle on it; but the basic theme of reconnection with a simpler life gives it enough power to get by, and Kelly and Charisse are far better than this crappy, rushed, and detail-free relationship deserves.  (Part of its crappiness is structural: the epilogue, which concerns Tommy's career and fiancée back in America, does tremendous work in explaining what was so soul-curdlingly repulsive about his life before Fiona—the snippets of vapid upper-middle-class NYC captured at a claustrophobic bar make for Minnelli's best direction of the whole film—though it's a necessary criticism that this arrives roughly 100 minutes too late to be especially useful.)  Still, Kelly and Charisse overcome their weak characters in their sweet, sensitive ballet in the countryside, "Heather on the Hill," which showcases the two great things that Brigadoon has going for it: first, the headliners' dancing (duh); and, maybe even more importantly, Cedric Gibbons and company's production design.  It's eye-rolling to read that Kelly and Minnelli wanted to burn even more of MGM's money by shooting on location in the Highlands, and backlot shooting was a fallback they undertook with the greatest reluctance, because the single most salient good quality of Brigadoon is the constancy of its enormous, just-this-side-of-impressionistic painted backdrops of rolling green hills, blooming purple fields, and majestic soaring mountains under a steely-gray sky (supplemented by miniatures in the midground, which may be the most crucial aspect of it).  Altogether, these sets (well, the countryside sets—the human-built structures are entirely unremarkable) impose upon the film one of the most superlative storybook aesthetics I've ever seen in live-action, and Brigadoon, after all, is a fairy tale, albeit one flabbed up with much extraneous padding.

The songs are, as a rule, merely okay; only one, "Almost Like Being In Love"—sung for Kelly's solo number wherein Tommy explodes with happiness over finding Fiona—is truly memorable.  It's in the vicinity of a bona fide classic; and, true, even one bona fide classic is something of an accomplishment in a musical.  (It even benefits from Kelly's ragged, just-a-guy vocals, and the swooping and reeling camera makes it the most visually exciting part of the film.)  The remaining numbers are adequate, but nothing special, with a couple pitting tap and ballet versus Celtic "and why would I move my torso?" linedancing.  The film also eventually has to contend with nighttime, meaning we cannot see the backdrops; hence it becomes significantly less interesting to look at as it goes along.

I said it's not the genuinely terrible version of itself, but it is annoyingly easy to see how it could be better: the central story—does Tommy leave, or does he abandon everything for true love? does Fiona want him to do that?—is almost overloaded with potential drama.  That it taps into only the shallowest pools of emotion throughout its largely-wasted 108 minutes speaks volumes against it, even before it breaks its own rules for a cheap ending that left me even more sourpussed than I already was.  Maybe the stage Brigadoon provides this story some sense of integrity; but the screen Brigadoon lacks that quality above all.