Hang on a minute lads—I've got a great idea 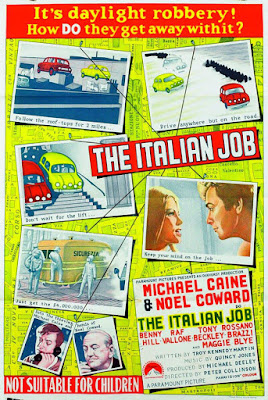 The Italian Job is maybe not what you think it is, or at least (it's a pretty damn famous movie, actually) it's not what I thought it was, and somehow I managed to come to it almost entirely cold, aware only that it involved Michael Caine, a caper of some sort, and a car chase involving Mini Coopers, and absolutely nothing else.  Turns out it's dumb and weird in ways that make it hard to determine if its dumbness or its weirdness is its predominating factor, but since I did like it, I guess I'll go with "weirdness."  It is, of course, a heist movie, and one of the classics from what I guess one might call the golden age of the genre; but it operates in hardly any way like one, which I imagine is what caught me so off-guard about it.

Even so, if I relate the plot, it seems like a normal one: we begin in Italy, where a certain criminal mastermind named Beckermann (Rossano Brazzi) is driving fast down an Alpine highway in his Lamborghini, to no apparent purpose but the sensation of speed and the attractive Italian landscape photography and the pleasantly brassy accompaniment of Quincy Jones' score and the necessity for a 1969 film to have a protracted opening credits sequence; and so we don't even quite get the impression that he's running from something until the moment he enters a mountain tunnel and meets his doom in the form of a giant piece of Caterpillar earth-moving machinery that barely notices the high-speed collision, and which then gingerly tosses his Lambo over the side of a cliff while mafiosi look on.  Meanwhile, in Britain, gentleman thief Charlie Croker (Caine) has just been released from prison.  He already has some vague ideas on how to get back to work, but these become much more concrete when he's gifted by Beckermann's widow with a plan to rob the Fiat Motor Company in Turin of a shipment of $4 million worth of gold, representing a down payment by a Chinese firm to build a new car factory of their own.

To this end, Charlie builds a team to grab the gold: Professor Peach (Benny Hill), to program a new tape for the Turin traffic control center, thereby causing a massive traffic jam; Brinkinshaw (Fred Emney) to walk around Turin disabling their surveillance cameras; and a whole lot of drivers and various other operatives, who will speed away in three Mini Coopers with their respective third of the loot, after they've hijacked and successfully breached the armored car carrying it.  A good plan, but one that needs significant institutional backing, which is where Bridger (Noel Coward, yes, that one) comes in, a man we met back at the beginning—a fellow inmate of Charlie's, though I hope one can be forgiven for thinking the dignified old dude in the suit was the warden—a Moriartyesque fellow who is apparently the undisputed King of the English Underworld, and is skeptical of the whole affair, but is swayed by Charlie's invocation of the national interest when he explains that the gold would buoy the Italian economy at the expense of the United Kingdom's.  And so away they go to Italy, eventually, where they brave the Italian Mafia, who have their own parochial view of who gets to commit what crime in their country.  Not discouraged, they dedicate themselves explicitly to Britannic supremacy over continental Europe, which is forcefully literalized by the manic red, white, and blue car chase that runs roughshod over the roads, churches, steps, monuments, and rooftops (!) of the grand Piedmontese metropolis.

See?  A perfectly straightforward caper, with its single biggest wrinkle being the incorporation of some serious vehicular stuntwork, plus a national rivalry that's far too quaintly-expressed to get especially worked up over, particularly since the Italians seem to be such good sports about it.  But actually straightforward in the presentation?  Not really, no: heist films, as you know, tend to be one of the most rigid genres imaginable—so much of their pleasure is bound up in their basic formula of explicating a plan, seeing it go awry, and watching its participants scramble to retake control (or, at its most pleasurable of all, it turning out they were always in control, even when it seemed to us like everything was going to hell)—and The Italian Job is, well, not that.  It's the opposite of rigid.  It's a loose, even larky piece of cinema, routinely deviating from its plot for the sake of blind alleys, and to the extent it's been described as a comedy, I guess this fits it as well as anything else, though even for a comedy it's exceptionally unfocused.  It's not too far off, I suppose, from something like Topkapi, but while Topkapi is intriguingly silly and irritatingly zany in pretty much equal measure, even its profound silliness seems to be arrived more honestly as an expression of its characters' own colorful personalities, rather than something imposed on it from without, and The Italian Job definitely feels more artificial and, to a degree, clunkier, though I'd say it's a push as to which actually is more entertaining or charming.

And so The Italian Job actually takes a long time to even get started, spending an inordinate amount of screentime on Charlie's reunion with his girlfriend Lorna (Maggie Blye)—she treats her man to a buffet of sex workers the instant he's released, which is very generous and modern of her, though she naturally reserves the right to get pissed when he cheats on her with a couple of gals she didn't hire—and, of course, the movie has no reason whatsoever to spend time on any of this beyond the first gag of Lorna's army of escorts, except to emphasize to an exacting degree just how very much hot 1960s sex Charlie is having.  More than James Bond, that's for sure!  He also bangs Beckermann's widow.  And then, the instant they arrive in Turin, Lorna leaves and never comes back, making every prior scene with her a total waste of time, at least by this genre's standards of narrative efficiency.  Meanwhile, The Italian Job has its own fair share of colorful cartoons, played by some of the most well-known British media presences of their age.  There's Hill's lascivious, sex-offending computer scientist (these jokes, based on Prof. Peach's penchant for plump posteriors, largely write themselves).  Likewise, there's Coward's Minister of Crime, or his Duke of the Prison, or whatever the hell he's supposed to be—though the bizarre manner in which Bridger flexes his unquestioned authority over literally everybody he meets, including the actual warden, is perhaps the most persistently entertaining part of the whole film.  I don't necessarily mean funny—most of the things that are actually funny in The Italian Job involve Caine dropping snark on people—but wild, and woolly, and the opposite of boring.  Caine, Hill, Coward, Blye: they're always busy every second, consistently making the film they're in too strange to ignore.

Which would be hard enough anyway: the first thing one will notice, I presume, is how astonishingly overdirected it is, courtesy Peter Collinson—a journeyman in a literal sense, and for his sin of helming the most startlingly jingoistic heist movie I've ever seen, he wound up wandering the whole planet to make his movies—and it's not even "overdirected" in the same ways that 60s caper movie can often be overdirected, e.g., The Thomas Crown Affair, and the way Norman Jewison made a game attempt to emphasize the complexity of his film's plot with its cut-up images, while also occasionally swerving into aggressive psychedelia.  The Italian Job's never remotely that ambitious in its technique, though it maybe has something of the same goals, apparently wanting to exist in some uncertain place between a Richard Lester comedy and a Michelangelo Antonioni art film.  This is possibly even deliberate, rather than Collinson just throwing shit against the wall to see what stuck, and while a surprising amount sticks pretty well, it takes at least an hour of runtime before it becomes anywhere close to graceful about it.  Thus does Collinson attempt (somewhat inconsistently) to create evocative geometric patterns in his blocking, starting with some of the very first images of the film, with the black-suited mafiosi positioned in stairstep array like they're about to burst out into a musical number (and, in fact, The Italian Job has something extremely damn close in store).  In much the same vein, Collinson elects to have his DP, the great Douglas Slocombe, shoot something like half this Goddamn movie from low angles, and I don't have any idea what they were trying to communicate with this, except that with such a preponderance of acute compositions, The Italian Job looks unsettling and weird, and "unsettling weirdness" is I guess The Italian Job's whole point.

Then again, if that's the goal, it accomplishes it, and The Italian Job's claim to fame is one of the most justifiable in 60s English-language cinema: that Mini Cooper chase through Turin.  Just for starters, it's remarkable alone that they actually did it, and the physicality of the locations and the cars and the bystanders has already done a lot before you even get into the extended length of the sequence, or the sheer beauty of the achievement, which ultimately arrives at an almost abstract level of visual pleasure as Charlie's Minis slalom down the darkness of an enormous drainpipe.  And, seeing their plan come together, you're irresistibly impressed by how complicated and smart it actually was—it's not not a heist film, after all, just an exceedingly offbeat one—and The Italian Job celebrates its own success by way of a tremendously well-done piece of intercutting and cross-cutting, between Charlie's joy in his moment of triumph and Bridger getting hailed as the hero of Britain back in his prison, which is downright mesmerizing in its rhythmic, chanting musicality, so good that even the clomping anthem "Getta Bloomin' Move On" (better known as "The Self-Preservation Society") becomes a catchy tune when heard in combination with it.  I'm also quite in love with the non-ending ending (more than a little reminiscent of Wages of Fear, but so very much more fun, and I like this movie vastly more than I like that bloated thing), with the only possible caveat being that it's a pity that the one person in the whole movie who fucks his part of the plan up is the one black guy.  But, that objection aside, it's a grandly memorable conclusion—the one Collinson and producer Michael Deeley went with after no fewer than four unsatisfactory endings from screenwriter Troy Kennedy Martin—and it's no surprise that the extended finale of the film, from the Mini chase to the Swiss border, has remained part of the pop cultural consciousness, particularly in Europe, where phenomena such as Mini Cooper benefit races in Torino, and science challenges to "solve" the physics problem of The Italian Job's final frames, persist to this day.  The Italian Job is something of a fucking mess of late 60s cinema and mod British style, to be sure.  But I'd be the last to deny that it's earned its place as one of the most enduring representations of its era.