Busby Berkeley: When good Americans die, they go to Paris 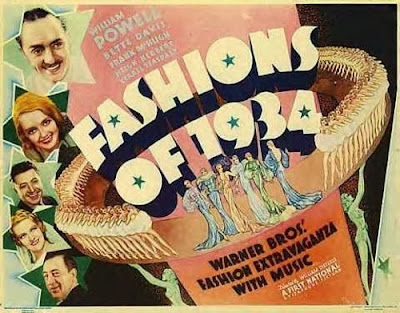 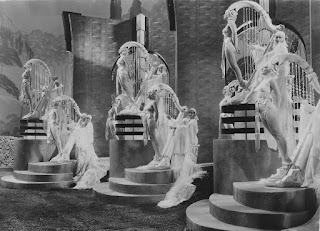 Fashions of 1934 is "a Busby Berkeley movie," and it is, furthermore, "a Bette Davis movie," though its status as either one has grown pretty attenuated over the years.  In Berkeley's case, it's because while its centerpiece sequence earns it a place in any respectable compilation of the choreographer's achievements, it only has the one, single number to recommend it as "his" movie.  (The credits say "numbers," but besides a brief little non-musical piece of set design eye-candy involving dresses toward the end, that looks like it might've been Berkeley's effort, what we have is otherwise entirely the creation of its director, William Dieterle.)  In Davis's case, it's because the movie arguably contributes even less to her legacy than Berkeley's, at least in any positive sense.  The only important thing about it on that count is that it served as the first climax of her quarrels with Warner Bros. management, representing the final and most aggressive attempt by Jack Warner to turn her into a standard-issue glamor girl, something that she resented immensely and which, in any event, didn't work out well enough financially for Warner to continue resisting her efforts to get herself attached to roles that she felt better-suited both her talents and her looks.  (Davis was unnecessarily hard on herself in the latter regard, but then, strange as it may be to say considering what a big star she became, so were her colleagues in her formative years as a performer.)
Nevertheless, as Davis perhaps comes up more often than Berkeley, I suppose that Fashions is likely best known for being one of the last things Davis did before she got herself loaned out to RKO to do Of Human Bondage, the success of which allowed her, when she came back home to Warners, to work somewhat more upon her own terms, at least until their next quarrel began.  As for Berkeley, whose involvement was clearly a little more incidental than Davis's, presumably he shrugged off its middling box office, and just kept on keeping on, though I guess it was around this time that he became a dangerous drunk.
So if it is a little more obscure than some other films to which he contributed*, and treated more as a footnote to someone else's career rather than a significant work of his, that's kind of a shame.  I mean, it is minor Berkeley, undoubtedly.  Quantitatively, it would be hard to describe it as anything else.  But Fashions is a fun little confection—and if Warners roughly plugged a Berkeley musical number into their in-development non-musical comedy simply because said musical numbers had proven popular the year before, then they must have at least done so early enough for the script to build up to that number as a culmination of its major plot.  Better yet, that number is absolutely top-tier Berkeley, maybe a slightly humbler example of his craft than the prodigious setpieces he'd done previously for the studio, in Gold Diggers of 1933 or Footlight Parade, but perhaps the circumscribed scale forced him to hone in on pure visual pleasure rather than the sprawling (and unsatisfying) one-act plays that comprised the majority of his contributions to the latter.
So: as with seemingly every comedy made during the Depression, Fashions begins with a venture going out of business.  In this case, that's Golden Harvest Investments, run by one Sherwood Nash (William Powell) with the help of his assistants, the loyal Snap (Frank McHugh) and the rather more fickle Glenda (Dorothy Burgess).  We make Sherwood's acquaintance as a repo man patiently waits for him to finish a "phone call" before informing him that, actually, he's here to take the phones and knows they were disconnected three days ago.  Things look bleak, but when Snap introduces Sherwood to a young fashion designer, Lynn Mason (Davis), he gets the idea for an entirely different racket. 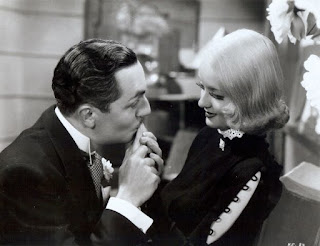 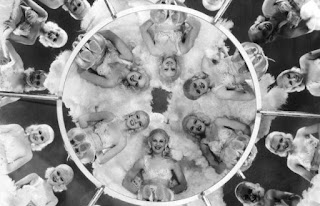 Which brings us to the main attraction, the Berkeley, and it's fantastic Berkeley, presented as the climax of Sherwood and Baroque's whatever-it-was-supposed-to-be (we only see the end of it, and by "it," I naturally mean "a Berkeley fantasy sequence that has no obvious diegetic connection to the events on the stage, or even the stated reasons for putting on the show").  So, as Mabel sings Sammy Fain and Irving Kahal's "Spin a Little Web of Dreams" (another pleasant but undistinguished piece of 1930s pop, sung with such overriding vocal affectation that its lyrics are almost wholly unintelligible), a playlet unfolds next to her on stage, involving a young blonde woman in a sweatshop combing ostrich feathers.  Exhausted, she rests her head on the bed of feathers, whereupon we are transported out of stagebound reality altogether.
The first place we visit is a music room fit for the gods, where golden women play bejeweled harps made out of other women, an astonishing and bizarre piece of surrealist production design that I wish Berkeley had let us soak in for a little longer than he does.  This dissolves into a pre-Code sexual wonderland of women in blonde wigs much cheaper than Davis's, and barely covered otherwise by a combination of fancy lingerie and feathered fans.  This gives us a heavenly five minute meditation on all the possibilities Berkeley could find, in his customary style, for feathers, curvilinear set design, barely-differentiated grayscales, and objectification, which works out outstandingly well.  (If it's not the most genuinely erotic thing in his oeuvre—it's never jokey like Berkeley numbers usually are about their sexiness—then it's at least the most erotic so far.)  The bodies and plumage create a vision of textured whiteness, with feminine figures emerging from abstract cloudlike masses of feathers, moving hypnotically in rhythm with the soothing song, and finding various geometric arrangements, including an endless undulating wave of fans, and a kaleidoscopic pattern that presents itself as a blooming white flower; the sequence finally concludes with the riverboat of Venus, which, like the harps, is also partially constructed of blonde women.
There's probably some sort of objection one could have with this, but I'm not the one to make it; I'm content to accept that Berkeley's goal was to celebrate black-and-white cinematography and chorus girls' athletic butts, and, on both counts, he outdid himself.  It certainly elevates a film that would've merely been an acceptable diversion with an iffy third act, and while there's no question that Fashions of 1934 would've benefited from more Berkeley and a role that Davis didn't feel embarrassed playing, it's equally true that it should be remembered a little more fondly, and a little more frequently, than seems to be the case.
Score: 7/10
*Albeit far from the most obscure, and I've even skipped his fourth 1933 musical, Roman Scandals, which he did for Goldwyn.
Posted by Hunter Allen at 9:16 AM