Cardboard Science: Challenger of the unknown 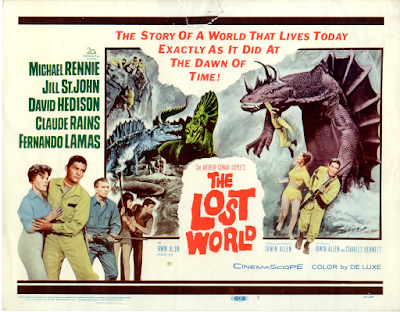 It is an eternal truth that no movie named The Lost World can ever be any good.  This is true of The Lost World: Jurassic Park, Spielberg's backwards-titled 1997 follow-up to his 1993 superhit, which was named in homage to Arthur Conan Doyle's 1912 speculative fiction novel, and which is in the running for the least-essential theatrical film of its director's five-decade career.  It is true, also, of the 1925 adaptation of the Doyle story, which thanks to Willis O'Brien's special effects innovation remains a cinematic landmark—maybe even essential viewing for anyone interested in film history—and which is also sufficiently boring otherwise that it's no oversight that people usually just teach King Kong instead.  Finally, it is terrifyingly true of Irwin Allen's adaptation, which is unbearably horrid for a sci-fi adventure done with anything like actual studio resources in 1960 A.D.
Produced and directed by Allen for 20th Century Fox, it was his narrative feature debut after a career in documentaries; it was co-written by Allen as well, in alliance with Charles Bennett.  It does not get more inauspicious than this, and while the man objectively became an industry giant in the years to come, I don't know how The Lost World was successful enough to even let him do Voyage to the Bottom of the Sea immediately afterward.  Even on the level of "matinee adventure for idiotic twelve year old boys" that it was pitched at, it's bad.  It's bad for adults in 2020, for sure—let's not let that slide—representing a veritable smorgasbord of nastiness.  It's sexist and it's racist, of course (arguably, it's more sexist and more racist than a novel written in 1912).  It has animal cruelty and calls it "special effects."  It wastes and humiliates not only good actors who had long and august careers behind them, but in Jill St. John, at least one actor with a somewhat noteworthy career still to come.  It is stupid beyond belief.
It is also horrendously boring, and boring in a fashion that seems like it ought to have transcended any cultural context, coming off just as boring to a kid in 1960 as it does today.  It's not even boring like its 1925 predecessor was boring: that Lost World is merely sleepy in the manner of many silent cinema programmers, but it still basically lived up to the idea, "a lost world of prehistoric beasts."  Allen's Lost World isn't even really about dinosaurs, and despite Allen roping in the 74 year-old O'Brien as his special effects technician (who one imagines spent this production twiddling his thumbs), it barely even pretends to be about dinosaurs.  In this extremely-long-feeling 97 minute film, maybe five are devoted to the dinosaurs—or I should say, ahem, "dinosaurs," with scare-quotes carved out of rock and set a mile high, like the logo for a Bible film, and perhaps also with alternating capital and lower-case letters.  That five minutes goes up to six, I suppose, if you include a giant skeletal ribcage, though obviously this is better described as a piece of set design; but the five minutes drops to roughly three, if you don't count obscured rustling in the bushes.

Then again, who knows what choice Allen had: his excuse, in later years, was that Fox gave him just enough money to agree to make the movie, and not anywhere close to enough to make it good, which, adding credibility to Allen's claim, does at least explain why he hired O'Brien to do stop-motion animation for a movie that has no stop-motion animation in it.  Instead, Allen took recourse to tricks at least as old as Hollywood's other ur-dinosaur picture, One Million B.C., with one scene in particular being a straight-up restaging of the exact same notions exhibited there.  These live reptiles (so-called "slurpasaurs") are, I guess, not even charmless at first, when they're merely frightening our heroes by way of semi-adequate process shots and editing—there's even a lateral tracking shot of a tegu lizard with junk glued to its head, stalking through a plastic "jungle" and, indeed, slurping at the air with faint menace, that's surprisingly effective.
Whatever charm there could be to a tegu in a hat emerging from a bubble bath to gnaw on a plastic figurine of a guy, however, has long since been exiled from this film by the time it happens.  In the years since its 1940 release, One Million B.C. had been exploited heavily by B-filmmakers who wanted to do dinosaurs but had no budget, and I try not to despise them for that, even though what One Billion B.C. did to its animals was despicable, because at least they didn't make the ugly footage.  Unfortunately, the tiny bit of sweat equity Allen put into his dinosaur movie was to shoot new footage, in color and in CinemaScope, which meant, necessarily, an all-new tegu thrown into a box with an all-new crocodile for his centerpiece "dinosaur" battle.  Assuming that "unstaged animal combat" can have merits in the first place, it's terrible on whatever those merits would be—it's so disaggregated by the editing that they may not actually be fighting, at least not fighting for their lives, which I rather hope was in fact the case—but it's a disgusting and disquieting piece of real-life violence nonetheless, and so one must remind oneself not to complain too much about the absence of dinosaur action in this dinosaur movie, insofar as that's kind of like watching a snuff film, then complaining that not enough people get murdered on camera.  And it costs Allen more respect from me than all the crappy first-time direction in the world, and that's a pity, because I might be about the only person on Earth who thinks Allen was ever worthy of much respect in the first place.
Score: 1/10
That which is indistinguishable from magic:

Oh, come on, Irwin.
The morality of the past, in the future!:
Sensawunda:
Posted by Hunter Allen at 5:58 AM