Census Bloodbath: For me to poop on 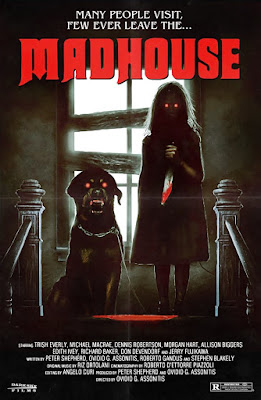 MADHOUSE
aka And When She Was Bad aka There Was a Little Girl
Halloween might be cancelled, but it's still October but it's still early November, for which I apologize, though now that the true terror and pain is over, perhaps we can catch up.  Either way, it's still within the general timeframe prescribed for that mix of peanut butter and chocolate we call The Switcheroo, with Brennan Klein of Popcorn Culture and Alternate Ending doing my weird, gross, nostalgic 1950s sci-fi thing for a spell, whilst I do some nice, wholesome slashers from the brightest days of the 1980s.
1981
Directed by Ovidio G. Assonitis
Written by Stephen Blakeley, Peter Sheperd, Roberto Gandus, and Ovidio G. Assonitis
Spoiler alert: moderate

First thing: Madhouse is a movie about an evil twin, described explicitly as an evil, identical twin, and even though she's on camera multiple times, nobody thought it would be a good idea for the same actress who plays the good twin to play her, even for one close-up.  I'm not expecting rigorous, motion-controlled splitscreen (it's 1981, so obviously I'm not).  I'm not even expecting a medium-intensity effort.  Just some effort.  But that's not even really trying, you know?
Madhouse tries in other ways, at least, and while it's still a touch slapdash, it's slapdash in mostly the same respects as any other random American slasher of 1981, which isn't necessarily bad, and, indeed, is in itself an achievement, since you might not quite guess it's actually an Italian one.  It kind of isn't anyway, despite being released in Italy first, despite a largely-Italian crew, and despite being produced, co-written, and directed by Ovidio G. Assonitis, who (for simplicity's sake) we shall likewise deem "an Italian."  Assonitis (sounds like it hurts!—sorry, I promise that's the only one) no doubt remains best known as an uncredited co-director, and for doing everything James Cameron will never admit to doing on Piranha II.  But maybe that's unfair to the B-producer, who was more influential as a businessman than he ever was as a creative: his legacy in cinema spans across the decades, from his role in creating a more-integrated Southeast Asian film market in the 60s and 70s to his presidency and attempted resuscitation of Cannon in the 90s.  Nevertheless, the mogul did make a few movies all on his own, and Madhouse was one of them.
You would not be shocked to discover its Italian substrate, of course, and yet the Italianness it retains sneaks up on you: it initially only makes itself apparent in a few scattered shots (particularly the abstract weirdness of a human figure lost inside a pocket dimension created by shimmering plastic hospital curtains), and doesn't become obvious till it reaches a final act that dispenses with dramatic logic, and, more tellingly, goes on for, like, ever—or, at least, far longer than its now-wrenched-apart story can bear.  Even here, however, the dumbassed twist that wrecks Madhouse is, to a very large degree, an Americanized one.  (The most Italian aspect of it is that it involves Catholicism, which still feels Protestant in the execution.)  Meanwhile, it isn't full of Italians pretending to be Americans, and, moreover, it was shot in America—in Savannah, GA, USA—and for all that Assonitis makes Savannah, GA, USA read as "New England" (at least up until somebody named "Beauregard" blunders into the picture), New England's close enough.  And that location shooting?  That's precisely the kind of genuine effort I was talking about, that Assonitis absolutely put into this goofy slasher.

So, in Savannah, Julia Sullivan (Trish Everly, in what appears to be her only film), has made a life for herself as a teacher at a deaf school, where she's become good friends with her colleague Helen (Morgan Hart), and forged a strong bond with her obvious favorite student, a lad with the extremely normal American name of Sasha Robertson Jr. (Richard Baker).  Even before they lay out her backstory, however, we can guess that Julia's crawled her way out of a nightmarish childhood, for the very first thing we see in the film is also its boldest (and arguably most Italian) gambit, a very long push in under the credits on a pair of figures suspended in a black void, while a low-key creepy version of "When the Wind Blows" fills the soundtrack.  Eventually coming close enough to resolve themselves as a pair of twin girls, one mechanically rocking her catatonic-seeming sister in a chair, at pretty much the precise instant we can read this unsettling image, the one doing the rocking picks up an object and smashes the catatonic one's face in.  The implications of this sequence will in no sense truly inform our drama (for it seems like it would have to be our heroine doing the violence, and yet it's not even really mentioned again, not even in a climactic villain speech); but it does set the stage for Julia's visit to the hospital alongside her priest uncle, James (Dennis Robertson), where they keep her poor "identical" sister, Mary (played by Allison Biggers, because I guess it was too much to even hire a second redhead).  Mary has long been an invalid, victim of some flavor of neurofibramatosis, which has, contra most types of NF, tortured her with constant pain, while also marking her in ways that suggest the make-up folks have only a very vague idea what NF tumors look like.
Though Mary seems to be no threat to anybody but herself, Julia can barely muster the courage to speak to her, citing some nebulous history of abuse at Mary's hands that involved a frightening hound.  We'll soon see there's a lot more truth to this than Father James is willing to admit, and whatever the case, Mary hates the living hell out of her beautiful, healthy sister, and the instant she recognizes the sibling at her side, begins to rant and rave about her revenge, and Julia runs terrified back into the hall, leading to an astonishingly poor scene transition from Mary's hospital to Julia in a doctor's office, which leaves it up to you to determine if Julia has fled here in fear and is now horny for the stranger in the white coat who just walked in.  It's actually just her boyfriend, a doctor at a completely different hospital, Sam Edwards (Michael Macrae), who would be a more active character in this film, no doubt, if he weren't always so busy with his job.  This shall leave Julia alone, and just hours after her visit triggered Mary's implacable rage, her sister has escaped from the hospital.  Soon all the people between Mary and her revenge—besides everyone already mentioned, there's Julia's New Agey landlady, Amantha Beauregard (Edith Ivey), Julia's handyman/handy racist caricature Kimura (Jerry Fujikawa, affecting a broken-English Japanese accent that is belied totally when he drops a flawless voiced retroflex approximant), and Leroy (a cat)—will meet Mary's very real evil dog, if, obviously, probably not the same evil dog Julia described to James.  Or maybe it is supposed to be the same dog, for Madhouse is not very thoughtful, despite insisting otherwise all the time, what with its rare genetic disorders that it dares you to look up since if they're twins, they should both have it (not necessarily, actually), and taking its alternate titles from a Longfellow poem, and finally dropping a big ol' Shaw quote right there at the end.