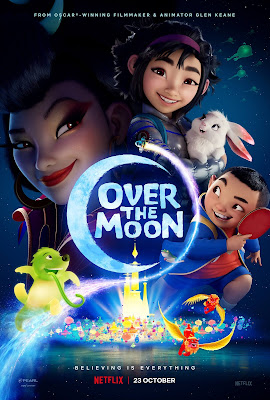 OVER THE MOON
2020
Directed by Glen Keane and co-directed by John Kahrs
Written by Audrey Wells
Spoiler alert: moderate 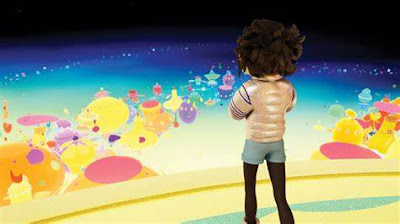 I do not know if you can sell a movie to more than a handful of people on the name "Glen Keane," though as I am one of that handful, I probably went into Over the Moon, his long-delayed feature animation directorial debut, with somewhat miscalibrated expectations, despite the efforts of everyone on the planet to lower them.  Not least amongst that multitude was the Chinese theatergoing audience, who showed up in numbers sufficient for the film's box office in that country—the country it's about, mind you, and was sort-of made in—to end up totaling a bit less than $900,000, or, to make that number really ugly, less than one tenth of one cent per Chinese person.  So, yeah, pandemic aside, I can say pretty definitively that you cannot sell a movie to China on the name "Glen Keane."  As for the Netflix numbers—for that is how it's been distributed here—I assume they're better, but who the hell knows.  Sadly, I cannot report that its flameout is much of a shame, for whatever its intentions were, Over the Moon comes off as exactly the kind of ephemera that's become Netflix's entire business model.  It's the sort of thing that sat on their dashboard for exactly one week before sinking into eternal obscurity, and it feels like the result of a whole series of pyrrhic victories that bled it white before it could ever even begin to be made.  But, you know, Pyrrhus accomplished some amazing things in the process of losing.  You can credit Keane with a few spectacular victories here, too, even if by the very act of achieving them he consigned himself to losing the war.
Keane, you probably know, has spent a lifetime in animation, and it's fair to say he's earned a master's reputation in it—as I doubt any capsule biographies are required for anybody actually reading this, let's just say he was one of the vanguard figures of the Disney Renaissance—and while I don't know precisely when "director" became his life's goal, seeking out a film to call his own has defined his whole career throughout most of the 21st century, so that now almost half his working life has been spent in pursuit of it.  It was denied him at Disney—despite getting so close with Tangled that he's still in many respects the person most responsible for its enormous success, or at least its success as a work of groundbreaking CG animation—and so he struck out on his own.  He won an Oscar in the long interim, albeit for a short, and the best explanation for how he wound up on Over the Moon is probably just that he came into possession of a cursed monkey's paw, for it appears that former DreamWorks subsidiary Pearl Studio was interested in Keane above all because they presumed that he would compromise in every essential way in order to fulfill the company's mandate of making an algorithmic mash-up of Disney Renaissance storytelling and DreamWorks humor for the purpose of global family consumption.
Now, I'll reiterate that Keane manages to do something with this.  It's just never on a narrative level, and so while "algorithmic mash-up" accurately summarizes the sensation of absorbing Over the Moon's plot and characters, what I really want to emphasize is just how robotic it is.  The idea that Audrey Wells wrote her final screenplay alone (she is, in any event, Over the Moon's sole credited writer) throws a hot light on Keane's pre-release assertion that Disney and Pixar and DWA movies are made by committee, but this was, like, art—you gotta play the game, I guess—because if all a single voice managed to produce was this hollow simulacrum, then maybe a committee should have gotten involved.
It is, in any event, especially hard going at the outset, as we settle into a tale of loss and grief centering upon 14 year-old Fei Fei (Cathy Ang), whom we initially find as the daughter of a pair of loving parents (Ruthie Ann Miles and a terrific waste of John Cho's talents on approximately eight lines of dialogue), who jointly run a moonpie stand somewhere in China.  As our protagonist is happy, this situation obviously cannot be allowed to stand.  Thus, as Fei Fei's childhood montage proceeds, her mother starts to wobble a bit, and then stops existing in between cuts.  Fei Fei has never quite gotten over this unsatisfying editing ellipsis, and despite excelling at science and math she persists in believing in comforting but childish fairy tales long past their expiry date, particularly the story her mother told her of the moon goddess Chang'e, who lost the man she loved, but never forgot him, and always honored her vows to him.  Fei Fei draws a natural parallel between her father and the deity, which is why she cannot even begin to handle it when he brings home the new woman he will marry, the widow Mrs. Zhong (Sandra Oh).  Making matters worse, Zhong comes in tandem with her son, Chin (Robert G. Chiu), the quintessential annoying stepbrother.
Fei Fei will have none of this, and uses her scientific precocity to design and build a fireworks-powered rocket to the moon, not to ask Chang'e to be her new mom or ask her to bring her mom back from the dead, nor anything useful like that, but merely beseech the goddess for proof that she's real, thereby somehow shaming her father with the example of a deity whose whole deal is that she's been cursed to eternal loneliness.  Fei Fei's rocket would've made it (this is Fei Fei's assertion anyway), except that Chin smuggled himself aboard and threw off her weight calculations.  Luckily, they do not plummet back to Earth and die: instead they have gained the moon's attention, and a tractor beam pulls them the rest of the way, where they find a massively colorful celestial kingdom, and learn that Chang'e (Philippa Soo) is very real indeed—though this may not necessarily be a good thing. 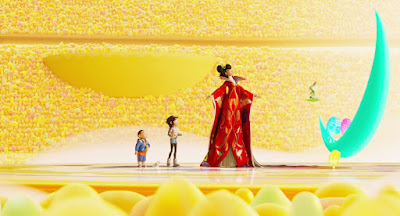