Disney's Challengers, part VII: Your mother can't be with you anymore 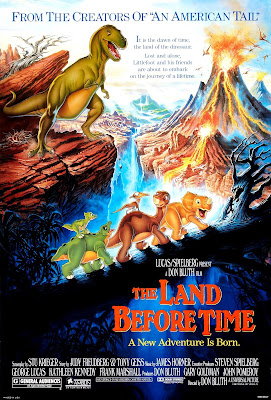 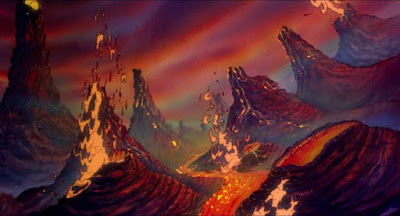 I have, it seems, spoken out of turn about Don Bluth's third animated feature, The Land Before Time.  I've said things like "it's not as good as you remember," and "it's no classic," and "maybe it's not even as good as The Secret of NIMH," and I regret them.  I expect this has something to do with the odd fact that, despite being a very popular family film, it didn't have a good home video presentation until as late as 2015, and the last and only other time I saw it as an adult was on a shitty DVD sourced from a cropped scan for VHS.  I also wonder if I was just in a crabby mood for that viewing, or even if I was unduly sensitive to this one, for besides the whole "climate catastrophe" thing that drives its plot, there are a lot of scenes of newborn dinosaurs who, in their faintly-confused laziness, tore my heart out in every frame because they reminded me of my cat who died last month.  (And I don't think I'm just imagining that: for whatever reason, the model for much of Bluth's baby dinosaur animation really does seem to have been "feline," though I suppose I approve.)
That's my obligatory disclosure, though I think, once you finally see it on a proper blu-ray, it can surprise you how good it is.  It is not the perfect movie, but it is so much the platonic ideal of the kid's movie—dinosaurs! action! cuteness! color-coded characters! awesome Diana Ross ballads! (why not!)—it's like somebody built the thing in a lab.  And that is sort of exactly how it came to be: The Land Before Time was the brainchild not of Don Bluth, but Steven Spielberg, and it represents Sullivan Bluth Studios' second and final collaboration with Spielberg's Amblin Entertainment, the closest thing there was to a factory for making perfect kid's media as existed in the 1980s.  For his second production with Bluth (the first being the very successful An American Tail), Spielberg even brought in his friend and colleague George Lucas, just in case there was any sector of the kid's audience Spielberg might have missed.  Thus "the platonic ideal of a kid's movie" is pretty much how it shook out, and it has the thirteen sequels to prove it.
That is not exactly how it started, however; Spielberg and Lucas's original plan, believe it or not (and it is frankly very hard to believe they entertained the idea for long), was to have a dialogue-free tale of the most lightly-anthropomorphized dinosaurs possible, drawing heavily upon Walt Disney's mystic exploration of prehistory in the "Rite of Spring" sequence of Fantasia.*  At some point very early in development, the uncommercial austerity this would've necessarily imposed was abandoned, though Spielberg, Lucas, and/or Bluth's approach did not deviate that much, so that the "perfect kid's movie" turns out to be "Fantasia's 'Rite of Spring,' but with the plot of the first half of Bambi, and filtered through the sensibilities of a Saturday morning cartoon show," which I suppose is how this film was so easily able to kick off almost two decades' worth of feature-length direct-to-video episodes.  It does not quite capture the majesty of either of its two biggest influences, but it sometimes comes close—on some other metrics, it legitimately exceeds them—and I might be willing to give it the top spot as Spielberg's best dinosaur movie, too.  After all, Jurassic Park is scarcely less "for children," plus it has a bunch of condescending, moralizing humans running around and gunking up the appeal of the premise.  Meanwhile, The Land Before Time is so beautifully bite-sized: at an hour and nine minutes, I wonder if it's the shortest feature film given a major theatrical release since the 1950s.  (In recognition of this, it was released with a Brad Bird short.) 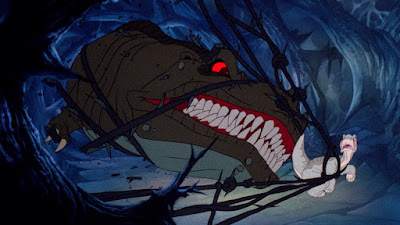 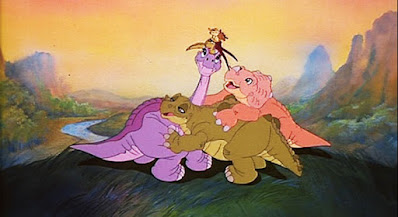 Oh, I give her a hard time, but Cera's okay.
If you recall Land Before Time (and you almost certainly do), you will have noticed that I'm referring to the first half a lot more than I am the second.  It's true that it's a very frontloaded film: most of its really amazing stuff arrives immediately, one scene after the other, in a film that is somewhat split, between the magnificence promised by those extremely Fantasiaesque opening credits and the marketable band of plush-ready dinosaur pals who eventually crystallize around our hero.  The only thing that is uniformly strong throughout is James Horner's lush but delicate score, which (talking miracles) is not just Horner trying to keep his Trek scores from busting out instead.
If the film peaks early, maybe that was unavoidable: the first act closes with the loss of Littlefoot's mother, and if you remember that I said that Land Before Time actually exceeds its influences in very (very) narrow ways, this is what I mean.  I'm on record as saying that the death of Bambi's mother doesn't matter much to me.  But the death of Littlefoot's mother?  Apparently, it fucking wrecks me.  If you do not cry at her brave attempt to stand after her fatal injuries, and the way she fails under her own weight, cracking the rock beneath her, while Littlefoot uncomprehendingly wonders what's happening to her, you might, like my spouse, be a sociopath.  (I think I'm kidding...)  And so, unlike Bambi's more objective (and perhaps more admirable) depiction of a deer losing its mother and getting over it in the space of a cut, Land Before Time demands that you soak in Littlefoot's extremely human-like grief for long minutes representing days or weeks of the apatosaur's life.  It's a grief that manifests, in his starved, thirsty brain, as pitiful hallucinations of his mother—hallucinations made all the more affecting because even though this is a cartoon and hallucinations are "easy," we only see what is really, actually happening, namely Littlefoot desperately chasing down his own shadow and affectionately licking a rock.  (I am also a very big fan of what may be the most Disneyesque thing in this movie that isn't a direct copy: it's a little bit of silent animator's joy, involving a family of squabbling pterosaurs being fed by their mother, and the smallest, most sensitive one offering poor Littlefoot the small piece of fruit it had acquired at great effort.  Terry Malick stole the basic idea for The Tree of Life.  It's true, ask him.) 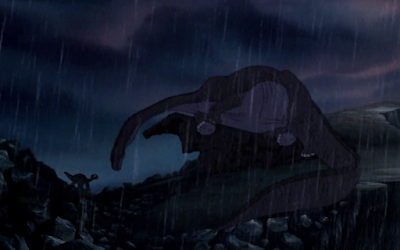 The upshot is we spend a whole second act being invited to constantly bawl, and God does it work—almost to the point of overkill, considering the softness of its intended target.  But while most of the best action and all of the dampest emotions come early, this is not to say that what comes after is at all bad—there's only like half an hour left, so it would barely have the chance to be—and what we have thereafter is some solid Incredible Journeying, founded upon an unusually severe tragedy and, indeed, undertaken across an unusually severe symbolic hellscape, even for an 80s Bluth cartoon.
This is where I have something genuinely negative to say about Land Before Time, but I'll start with the positive anyway: the Bluth aesthetic is ideally suited for a tale of dinosaurs trudging across a drying, dying planet.  Like NIMH and An American Tail, Land Before Time has the same moodily diffuse photographic reproduction that, for whatever reason, seems to have attended Bluth's early features, and it bears a surprisingly dark palette for a kid's movie—there are so many burnt orange twilights here—and Land Before Time, set in the midst of the literal end of a world, gets to push the Bluth aesthetic even further, with its spectacular geological fancies and its small oases picked clean in an instant by gangs of ravenous adult sauropods.  It is, even so, the first Bluth film where the backgrounds let you down, with our characters frequently inhabiting some very vague spaces—in a Bluth movie, it seems, you can't have "actually good character animation," "good story," and "uniformly good backgrounds" all at once, because then you might confuse it for a masterpiece.  It's still atmospheric as anything, and the absence of any story objections lets this atmosphere settle better than either of its predecessors; but sometimes the shot opens up into a sub-Mary Blair storybook image of a "forest" that consists of about five brushstrokes per tree, and you remember you're watching something that was churned out too quickly for its own good.
It remains a great success, and one whose legacy has been so ruthlessly exploited by its distributor, Universal, that it's easy to underrate it for the achievement it actually was.  And this achievement was not just artistic: Land Before Time opened on the same weekend as Disney's Oliver and Company—and Land Before Time won.  (The ultimate box office totals suggest more of a tie, but even tying Disney is a hell of a thing.)  The downside was that, whatever heartfelt emotions the thing imparts, Bluth himself found it a millstone around his neck.  He'd had the idea of it imposed on him by Spielberg and Lucas in the first place; and, shockingly, Spielberg and Lucas had notes.  Bluth spent the entire production chafing under the twin yokes of the two moguls—Spielberg, fearing for the kids despite being the guy who asked for this stuff in the first place, even cut full minutes of finished animation deemed "too scary."  (It's strange that Universal has never done the obvious thing and released a director's cut.  It seems like easy profit, but perhaps it has more to do with what Spielberg's excisions entailed—it's not like there's some "gore cut" of Land Before Time that Spielberg ruined.)  Insofar as Bluth's whole artistic personality can be boiled down to "don't tell me what to do," perhaps it's no surprise that this put an end to Sullivan Bluth's collaboration with Amblin.  Lord, does that ever make Don Bluth look like a fool: Spielberg's not a god (well, time will tell), but in 1988, it's hard to imagine a better friend to the cash-strapped artist, and it was practically inevitable that Bluth's pictures afterward became smaller and less likely to reach an audience.  But here stands The Land Before Time: maybe his finest work, and as much as Bluth's entire goal as a filmmaker had always been to recapture Disney's legend, I suppose it was only logical that it required him to rip off Disney's finest Golden Age classics wholesale to get there.  Indeed, the next time he'd touch greatness, it was much the same story, though in that case he was invited to rip off something much more contemporary.
Score: 9/10
*Fantasia being the film we watched to comfort ourselves when we got back from the veterinarian, maybe now I simply associate Fantasia and even things merely like Fantasia with my cat's death.  Excelsior.
Posted by Hunter Allen at 2:05 PM