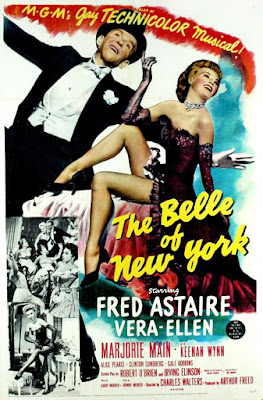 THE BELLE OF NEW YORK
1952
Directed by Charles Walters
Written by Chester Erskine, Robert O'Brien, and Irving Elinson (based on the play by Hugh Morton)
Spoiler alert: moderate 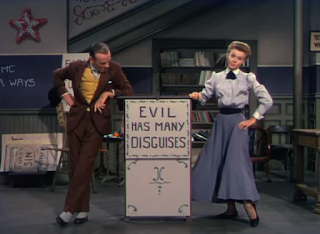 There are several contenders for the most dance-heavy of the dozens of dance-heavy Old Hollywood musicals, and I've made ill-advised claims about the subject before: something like Give a Girl a Break can feel like it's entirely made out of dance sequences simply because its dancing is more narratively dense than its screenplay; and something like Invitation to the Dance, of course, literally is an all-dancing anthology film, the most ambitious hour and a half of Gene Kelly's career; and there are the revue-style movies (Ziegfield Follies, for example) that fling their unrelated song-and-dance numbers at you, and depending on how you're counting it, they could have a lot.
But as far as integrated musical narratives go, The Belle of New York might be the winner.  This is not necessarily to its credit: the nearly 40 minutes of dancing provided by Fred Astaire and Vera-Ellen is, by and large, and needless to say, great (sometimes astoundingly great, like "top 10 MGM musical dance sequences" great), but it's hard to say it's always carefully-deployed, given the way the sequences are jammed into one of the flimsier plots even a mid-century musical ever got away with, including two duo routines stacked basically right on top of one another with almost exactly the same basic point, and a special-effects driven solo with Astaire that reaches for some profoundly ambitious ideas (not quite "Royal Wedding ambitious," but arguably in its league), and exceeds its technological grasp almost right away. 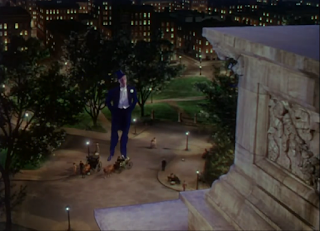 The Amazing Colossal... Fred?
Plus another solo with Astaire that exists solely to prove that Astaire is Astaire, in case we hadn't noticed, while the actual movie, pushed off to side, politely waits for him to finish, so it can finish with startling abruptness.  This sounds negative, but damned if Belle of New York isn't awfully easy going down, a silky little confection that I'd happily call one of the most effortlessly-watchable musicals of its era.  The runtime helps (just 82 minutes long, making it one of the shortest musicals of its era).  But I only have real, legitimate objections to it once a plot any more complicated than "dance-based romantic comedy courtship ritual" finally flips on about twenty minutes before it ends, whereupon the movie at long last promises some manner of actually-interesting character convolution, which it allows to fizzle out almost immediately—pretty much, in fact, the instant that Vera-Ellen's music dubber Anita Ellis has finished singing about them.
That story, anyway, is theoretically based on Hugh Morton's 1897 musical play, adapted for the screen once already in 1919 as a silent film, which suggests a certain emphasis on narrative in Morton's libretto that isn't quite so apparent here.  Morton duly gets his credit (Gustave Kerker, who wrote the play's music, does not, but then they don't use his music, nor Morton's lyrics; Harry Warren and Johnny Mercer fill those respective functions here).  In practice, the 1952 film really only has use for Morton's central conceit: a young woman has been blessed, or cursed, with such great beauty that it keeps getting in the way of her calling as a turn-of-the-20th-century social reformer, but when a wealthy cad meets her and keeps following her around, her virtue really does (eventually) start to rub off on him.  Arthur Freed's '52 production was slated to be made nearly a decade earlier, with Astaire and Judy Garland.  Both of them disliked the story enough—Judy Garland and Fred Astaire thought a musical romantic comedy's story was too weak—that it only managed to get made once only one of them was still around to complain.  In the meantime, Charles Walters was tapped to direct, which helps explain why it's such breezy fun in spite of its flaws.  Perhaps the script changed between the mid-40s and 1952, too, perhaps not (either way, Astaire never liked it, though he praised Vera-Ellen's prodigious talent, as he should considering she was probably the most versatile dancer he ever worked with besides, maybe, Eleanor Powell), but what we've got here is not unrecognizably different from the play it's nominally based on.
Still, maybe it's telling that they don't even keep the original beauty's name: instead we meet Angela Bonfils (that's Vera-Ellen) as the opening title cards fade to a male chorus acclaiming her "the Belle of New York," a status hard to deny despite her gray, almost paramilitary attire, and the constant stream of moralistic exhortation that issues from her mouth.  The widow Lettie Hill (Marjorie Main), Angela's boss at her Salvation Army-like missionary organization, the Daughters of Right, is hardly thrilled about the gaggle of men who show up less to be redeemed from alcohol and gambling and girls and more to drool at Angela—though as her pal Elsie (Alice Pearce, contrasted with the hottie in a terrifically gracious and slightly discomfiting comic performance as the nottie) remarks, it's not Angela's fault she's hot.  Lettie has troubles closer to home anyway, namely her wastrel nephew Charles (Astaire), who is this very minute celebrating the latest in a long and seemingly-neverending series of bachelor's parties with his loyal inner circle of rowdy, sexy showgirls, to the chagrin of his best friend/parasite lawyer, Max (Keenan Wynn), as he prepares to marry a showgirl even sexier and rowdier than these babes—well, "prepares," that is, in the sense that it's heavily implied that he told her he'd marry her as the most expedient way to bang her, and that he has no intention of actually showing up to their wedding.  Which, to be sure, he does not. 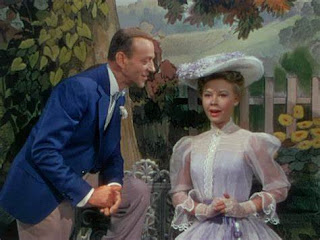 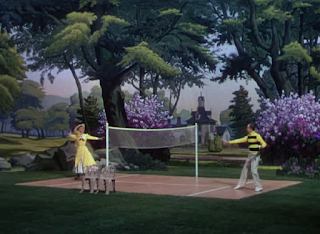 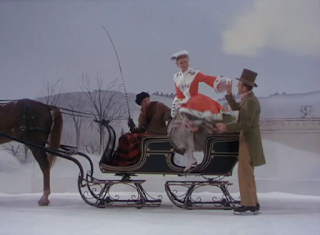 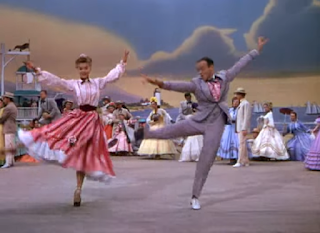 The thrust of it is probably obvious: Astaire and Vera-Ellen thrown into a series of vignettes based on the contemporary nostalgia for the general attitude of the Currier & Ives studio's landscape art, and, indeed, at least two very specific Currier & Ives prints.  There's a bit of an organizing principle otherwise, in that it tracks Charles and Angela's marriage-to-be through the seasons (oddly, it gets the order wrong), and the soundstages are tricked out with faker-than-fake backdrops; our couple, after all, have now entered a paper world where only their love is truly real.  But where it really gets nuts is where it decides Currier & Ives is insufficient, and therefore hybridizes the printmakers' aesthetic with the bombast of an MGM Technicolor musical operating at full-tilt.  As slavishly faithful as it can be to the subject of the prints, no tasteful Currier & Ives print is as garishly vibrant as the vision here.  (Thus, whoever's idea it was, there's no way they weren't aware of Mary Blair's animated precursor from Melody Time.)
It's utterly, utterly charming, spinning out from lazy badminton in a verdant glade with the duo dressed as, essentially, bumblebees, and into an elegant winter skating sequence on a frozen pond busy with big hoop skirts and petticoats of many colors, and onward into a blistering tap routine at the beach for summer.  The topper, while not exactly a new idea, is the use of extras as literal props, in the background during the skating sequence and then freezing in place, mid-dance, during the summer at the dock, in magical deference to the romantic dance at the center of this world.  It's just one of the most amazing things, executed for the most part very well, and it remains amazing even though one of the winter guys in the background fucks up, and keeps fucking up, like all through one of the long-take shots of the skaters.  The summer finale, on the other hand, is flawless, and if Walters and/or Alton don't use the camera to their best advantage as choreographers throughout "Currier & Ives" (it is, if I'm being honest, a little static), all the better to show off the sumptuous artifice of all those wonderful sets and costumes.
This is also the weakness of the worst dance sequence of the film, though, which happens to be the last, an Astaire solo shoehorned in by virtue of Charles moonlighting as a singing waiter.  This is "I Wanna Be a Dancin' Man," which exists today as viewable in two different takes and which gets a lot of attention for how it showcases Astaire's precision, which tends to overlook that it's narratively superfluous, which isn't a crime, and that it's boring, which is; it actually has some pretty decent editing, but they're quiet little changes in shot scales or buttons for emphasis, and the premise of this number is "Astaire is on a stage, in front of a blue screen, perhaps the blue screen we can still see pieces of in 'Seeing's Believing,' " which is a pretty pitiful way to end a movie that even at its clumsiest had never been less than feverishly visually ambitious.  (It's also not a great climactic dance number for a musical romance, I might add.)  But most of these last twenty minutes aren't used well.  It's kind of irrelevant: just for being a genial good time, I'd still probably give it a pass.  But for harboring one of the best things any MGM or MGM-style musical ever did at the height of that genre's powers—for even in the year of Singin' In the Rain and Lovely To Look At's blowout dance numbers, "Currier & Ives" is still a peer competitor—I can scarcely keep myself from getting stupid and just calling The Belle of New York "great."
Score: 8/10
Posted by Hunter Allen at 10:51 PM