What a disaster: All is fair on the fairground 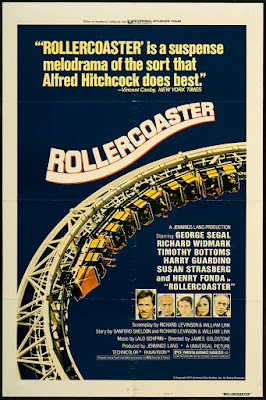 There are a few movies—say, Vanilla Sky—where just describing its genre constitutes a somewhat serious spoiler.  Likewise, there might be a comparable number of movies that saying what genre it isn't is a spoiler, and I wonder if this is actually a problem with the whole "disaster movie" label.  After all, when I say Airport is "only a disaster movie by tradition," I'm making an unmistakable implication about what does not happen in it, which leaves you with a fairly constrained set of alternatives about what does.  You've probably also figured out that I bring it up because today's subject, 1977's Rollercoaster, is also only a disaster movie by tradition—frankly, it might only be a disaster movie by pedigree, as it was produced for Universal by Airport sequel and Earthquake impresario Jennings Lang, and two of its writers were Richard Levinson and William Link, two of the authors of The Hindenburg.  Or maybe it's a disaster movie because it so aggressively courted the same audience of cinematic thrillseekers who'd turned up for disaster movies across the 70s, most notably by way of Lang's deployment of bone-shaking Sensurround sound during its initial theatrical run, one of only four movies to ever use the technology (the first of which was Earthquake in 1974), and the only one, period, that used on-set sound recording for the whole mix.  The system had some fairly obvious applicability to disaster movies generally, and very obvious applicability to a disaster movie about amusement parks.  I'm sure it was rad, though of course I have no idea.  (As for the other two Sensurround movies, you'll agree that while 1976's Midway makes sense, the final film to be released in Sensurround was the 1978 theatrical version of the pilot for TV's Battlestar Galactica, and so now I get to remember that as a weird footnote to the history of sound on film.)
Or maybe Rollercoaster is counted as a "disaster movie" just because it came out in a decade crawling with them.  It at least nominally fits some of the requirements for an Airport-style disaster flick, but when director James Goldstone repudiates the label, preferring "thriller" or "Hitchcockian suspense"—a not-uncommon deflection, as the term "disaster movie" always had somewhat hacky connotations—you have to admit it, he's 100% on the level, because that's exactly what he made.  I only belabor it, really, because it's the most salient weakness of Rollercoaster: that it isn't a disaster movie, and would be better if it were, but only because it's so good at being a I-don't-mind-invoking-his-name-either-Hitchcockian thriller that it whets a nasty appetite for viciousness which only a movie which committed a massacre could have satisfied.
Instead, the "disaster cinema" aspect of Rollercoaster is effectively contained entirely to its prologue, which starts out with our villain, a never-named young man (Timothy Bottoms, who is, indeed, credited as "the Young Man"), carefully surveilling the Ocean View Amusement Park in Los Angeles from afar.  (The "Los Angeles" part, of course, is the film's conceit to allow some of it to be shot in LA and for its hero to be soaked in a certain ineffable Californiana; the real Ocean View was a continent away, in Virginia.)  Later that day, he manages to plant a small bomb on the park's big coaster, and that night visits again to set it off by radio at the perfect moment for the resulting damage to spill a train's worth of passengers all over the park, in a genuinely frightful setpiece of rollercoaster cars coming apart and flying spectacularly through obstructions, with enough actual human stuntwork and actual human reaction shots to prime you for Goldstone and editors Edward Biery and Richard Sprague's illusion of several perfectly-cut insert shots of car-loads of dummies getting violently smooshed upon the pavement below.  With his mission accomplished, our young man vanishes into the night.
The "accident" at Ocean View, however, brings in the man who shall, improbably, prove himself the bomber's nemesis, Harry Calder of California Building Standards and Safety (George Segal, who passed away this March).  Calder has his own problems—we meet him as he's paged in the midst of some pretty loopy aversion therapy to help him quit smoking, and he's navigating a recent divorce and a new relationship, as well as joint custody of his kid—but he's struck by the inexplicability of what happened at Ocean View, as he'd inspected the coaster himself just three months earlier, and there are other elements of the structure's collapse that don't quite make sense, either.  But another "accident" occurs in Wonderworld (intended to be Kennywood here in Pittsburgh, but Kennywood declined the free advertising for obvious reasons; needless to say, Disney was right out), and by pure chance Calder sees the item in the paper.  Now he starts to suspect—and more than suspect, when he gets the runaround from the owners of the parks, whose secretaries' too-revealing excuses put them and the owners of three other amusements firms all in the same hotel in Chicago on the same day.  Calder wheedles a flight out of his boss (Henry Fonda, representing the "all-star" casting model in its failure mode, as he graces us with just two scenes, only one of which actually puts him in a room with Segal).  Calder confronts the owners, who admit they're being ransomed; but the bomber is there, too, and this puts Calder directly in his sights.  So while Calder's solved his mystery, he's also accidentally recruited himself into the bomber's plot as his delivery boy, and he's in no position to refuse when the FBI comes and drags him off to King's Dominion to make the money drop himself.  This doesn't go according to plan either, and now he's made the mad bomber actually mad.

So: you can see the absolute biggest way this isn't a disaster movie isn't that its villain fails to blow up enough stuff (though this is its biggest problem overall, and even with its preferred "bomb thriller" designation, there's still a rather noticeable paucity of bombs actually getting set off during this film's last hour and forty minutes).  But no, what I mean is how it is totally, exclusively focused on just one single protagonist, so much so that I didn't even bother listing the names of anybody else in the film, and only listed another actor besides Segal and Bottoms because Fonda's too big to overlook even if his role here could be.  (That said, it's at least worth mentioning that Richard Widmark plays the FBI's most prominent representative, a crabby agent named Hoyt, and that Rollercoaster was the silver screen debut of several notable newcomers: most famously, Helen Hunt plays Calder's tween daughter, but Body Double's Craig Wasson and Steve Guttenberg in an awkwardly oversized suit likewise appear in a couple of semi-memorable featured extra roles, because while it's not a disaster movie, we do get enough random bystanders for some amount of disaster movie-like texture.)
Still, it's a movie devoted to the unlikeliest of heroes, a civil servant who, more-or-less just by doing his job correctly and diligently, falls ass-backward into a supercriminal's plot.  There are many things to love about Rollercoaster in spite of its flaws, but Calder might be the easiest.  He's simply a great little character, an enjoyably wry and irritable mid-career professional who's routinely the smartest man in any room, with a lot of shading that draws out more dimensions than you'd necessarily expect, from a resentment toward an ex-wife that he has the decency to have a sense of self-deprecating humor about, to his constant fiending for nicotine, even to his apparent toleration of a certain level of corruption from his superiors because he's basically too pragmatic to go whistleblower (I rather like the scene where he gets his plane tickets to Chicago paid for by his department because he blackmails his boss, which is so office-politics petty it rings completely true).  There's something fascinating, too (even a little gratifyingly Great Society), about a thriller that pins its hopes of preventing catastrophe on a paper-pushing bureaucrat rather than on a first responder or somebody with a personal stake in the matter, and Segal's performance offers an edge of smugness and abrasiveness to our put-upon not-quite-an-everyman that fully brings out the idiosyncrasy of a character archetype that, as far as I know, exists solely in this movie, the safety inspector on the edge who doesn't play by the rules.