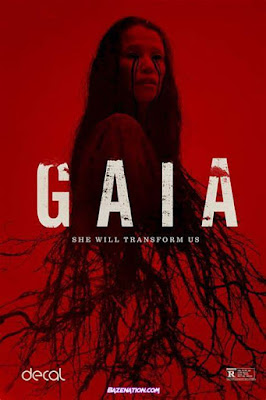 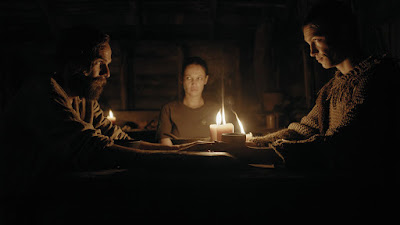 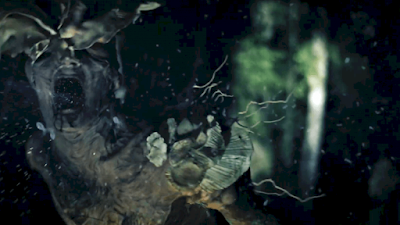 Which could be perfectly cool—it's hardly a sin for a horror film to lack predictability—except what it means in practice is a series of scenes that feel like they're in continual reset as the remaining more-than-an-hour demands to be filled, and very few of these resets make much sense; the only worthwhile one is the one that subverts the film's implication that Barend intends to make Gabi his horny teen son's bride, and the rest feel like Gabi starts fresh as a new character each day, who does not necessarily always seem to remember what happened the day before, and not in an ambiguous way but more like Kapp wanted tension, did not want a rape plot, and was kind of at a loss for how to achieve both aims, so he threw in the opposite of a rape plot even though it feels like it came out of nowhere.  It tries a whole lot of different modes—Night of the Living Dead-style siege horror, religious cult horror (that edges up against full-on Bible allegory), Evil Dead-style gonzo gore action horror, psychedelic horror (duh), and body horror, not to mention what amounts to a caveman romance—but not a single one of them takes, and it feels like Gaia just has to keep grasping at ideas to keep itself going at all, and the only two things that work throughout are basically just a pair of brute facts, the first being that the South African forest has an unfamiliar complexion to an American, and the second being that Rockman either doesn't wear makeup for most of the movie because of course her character wouldn't (and I genuinely want to praise this) or else is wearing so very little it seems that way.  (For that matter, neither is van Dyk, and it adds verisimilitude to a situation that needs it.)  Still, those are some pretty thin reeds; at 96 minutes with credits, Gaia might be right-sized for a movie that is, again, about mushroom people, but still feels longer.
Ultimately, the main goal winds up to return Stefan to civilization (the secondary goal is getting him past Barend while Nel chews scenery quoting the Unabomber manifesto), and these three figures remain inordinately flat and uncompelling thanks to fairly vaguely-expressed motivations, and the fact that the supernatural (or, I suppose, science fictional) danger remains distant and unthreatening.  The mushroom monsters are pretty lackadaisical: they look reasonably neat, or at least reasonably distinct, but for whatever reason the fungus among us eats its hosts' eyes first, leading to a smattering of theoretically-nerve-wracking Quiet Place-like "don't make a sound" sequences that, unfortunately, come off more like three experienced outdoorspeople knifing blind guys who've drunkenly wandered into the wrong hut.  (It's also not remotely clear where these hosts are coming from.)  Gaia probably didn't have the budget for more than what it does, as it was made for a reported sum of $126,000 (so, you know, congratulations on making any functional film whatsoever).  Oddly, when it tries its hand at psychedelia, that budget is even more keenly felt, though money's not the real problem.  It's that other than some decent matchcutting coordinated with a floaty camera, there's nothing like the Russel-esque visual imagination (though in this instance, maybe Malickian would be more appropriate) needed to pull the desired feeling of grandeur out of Gabi's magical mushroom tour.
The body horror is keyed even lower; it has one good gore shock, I'll give it that (poor Winston! and obviously the other big forebear is that episode of Hannibal about the guy who makes fungus sculptures out of corpses).  But Rockman plays mushrooms growing out of her skin overnight more as an irritation than as something to get terrified about, and it seems to bother her so minimally that plucking hairs might hurt more than pulling the fruiting bodies out of her skin, whilst the mycelial network growing inside her flesh doesn't seem to cause any pain at all.  On the other hand, I'm frankly not entirely convinced Kapp or Bouwer know how fungi work, or even what they are: the film is fond of computer generated growth spurts for the fruiting bodies that present as fully-developed within seconds (even on its chosen level of unease with the natural world's decomposers, there is absolutely none of the creepy-crawliness you'd get just from watching actual time-lapse video of gross fungus on a forest floor), and any given mushroom man seems to be comprised of a half-dozen species; that's acceptable license up to the point that, in the finale, I'm pretty sure one of those species is just a fucking fern.  It is, anyhow, green.  It has a nice, potentially-apocalyptic denouement still left to get to, but that sloppiness sums up Gaia pretty well, and it's a shame that such an unexplored facet of horror as that presented by a godlike, Lovecraftian fungus ends up so underwhelming.  Gaia rips things off wholesale and without verve, and it barely has the energy to pursue its own, unique ideas, either.
Score: 5/10
Posted by Hunter Allen at 1:04 AM