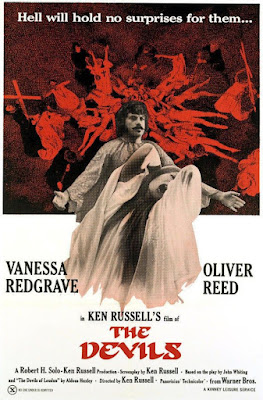 THE DEVILS
1971
Written and directed by Ken Russell (based on the books The Devils of Loudon by Aldous Huxley and The Devils by John Whiting)
Spoilers: moderate

Earlier this year, Warner Bros. released Space Jam: A New Legacy, a gross cross-branding exercise that would've been fairly lame even if it had stuck to its essential format and been presented as a two-minute ad spot for HBOMax, and in the format it did take, that of a nearly-two-hour motion picture, it became almost literally unwatchable.  (It is, in fact, the same runtime as the movie now being reviewed.)  Anyway, if you did somehow finish Space Jam 2, and sort-of kind-of paid attention during the basketball game that constitutes its final forty-five minutes, you might have noticed that within the vibrating throng of Warners properties in the background one of the cheap cosplayers they hired was dressed as Sister Jeanne des Anges, abbess of the Ursuline convent that is the center of Ken Russell's 1971 film, The Devils.  I like to think somebody did that as a joke; it's even funnier to think that the executives assumed they were dressing as the monster from the Conjuring spin-off The Nun.  It's not that the crowd scene is representative of exclusively family-friendly entertainment otherwise—I'm not laughing at the idea, "ha ha, Ken Russell's infamous and censored The Devils is sharing a screen with the Iron Giant in a kid's movie," because I didn't think it was funny to put the Droogs in there, and that was 100% authorized and on purpose, because A Clockwork Orange is evidently "a brand," God help us—but instead I'm laughing bitterly at the idea that somebody working for Warners used that piece of shit to highlight that Warners, going on fifty years now, has failed to make The Devils available for home viewing in America.  Not that they have not had their reasons.
The Devils was met in 1971 with one of the nastiest backlashes a movie's ever faced.  It was slightly cut for British distribution, and, surprisingly (given the British), faced even more scrutiny in America, where several minutes were removed—and this even with Warners knowing more-or-less what they were getting into, considering that Russell had the completed screenplay in hand when he came to them, and United Artists had already recoiled in horror at it.  These cuts would not have been so much, I believe, to have justified Russell's complaints of "incomprehensibility" ("comprehensibility" could not have been Russell's watchword when making it), but they were fairly severe in that they did remove key imagery.  Inevitably, when it was released, it was brigaded by Catholics throughout the English-speaking territories; it got an X rating in both Britain and America, and one can't accuse the MPAA of unfairness on this one.  The film also made a reasonably spectacular amount of money, predominantly in Britain, perhaps precisely because of the scandal surrounding it.  And then it left theaters, and at some point around the year 2000 it must've gotten a DVD release in Europe—and these days you can only watch it pirated, meaning that it's about as abandoned as a successful motion picture has ever been.

It prompts one to ask why; seeing it does present a partial answer, because even today, The Devils still shocks.  But that abandonment, I was saying, may have had something to do with the power of critics in the early 1970s, and if that's the case, maybe it's a good thing the profession's tastemaking power's collapsed, given the dumbshit ways they wielded it when they still had it.  The Devils, anyway, occasioned one of the worst Roger Ebert reviews I've ever read (the only one that's worse is only worse in an ethical sense, and that's the one for Halloween III where it becomes reasonably clear he either walked out or fell asleep, without disclosing it).  Ebert's review, anyway, is distinct from the trad-Cath fascist protests against Benedetta this last week mainly in the sense that Ebert had the decency to be amusing, though in penning a review comprising wall-to-wall sarcastic praise for its brave truth-telling (then appending a zero star rating to it), he accomplishes about the same thing, and it's not necessarily good that he did it more effectively.  (My favorite part, however, is when he complains about standing in line in the cold, like it's Ken Russell's fault he chose to live in Chicago.)  It's not the biggest surprise that early Ebert could sometimes (and seemingly almost arbitrarily) become a tiresome moralist, but he was joined by a large swathe of his peers (Pauline Kael, too, which does surprise me), and while they couldn't kill a movie as appealing to the prurient interest as The Devils admittedly is (like I said, they probably helped), I don't much doubt they did their part to bury it.
Now, I said it still shocks today, like we're so jaded.  But in a formal sense, The Devils might be more shocking today than it was in 1971, because I don't know if we've ever quite managed to replace Ken Russell with an equally gonzo-freak successor; I at least can't name a working filmmaker who genuinely resembles Russell, but then, there never was.  Russell had two great interests (he often mixed them, but let's keep it simple): religion and artistic performance, especially music.  No points for guessing The Devils, something of the ur-text of nunsploitation cinema and probably its masterpiece, is leveled squarely against the former.  Even so, it begins with the latter, in the court of an enormously gay Louis XIII (Graham Armitage), who's presently starring in a musical drag show about Venus emerging from the waters for the benefit of Cardinal Richelieu (Christopher Logue).  This is also, after all, a movie about politics, as the crushing of a haven for Protestants becomes a priority for Richelieu in his bid to centralize the power of the state.  Richelieu couldn't care less about the drag show, let alone its mythological foreshadowing of plot and theme, or the way that Venus's origins in a violent emasculation wind up reflected in the film's final shots; but he cares an awful lot about Protestants.

It's humanist as much as Christian (not for nothing is the film's only reasonable and ultimately most holy figure the dissolute cad), but it's not not Christian; in any case, it's surprisingly affecting, given where we started.  The film's biggest problem, then, could be that it's difficult to figure out how the sincerity of its final act connects to a first act that involved a man using a prop crocodile as a bludgeon.  (Though its objectively-biggest problem—and the one that bothers me the most—is that it does not adequately ground Grandier's transformation from king sex of Loudon to the committed husband who wants to honor Paul's injunction to marry, even if he does so highly un-Catholicly.)  But I won't say it doesn't connect the brutish goofiness of that first (and second) act to the sublimity of the third: it anchors it in the one major performance that cuts against the grain of the rest, Reed's smug, somewhat assholish, but always self-deprecating evocation of offended dignity, which becomes steelier and more confident as his persecution continues.  Eventually, he's relieved even of his hair, not just his fancy mustache, but his eyebrows; he becomes a contemptuous thumb who will not remove himself from the Catholic Church's eye.  Reed offers something like an immoveable center for the storm swirling around him.  When everyone else is a clown, The Devils was in need of somebody like that.  There is, I believe, only one scene that even feels like humans are in it otherwise; surprisingly, it's a Redgrave scene, when Jeanne mocks Madeleine for asking to join the Ursuline order out of genuine spiritual desire, when what the nunnery really is is just a hole in the ground for unwanted women.
But I don't mean the lack of human-scaled acting as a criticism.  I really don't have many criticisms of the film: its shrill tenor and the extreme visuals are not just its selling points as geek show spectacle—though you damn well get your money's worth on that count—it is, in fact, the reason it works.  In its violent, often-comic absurdism, it wants to tear away one of the masks people wear—in this case religion—in hopes of finding the pulsating glob of animal horniness underneath.  It's a truly fearless movie in this regard (and not in the facile way people describe such movies today; I frankly wonder if it invited real danger).  But I don't know if it didn't find something else down there too.
Score: 10/10
Posted by Hunter Allen at 10:51 PM