Seems like I should be getting somewhere, somehow I'm neither here nor there 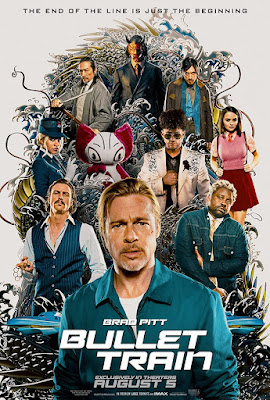 While I've unfortunately fallen more and more into a mode of reviewing that's childishly belligerent—"am I out of touch? no, it's you morons who are wrong"—Bullet Train offers a chance to correct that a little, because I do get why people didn't like it: it's founded upon a screenplay that's about half as clever and witty as it thinks it is, and while I think it makes a good go at being a turn-of-the-2000s throwback (I might later say something like, "it's the most successful turn-of-the-2000s movie since the turn of the 2000s"), the particular styles it's throwing back to were abandoned for a reason, only cool for about a minute back at the change of the millennium, and difficult to resurrect unironically now, in no small part because they were kind of ironic in the first place even when they were plied with x-treme sincerity.  And I don't know what to say, except this is all what I liked about it.
There are other objections I agree with more, and I really can't argue with the proposition that the movie is somewhere between ten and thirty minutes too long, insofar as at a certain point about halfway through its third act (to the extent its realtime screenplay has meaningful "acts," which I don't mean as a criticism) its action opens up and its scale expands to the point that it has to have been a disastrous studio note or something, because it's completely dissonant with what came before (and pretty dumb on its merits).  There's a third set of objections that I'm agnostic about, coming from the fanbase that its maker David Leitch has developed over the last decade, who are annoyed that the co-director of John Wick and director of Atomic Blonde, the latter still his best movie, has seen it more fit to remake in various forms Deadpool 2, his most successful movie, since getting his name onto the A-list.  I may, indeed, be less than just agnostic about this, for one thing because Bullet Train represents something like a hybrid of his previous career peaks (like Deadpool 2, it's foremost a comedy we're dealing with, but, like Atomic Blonde, it's also a twisty thriller plot that takes more pleasure in the fact of being twisty than it does in untangling itself in a clear manner).  It's also because, in terms of being an action-comedy, it's a better action-comedy than Deadpool 2, in every instance able to better rely on well-executed visual and dialogue gags and offbeat character dynamics, rather than banking almost everything on Ryan Reynolds's desperate patter.  I'd better change tacks, because if I have to acknowledge that people actually do find Deadpool 2 funnier than Bullet Train it'll knock me right back into childish belligerence and my usual thrashing, toxic manner.

Likewise attempting to rid himself of negative vibes is our hero (Brad Pitt), an operator presently in Japan, and working under the codename "Ladybug," a sobriquet given to him, he reckons, because of the pretty beetle's association with luck in Japanese culture.  (I don't know if this is truer in Japan than in any other culture—cute, harmless, and useful, ladybugs are widely-liked—but the movie definitely believes it is.)  Ladybug has of late been worn down by what he perceives to be a long string of bad luck, and is on the assassin equivalent of reduced workload at the recommendation of his therapist, and so has been given the simplest mission that the voice in his ear, his handler Maria (Sandra Bullock), could find for him, a nonviolent job where he's tasked solely with stealing a briefcase from the baggage aboard a train on the Tokaido high speed rail line between Tokyo and Kyoto.
As this briefcase belongs to two other assassins, siblings "Tangerine" (Aaron Taylor-Johnson) and "Lemon" (Brian Tyree Henry), it's not as simple as Ladybug had hoped.  Things become more convoluted still given that they're currently ferrying the son of the infamous yakuza boss, the so-called "White Death," back from a successful rescue, their briefcase being full of the ransom money which they also retrieved.  This is somehow related to Yuichi Kimura (Andrew Koji), a yakuza underling lured aboard the train in order to get revenge for his son, recently the victim of a murder attempt, and this is somehow related to a young woman in babydoll attire (Joey King), though it's initially quite unclear if any of these things are also related to the arrival of the Wolf (Benito A. Martínez Ocasio), an assassin with a profound grudge against Ladybug for past sins, or the Hornet (Zazie Beetz), a poisoner.  Furthermore, amongst Ladybug's antagonists there numbers, quite hilariously, a snake; and while I don't think he ever reaches his full potential given that he genuinely is not any part of this plot—more's the pity!—there's also a testy conductor (Masi Oka), who scowls at Ladybug a lot in funny ways because, in a bit of that bad luck he was talking about, he lost his ticket.
That's kind of a lot, but being "a lot" is the point: the way these characters careen off one another, almost invariably with bloodshed, all introduced in Leitch's pastiche of turn-of-the-2000s style with a showy freeze-frame and a Mountain Dew font in giant letters that announces their nommes de guerre, albeit sometimes only for them to get murdered by one of the others by the end of the same scene.  And this is all, to be blunt about it, incredibly fun.
But since I've indicated the movie has its salient negatives, we could start with that—the negative is honestly easier to describe, and I earnestly wonder sometimes if that could be a factor for bad reviews of movies like this, given that the reviews have to be dashed off in an hour, rather than written in the ripeness of thought and time (oh, there I go, being toxic again)—and so let's visit first with that conductor who vanishes from the movie, since he's kind of a symbol for one thing maybe not entirely wrong with Bullet Train, but certainly very weird about Bullet Train, in that it does have a profoundly empty quality to it.  I don't mean that, necessarily, in terms of emotion or psychology (for while by no means is it more than puddle-deep, I don't really care).  I mean this in purely aesthetic terms: its vision of a train on the Tokaido high speed rail line between Tokyo and Kyoto is exclusively one of an action playset populated almost exclusively by Leitch's action figures.  There is, occasionally, an interaction with a civilian; there are a few jokes about and some lip-service occasionally paid to the idea that our protagonists' business must be conducted quietly; and there are sometimes extras alongside them on the train.  But this isn't very strongly insisted-on, and it becomes even less insisted-on as the story proceeds and finally explicitly dispensed with altogether.  Even to the extent that the citizenry of Japan actually exist in Leitch's universe, which isn't much, they are NPCs utterly disinterested in the havoc around them.  I could maybe respect this more if it ever seemed like it was intended to resemble Japan's own popular genre of train molester porn, only now with murders being studiously ignored rather than gropings, but it's definitely not an overt joke or anything.