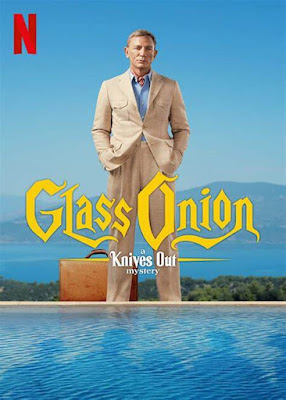 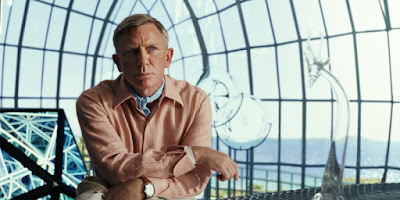 If 2019's Knives Out worked better for you than it did for me, and it probably did, I suppose it's possible that its sequel, Glass Onion, might also work better for you, because it is, fundamentally, the exact same damn movie, reskinned: its "full" title is Glass Onion: A Knives Out Mystery, which is a name not reflected in its onscreen, tequila-bottle font, "real" title card—it reads, simply, Glass Onion—and maybe that's even a tell, in a protesting-too-much kind of way.  I'll go ahead and say I like it slightly less than its predecessor, which turns out to be one of this mystery's meaner surprises, because it doesn't start out declaring that it will be a retread of Knives Out—that is, retreading its plot in addition to its themes (for of course retreading Knives Out's vague anti-capitalist themes was always somewhat baked-in here, as "anti-capitalist themes" are a brand to manage just like everything else)—let alone does it declare it'll be a retread to diminished returns.  For all of Knives Out's very-obvious yet widely-ignored weaknesses, Glass Onion genuinely does expend a significant amount of effort correcting them, and for the whole of a long and strong first act, I was extremely grateful for this.
The most basic of Knives Out's problems does get fixed: Glass Onion is a story for which one may reasonably assert that this mystery franchise's super-detective, Benoit Blanc (Daniel Craig), is actually the protagonist, or at least a deuteragonist, which is an agreeable shift from Knives Out which made the unique and flummoxing decision to introduce us to this super-detective by affixing him to a thriller plot where he is very clearly the third (arguably fourth) most important character, where his skills don't really matter for the vast majority of the runtime, and which (with minor changes) could have been executed perfectly cleanly without his presence at all.  It does not really fix that he's not the world's most interesting super-detective, but it's at least conceivable that the most interesting thing about him is no longer Craig's vicious rendition of my American dialect, which Craig has managed over the course of several roles over the past few years to craft into something that at last finally sounds slightly less like a 50-something British man doing a hate-fueled impression of Foghorn Leghorn.  So that's nice.  (You know what?  At least I say "the hospital.")
Benoit Blanc, then, starts out his story finding himself on a very exclusive list.  It's a list which we run through with thoroughness but also a salutary, splitscreened efficiency, as our various principals each receive delivery of a curious puzzle box, and five of them—Lionel Touissant, a highly-placed Silicon Valley engineer (Leslie Odom Jr.), Claire Debella, the governor of Connecticut presently running for Senate (Kathryn Hahn), Birdie Jay, an ex-model turned fashion designer (Kate Hudson), Duke Cody, a Twitch-based men's rights activist (Dave Bautista), and Whiskey, Cody's girlfriend (Madelyn Cline)—all join forces over Zoom to solve said puzzle.  At the end they find an invitation to spend a weekend with the central hub of their little wheel, billionaire wunderkind techbro Miles Bron (Edward Norton).  (Peg (Jessica Henwick) is also on hand as Jay's assistant, but she doesn't matter.)  Meanwhile, yet another box arrives at the door of Andi Brand (Janelle Monáe), which is very curious because she isn't a part of this circle anymore, having recently been on the losing end of a lawsuit, forced out of the company she helped found by Bron's vile machinations; and instead of solving the puzzle conventionally, she more cleverly just bashes it in with a hammer.  Blanc has received his own similar box—solving it more conventionally but, by his account, almost as easily as Brand did—but even more curiously, he wasn't supposed to, and when he arrives Bron takes him aside to ask him what he's even doing here, because he didn't invite him.  Nevertheless, he's happy enough to have Blanc's company, and it's explicable enough (for now), as one of his pals cheating, for Bron has planned the weekend as a riveting murder mystery party—he'll play the "corpse"—though Blanc has solved this before he's even announced the details of his scenario.  Before we wonder if the whole weekend's down the drain, however, somebody dies for real.  And then somebody else.  Good thing there's a super-detective already on hand.
This long first act is, in fact, kind of good, and it's good in ways Knives Out wasn't, and didn't really want to be—including just "being a Goddamn murder mystery."  (I forget when exactly it was revealed there was no initial homicide in Knives Out, but I recall it being pretty early.)  Writer-director Rian Johnson—a filmmaker I'd like to like, but whose best film remains a seventeen year old one-note joke about teens doing hard-boiled noir dialogue across the span of a feature that, like literally every one of his movies, runs about twenty minutes too long—has still not evolved his understanding of satire beyond Knives Out's wearisome concept of "a cast of caricatured assholes representing sociological foibles who get on your nerves, which is supposed to be funny."  But he has at least in this instance managed to create more than one caricature with more than one foible, rather than an entire cast of just iterations of one asshole, whose satirical value was being more secretly racist or less secretly racist, as determined by Johnson's adjustment of the slider on his screenplay generator's character creation page.  Despite (sometimes because of!) their flatness, these are fiercely individuated characters.  This isn't an unalloyed good—it doesn't really make sense how these people could be such close associates, and when their web of relationships actually does receive an explanation beyond the acceptable dodge, "they are all douchebag elites," it makes less sense—but it is far less tedious in the watching, and that's what really matters.  Egads: some—against Johnson's will, I'm sure—even accidentally become human beings. 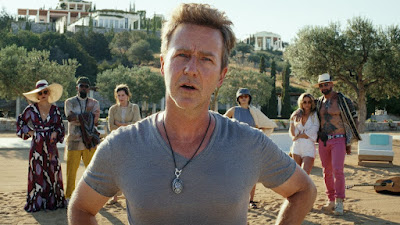