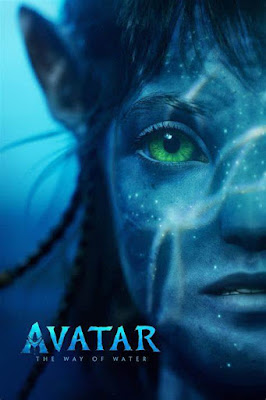 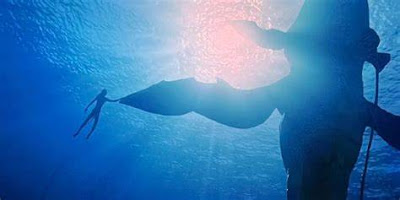 It's been thirteen years now since James Cameron rocked our world with a fantasy of guiltless existence captured on the moon Pandora, and, light lag being what it is, thirteen years is inevitably how long it took for a follow-up.  But I can't quite shake the nagging feeling that whatever Cameron intended, Avatar itself never wanted any follow-up, because its fantasy was already complete.  Even the strongest attempt to continue its story—which Avatar: The Way of Water at least gets pretty close to being—would reopen the wound it had once dreamed closed.  Logically, that checks out.  I mean, logically, humans return to Pandora with full intention to commit genocide, rather than attempting to do so by way of a tantrum and in something close to a fair fight, at which point it's game over for any folks still at the bottom of a gravity well when their opponents are at the top.
It's a beckoning fantasy, though—albeit one prone to being mischaracterized, all the more in 2022 than in 2009, as Way of Water arrives upon a culture that has, they'll tell you, "moved on," though what they mean is a culture that has (ironically, given how little anybody cares about anything anymore besides fantasy intellectual properties) become unremittingly hostile to allegory and dream as modes of artistic expression, so that while I'll easily concede one of the things going on with Avatar was, putting it glibly, some white dude's bizarre transracial fantasy about becoming a Space Indian, it wasn't the thing.  Not very surprisingly, the Canadian used North American First Nations as a starting point, but it was always more atavistic than that, as honestly might make it even less sensitive, but this is something that should be apparent from the basic fact that for all that the Na'vi stand in metaphorically for the indigene mistreated by every earthly conquest, I'm at a loss to name even one indigenous culture, or even any Neolithic one, that rejects, in turn, agriculture and metallurgy and the technology to build, like, roofs over their fucking heads.  (They have houses now in Way of Water, which I'm not sure I like.  But the Na'vi barely had art in the first film, and have only slightly more now.)  It's a movie where I'm fairly sure they only still have bows and arrows because bows and arrows are cool, and you gotta kill space marines with something; it's a movie where animal domestication happens without any of the technology or technique humans developed to tame non-human life, but instead happens with animals who have co-evolved to be tamed, as a fully natural part of their life cycle, so that they practically want to be dominated, pretty much precisely in the sexual sense that this implies, given that the same Na'vi organs are involved in both acts.  Look, it was all very visionary, and I love it.  I fancy I've thought enough about the foundations of its appeal to, you know, grok it in its fullness.  And I still don't know how enough other people loved this extravagantly weird shit to make almost three billion dollars. 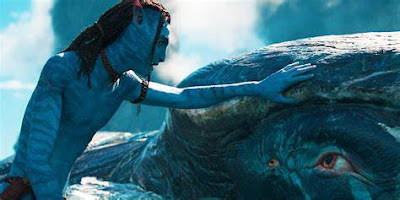 Unless, perhaps, they responded to that most human of all fantasies, about giving up being human, about dispensing with every human weakness and every human sin such as are borne by our hero Jake Sully (Sam Worthington), and about having trippy telepathic furry sex such as Jake has with his impossible girlfriend Neytiri (Zoe Saldaña), and about keeping just enough human individuality to still experience the awe of living in a world where a literal worldmind connects you in literal harmony with nature, the kind that humans like to pretend exists, while every human society has only ever done what all successful life forms on Earth do, because on Earth there never was any God to tell any of us, from the mightiest civilization down to the humblest cyanobacteria, to stop.  But, on Pandora, there is.
Profound and practically unusable, which is what makes it such good fantasy; but it's not necessarily fantasy made better by turning Jake and the Na'vi's mythic victory against the Sky People into never-ending pain, nor by turning Jake and Neytiri's off-putting furry pornography into Jake and Neytiri's off-putting domestic sitcom, nor, really, by complicating it in any way. Way of Water diminishes Avatar, just by existing.
Not that that's some unforgiveable crime.  If you need a justification for returning to the world of Pandora, that justification is sitting right there in your local theater being amazing (I have every hope it has Avatar's legs, too, because the damage is already done, and if we're going to have one sequel we might as well have all four, for it surely beats anything they've done with fucking Star Wars in thirty-nine years).  It is, it's true, not as novel an experience as Avatar was back in 2009, when it revolutionized mocap animation and resurrected 3-D, confirming the wildest possibilities of CGI if you were willing to put the time in, as well as legitimating 3-D as a potentially profound aesthetic tool if you used it well.  But one can say with little fear of contradiction that this is the best CGI or 3-D since 2009.  Now, I've long-since firmly committed to the opinion that Gravity is the better 3-D experience, but that doesn't necessarily mean it was better at using 3-D; and Way of Water handily surpasses its predecessor on both counts, particularly in the underwater sequences where the 3-D gets that look of refracted, dimmed light juuuust right.  The mo-cap CGI, meanwhile—the "performance capture," to have it Cameron's way for one sentence—somehow feels almost as much of a quantum leap as the first film's, which isn't objectively so, but after thirteen years of studios too often not putting the time in, Way of Water reaffirms what CGI modeling and rendering should always be like in 2022. 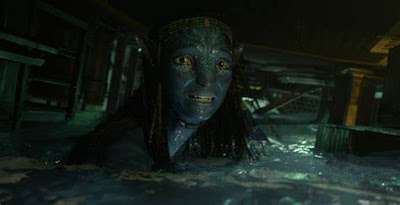 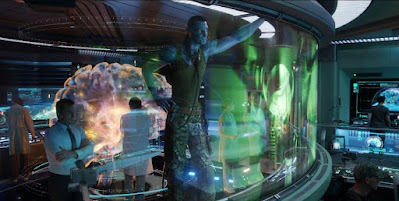 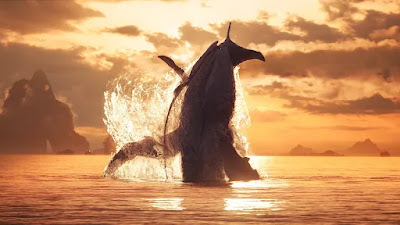 It works completely, despite its very patent weaknesses, and though we (theoretically) go to Cameron for action over everything else, and the final hour of this film is just a superb work of classical action filmmaking, in which Cameron turns his eye towards fixing a new 19th century injustice (that in this case actually was almost entirely fixed), it may actually work best of all in that middle hour, which I've scarcely even mentioned, but which is the heart of it.  It's what makes Way of Water almost unique in the annals of blockbuster cinema, and accordingly almost inutterably distinct in the context of contemporary blockbuster cinema, which has gotten so lore-obsessed and talking-in-rooms it barely remembers it's supposed to be sensation anymore.
There are still character dynamics throughout this hour, principally between Lo'ak and his 80s movie bully counterparts amongst the Metkayina, but it almost ceases to be narrative cinema the way it's currently understood, happy—ecstatic—to become a quasi-documentary teen movie about, well, the way of water, devoting astonishingly long stretches of screentime to just existing in the shallows and not-so-shallows of the reef, delighting us with the new sights and sounds of this corner of Pandora, from the my-heart-actually-skipped unveiling of the Metkayina's flying seahorse things (in the process, somehow transforming the dumbest-seeming sci-fi creature I've ever seen into something incredibly bad-ass and cool), to the obligatory glow-in-the-dark mysticism, to some of the awesomest, most specific dorkiness I've ever had the pleasure of witnessing in any movie, an idea only a creator of a certain age and a very, very particular ideological bent could even come up with as a joke, and this is no joke, but a pure slice of somebody's soul, taking the form of wondrous, super-intelligent space whales, eventually placed in the dire straits of being whaled by ravenous humans but unable to fight back because they're all such pacifists they would rather die than commit the slightest act of violence even in self-defense, and I want to italicize the last thirty fucking words to emphasize how eco-hippie splendid that is to me.
It seems absurd, but one of my favorite scenes in this movie, which is pretty much all "favorite scenes" anyway, is a bunch of cartoon alien humanoids having sign-language conversations with cartoon alien whales about, like, their day, and how things have been going.  As exciting as it can be, I'm not stoked about further atrocities wrought upon the Na'vi and their world, not really.  But this?  I can get stoked about this.
Score: fuck it, 10/10, the main thing holding it back was HFR shenanigans
Posted by Hunter Allen at 10:56 PM