I spit on your grave, and the wind blew it back in my face 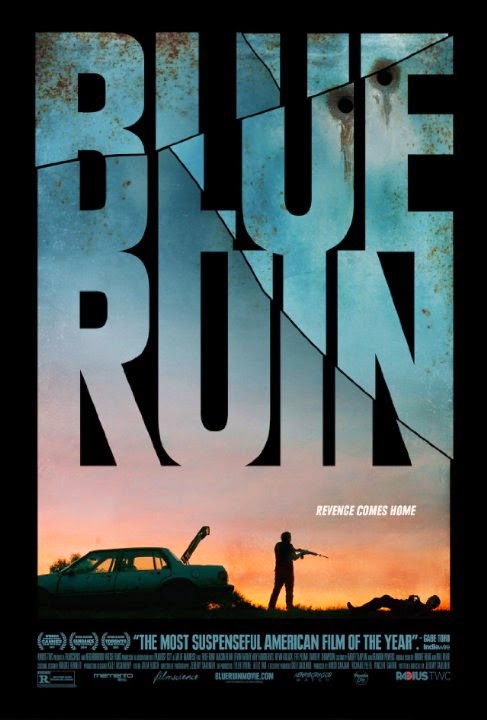 2014
Written and directed by Jeremy Saulnier
With Macon Blair (Dwight)

Blue Ruin is an especially simple little movie, with plainspoken intentions, though it is not the least bit worse for it.  It's about a cycle of violence that began when one man killed another man, along with his wife, leaving their two children orphans, a girl and a boy.  The boy grew up with revenge in his heart.  The man the orphaned boy blames for his parents' death went to prison.  The orphan went to ground, becoming an aimless drifter, waiting for the day the man got out.  On that day, the orphan was at the prison gate, ready to kill.  He was also ready to die.

At least one of those things doesn't happen, of course, or it would have been a very short movie.  Decency prevents me from describing what does happen, but the end result, which provides us a feature length look at the terrible loogie of vengeance that just won't quite snap, is a family feud that won't end until one family or the other is annihilated.  (I suppose it is impossible to continue to review the film without revealing that our antihero does make it through the first act, for this is not Psycho.)

The interesting thing about Blue Ruin is certainly not its well-worn themes, though they are as well-enunciated as one imagines they ever could be, but in how it pursues them.  The orphan may have spent his years dreaming of justice, but he has made next to no preparations.  He is armed only with a small knife; his attempts to acquire a gun do not go terribly well; his ambuscade is improvised without a great deal of subtlety; the car he uses to get himself into place for it is almost non-functional; and it is not clear that he has ever done a single push-up in his whole life.  We never learn Dwight's last name, but we can be reasonably sure that it is not "Wayne."

The thrills of Blue Ruin are driven by an avenger who could never headline an action franchise.  Dwight is quite inexperienced, of ordinary physical and perhaps less-than-ordinary psychological resilience.  He's also careless and maybe even a little stupid.  He tries to puncture a tire with a knife, and slices his own hand open; he tries to perform some truly badass self-surgery after sustaining an arrow wound, and we smash cut to an emergency room.  It's like Die Hard, taken down to the lowest level you could possibly take it, and still have it properly function.  Ruin's the movie that realizes that most people have never hunted humans, and doing it for the first time involves a truly dangerous learning curve.  It's the neorealist roaring rampage of revenge.

Usually I say that like it's a bad thing, and that's because usually it is.

We can begin with Ruin's blank protagonist, given a shambling semblance of life by Macon Blair's charisma-light performance. He starts with an indigent's beard, but eventually shaves it, revealing himself as something akin to a dead-souled Matthew Broderick.  We're with Dwight in nearly every shot: thus Ruin is a nearly silent film for its first twenty minutes, as we follow Dwight's lonely, single-minded pursuit.

Blair's hollowness is nonetheless specific, and it's compelling.  Dwight really is little more than the sum of an ego-destroying pain, and his pitiable turn is never less than wholly sympathetic, even when he puts what remains of his family in danger largely because even though he's had a decade he just hasn't thought any of this through.  (It's good, too, that Blair's compelling, since I counted only four real conversations in the whole film, and every other actor is essentially turning in a cameo.)

Jeremy Saulnier is keenly aware of the line his script walks, between a potentially toxic combination of dull realism and dour moralism, on one hand, and the audience's need (and I surmise his own) for bloody pop-entertainment on the other.  Bullet holes let us know that Dwight's been living in the car his parents were killed in, after all, and symbolism like that doesn't come along every day.

But Saulnier never makes a misstep in tone—and does this by, quite wisely, erring on the side of fun.  I find myself (almost) wishing I'd bothered to see Out of the Furnace, last year's presumptively miserablist piece of revenge-tinged hicksploitation that swathed itself in blue-and-gray and called upon Christian Bale to be intense-and-brooding; I suspect the contrast would be extraordinary.

Perhaps its narrative's very least important moment—it could be left out and affect the plot not at all—is also the one that typifies Blue Ruin the most of any of them.  It's the most laugh-out-loud funny thing in a film that I've suggested brushes up often against the comedy of errors, coming when Dwight has invaded his enemies' home.  He finds them absent, so he attempts to leave what will prove, ultimately, to be a blood-curdling message on their answering machine—and meanwhile, the audience bears in mind that he's calling on a corpse's cellphone.  Of course, on his first attempt, he's standing right next to the machine and feedback ruins the message, so he has to try again outside.

At this point, we should pause and be thankful that, though there is a certain satirical comment upon the RRR genre, Ruin is itself, and that it is not what it could have been, and easily might have been: the movie about the killer training himself with movies and finding out that—lo! behold!—it's not as easy as it is on the tee-vee.  That movie, made by anybody but Quentin Tarantino or Wes Craven, would probably have been insufferable, and they wouldn't have made it anyway, since they're rather of the opinion that kung fu movies and slasher films make pretty good educational materials after all.

Never boring despite the intentional vacuum at the center of his design, Saulnier keeps offering up thriller set-pieces that, by their very clumsiness, always hold surprises—and, thanks to the realist tone, never feel forced or contrived or unsatisfying despite being deliberately staged as inept.  We could complain, regarding plot points, only about the warm reception Dwight receives from an old high school pal, which seems a little too convenient in how it permits the narrative to continue toward its necessary ending; we could complain, also, about the reception Dwight easily gets in the middle of the woods on a cellphone that apparently charges itself based on Tesla's principle of wireless transmission of power.  But these are, obviously, pretty minor things to gloss over.

It's only in the climax itself that something like an elaborately well-designed trap finally appears.  As clever as it is simple, it remains the work of an amateur who's learning.  And that's as distinct as possible from Saulnier, who directs with both an assured hand as well as a powerful confidence that less can be more.  It usually isn't—it almost always isn't.  But Blue Ruin is better than just professional—its expert pace, the exacting beauty of some of its compositions, and (let's be honest) a few well-appointed kills overcome what could have been a pretentious meditation on violence.  Arguably, they betray the film's nobler nature; I wouldn't argue this, for it pursues its themes to nearly the bitterest of all possible ends.  But, in the overall, is it fun?  Oh, yes.  It's at least as fun as any triple-R picture is required by law to be, and for good reason: I think we'd all much rather have a good movie, than a droning Sunday School lesson about something we all already know.  Blue Ruin strikes the precise balance it must, the warm porridge of 2014's exceptional slate of thrillers.  It's not the vintage adrenaline of Grand Piano, nor the gender studies mindfuck offered by both The Double and Gone Girl, nor the formally innovative super-gimmick of Open Windows.  But Blue Ruin need not scream, to be heard.