It seems so unfair.  In a world where excellent movies like Guardians of the Galaxy get lazily composited posters full of actors and cartoons standing on different continents or, possibly, planes of existence, Enemy has no fewer than five cool posters, three of which are genuinely great pieces of design.  The short version of this review is that these posters are the fifth, fourth, third, second, and first best things about the movie.

That's the lede.  But get this: I was looking very much forward to finally sitting down with Enemy, Denis Villeneuve's follow-up to Prisoners.  I didn't like that movie, not really one bit; but despite his failure to supervise Jake Gyllenhaal's rather appalling act of character creation in that film and his responsibility for perhaps the single most hilariously mismanaged shot in modern industrial cinema, there's nothing else really wrong with that film's direction.  All its other problems were scripted, and even though nothing Villeneuve did was good enough to excuse them, his rollicking-competent thriller construction did permit one to ignore most of them, for most of the film's runtime.  Give this guy a good script, I thought—and a Gyllenhaal that isn't seemingly sabotaging his film on purpose—and he'll do fine.

Well, he hasn't gotten that good script yet, anyway.  Who knows?  Maybe Incendies was cool.

And on the plus side, Gyllenhaal is back in form—or forms, as it were.  Enemy, as you no doubt know, is a film about a pair of doppelgangers, based on a novel that shares a name with the Dostoyevsky ur-text, itself adapted into the other doppelganger picture this year, the unspannable gulf of quality separating one of 2014's best films from one of its most useless notwithstanding.  Till now, I'd never seen a bad doppelganger film—and I promise I'll stop using the word doppelganger soon—the closest being Dead Ringers, an overpraised entry on the cusp of David Cronenberg's Imploding Heads Period, which is still happening now and involves a great deal of disappointment in comparison to his earlier, better work with heads that burst outwards.  The small subgenre has otherwise proven almost absurdly good, counting amongst its ranks The Prestige, Moon, Adaptation, +1, and, of course, Bill and Ted's Bogus Journey, turning as it does upon the psychologically gripping narrative of the struggle between the Stallyns and their Evil Robot Us's.  On that note, it'd be unfair not to mention all those great time travel stories involving doppelgangers of a temporal nature, above all the extraordinary Primer.  Black Swan and Fight Club, too, are super-classics on the margins, though I hesitate to include them because of their lack of splitscreen.  There's also fare like Vertigo and the De Palma B-side Obsession, which do feature doppelgangers but aren't about the protagonist directly dealing with his or her own twin; and we should never forget about the Star Trek franchise, about 20% of which is composed of doppelganger stories.

In Enemy, Gyllenhaal is Adam, a milquetoast history professor with something barely resembling an existence, his routine punctuated only by nearly-wordless, wholly-passionless orgasms with his girlfriend (or possibly his malfunctioning sex robot), Mary.  (I'll point out at this juncture what a fucking disaster Melanie Laurent's post-Inglorious Basterds career has been, and this has got to be her lowest point; the woman who helped kill Hitler and functionally served as the co-protagonist in a Tarantino film—sure, his worst film, but still kind of a great one—now gets a role that could literally be played by anybody, with what I think is fewer than ten lines, and possibly not even five complete sentences' worth of words.)

One day Adam is watching a movie.  He spots a face in the background—his own face—staring back at him.  Gyllenhaal is Anthony, then, a struggling/failing actor married to the pregnant Helen.  (And her performer is scarcely better off than Laurent, serving principally as further proof that the suddenly-omnipresent Sarah Gadon, a serviceable actress and one of the hottest women in the world, also has the worst agent in Hollywood.)  In any event: Anthony and Mary's marriage is collapsing thanks to hints of infidelity and some kind of pretentious, inscrutable, idiotic symbolism.

That brings us to the actual opening of the film, which takes place in a sex club (loosely defined) where men pay to watch beautiful women—hahahaha, Jesus Christ—stomp on gerbil-sized CGI spiders.  I'll give it this, it piques the interest.  Spiders are a recurring motif in Enemy—great guns, how they recur—and the best anyone has come up with is that, by representing Adam and Anthony's failure to control the women in their lives, they replace the part of Enemy where characterization was supposed to go, or by representing totalitarianism, they replace the part of Enemy where plot and theme were supposed to go.  The latter interpretation is evidenced by the refrain in Adam's lectures to his class about the nature of dictatorship and its hatred of individual expression; I had initially marked this as a bitter if faintly amusing joke about the hollowness of any tenured professor's canned lecture notes, repeated till individual expression, either his own or anyone else's, is swallowed by the formula.  Yet apparently, we were supposed to take his barely-articulate HIS 101 pronouncements as a serious meditation on ideas, and this is simply an enormous bummer.  Also turn your attention to the eerie shots of telephone wires, which kind of look like spiderwebs, but mainly mean that Villneuve has probably seen It Came From Outer Space, which is a much better movie about being replaced by affectless doubles—and, for that matter, a better one to use spiders as a heavy-handed metaphor.  It's also a better movie about wires.

Still, "affectless" may be slightly too strong a condemnation of Adam and Anthony; Gyllenhaal negotiates well the challenge of playing two semi-human characters as entirely distinct in their miserable flatness—this time without resort to trick blinking.  Still, as I try to manage my immense expectations for Nightcrawler, I find myself realizing that the wholest person Gyllenhaal may have ever portrayed is Donnie fucking Darko, which is really kind of insane when you think about it. 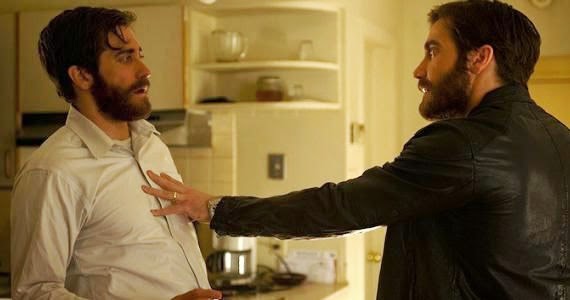 But you were the bomb in Source Code, yo!

Where Enemy actively, maybe even deliberately fails the most is in its presentation of person-shaped objects that react, in no wise, like actual people to any of the events occurring to them.  For example, Adam reacts completely improperly to the discovery of what would almost certainly be a twin brother, at least if this film were working in anything but its dysfunctionally symbolic mode—and yet they make hay of this possibility, so it's not exactly off-limits on the basis of the text.  Rather than a "Hey cool!" or even a "Whoa weird", Adam's response to the existence of his twin is jabbering, instantaneous ego death.  Of course, by pretty much Day 2, Anthony has already hatched an elaborate plan to rape-by-fraud Adam's girlfriend.  Adam's countermove here is to attempt to rape-by-fraud Anthony's wife, who—well, I should pause at this point to note that I have related very nearly everything that happens in Enemy without really trying.  But it's funny how one references Revenge of the Nerds' infamous sexual terror in a perfectly sensible way, in a review of a misogynistic 1980s near-contemporary, and then it hits you like a ton of bricks that you absolutely should have saved your reference for the 2014 art film, because with the 2014 art film it's even more germane.

Still, I haven't told the whole story of Enemy.  For example, I did avoid mention of how the two men, one of whom has already demonstrated a crazy streak a mile wide, meet in a motel room instead of, say, a nice Denny's; nor have I said how almost no line of dialogue does anything other than relate its spider-code or the few bald, ugly plot points.  It's a dour, dry, sometimes boring film.

Yet Enemy's thriller mechanics somehow survive their brutal savaging by the script and manage to hold the interest, because Villeneuve possesses some kind of black movie magic that I don't pretend to fully understand—I'm just going to reach into the hat, I pulled out "editing," so we'll go with "editing"—and he does not fail to generate an oppressive, choking atmosphere and the tension inherent to it.  Oh, wait, it's probably because the film, as you will notice immediately and will start to titter at by minute 20 or so—because it never stops—is nearly monochromatic.  Specifically, it is a strident and infinite yellow.  The effect is to suggest that the film's Ontario setting is suffocated by a Stage Billion smog alert, which is an unintuitive choice, but there it is.  I guess Denis Villeneuve's Canada is the new Steven Soderbergh's Mexico, and it speaks some kind of volume about the monotony of Enemy that the color-coding in Villneuve's film is one color for every single shot.  It's overwhelming enough that when Enemy's production designer apparently got drunk and some assistant rented Adam a blue motorcycle, the clash is almost eye-searing.  Yet it's a deliberate and affecting enough choice that, if the movie were any good at all, I still might have even praised it.  I mean, I like Zodiac. 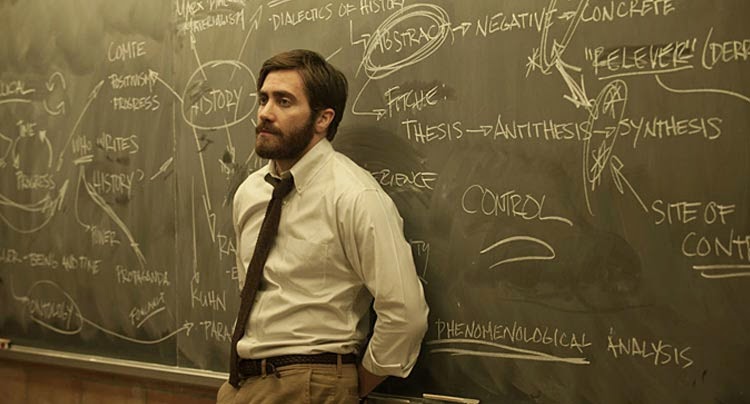 The movie isn't good, not at all, except in the sense that it does maintain a pace, and it is short.  That's not nothing these days, I guess—it beats, with a stick, 2014's other black hole of symbolism collapsing under the gravity of its own pretensions, Under the Skin.  This stick is not of sufficient size or power to actually grade it any higher; I only mention it to say that when the year-end list comes out, it will occupy a slightly nobler position atop the heap of 2014's sub-mediocre garbage.