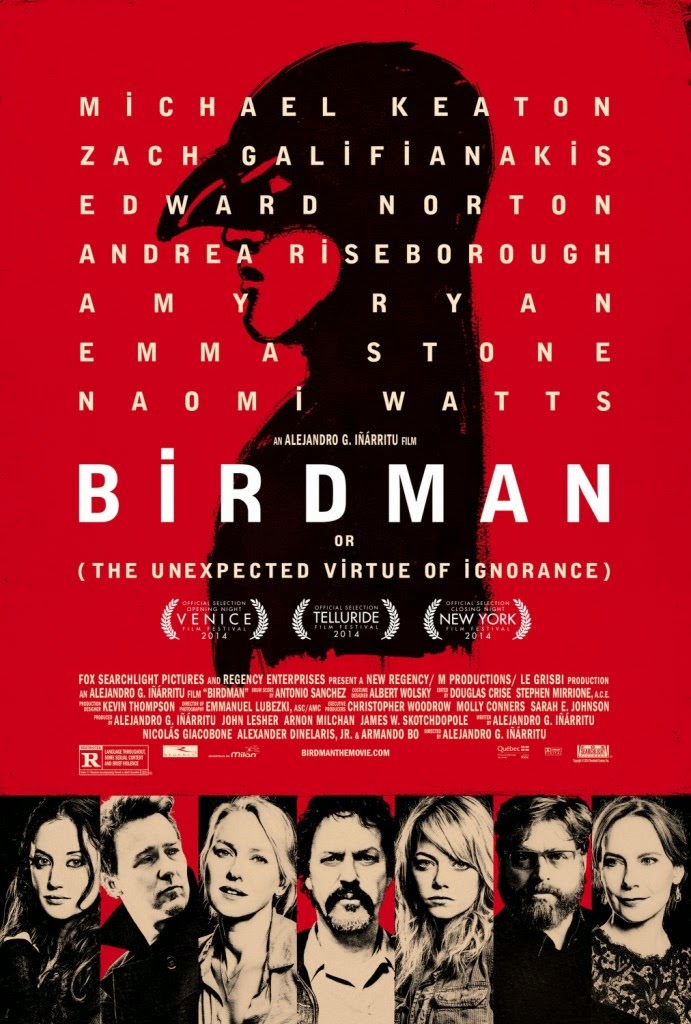 Birdman is very close to the best movie of the year, and it is almost without a doubt the hardest.

Around 98% of Birdman's 119 minute runtime is taken up with what looks like a single, uninterrupted take.  It is stitched together out of nine or eleven or thirteen actual single, uninterrupted takes, each of extraordinary difficulty, each performed by actors with faultless timing, and each beautifully captured by the virtuosic cinematographer who's become known as cinema's long take expert, Emmanuel Lubezki.  (You may remember Lubezki from the best movie made in the last 34 years.)  I don't know if the fact that Birdman, pretty clearly, takes place in one man's mind rendered it easier to make, or harder.  I would suppose "much harder," since Birdman involves a truly enormous expanse of space, with probably a good dozen locations, and takes place over a solid week without ever breaking the illusion of the single shot.  God, look at this movie.

Of course, at this point, all Birdman had to do to be essentially perfect was fail to be boring.  I cannot impress upon you how not boring Birdman is.

Meet Riggan Thomson, he's basically Michael Keaton: 25 years ago, he achieved superstardom by donning the beak of Birdman in a hypersuccessful, billion-grossing trilogy of films.  His career since has been a slow-motion tumble down the mountain he climbed too early in his life to really appreciate, rejecting further superhero films in favor of projects no one cared about.  Now Riggan is gambling what remains of his fortune (not much) and his sanity (barely anything) on one last hope for a return to relevance: Broadway.  That this is the most wrongheaded move a fragile egomaniac could possibly make is expressed in turn by his personal assistant/ignored daughter, Sam, in a terrifying monologue that everyone should have screamed at them by someone they love; and by a fiercely caricatured theater critic; and finally—most distressingly—by the growling, abusive voice that only Riggan can hear, the one that sounds a lot like a certain winged avenger. 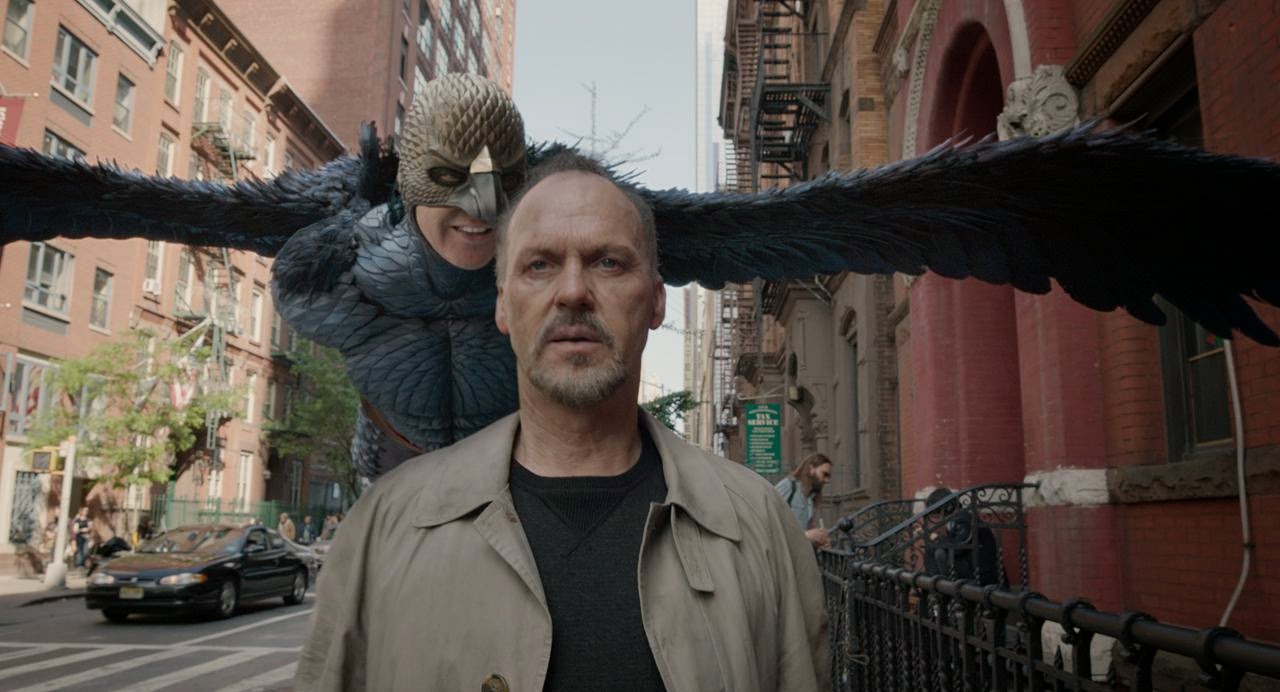 Riggan's play is a stage version of Raymond Carver's "What We Talk About When We Talk About Love," newly adapted by Riggan, who is also directing, and also starring.  The production is, predictably, an ongoing disaster, beginning when  Riggan's (atrociously, hilariously bad) co-star gets his head caved in by a falling light during rehearsal.  The part gets recast with his other co-star Lesley's live-in boyfriend, famous Method actor/dangerously insane person Mike Shiner, who is basically Ed Norton.  Form follows function as a story partially about Mike upstaging Riggan in his own play becomes, in the telling, about Norton upstaging Keaton in his own movie.  Don't you worry about Keaton, though.  He's wily, and when the time comes he takes his movie back.  Also, he punches Norton in the nose something like four separate times, which really never stops being great.

Bear in mind that there is no other way, or at least no better way, to understand Birdman—rather, Birdman or (The Unexpected Virtue of Ignorance)—than as Riggan's fantasy, or as Riggan's memories, or, at least, as a hyperartificial representation of Riggan's subjectivity.  I plant my flag firmly on the hill called "every moment in this film is an hallucination," since this makes certain scenes outside of his immediate perception easier to comprehend, and renders every single player within this self-evident dreamscape a projection of Riggan's own mind, each presumably representing something or other.  (Some are easier to place than others: Mike is his own warped artistic aspirations spiraling out of control, Sam is his lost future, Birdman is his hunger for fame and adulation, etc.  Some may not have any particular meaning: who knows what Laura represents, other than the idea that Riggan likes to watch women make out with each other?  Well, Andrea Riseborough is most enjoyable anyway.)

No matter how you understand Birdman—well, it doesn't even matter if you understand Birdman.  I doubt I do, on the strength of one viewing.  I'm not sure it's entirely understandable, or meant to be.  The point is that it's a wicked satire of fame and self-absorption, populated by ultra-talented stars, beautifully shot, lit, and production designed, and, most importantly, it's so fucking funny.  It's also, at turns, intense, and thrilling, and heartbreaking.  But above all is it funny.

There is literally only one problem with Birdman.  Actually, two, if Ed Norton's retreat into the background during the last 30 minutes counts as a problem, and I'm loathe to think it does, but my heart says yes.  Or maybe there are three problems, if the incorrect use of parentheses in titles bothers you.

No, the only real, identifiable issue with Birdman is that it goes on five minutes too long, and it's a little telling that the least necessary part of the picture occurs following a regular old cut.  Birdman ends falsely once, only to keep going and make basically the exact same gesture again—but not half as effectively the second time.  The only reason it's there is because they wanted two versions of the same scene, touching on different aspects of Riggan's psyche, with two different emotional resonances, and couldn't decide which was the best.  It's very obvious which is the best, and it's not the one with the title drop in it.

Birdman might have been a great film even without its tricky long take conceit.  With it, it's an essential experience.  Birdman is more marvelous to behold than anything else released this year, let alone something fitfully beautiful but a bit stale, like the much-ballyhooed Interstellar; Inarritu's exercise in weirdness exceeds in formal ambition even that neo-classicist masterpiece, Grand Piano.  Maybe not surprisingly, it's the most visually exciting thing I've seen in a theater since Gravity.  The beauty of the long take in Birdman isn't all technical, though.  The way it traps the manic energy of the scenario and the actors—and you in there with them—is like bottling lightning.

To illustrate this, I'll end this review by noting that Emmanuel Lubezki, while already acclaimed as eminent in one field, may now be staking a claim to be our single most accomplished expert in another: namely, lighting the spit shooting out of actors' mouths as they scream invective at each other.  The man makes Michael Keaton's saliva spray look like just the most wonderful thing in the whole wide world.  Too bad this superhero movie's not in 3D.