Cardboard Science: It's long and hard and full of uranium 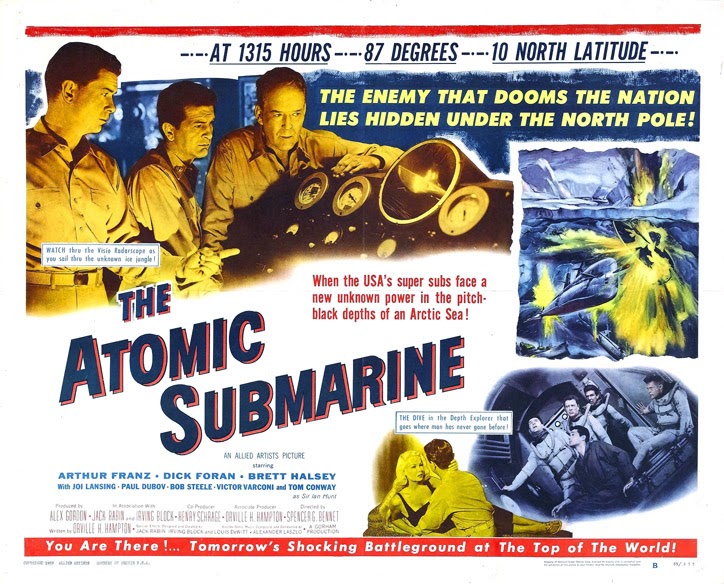 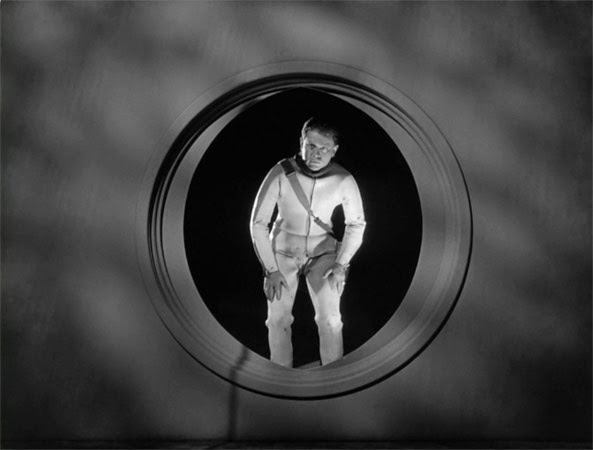 The Atomic Submarine opens like all 1950s sci-fi should: with eerie electronic tonalities over impressionistic credits, that then give way to a narrator ruminating hard upon stock footage of Man's [sic] conquest of nature.  He authoritatively informs us that, beginning in the late 1950s (that's Now), and continuing into the 1960s (that's The Future!), the promise of the Arctic Ocean as a shortcut across the globe has been fulfilled.  Atomic Submarine is thus one of those speculative fictions that's barely speculative at all while still being rather dumb in its specifics.  Preoccupied with a niche technological advance, it takes its central concept to its logical extreme, before diving right over the plausibility cliff.  So behold: cargo atomic submarines! passenger atomic submarines! and, far more interestingly, military atomic submarines.

Of course, the latter actually existed, due to making some kind of sense.  In 1954, the USN launched the first nuclear-powered submarine, the USS Nautilus.  Four years later, in a propaganda push against Sputnik, Nautilus became the first marine vessel to reach the North Pole.  Eight months before Atomic Submarine premiered, the third nuclear submarine, USS Skate, crashed upwards through the ice to become the first vessel to surface at the North Pole.  The point of these exercises was to demonstrate to all interested parties that American boats could remain submerged, navigate the Arctic, reemerge on the other side (or from beneath the very ice cap), and threaten the Soviets the same way their advantage in outer space threatened us.  However, President Eisenhower blithely suggested that in the future there might be civilian nuclear submarines too, forging new trade routes beneath the Arctic ice.  Somehow B-producer Alex Gordon failed to give Ike his rightful story-by credit.

Undersea sci-fi was the natural next step for Gordon and his scenarist, Orville Hampton.  The year previous, they'd already achieved success with a prosaic submarine thriller,  Submarine Seahawk.  This is how Gordon, a refugee from unfair dealing at AIP, was able to wheedle the princely sum of $127,000 from Allied Artists and other investors.

And at least eight, maybe even ten thousand is visible on the screen.  One of Submarine's special effects designers was Irving Block, best known for co-creating the concept for Forbidden Planet, but money matters: in every single way that Planet appears to be a movie that could hail from 1968, Submarine looks every inch the Poverty Row independent film that it is.  It may be a telling detail that Alex Gordon was an associate of Ed Wood.  Nevertheless, at moments, Atomic Submarine still looks better for being cheaper.  At other moments, though, it is a pitiable spectacle. 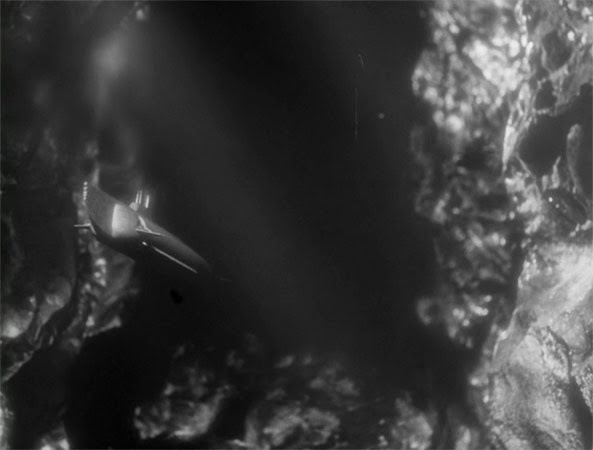 Welcome aboard the USS Tiger Shark, a submarine with a nuclear engine so extravagantly powerful that it was unnecessary to design it in reference to hydrodynamic efficiency: note the bulbs of its torpedo bays, protruding unattractively from its body like a pair of deadly goiters.  (I'll remind you again that real nuclear submarines were commonplace by 1959 and looked, shockingly, like submarines.)  The sub prop itself is also terrible; I think it may genuinely have been made of cardboard.

Atomic Submarine's premise would be enough without much further embellishment.  The plot kicks in fast, with a series of mysterious disasters afflicting the polar maritime trade that everyone is polite enough not to explicitly ascribe to the dastardly Red Fleet. 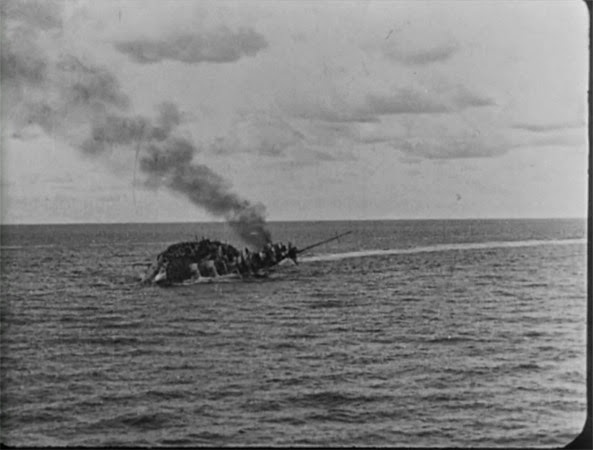 Events don't continue in that vein: instead, Atomic Submarine rapidly becomes The Barely Adequate Abyss.  As usual, though, I get ahead of myself.

Our hero is "Reef" Holloway, XO of the Tiger Shark, whom we meet as he's called away from an urgent session of hanky-panky.  (His married pal, who merely abandons his daughter on her birthday, asks Reef, "What's worse than disappointing a little girl?"  Reef, crabby, replies, "Disappointing a big girl.")  Reef's told there will be a scientific team on this mission.  As Reef is Arthur Franz, he's pleased: he likes science almost as much as he does blondes.  In fact, he's thrilled—his old friend and teacher Dr. Carl Neilson (USN, ret.) will be joining the expedition.

Sadly, it is actually Carl Neilson, Jr., whom Reef just hates: Carl's an outspoken voice in the pacifist movement. (Nominally set in the mid-1960s, Atomic Submarine is, surprisingly, a bit predictive, but even by 1959 people were getting wary of nukes.)  Reef is clearly of the opinion that the best thing Carl could do is return to shore, where he can listen to his jazz records and shoot his heroin.  See, what he really despises about Carl isn't his pacifism, but the emotional toll Carl's activism has taken on the senior Neilson, decried by the younger man as a warmonger, driven to death's door by the son's rejection of his father's very identity as evil.

Atomic Submarine could arguably have revolved fully around this clash of personalities as they face the moral quandaries of nuclear war, a sci-fi Crimson Tide forty years before its time.  It's not.  It's not even a terribly great version of what it is—despite some interesting glosses on the standard template, it's an alien invasion story, as fully derivative as they come, and they came pretty damn derivative by 1959.

Though it's difficult to meaningfully spoil a 66 year old film, I realize that's exactly what I just did.  Yet in this, I follow Atomic Submarine itself.  I don't want to overstate how "shocking" this "twist" might have been, but the film displays a palpable impatience with its own central mystery that even 50s SF pictures usually avoid.  Early, we see a glimpse of the culprit that, in full knowledge, can be interpreted only one way; it remains tantalizing, however, rather than explicit.  Yet too soon another scientist, Sir Ian Hunt, simply announces that they're on the trail of an extraterrestrial.  He goes on to extrapolate, on the basis that he has a Ph.D. and a noble title, that the aliens are likely an aquatic species.  The script lacks the decency to even treat his ravings as a hypothesis, assuming that since Sir Ian is right, after all, then the most efficient thing for everyone else to do is just agree without asking too many pointed questions.  Like, "Has LSD been invented yet?"

Anyway, by this quick, hard stroke of weirdness, the tension between Reef and Carl subsides: facing an inhuman enemy they agree needs to be destroyed, they (surprise) grow to respect one another's skills and bravery.  (On the other hand, if I never see another weenie argue to preserve a lethal monster for science—ala The Thing From Another World or Godzilla—it will be way too soon.)

The sub confronts the "unidentified flying floating object"—I don't know whether to laugh or barf—and if anything it looks even lousier than the Tiger Shark.  Sir Ian once again has something to say, offering what must pass for clever foreshadowing in Atomic Submarine, describing the saucer as a "Cyclops."  (Someone's been reading ahead.)  In a neater touch, they deduce that the saucer is not powered by nuclear batteries, but by the magnetic pole itself—that's its reason for hanging around the Arctic Ocean, although one realizes later this must be cramping this pioneer's style.

They chase the saucer, facing it in pitched battle, and this is cool (it looks like little kids making a movie, actually, but Alexander Laszlo's music helps, and the effects are charming—plus, give it this, you can absolutely tell what's happening in the battle, making it better than half of the sci-fi action films released today at 1/1000th the price).  Torpedoes are useless, but ultimately they ram the fucker, crippling both ships, marrying them in a sinking heap of twisted metal. 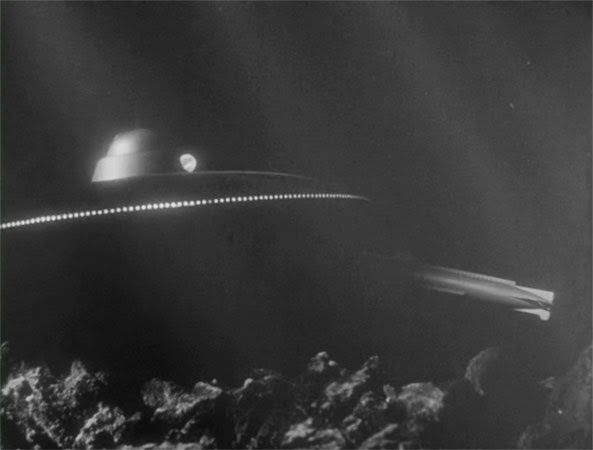 A young David Cronenberg gets an idea.

I've been dismissive of the alien plot, but the best part of movie comes when they board the saucer to free their prow from its embrace.  This is where Atomic Submarine's austerity pays off, with ultra-minimalist imagery standing in for the wall-to-wall blinking gee-gaws one might expect.  It's an uncanny mash-up, influenced by Expressionism and outright thieving from Chuck Jones' iconic 1958 cartoon, "Hare-Way to the Stars." 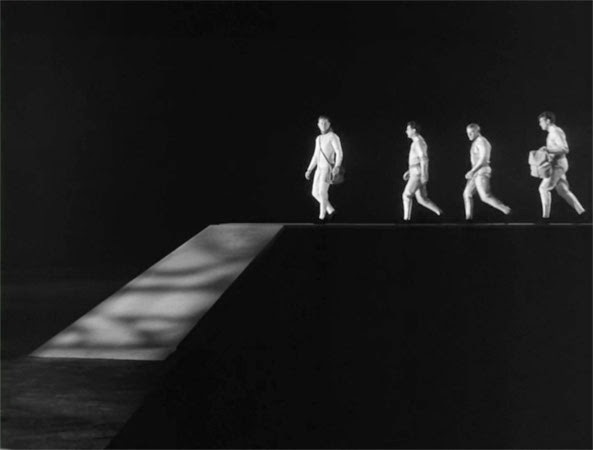 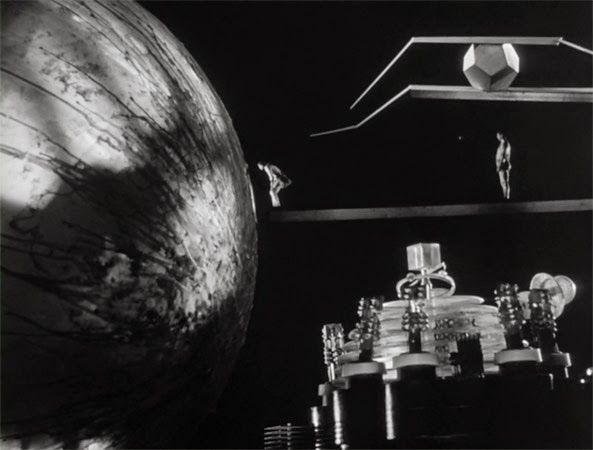 As the away team discovers that the saucer is healing itself (!), Reef is telepathically beckoned, drawn toward the Pilot.  Now, The Trollenberg Terror was a year-old memory by this point (and It Came From Outer Space was fully six years in the past), but if you ever get tired of one-eyed puppets from beyond the stars, dear reader, well, we obviously have significantly different tastes. 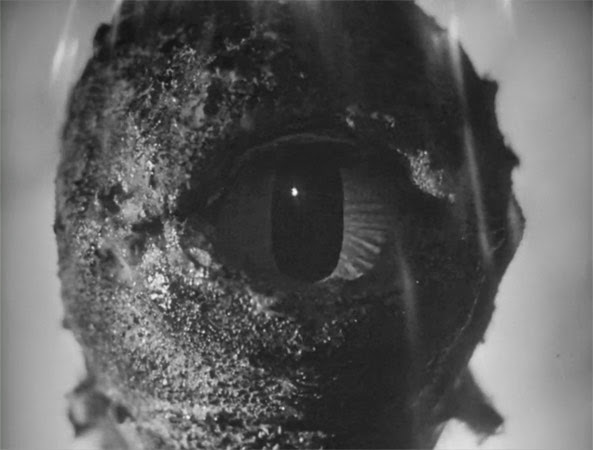 To fully describe what happens next would be to spoil the movie completely.  Suffice it to say that it involves death rays, melting faces, a convoluted but interesting colonization plot, some gore that would make Odysseus smile, and—finally—a full-throated endorsement of nuclear weapons as a tool for defending Earth from all commies, cycloptic and binocular alike.


The Atomic Submarine has some legitimately great individual scenes, especially for a movie shot in eight days for practically no money.  Unfortunately, it's let down by its disinterest in building upon the spookiness, or upon the themes, introduced in its first half-hour.  Overall, it's good, but nothing special—an entirely typical specimen of the genre as it entered the stasis of the early 1960s. 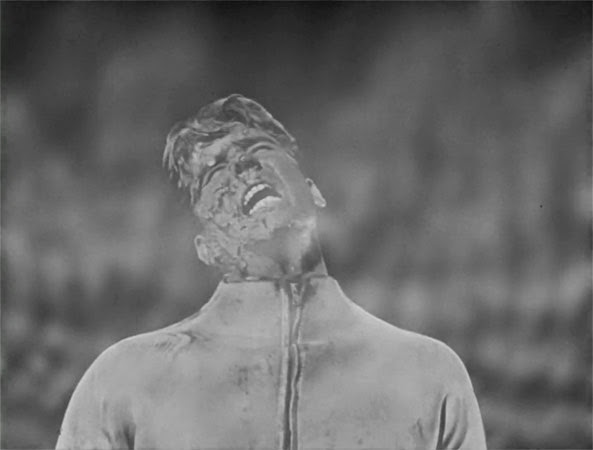