Nancy Drew in The Secret of the Haunted Vagina 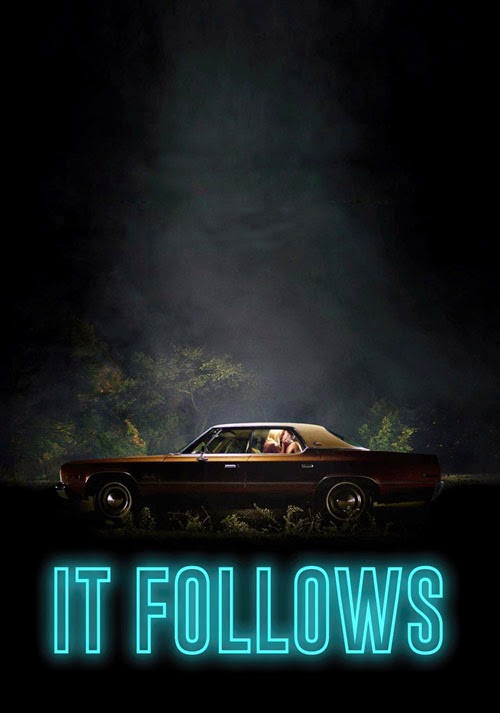 Exceptional technique meets a great idea, yet somehow the result is only a very good movie.

At night, a young woman has sex.  Then something comes to kill her.  Paradigm shift?  Well, maybe it is, maybe it isn't, but David Robert Mitchell's It Follows has the distinction of literalizing its sex-is-death conceit so thoroughly, and engaging with it so directly, that it comes off as a kind of minimalist genius.

After Jay and her new boyfriend bang, he kidnaps her, binds her, and explains to her what it's going to be like.  But he's not a crazy sex murderer—which is unfortunate, since that might have been easier to deal with.  Instead, he has passed onto her a curse.  A creature is coming for her.  It can take on any form, it is invisible except to others in her sexual chain, and though it will approach her only at a walking pace, it will never rest.  She can run, and hide, but it will always follow, and when it reaches her, it shall kill her in the fashion we've already witnessed in the film's bravura opening set-piece, tearing her limb from limb.  Then it will come back for him, and the one who gave it to him, and so on, until it reaches its nebulous origin and its supernatural plague is (presumably) burned out of the world.  He tells her all of this, for it increases his own chances of survival.  He tells her also that she too can pass the curse onward.  All she has to do is fuck someone else.  Then he lets her go, and she and her friends try to figure their way out of the situation.  Thus do they struggle, through an awful lot of enigmatic storytelling, an underwhelming climax, and a final shot that largely but not entirely represents a return to the same level of excellence occupied by the brilliant opening, the rad monster concept, the fine lead performance from Maika Monroe, and all of the previously-comprehensible permutations of the film's scenario.

So, as you may have noticed, It Follows can be frustrating in two of the worst ways a movie could be.

First, it is self-consciously arty while simultaneously refusing to clarify what its narrative and visual metaphors actually represent, beyond the metatextual fact that Mitchell really likes loaded imagery (water! fucking! vegetation! Detroit!).  I might as well say that while I begrudge no one their preferred interpretation of its fragments, my own is that It Follows is too ridiculously specific in (most of) its symbolism to function outside of a meditation on STD ethics.  However, I know that Mitchell himself doesn't favor this interpretation, which makes me more frustrated with It Follows than I would be if I didn't.

See, Mitchell is annoyingly aware that since his movie is not only about a sex monster, but is also a chilly, controlled exercise in filmmaking technique, it cannot and will not be read as anything but some kind of allegory—so why not dump as many symbols as you can?  Somebody out there will put together all the pieces they like, and read it any way they want.  This is not the hallmark of rigor—it's the hallmark of the triumph of sweaty pseudo-intellectual overexertion over such trifles as elegance and communication.

Though the film is unhelpful in providing a decryption key for its attempted universal allegory (social disease? sexual abuse? romantic baggage? the dawning awareness of mortality that comes with adulthood?), there is the second, compounding problem of It Follows.  While throughout an effective horror film, it is also a sloppy one, on the purely literal level any movie needs to work on first.  I mean, to begin with, it never even defines sex—and this is the littlest issue, but surely it ought to have at least come up. (What happens, for example, if there's a foursome? Elliptical editing happens if there's a foursome.)

Amongst the film's major misjudgments, however, must be counted Mitchell's extraordinarily counterproductive efforts to doll up his monster.  The titular It's tactical forms vary, but only a scant few pass muster as workable "disguises."  The majority of its strikingly inconsistent forms are the kind of bog-standard nonsense that belie descriptions of It Follows as "innovative."  Take one of its early shapes: a zombielike girl, rampaging slowly through the kitchen while pissing herself—solidifying the impression of the beast as sturbborn but also quite dim.

Not only do the monster's bad choices undermine its effectiveness, but—and far more importantly—they actively detract from the horror of the thing, by calling attention to all of its artificiality.  Later shapes combine Mitchell's undisciplined symbolism with even further explorations into the edgy realm of trying way too damn hard.  The monster of It Follows is a budgetary godsend—it's just extras glowering while they walk toward the camera—but it could've been even cheaper while being more effective, had Mitchell trusted in his audience's capacity to be frightened by the concept, in much the same way that he trusted in their capacity to not be bored.  For my money, the scariest forms we ever see the monster take are the scariest because they're ordinary.

Mitchell continues his anything-goes approach with a scene where it's pretty certain the monster is merely playing with its food.  I'll hasten to say that nothing I've complained about so far is truly film-breaking, for—let's be scrupulously fair—It Follows' conceptual hiccups afflict practically every supernatural horror movie that's ever been made.

But finally, the sloppiness culminates in a kids' adventure set-piece that would be impossibly charming if it weren't also impossibly stupid.  Sadly, it is, suggesting that the characters think they are fighting a xenomorph or—perhaps—a very determined bear, as opposed to a mystical monster who is immortal and invincible.  Maybe the worst part is that "stupidity" was, indeed, Mitchell's avowed intent, because teenagers is dumb.  Too bad Paul, the Active Male supporting character, has never seen Terminator 2 or Lethal Weapon 3, but—as an aficionado of vintage science fiction and also, apparently, thanks to one of several weird time-defying production design decisions, vintage televisions—you'd think Paul might've at least have seen The Blob.

It's a testament, then, to the quality of It Follows' manufacture that I still really enjoyed it.

"Manufacture" may not be the most flattering term to refer to a film's construction, but it's a fitting word for something as lovingly built from existing blueprints as It Follows.  It's close to the exact movie John Carpenter would have made if he had access to cheaper, smaller, and more technologically advanced digital cameras, and if he were both much showier and far more pretentious; alternatively, then, it's a lot like the movie To the Wonder might have been, had Olga Kurylenko been banging random guys to rid herself of a vengeful ghost, rather than merely a loveless Ben Affleck.  Either way, Mitchell's film, shot by Mike Gioulakis, is something close to an advertisement for the very concept of cinematography, classical in its influences, lit like they consulted with an angel, blocked with exquisite timing, focally disciplined, and madly, deeply in love with axial symmetry.  (There is even one bonkers shot that goes for near-flawless in-camera radial symmetry—and guess what?  It's superbly symbolic.)  Meanwhile, Julio Perez' editing is as deliberate and slow but occasionally surprising as the monster is, even more genial to It Follows' choking atmosphere of doom than its photography and its bombed-out Detroit Neverwhen.  Of course, this is possibly because editing has a far more difficult time being so bracingly overdetermined.  Ah, but I saved the best for last—that's Disasterpiece's score, the most faithful and perseverant entry yet into the recent and gratifying fad of film scores that drink deeply from the grail filled to overflowing by Carpenter and Alan Howarth's own iconic works in the 70s and 80s.

Thanks to craft, and to the inherent power of its allegory—however confused it may be—It Follows is still a pretty exceptional film.  But curiously, perhaps unfortunately, its genuine merits have already been submerged beneath a flood of superlatives.  My recommendation is to see it, but try not to drown in the tidal wave of effort that constitutes It Follows' actual presentation.