The Fall of the House of Nathan 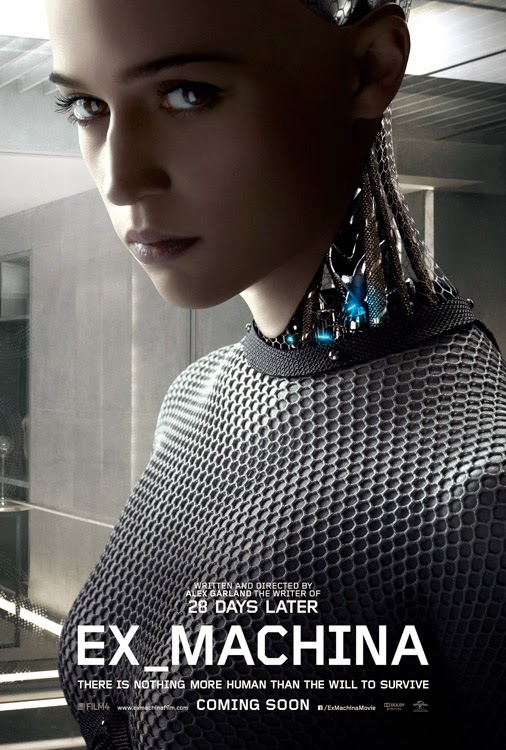 This is throwback science fiction, the way it was meant to be made.

Manners say I oughtn't put it quite so bluntly, but I'm afraid I have a powerful need to tell you that screenwriter Alex Garland has a history of sucking.  Of course, he earned credit for his last sci-fi screenplay, the great, straightforward actioner Dredd, and it would be unfair to forget his script for the Zombie Renaissance's patient zero, 28 Days Later.  Unfortunately, between those two peaks was a valley and that valley was full of shit.  First came Sunshine, a lazy riff on Alien that couldn't abandon all of its interesting ideas fast enough in order to replace them with the absence of joy.  Then arrived Never Let Me Go, which was even worse.  That was an adaptation of a Japanese British novel, itself evidently based on Parts: The Clonus Horror and/or The Island; either inherently or through his translation of the material, Garland's script was a thousand times dumber than both combined—I know—and it gave rise to one of 2010's worst pictures.  It adds up to one spotty filmography for Mr. Garland.  He's hit artistic lows so wretched that it's hard to believe that afterward he was still permitted access to a keyboard.  Yet in a movie miracle, Garland not only got to write again, he got to direct.  Before I describe his first effort as an auteur, however, permit me to link to a wonderful interview where he correctly identifies strong auteur theory as bullshit.  That's called getting back on my good side.  Our subject for today is his collaboration with, inter alia, production designer Mark Digby, editor Mark Day, and cinematographer Rob Hardy.  Ex Machina is good news, and the good news is this: today, Alex Garland doesn't suck.

That said, the title of his directorial debut does, at least a little.  At once pretentious, cliched, and obvious, it feels like a placeholder.  And while the movie may be terrific, one must observe it's hardly because that title fails to peg it as the derivative creation it is—just for starters, it's practically an insult to your intelligence to even mention its debt to Frankenstein, even though it hews as closely to the ur-narrative's reactionary luddism as any tale within its subgenre ever has.   Yet the film's very didacticism, its enthusiasm for trope, and its brazen lack of thematic subtlety all become surprising strengths, as it pursues a tale that's been told, literally, thousands of times.  Garland, working from the same mass-produced parts as a legion of imitators, has nonetheless built the worthiest fable of a modern Prometheus to come along in years.

Our man is Caleb Smith, a young coder for Bluebook, his world's preeminent search engine.  In a stroke of fortune—to use the most neutral possible term—he wins a company-wide contest to spend a week with the genius behind Bluebook's inception, Nathan Bateman.  To that end, Caleb ventures north, arriving at a modernist fastness built upon the edge of a glacier.  Within, he meets his employer, the Ascended Nerd.  Nathan is, at turns, cerebral and physical, chummy and domineering, manic and depressive, sober and drunk—Gates plus muscles, Jobs less cancer.  Caleb soon learns that he's not here simply to while away a week with his boss in his supervillain lair, filled with mysterious locked rooms and tended to by what appears to be a mute henchwoman.  No, Caleb's here to do a job.  Once he has signed on to complete this as-yet-undefined task, he meets a shocking third member of the Bateman household—her name is Ava, and Ava is a robot.

Ava walks, speaks, and perhaps even feels: she was designed by Nathan to achieve conscious awareness.  Caleb's role is to test her, and tell Nathan if the mind he built her chassis to house is real.  But the inconsistencies stack up.  Nathan's panoptic voyeurism becomes apparent.  When, finally, Ava takes advantage of the endemic power outages that plague Nathan's home to tell Caleb flatly that the man is lying, it becomes clear that this story cannot end except through violence and terror.

Or maybe it ends happily.  Sure.

Ex Machina is the stuff of Gothic horror proper, trafficking in the same choking, claustrophobic atmosphere, the febrile tension of personalities clashing in a space they cannot leave, and, above all, the pervading sense of moral decay.  Nathan's home may be too new to deliver the symbolic physical decomposition to match, but his mere presence—an overpracticed swagger that fails upon even a second glance to conceal his ugly, pathetic neuroses—is surely toxic enough.  Moreso than Shelley, Ex Machina takes its cues from Poe.  (On reflection, good God, how it takes its cues from Poe.)  However, instead of the florid, overheated narration of that tortured soul, Ex Machina fills its hollows with the science and philosophy underlying its premise.

That's precisely what makes it different: it has more than just a passing interest in the parts that most such stories simply build upon for the purposes of action, horror, or romance.  Ex Machina is elevated by this intellectual curiosity, manifesting as a willingness to use conversation between the leads to dig deeply into its own foundational ideas.  It is, perhaps, the least condescending science fiction film since Primer.  Erudite—sometimes to a fault—Ex Machina is more kin to movies like Mindwalk or Waking Life than Terminator.  It should be conceded that many of the ideas from which Garland constructs his narrative are ideas that any pie-eyed, geeky undergrad has already considered.  Nevertheless, one appreciates any movie about a thinking machine that manages to be this thoughtful itself.

In pursuit of its aims, Ex Machina proudly recapitulates the art film arrogance and cold anti-humanism of film science fiction's second great flowering, roughly 1968-1977—what Keith Phipps calls the Laser Age (maybe with a little too much insistence, given that we agree that the most laser-driven SF film of them all, Star Wars, more or less brought it to a close).  As a would-be heir to 70s SF, Ex Machina earns the right to stand next to Duncan Jones' Moon, and that's as high a superlative as I could possibly give.  They're perhaps the only two latterday features that imbibe the 70s' idea-driven, imagery-soaked temperament, while still managing to stop before they can get drunk on it, opting to remain comprehensible narrative cinema instead of moody nonsense.  In Ex Machina, Garland doesn't truck with enigma for enigma's sake, like (for example) the gorgeous but risible Beyond the Black Rainbow.

Where Ex Machina departs from its forebears—to its great benefit—is that it views its science fiction through a decidedly contemporary moral lens.  Nathan hasn't just built an AI, but a body, a specifically female body, wearing an attractive face and constructed with a mesh superstructure mapped to the contours of a woman.  Like Caleb, at first you'll be staring at the transparent parts, marveling at the CGI that brings Ava to life; like Caleb, you will find yourself surprised and perhaps discomfited when Ava dons a wig and clothes and thereby suddenly, irrevocably sexualizes herself.  At this point, you will finally notice Alicia Vikander's expertly-controlled performance, that I'd be happy to call star-making, if only we still had movie stars.

(But let it sink in.  Nathan has already invented sexbot technology, a hundred billion dollar idea that would probably usher in world peace and close Tumblr.  This was not enough.  He had to give it consciousness, or a simulation of consciousness sufficient that it would chafe at his attempts to test and control it.  To go further would be to hint too much at the horrors Nathan's haunted palace stands witness to.  It is sufficient to say that one lesson of Ex Machina may be that power cannot feel itself expressed without powerlessness; the other may be that some men feel no guilt at creating a life, then beating it till it adopts the arbitrary identity they have devised, down to the smallest detail.  And the discussion question inevitably presents itself: would Caleb care half as much if Ava were Adam?  True to its nature, the film practically answers this for us, in a deliriously perverse, almost funny revelation.) 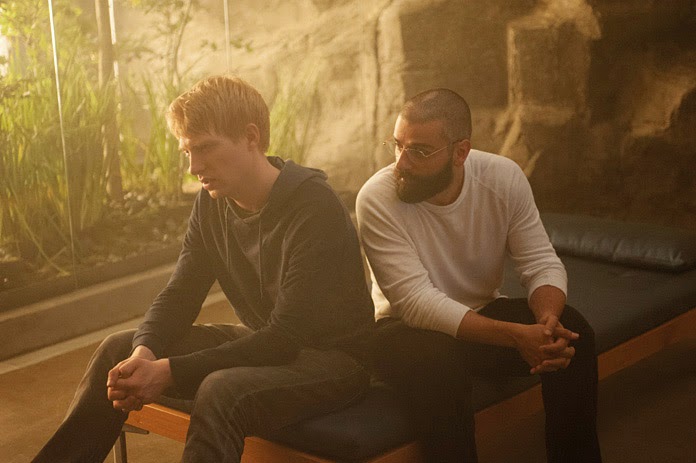 "It's not like how John Hughes made it out to be at all."

Ex Machina takes much of its aesthetic from the Laser Age, along with its tone.  Garland's team doesn't seek to create a period piece though; they allow the past to simply inspire them instead.  Nathan's compound is strikingly effective work of production design on a low budget. It's a hybrid of nature and artifice, split between rooms bathed in the sunlight that its wall-sized windows allow entry, and the interior chambers with no windows at all, the only glass that of cages.  And we know this fortress was designed to lock on both sides long before this is spelled out in the dialogue.

Truly arresting imagery is in no short supply in Ex Machina, besides the sublime technical achievement of Ava herself.  Sometimes the film overshoots, as in a dream montage that is nearly laughably earnest, but which admittedly fits the throwback pretensions well, unforgivably harsh natural lighting and all.  Of course, the moment that Ava becomes naked—you'll see—may stand as the most potent visual of 2015.

Ex Machina does have problems.  The film is for the most part a talk opera.  I'll repeat that, overall, that's a very good thing for it to be.  All three leads handle these discussions more or less well, but sadly the weak link isn't hard to identify. Vikander I've already mentioned, and Oscar Isaac once again proves his talent, investing the grace notes of his stock villain with so much care and fullness that Nathan, something of a mystery on the page, becomes a fully-formed character on the screen.

Domnhall Gleeson, however, is neither Alicia Vikander nor Oscar Isaac.  He tunnels into Caleb's awkwardness with all of his wiry strength, and often finds the truth of his character within it.  But routinely he also emerges with some of the most lifeless line reads you might ever hear outside of an Abed supercut, except Community is funny.  These are reads that should never have been uttered in the first place, but certainly never permitted to make it to the final cut.  In Gleeson's defense, at least one line, a threadbare recital from the Bhagavad-Gita by way of Robert Oppenheimer, obviously never should have been written at all.  It's just too much, even for a script this eager to state its themes. 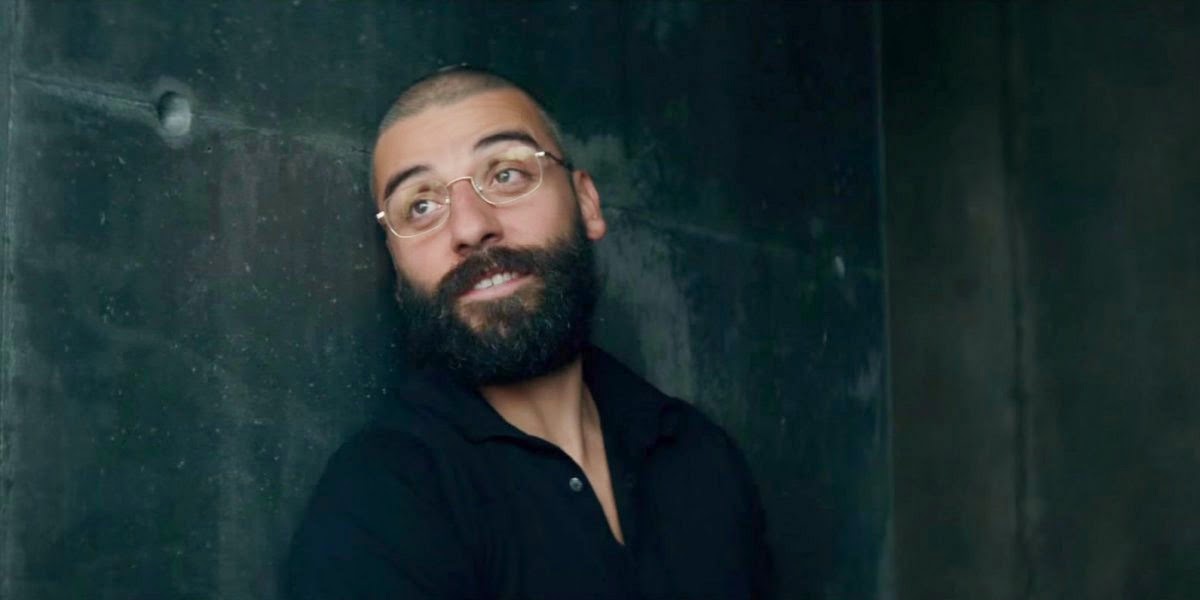 "Hi, I'm Nathan Hubris!  I think I'm God and I hate women.  Have twenty beers with me."

But I saved mentioning Ex Machina's moments of weakness till the end for a reason.  Although when they come, they're jarring, they're also practically meaningless in the sweep of the thing.  In more ways than I feel comfortable acknowledging, Ex Machina is a sister to last year's terrible, beloved Under the Skin—another throwback to the Laser Age, in all the worst ways.  Ex Machina does the same things that Skin (allegedly) does, but with so much more alacrity and grace that it makes me want to asphyxiate Jon Glazer in his sleep even more than I did before.  The difference is Garland's well-judged commitment to coherence.  He cycles through each genre he's tasked himself to execute, and rarely grinds his gears, piloting a lithe, powerful narrative that only gains momentum as it barrels through to its bleak, perfect conclusion.  No, Ex Machina doesn't pretend to be smart.  It is smart.  It is freed, therefore, to be profoundly entertaining too.