Putting the "list" in "miserablist!" (or, the films of David Fincher ranked, no. 1) 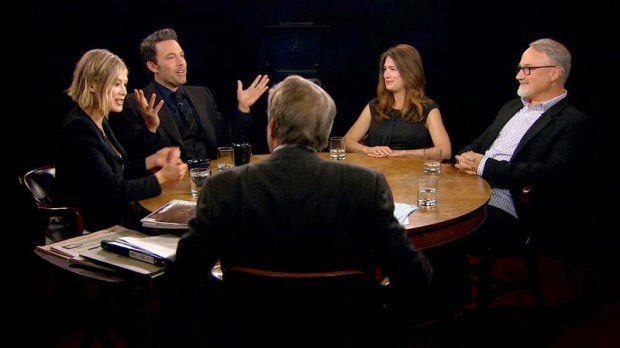 For going on twenty years now—my how time flies—David Fincher has been our preeminent auteur of gross, depressing tales of murder and mayhem.  Almost uniquely, Fincher has mastered a high-wire balancing act in the thriller genre, crafting films that are formally pristine, morally bracing, thematically insidious, emotionally devastating, and—most important of all—highly entertaining.  Though chiefly noted for this selfsame prediliction toward the pleasantly unpleasant, Fincher has tried his hand at other things, too—one time it was good, one time it was the worst thing ever.  On this episode: marriage. 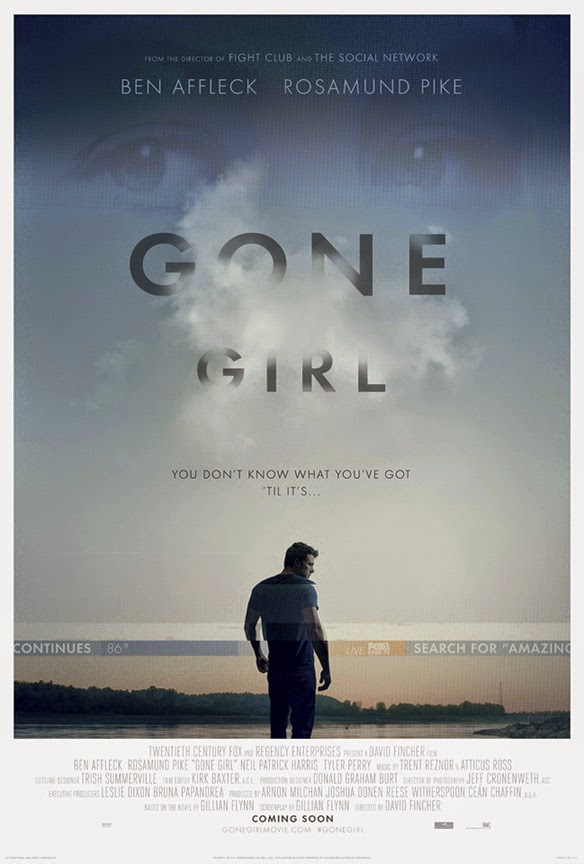 1.  GONE GIRL
Amy Dunne concocts the perfect plan to put the spice back in her marriage.  Meanwhile, her husband Nick is investigated for her murder.

"Let's define exactly where we stand here.  The only reason I can't call Gone Girl David Fincher's best film is because I have so far avoided seeing the movie where Brad Pitt is a cartoon, not unlike an Oscar-nominated sequel to Cool World."

Well, I saw that Brad Pitt cartoon, and I would've rather had that sequel to Cool World.  And Cool World is fucking terrible! But now I can call Gone Girl David Fincher's best film.  Funnily enough, the best film Fincher ever did is also very possibily the one that's the least his.  Yes, including Alien 3.

Behold: I have read a book!  Fincher's Gone Girl is something around 90-95% of Gillian Flynn's novel Gone Girl, transliterated via Flynn's own screenplay.  It's her voice that dominates over all others, including Fincher's, and at this point I could make a lame joke about how metatextually ideal this is, but I only bring up the notion in order to make sure you don't think that I somehow missed it.

Details here and there have been removed or fudged; some character observations have been sacrificed to pacing; minor characters have been excised or composited; the sense of economic apocalypse doesn't come through as overwhelmingly; and the epilogue is truncated (maybe not to the benefit of the film, but neither does it do harm).  The most systematic difference is probably that everybody in the movie is just a lot more attractive than they're described as in the book, with the (possible) exceptions of the Dunnes themselves.  Detective Boney, bluntly referred to as ugly, is played by Kim Dickens—and given the operation of Hollywood, I could probably say "is played by an actress" and make my point with both more brevity and more venom.  But why not a little facile praise instead?  Let's simply note that Kim Dickens is obviously quite far away from whatever Flynn must have had in mind.  Meanwhile, Andie—Nick's younger mistress—is hot in the book, in what amounts to a young girl-next-door sort of way.  Whereas in the film she is portrayed by Emily Ratajkowski, an actual model with lips the size and shape of two red couches stacked on top of one another and a body engineered in a genetics lab.  Her casting by Fincher arguably misses the larger point by failing to even recognize it as a point.  The other changes are more conscious and almost entirely to the good.  Some texture is regrettably lost—personally, I would have been happy with an even longer version, that would've made Fox executives shit their pants at the prospect of another underperforming endurance test like Zodiac, no matter how good it was—but it's quite remarkable how much of Flynn's vision remains exactly as it was and as it ought to be.

Now, Gone Girl may be Fincher executing Flynn with a faithfulness rarely seen in adaptations, but it remains true to his inimitable style.  The common denominator between all the changes made for the film is that each variation on the text made it more cinematic.  Take the film's signature moment.  This is the sudden shock of violence wrought upon crypto-rapist Desi Collings.  His throat is slashed in the very midst of his coerced coitus, and six months later I can repeat with authority what I claimed when I first reviewed the film: it is 2014's best kill.  (I'll add a new superlative: it's also that year's best use of editing—but it's a crushingly well-done sequence altogether, from the lighting that renders some of the realest, reddest arterial spray you'll ever see, to the minutia of the directing-acting conversation that added the detail of Amy flipping her perfect hair, successfully keeping the geyser of blood from staining it.)  By contrast, in the novel Amy drugs him, then bleeds him like a sedated pig—as is detailed via a transcript of a police interrogation.  Gone Girl the movie is not uniformly better than Gone Girl the book, but let's be absolutely clear: Gone Girl is far better experienced on your TV than it is on paper.

But!  We're here to praise Flynn, not nitpick her.  Gone Girl's got its hiccups.  I'm in no position to judge whether it's a masterpiece of prose or not—I can say it's the best novel I've read since Michel Houllebecq's The Possibility of an Island, but it is also the only novel I've read since Michel Houllebecq's disappointing, quasi-terrible The Map and the Territory.  What I am qualified to say is that it trucks with the ugly underside of heterosexuality in much the same humorously nihilistic vein as the Frenchman's oeuvre; except where Houllebecq's writing can be (uncharitably) summed up in that quotable quote of his, "Anything can happen in life, especially nothing," Flynn hangs her gender studies satire on a thriller plot of remarkable vitality.  Plus, one doesn't get the unpleasant impression that Flynn is writing herself as her mad protagonist.

(I mildly criticized Rosamund Pike in my original review—I want to take that back.  On multiple rewatches, Pike's Amy Dunne is perfect.  There doesn't have to be anything there when she drops that last mask—that's the point.  Amy is the ultimate behaviorist.  She doesn't have an inner life because it is not a thing she values in herself—let alone in anyone else. Flynn's treatment of relationships, and life, as a never-ending series of charades put on for others and ourselves is one of Gone Girl's more universal, more discomfiting claims.)

The subject matter matches Fincher's well-attested set of skills perfectly.  Possibly no director, living or dead, was better-situated to bring this novel to the screen.  All at once, it demands a recapitulation of his greatest efforts: the precise mystery pacing and the well-timed gore shocks of Seven; the bitterly sharp characterization and Rashoman conceits of The Social Network; the neo-Gothic horror undertones, the bifurcated storytelling, and the "yes, I do know that rape is a serious social problem" metatextual armor of The Girl With the Dragon Tattoo; and, finally, above all else, the cynical slapstick and the hateful, barely-sublimated black romantic comedy of Fight Club.  I've said before that Gone Girl is Fight Club's distaff equivalent.  (Rest assured, I only say Gone Girl takes after Fight Club due to the latter's chronological priority: as I'm sure you've learned your numbers by now, obviously I believe Gone Girl to be the better movie.  It is also a vastly, vastly better book.)  Gone Girl is the more playful of the two films—and even less easy to take at face value.  Like Tyler Durden, Flynn and Fincher's villainous deuteragonist pitches her petty complaints with revolutionary fervor and murderous intensity.  I would not have been entirely surprised had it turned out that Amy and Nick were the same person.

But nothing quite that preposterous is to be found here.  Indeed, Gone Girl remains Contemporary Fincher.  Fincher's formal fuckery has long-since subsided into his rigorous and pleasing neoclassicism, and nothing he's done since Fight Club can be said to be half as nightmarelike as that film, Seven, or Alien 3.  That means, despite isolated moments of counter-realistic style both subtle and awesomely obvious, Gone Girl is by-and-large staid, literalist filmmaking.  The better to stay out of Flynn's way, I believe: the story Fincher's aesthetic attempts to ground is anything but staid, let alone literalist.  Gone Girl is a grandly, guadily operatic rendition of every unreconstructed male fear (and, maybe, some transitory female fantasies), a nervy parade of misogyny and misandry from all sides that outright dares you to agree with anything that it's making fun of.

It's as gendered a tale as they come—the premise itself only functions because of our society's perverse gender duality.  (Imagine the same perfect murder plot, with broadly similar motivations, except it's the husband out to put an unfaithful wife on the lethal injection table.  It's a lot less fun now, isn't it?)

Amy's famed "Cool Girl" monologue speaks of a truth, but it's banal truth, a truth that resonates with us solely because we hate that it is true: life is the constant, losing struggle to remain appealing and interesting to those we want; put more succintly, as the book does, that there is no such thing as unconditional love.  The multifarious forms our failures take may vary by sex and the individual, but the inevitability of failure remains true for everybody alive.  Amy rages not against society, really, and only tangentially against her collapsing marriage.  Her target is the moral and physical frailty of the human organism itself.  Hers is a cosmic anger.  Therefore it is useless and wasted, misdirected and misused.  The rest of us accept that failure is our ultimate fate--even if somehow nothing else bad happens, we'll die.  The rest of us accept that some degree of failure must be embraced.  Amazing Amy doesn't, and Amy can and must be dismissed as crazy.  But we can see the tiniest fraction of ourselves in Amy nonetheless.  The sane person must be pragmatic to be happy—but it is impossible for any person who's lived long enough to fail to wonder why we seem designed instead for misery, and despise that there is no reason.

So: David Fincher's best movie is his smartest, his funniest, and his most surprising.  His avowed dissatisfaction with Vertigo gratifies me immensely; the handling of Gone Girl's similar mid-film twist is so much better as to make one shriek with delight.  In the end, Fincher and Flynn don't take their cues from Hitchcock but Sartre, and Gone Girl lays a claim to being the No Exit of our time.

Thus Fincher's best is also, maybe, his most unpleasant; at least, his most subtly unpleasant.  Upon reflection, it might really be America's favorite nihilist's very bleakest film.  Compare it to Seven, the other contender.  There, the meaninglessness of life drips off of every cartoonishly diseased frame; but the determined amorality that Gone Girl wallows in is only less direct, rather than less soul-numbingly pervasive.

Maybe it's his easiest, too: Gillian Flynn did all the hard work already.  But since I presume that Gillian Flynn could never have made this wonderful movie without him—hey, let's call it square.

Email ThisBlogThis!Share to TwitterShare to FacebookShare to Pinterest
Labels: 10/10, 2014, comedy, David Fincher, sex is terrifying, thriller, Transparent allegory, true artists are still just pieces of meat like you or I