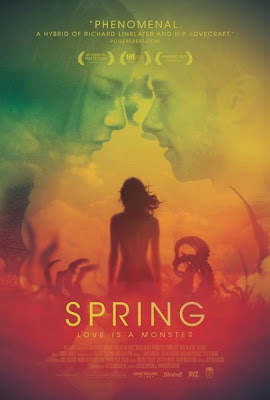 Spring is the last straggler in the clutch of horror movies that made their way around the 2014 festival circuit and managed to pick up a noticeable degree of critical heat.  It arrives in something of a three-pack, then, with the other two causes celebre of the contemporary horror scene, The Babadook and It Follows.  It turns out that it has no right to be mentioned alongside either one.  Indeed, it doesn't deserve to be compared to them in the first place.  That's not only because Spring doesn't approach their level of quality—although it is certainly in no way a reliably good movie, as it fails in every way it could when it counts the most—but because Spring refuses to be an actual participant in the horror genre at all, except in the most facile of ways.

With the utmost generosity, perhaps you could call it horror-comedy, but only on the strength of a couple of scenes at most, maybe even only on a single (brilliant) line.  Its hero, confronted with evidence he doesn't understand, takes on the role of audience surrogate, demanding to know where the creature he's discovered fits into his reductive pantheon of pop culture monsters—werewolf, vampire, zombie, or alien?  (The answer is "none of the above.")  But I assure you that there remains more legitimate horror in playing with Ghostbusters action figures, whereas Spring gives up on even its parody of horror in very nearly the same breath that it starts.

What it is, really, is a passable romanctic comedy, merged with a science fiction conceit that writer-director Justin Benson and his co-director Aaron Moorhead use as a weapon to mortally wound their own film.  The horror elements that persist amount to little more than an inconsistently looming shot design, and the (runtime-padding) inclusion of "disturbing" imagery that does occasionally manage to be kind of gross, but which always remains perfectly morally neutral.

Nope, the only thing horrifying about Spring is its protagonist's obscene sense of entitlement.  In this romance's second, terrible phase, he evinces a blind, wheezing need to destroy everything special and wonderful about his beloved, which might be interesting, except the film thinks this is true love, too.  Thus it twists and bends and ultimately breaks itself in a pathetic attempt to convince you that it is.  The half-sourced pullquote on the poster fetes Spring as a "hybrid of Richard Linklater and H.P. Lovecraft," and that's accurate enough.  It combines Lovecraft's warm humanism with Linklater's mastery of terror.

Meet Evan, a 20-something with no direction, but only by circumstance: Evan's been brought home from college by his father's untimely death and his lonely mother's subsequent contraction of cancer.  By the third minute, his mother has passed as well, and he deals with his anger and grief poorly enough that by the twentieth minute, he's decided it best to leave the country for a while.  In one of those moments in the first phase of the film that's cognizably funny, a travel agent suggests, "Well, white people love Italy."

Soon after arriving, he meets Louise.  She's a gorgeous biologist with two differently-colored eyes, something X-Men and James McAvoy fans know as heterochromia, a dominant hereditary trait (remember that).  She knows English, Italian, French, Latin and Greek (remember that too).  She offers him casual sex; but he demurs, countering with the offer of an actual date.  Against her better judgment, Louise succumbs to his charms, although these seem to amount mostly to being an American who isn't brutally ugly.  What Evan doesn't know is that she has a ghastly secret, but soon he will.  Thereupon the movie changes.  Not into a horror film; only a bad one.

The film's central dynamic has heretofore presented as a pleasant diversion.  Lou Taylor Pucci has been on my radar since 2013's Evil Dead, and he's almost embarrassingly willing to push Evan's terrible clinginess, crafting a character that feels real even when other characters' reactions to him don't.  Meanwhile, I've never heard of Nadia Hilker, but she plays Louise's weirdness with a matter-of-factness that suits her story well.  When she stumbles, she can't be blamed; no actor could do much with what this script becomes.  Their meets-cute are not the stuff of timeless legend, but their chemistry works, and up until everything collapses, Spring floats along on their efforts.

Meanwhile, until then, its horror trappings remain tantalizing, for it has not yet resolved to defy its own chosen genre.  And Spring is fitfully good-looking, too: it's constructed out of a sort of formless faux cinema verite that's only sometimes as ugly as handheld digital video can be, punctuated by very deliberately composed shots, and—even more to my taste—ribboned with long-take walk-and-talks.

However, it's hard to say the filmmaking is even routinely well-deployed: the conversation that follows the revelation of Louise's nature is captured by one of these erratically mobile long takes.  Form matches function, visually signalling Evan's own confusion and discomfort, but it spells death for Louise's vital exposition.  After all, writer Justin Benson is creating, more or less, a brand-new movie monster.  The rules that govern her are shockingly complex—literally unbelievably complex, in fact—and they practically demand that everyone involved—please!—sit the fuck still for a minute, so she can talk.  But, hey, this movie doesn't like to listen to women, anyway.  (And when it does, it tells them they're wrong.)

Clearly, Spring is attempting to be a metaphor about certain markers of adulthood—love, family—and how they seem like the end of one life and the beginning of another.  This actually makes it worse.  I'm almost tempted to give it points for the novelty of being a fantasy, almost purely romantic rather than the customary pornographic kind, centering totally around the emotional needs of a man; but I don't think anyone needed a reminder that dudes can be weepy little crybabies too.

So, let's get a load of Louise!  Spring is one of those movies that saves its worst for last.  Get out now if you need to.  But heed me: this thing sucks the eighth tentacle.  You know the one I'm talking about.

Here's the deal: We've already seen Louise transmute into something potentially horrifying (that's because Benson and Moorhead decide to leave Evan's perspective, after spending more than forty minutes anchored to him).  What we ultimately learn is a lot more idiosyncratic than we might have imagined, however.  She's not turning into a werewolf or vampire or zombie, though the iconography of all three show up during her transformations.  I personally managed to get slightly ahead of some of the details, because I've seen W.C. Menzies' 1953 sci-fi horror misfire, The Maze (why, I even reviewed it), although The Maze, with its gonzo showmanship and genuine horror atmosphere (and shorter runtime), manages to be a better brand of bad.  Louise, like the Baronet Craven, is thrown back down the evolutionary ladder, and she likewise has been conceived by a willful dunce who doesn't know a Goddamned thing about evolutionary history.

She's like an illustrated encyclopedia of all the animals we're not related to.

This isn't even the sticky part.  Louise is not merely subject to weird fits of hypertrophically recapitulating the tree of life within her own body.  She's an immortal who has been with us since Roman times.  Her body is capable of generating totipotent stem cells that rejuvenate her, which is what causes her biologically implausible freakouts.

Altogether, it's a heap of delightfully stupid cardboard science that Benson doesn't come close to having even an educated layman's grasp upon, but the really insane part is that the rejuvenation arrives only when she's properly inseminated by a man.  And the kick is that she gestates, in utero, each new iteration of herself.  When she gives birth, seven days later (!), she ages quickly toward adulthood and lives her immortal life twenty years at a time, till the cycle begins anew.  Wouldn't you know, Evan has gotten her pregnant, and she has difficulty controlling the transformations that ensue upon pregnancy.  (The stem cells she steals from her lab and injects into herself as a form of palliation only help a little.)  (P.S.: don't bother trying to guess how she treated her body's changes before the mid-1990s.)

This is where the "horror" allegedly enters the picture, though unless you're somehow fooled by its cloying staging, almost none of it is scary.  Her self-pregnancy, of course, is a thoroughly understood part of her existence; it's about as horrific as a period.  Sometimes, we see her consuming—gasp—animal meat.  (The filmmaking tries, with ludicrous desperation, to make her intermittent carnivorism seem shocking.)  Now, she may also have eaten a little girl—but this is a deep-backgrounded allusion and the leads don't even give a shit.  The "worst" single thing she does is kill another American tourist, whose existence underlines everything lazy and timid about Benson's screenplay, since the frat brah is clearly Everything Terrible in the World all in one person.  Of course, the only human Louise definitely kills must be the guy trying to rape her, thereby disarming even the tiny sense of danger that Spring had previously possessed.  (There are also parts where the filmmakers completely forget that they have established, through copious dialogue, that Louise's monsterdom is scientifically explicable, like in the scene where Evan snaps a photo of her that turns distorted, in a bizarrely meaningless riff on The Ring.)

Louise has one weakness, however, and that is feelings of love (as mediated by oxytocin, or so she says, though I trust nothing in this film that has to be related in more than three syllables).  In the case of true romantic love, she will simply carry a child to term in the normal manner... and experience the true death.  This, at least, was the lesson her mother taught her when she died.

Spring's naivete about sex and romance is probably best summed up by its ignorance of what even happens when heterosexuals fuck: the XX/XY reproductive scheme makes it effectively impossible that she's flipped that coin a hundred times and never gotten tails—and thus reborn without the female machinery she needs to continue her immortal cycle.  But let's forgive this, shall we?  Justin Benson obviously has never had sex ed.  Indeed, he might actually be a virgin, since even late-bloomers like me realized before I hit my 20s that the unsexiest thing in the whole wide world is whining.

You see, what Evan does in the last third of Spring is wheedle, cajole, and outright beg Louise to consent to die, because in his six days with her, going on seven, he has decided he loves her, though little in this film resembles "love" as anybody should recognize it.

There were infinitely many other ways the last half hour of Spring could have gone: it could have been a bittersweet romance about giving up the one you love for their own good; it could have been a sweet-sweet romance where she returns to him by her own agency (without him henpecking her into giving up eternal life), turning it into a far less offensive movie about the unavoidability of our feelings; it could have skipped forward into the future and engaged directly with the weird-as-fuck Cronenbergism of its central conceit; or, finally, with thirty seconds left on the clock, it could have retrenched suddenly and satisfyingly into hardcore horror at the end.  It does none of these things.  It sticks to its awful, awful guns, all the way through.  It is frankly despicable.
Posted by Hunter Allen at 9:27 AM