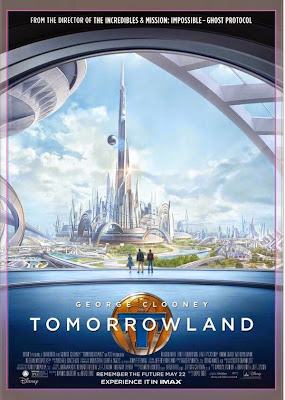 To begin with, Tomorrowland is impressively structurally broken.  Following hard upon the title card, George Clooney appears to directly address the audience.  One could surely do worse than Clooney; and some of the best movies ever made are framed as a main character's narration.  However, most of them do not interrupt him 30 seconds later so he can engage in a spat with another main character—who, in this case, does not even show her face on the screen until what seems like the 20 minute mark.

Clooney is Frank Walker; after silencing the objections of his disembodied co-lead, he recounts the story of a childhood adventure to the 1964 World's Fair.  In attendance is David Nix, a scientist-industrialist who's always looking for new technologies; Frank's come to show him the perfectly safe homemade jetpack he built in his garage out of spare parts.  Nix, recognizing immediately that this kid is a liability issue at best, barely gives him the time of day; but his young ward Athena sees something worthwhile in Frank's wide-eyed optimism.  Thus she gives him a small commemorative pin that doubles as the key to a door in space and time.  When Frank goes through, he finds himself in a city of the 21st century as imagined in the middle of the 20th, raised up in the middle of a wheat field on an alternate Earth.  This is Tomorrowland, populated by a secret society of scientists who have escaped our world in a bid to create the STEM utopia, freed from all the impositions of our crass society, like commercialism, the poor, and guardrails.  It is a gorgeous and inviting world they've made nonetheless, rendered in that bright white brand of Walt Disney techno-optimism (yet as cosmopolitan as EPCOT Center itself).  But Nix is its leader, and if you haven't recognized that he's going to be the villain, then obviously you aren't Tomorrowland material.  Frank, however, seems to have finally curried the great man's favor.  At least, that little annoyed huff Hugh Laurie makes when Frank completes his demonstration of the jetpack must translate as "welcome aboard," for Frank comes to live in Tomorrowland, until, as he puts it, "everything [goes] to hell."

This screenplay loves the word "hell," because it's PG but still a reasonably effective swear.  I approve.

The foregoing block paragraph will have to double as half the synopsis, but let's get back to why none of it should have been in the movie in this form at all, let alone serving as its very prologue.  First: even though Frank is the one with an arc and an inherently interesting story, he's neither Tomorrowland's hero nor is he the audience's gateway to its world.  That role goes to Casey Newton, the teenaged girl played by the shortest 25 year old they could find—and probably not named after the fig snack, given how humiliatingly eager the film is to senselessly namedrop famous smart people.  The discovery of Tomorrowland should have belonged to her; yet we experience it with Frank.  Thus, when Casey finds her own pin, we've already gotten way, way ahead of her.

Second: when one narrator tells us a story that's already happened to him, it can still offer a sense of mystery.  When you decide it's necessary to have two—out of a whole main cast of three—it's tantamount to outlining the details.  So have fun, if you're over the age of "born," knowing the broad shape of how Tomorrowland will end—that is, with a profound sense of obligation, the emotion of its beautifully-functional climactic beat having been expertly defused two hours earlier, in case your limbic system may have found it all too taxing to process.  Tomorrowland retains a few secrets beyond its prologue, but the ones that it hasn't revealed by the end of it are all tactical twists, rather than intensely-felt surprises—and even these minor points are foreshadowed with a literal kick to the face.

Third: Casey and Frank's backbiting—no doubt conceived as cute—is instead insanely fucking annoying.  So naturally it pops up to derail the film again—more unforgivably the next time, because by that point the story has already, finally made some actual progress.

To its credit, Tomorrowland never gets worse than its miserable opening gambit.  Once storytelling duties and the protagonist's halo alike are fully transferred to Casey, it even begins to incrementally build momentum.  Casey's the genius daughter of a soon-to-be-laid-off NASA engineer, who's been Wargaming around Cape Canaveral committing treason—that is, sabotaging construction equipment—to delay the inevitable decommissioning of the launch site and, with it, her dad's job.  This brings her to the attention of a shadowy figure that is soon resolved into Athena, aged not a day since 1964 (quel mystere!).  Athena manipulates Casey into coming into possession of the pin (because it would preempt too much of the first act's questing, had she simply handed it to her).  Still, they're united soon enough, and they seek out Frank, who's spent the intervening decades exiled from Tomorrowland.  Ultimately all three team up, determined to return to Tomorrowland and restore its can-do spirit.  The stakes get much larger than that, though they are never explained, in a deliberate move that is both fittingly allegorical and very obnoxious.

Tomorrowland functions best on its shallowest levels, when it's a decent kids' adventure revolving around the whizbang super-science of the past.  Bird directs with something like a sense of awe without sacrifcing fun.  The always-reliable, sometimes-amazing Michael Giacchino is on hand to layer some heavy Jerry Goldsmith onto the score, sometimes even enough to trick you into thinking you might be watching something as cool as, say, Explorers.  As for the cast, Britt Robertson puts enough personality into her off-the-rack Chosen One role that she's credible as a protagonist (though given she's an adult actor, it's the least she could do).  Once Clooney reenters the narrative, he's surprisingly committed, redeeming the unpleasant half-banter of his opening address through the simple expedient of being a total asshole, which better suits the dynamic.  This is the case particularly in terms of his connection to Raffey Cassidy's Athena, which would be inordinately weird if they dwelled on it any longer than they do, but as it stands, it works, and Cassidy steals the whole show, giving the film's best performance in by far its most challenging and interesting role.

Yet, despite a boggling 130-minute runtime Tomorrowland barely mines its rich veins of zeerust for anything that's too fascinating in itself.  Almost all of the high technology Nix has hidden away boils down to nothing more than different ways to get into Tomorrowland—one of them being actively terrible and also stupid.  And anyway, Tomorrowland itself, while attractive, is barely novel on its surface and unexplored in its substance.  It's a thoroughly undistinguished locale, except in terms of its VFX budget, though I defy anyone, including Disney's accountants, to tell me where that $200 million actually went.  It looks like a slightly better-heeled version of all those boring United Federation of Planets-style metropoles we've already seen a thousand times in a thousand other science fiction movies—unsurprising, since designer Scott Chambliss, of the new Star Trek and its sequel, could probably do that in his sleep by now.  There's one big difference, though: those other thousand movies usually had somewhere else left to go.

That said, the villain does at least have some truly wonderful killer robots.  These audio-animatronic servitors manage to nicely subvert all the corporate commercial elements of Tomorrowland.  All of them smile that rictus Disney smile—whilst they brutally vaporize enough innocent people that I lost count, and with as little empathy as any Terminator.  Tomorrowland is just superbly violent for a movie rated PG.  (The robots themselves, established as at least mildly sapient, are subjected to rather shocking punishments by the heroes, too.  Now, it's not quite Westworld, but it's in the same theme park.)

I also approve of this.

Tomorrowland is, of course, a Brad Bird Movie.  It's at once the most successful Brad Bird Movie—that is, his most blatant—and his least—see above.  Ever since The Incredibles, Bird's basic theme has been the obeisance we owe our betters, whether they be aging superheroes or plague-ridden chefs.  Above and beyond the ordinary hero worship inherent to all conventional adventure storytelling, Bird's work is often accused of rank Objectivism.  There's some merit to the claim, but Tomorrowland reveals—if it wasn't already evident—that he's of an older school than that.

See, Tomorrowland might be the first film in 78 years to openly advocate the same brand of technocratic statism based on leadership by the smart which H.G. Wells developed as a personalized strain of socialism in his prose and in his one screenplay, Things to Come.  It's actually rather appealing, and this is how Tomorrowland comes to decry our contemporary fascination with dystopian fiction (and dystopian fact), waging a war against Millennial malaise and arguing, pretty forcefully, that our recognition that we're living in the End Times is a self-fulfilling prophecy.  But it's also how Tomorrowland comes to forward its case, in rather compelling terms, through the mouth of its villain.

Tomorrowland is often incoherent in this manner, however, thanks in large part to Bird's heedless nostalgia for the technological journeys we gave up on, usually for good reason.  Take its specific exhortation that we owe our Trekkie overlords trillions of dollars to fly shuttles around in the void surrounding our planet for kicks, whilst our fundamental (but boring) terrestrial infrastructure crumbles around us.  The old man smell is most keenly sensed in one ugly, sermonizing scene, when a curious crowd gets their smartphones blasted with an electromagnetic pulse, evidently because Brad Bird really, really feels that people need to experience life firsthand, but, obviously, they should be prohibited from capturing their memories in a recorded medium, let alone doing something really disgusting, like sharing their experiences with anyone else.

Tomorrowland, meanwhile, at least reframes the question ordinarily posed by Brad Bird's body of work—asking not only what we owe our betters, but what they owe us.  It pursues this question pretty hard, in fact, before forgetting it ever uttered it.  In the end, it stumbles into its closing credits with a sequence that underlines, seemingly entirely by accident, how very little—or, perhaps, how much—our heroes have learned from their villain.