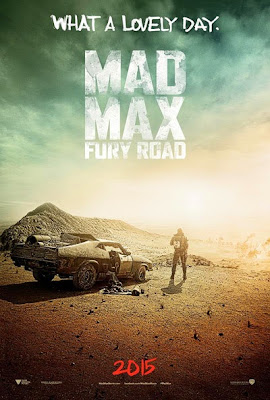 Mad Max: Fury Road is the story of a chase.  It begins in the Citadel of the Immortan Joe, the god-king of his corner of the wasteland by virtue of his hydraulic engineering prowess.  He rules also the neighboring settlements of Gastown and the Bullet Farm, their military power made vassals to Joe's agriculture.  And he commands the loyalty of the War Boys, a death cult comprised of radiation-stricken "Half-Lives," powdered pale and whose greatest wish is to die for the glory of Joe and walk with him in Valhalla.

Joe's most prized possession is a harem of beautiful female slaves, some of the last fertile women in the world—and now they're gone.  Fury Road begins in earnest when we discover that the ablest imperator in his army, Furiosa, has freed them from Joe's sex vault.

Meanwhile, our favorite half-insane survivalist, Max Rockatansky, has found himself enslaved as well—run down by the War Boys, first chained and then bled of his delicious universal donor blood, in order to keep his Half-Life master Nux hale, hearty, and ready for battle.  To this end, he's lashed to the hood of Nux' V8 war machine and blasted across the desert at 100mph in pursuit of Furiosa.  You know what happens next, and it does.

Despite predictability, Fury Road is one fascinating beast.  It's a distant sequel that feels as much of a piece with its predecessors as any such effort has ever done.  At the same time, it reimagines its source material as deliberately and thoroughly as any avowed remake—and more successfully than just about any have heretofore done.

Of course, it's not the first time that this franchise has taken a new direction, and this helps Fury Road feel like it belongs with the other three.  In particular, the events that must have taken place within the ellipsis between Mad Max and its sequel reoriented the series decisively.  Road Warrior replaced a tottering society with no society, and it moved Max from the decaying suburbs of New South Wales a few years from now to the dieways of the Outback years after the pox-eclipse has already occurred.  And let's not forget that Beyond Thunderdome closed with the promise of a renaissance.  In Fury Road, of course, Max' co-protagonist is a 40 year old woman (or at least played by one), born at some indeterminate point after the end of the world had already happened—placing Max himself at, give or take, a sprightly 65.

It's that paleo diet, I guess.

Fun with timelines and plausibility has always been more of a feature than a bug in this series, so take none of the foregoing as senseless bitching.  George Miller has explained his stories as the myths that sprang up around the exploits of a vaunted hero.  Both the previous sequels frame their stories explicitly as tall tales, recounted by alleged witnesses long after the fact.

But the distinction is more than Tom Hardy's skin deep.  It's in every detail.  It's in the absence of any narrator but the title character himself, contrasted by the presence of subjective phatasmagoria which aims to fathom the madness of Max.  It's in his brief, oblique, confusing memory of an unseen female voice who calls Max "papa," when the only child we know Max had was a pre-verbal infant son.  It's in the enthusiastic embrace of the tropes of a radiological apocalypse, after three films with only sparing references to any atomic horror afflicting Australia specifically.  It's in the literal richness of its gorgeously overwrought production and costume design, design which will win Colin Gibson and Jenny Beavan Oscars next year if there's any justice left in the Academy, but distinguished easily from the found-object, sex-shop gift-card aesthetic of the original trilogy.  It's in the sparing, but bracing, CGI.  It's in the relocation of the film's production, from the place it represents to Namibia.  And—good grief—is it ever in John Seale's technically amazing cinematography, color-manipulated and beautified to within an inch of its life, not only looking nothing like Dean Semler's gritty, iconic treatment of Broken Hill, but so overdetermined and fake that the tantalizing reality of drool-inducing vehicle stunts is, itself, actually compromised.

Finally, it's in the gonzo tone and in the deep-driven themes, that go beyond the slightly-more-nuanced realpolitik of its two predecessors for a shot at the truly elemental, reframing the post-apocalypse as a cosmic struggle.  Fury Road tells of a war not between humans who still cling to morality and humans who have abandoned it, but between humans—period—and the primordial rape-monster and his army of zombie soldiers.

To put it as succinctly as possible, Road Warrior was punk, but Fury Road is metal.

(Fury Road is so metal indeed that what would be a flourish anywhere else becomes a wasted opportunity here.  The villain's guitarist—the villain has a guitarist—reappears time and again in cockteasing cutaways, each time to diminishing returns.  He gets his moment, but one defined by the action surrounding him, foreclosing at last the prospect of the headbanging musical number his mere existence demands.  The stings of his guitar aren't even permitted to maintain a persistent presence in the soundscape.  The score that Fury Road has, by multigenre artist (and metal producer) Junkie XL, is instead an urgent march to match the action—absolutely, perfectly great in any given five minute stretch, while becoming repetitive in the actual 120 minutes of the film, if never quite enough to bore.)

I dare you to compare it to Mad Max Beyond Adult Contemporary, which let Bartertown's local-color saxophonist breathe a little.

The series formula remains structurally intact: Fury Road still plays much the same tune as Road Warrior and Thunderdome, with Max once again tested in his commitment to the sociopathy he's adopted to deal with the loss of his family, his world, and his mind.  But even here there's a difference.  It's only partly inherent to Tom Hardy filling Mel Gibson's boots.  We love Tom Hardy for his non-intuitive choices, though by their nature those choices don't always work.  I'm not quite certain what he's doing here—his appropriately few lines are like a quilt made of Mel Gibson's most implosive moments, with inadequate connective stitching—but he's functional, at least.

It's not at all due to being crowded out by his co-lead, for Furiosa is at least as interesting as Max, and Charlize Theron is objectively better with her new character than Hardy is at recapitulating an arc already once performed to perfection.

The difference is again tonal.  As he did twice before, the Raggedy Man comes sideways into an ongoing conflict that has nothing to do with him, but where Gibson and Miller's treatment of Max always saw him operating almost outside his own stories, alienated from barbarism and civilization alike, in Fury Road Max dovetails cleanly into a group of renegades who all walk the same line he does.

In two essential regards, however, Fury Road does exactly what its predecessors did so well, but even better:  the showing-and-rarely-telling of Miller's future history, now finally rivaling Star Wars in the density of its imagination, and the immaculate creation of a sharply-defined cast of characters through absolutely nothing but grace notes.  (Hell, there's so much character work done just in the recital of all of their wonderfully absurd names.)  Miller stumbles only a little with Nux (Nicholas Hoult stumbles not at all), who must be moved impossibly rapidly through an arc that takes him from anonymous henchman to active agent over the course of the film.  But there are characters who don't show up till the final minutes who still feel as hyperreal as the one we've known for three decades.  Perhaps best and most surprisingly of all, Miller manages to distinguish Joe's slave brides from one another, making them more than maguffins and giving them each moments to shine—something most films wouldn't even bother with.

Though for a movie that is so forthrightly feminist that Miller retained Eve "Vagina Monologues" Ensler as a consultant, I'm curious why and how their makeup stays so perfect.

Fury Road is both the culmination of the vision George Miller had a decade and a half ago for Max' fourth apocalyptic adventure, and a vision so altogether distinct that it would be easy to believe that it was a reboot overseen by someone else—but, crucially, someone who loved and understood every moment of the first three, so that he knew when to break its rules.  That might be one of Fury Road's greatest strengths: you can walk in cold, with no education and nothing but distaste for the starmaking vehicles of their rightfully-gulaged leading man, and still love it.

And yet: I alluded to problems in its departure from its forebears, muting my appreciation for what Fury Road does right.  The problems are not the story, nor the characters—surely not the tone.  They manifest in the action itself—the beating heart of franchise.  They are rooted deeply in the new style Miller has adopted for a 21st century entry into a series that I reckon is meant to take place in an alternate 1990s.

What the cinematography doesn't succeed in dehumanizing, the editing often amputates a fraction of a second too quickly for the spectacle to make its full impact.  Computer-generated effects remain present enough that the true shades into the false, and sometimes you cannot be sure which is which; thus, what would be an inestimable strength in any other movie works against Miller's vast ambitions here.  This combination of cinematography, cutting, and CGI, no matter how pleasing to the eye, bleeds some of the danger from the stuntwork before it all reaches the reptile brain.  I know, intellectually, that many of the stunts are real and potentially lethal; sometimes they don't feel that way.  Instead, I feel like the asshole who won't join the chorus singing Fury Road's highest praises.  (There's one action sequence alone that could not be improved on at all—it's a fight that takes place not atop a moving car, but upon solid ground.)

Yet before you froth, know that I'm not soulless—every negative I've listed comes from my irrational hope for perfection, stoked into a blazing fire by the hype machine, then dashed (and only slightly) by the actual experience.  There is still genuine awe to witnessing Fury Road.  Despite editing too hair-trigger for its own good, there remains geography and coherence to be appreciated like manna from heaven.  It is, by some significant margin, the greatest chase film since Death Proof (though its thrills hardly trump those of the greatest chase film of all time).  The Namib Desert—though clearly 5000 miles from the Outback—nevertheless provides an ideal backdrop for Fury Road's own idiosyncratic brand of hyperkineticism.  It offers real-life minimalism, rarely anything more than a horizon line separating the orange from the teal.  The compositions recall the focused action of a comic book fight—and more directly than even any actual comic book movie has heretofore done.  Of course, the pure tactical inventiveness of Fury Road's action—realized by the series' most abominable funnycars—can't be denied by anybody with eyes.  Joe's army, designed around car-to-car combat, makes the Humungus' band of savages look like amateurs.  There's even a scene that counters everything I ever said about the signal failure of the original Mad Max; Fury Road provides a compelling reason why anyone in a multi-ton vehicle should ever worry about bandits on motorcycles.

So, I'll close this schizophrenic essay by repeating: Fury Road is a great film.  But come on, it's not the greatest film.

Maybe I should watch it again, right now.

Just to be sure.