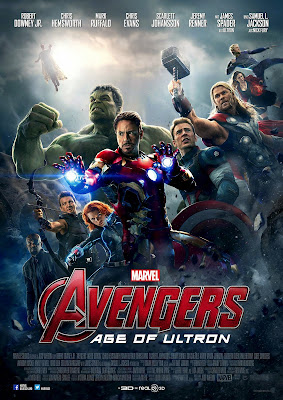 The Marvel Cinematic Universe continues to roll forward, picking up all sort of lint and hairs along the way.  Film critic tradition dictates that I relate my brittle hurt feelings toward the ongoing superheroization of action movies, a process that has resulted in the unacceptable situation of three or sometimes even four whole movies released in the subgenre each year.  I'll conclude my plaintive essay with a whine about the lack of stories for adults, ignoring the superhero masterpieces as well as the large fraction of American cinema's output that still caters to a so-called "mature" audience.  Then I shall button the thing with a snide comment—"Sony, something something, Amazing Spider-Man 2, something something, the end is nigh!"—while nonetheless giving Avengers 2 a pass despite embodying many of that film's problems and demonstrating few of its strengths.

Truth be told, I'm largely pleased with the state of superheroes on film.  Overall, the future looks bright: that Superman sequel is shaping up (although I'm keeping my expectations grounded this time), Ant-Man looks like enormous fun (despite the directorial imbroglio), and there's even insane talk of a Valiant cinematic universe (unfortunately, there's no word yet on a film adaptation of Magnus Robot Fighter, but if all you have to offer is Ultron stories, I raise you Steel Nation, and I automatically win).  The only major sour note is, in fact, the collapse of Sony's pretensions toward a self-contained Spider-universe.  (Yes, I know I mourn alone.)

And yet: I can't help but wish that Marvel's movies, the mega-franchise that started this whole thing seven years ago with Iron Man, would be generally better.  Instead, when Marvel movies are great, it seems to be half-accidental.  The studio offers revelatory bread and circuses one season and follows them up with gruel and homework the next.  In the case of Marvel's second Avengers film, it offers both, within its own 141 minute runtime.  This was likewise true of its forerunner, but there's over a billion reasons for nobody to have learned any lessons from The Avengers' rather severe third-act problems.  On the basis of Avengers: Age of Ultron, they clearly didn't.  Indeed, those problems have now spread to the whole feature.

Avengers 2 begins with the team reunited, on another mission to uproot a HYDRA base in the wake of the revelations from Captain America: Winter Soldier.  In a long take that is either suitably thrilling or clumsy and reminiscent of a first-person shooter, depending upon your temperament, we are reintroduced to Iron Man, Cap, Thor, Black Widow, and the Hulk, as well as the team member voted most likely to be hilariously superfluous, Hawkeye.  On the plus side, at least Clint Barton doesn't have to play "friend good!" with the Hulk at the end of every mission, which seems to be Widow's primary function.  (That subplot leads into one of the most shoehorned-in movie flirtations in recent memory, made palatable only by the fact that one of the participants is portrayed by an irresistable sexpot.  I refer, of course, to Mark Ruffalo.)

Things go a little wrong with the advent of HYDRA's superhuman twins, Pietro Maximoff (not called "Quicksilver" for some reason) and Wanda Maximoff ("Scarlet Witch," and likewise), but—fortunately—only Hawkeye gets hurt.  As this was totally inevitable, it should concern no one, and indeed it barely does.

More importantly, the Avengers recover Loki's mind-controlling scepter.  Tony Stark claims the artifact in the name of Science and promptly uses it to create a world-protecting, warbot-controlling AI he calls Ultron, since apparently that's what the scepter actually is.  An AI.  Um, fine.  (Tony goes down this path because he is unaware that he lives in a comic book-inspired universe, where this kind of shit never goes well.)  Ultron, upon achieving consciousness, is immediately disgusted with the mess human beings have made, and elects to implement his creator's wish for peace by way of a robodictatorship and, ultimately, genocide.

It's the most innovative plot ever written.  Thanks, Joss Whedon!

So far, then, so good—except for the part where, as in so many other franchises, Everything Is a Thing.  This is how Ultron comes to be based on alien technology that ties in with not only Asgard but surprise! Thanos.  Despite a superb Crudupesque performance (delivered by a quasi-surprise actor), I don't even want to get into the whole bit with the Vision, partly out of fear of spoilers but mostly out of fatigue that literally every event that occurs within these movies now has to relate, directly, to something that we know will happen later—and in ways that simply do not, if you'll pardon my fleshist bigotry, feel at all organic.

If there's one fundamental problem with Avengers 2, it's that; but if there's two, it's that Avengers 2 is, or should have been, Iron Man 4.  It's a story about Tony Stark fatally overreaching (again) and being slapped down (again), which is what you want to see out of any Iron Man story (with bonus points awarded if he starts drinking again and pisses the armor).  James Spader, awarded the role of Ultron based on his depiction of a robot programmed for BDSM in Secretary, is suitably creepy and brings life and authenticity to the AI's weirdly chummy, Stark-copyrighted attitude: the performance is great, but the character somewhat less so, let down as he is amidst the copy-and-paste supervillainy that sadly defines his "arc," with the few hints of something more behind his actions than plot-driven antagonism turning out to be more frustrating than fascinating.

Naturally, the movie that actually exists is beholden instead to be about many other things in addition to Tony Stark, his Frankensteinian monster, and his monster's monster.  (It's a multigenerational epic!  And with no Hank Pym or Janet Van Dyne in sight.)  Thus one sits there, mildly entertained, by the Avengers' globe-trotting quest, the destruction of Ultron's robot servitors, and Whedon's willingness to engage with very interesting ideas for twenty, even thirty seconds at a time before moving on to something else—interesting ideas like the infilitration of the whole Internet by Ultron, something that almost demands either some kind of accommodation with the flawed AI, or at least a clever sideways sort of violence. It is resolved, instead, by punching his tin can carapace until it dents.

Now, hold on!  There's nothing wrong with resolutions by punching, at least when the problems seem appropriately punchable (which I reluctantly concede Ultron is).  But even if we simply shrug our shoulders and accept that Avengers 2 chooses to be entirely the wrong thing, it still only barely succeeds at being the thing that it aims to be, which is a rousing actioner.

With the big exception of a superhero-on-superhero battle that asks "Do you remember 9/11?  Wasn't it awesome?" and manages to circumvent your objections before you can voice them, the action content of Avengers 2 is almost entirely comprised of the team fighting hordes of henchmen and, latterly, Ultron's robots.  It's already deathly dull, but when we see Thor grimace before knocking the block off a robot's shoulders, and then turn immediately to poor, human Hawkeye likewise making short work of the same model of Stark tech-derived warbot, it reduces the stakes for Thor to those of the training level of a video game, while simultaneously stepping away from the interesting, tactics-heavy kind of action that the comic books themselves have always given their well-trained human superheroes in order to make them seem useful.

(Meanwhile, regarding Avengers 2's other supervillainous additions—they agree to team up with Ultron for reasons—we still have the Scarlet Witch, changed from the comics into a visually uninteresting telekinetic, and that alternate-universe fan-favorite speedster, Quicksilver.  Joss Whedon, evidently aware that Bryan Singer and Evan Peters own the soul of Peter Pietro Maximoff, almost objectively doesn't even care about his iteration of Quicksilver, either as a character or as a special effect.  Thus, he invests in only a single moment of superspeed fun—you'll know it when you see it—before rotely moving Pietro through his paces till reaching his emotionally inert final scene.  Newcomers to the franchise Aaron Taylor-Johnson and Elizabeth Olson are better than they were in Godzilla, but this compliment doesn't even reach the level of "damning with faint praise.")

At least the baying crowds, who never shut up about "Where is _________ while _______ is happening?!" should be satisfied, for Avengers 2 packs the rafters with familiar faces, from Nick Fury to War Machine, and all get a little something to do, even if their entrance feels distressingly contrived.

The leads themselves (Downey, Evans, Johansson, Ruffalo, and also Hemsworth, in all ten of his lines) return with their chemistry (mostly) intact.  I'll likewise give Avengers 2 credit for actually pulling Renner into the combination and making Hawkeye feel like a valid personality (even as it explicitly laughs at his pointless power-set), rather than effectively leaving him out like they did the last time.  I'm forced to echo the sentiments of everyone else who's bothered to opine on the film: the Whedony quips are the only thing making the film as entertaining as it is, even given the controversy surrounding a few arguably misconceived, arguably misunderstood lines—but, curiously, not the one where Tony Stark voices his idle fantasy of a world where aristocrats could legally rape their vassals.  (Well, I guess it is in character.)   Nonetheless, the best parts—by far—are the hang-out scenes, and the moments where the machine-on-cartoon violence is punctuated by the Avengers' personality clashes.  There's a genuinely wonderful scene, in particular, revolving around Thor's hammer, and the worthiness of certain other individuals to lift it.

But when the action shakily gears up, we feel deep in our bones how disconnected the actors are from one another on their separate soundstages, as well as the blunt editing that doesn't quite glue them together and the blank score that fades decisively into the memory hole by the time the credits are over.  Everything other than the Avengers themselves—even, in the final analysis, Spader's Ultron—is really only so much digital noise.

P.S. I see what's coming clearly now, and I cannot say I am pleased at all with how they've decided to repurpose the iconography and narrative role (without the amazing dramatic arc) of my favorite comic book character of all time. Is it better to have an Adam Warlock called "the Vision" than no Adam Warlock at all?  Maybe, but I'm not sold just yet.
Posted by Hunter Allen at 4:20 AM