Cardboard Science: Does your learned young friend always go on like this? 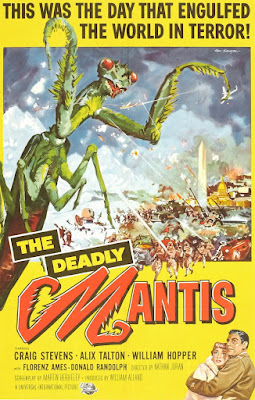 The dullest movie about a giant mantis terrorizing America you're ever likely to see. 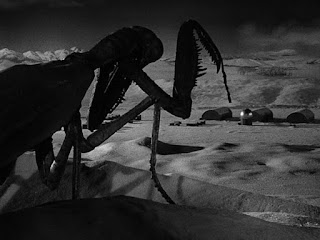 Nathan Juran is not a director you ought to know, although he accumulated a somewhat prodigous and occasionally impressive body of work.  Previously, the closest he'd come to our genre was The Golden Blade, an orientalist adventure tale starring a young Rock Hudson (and therefore something I simply must see).  And soon Juran would collaborate with Ray Harryhausen on 20 Million Miles to Earth and The Seventh Voyage of Sinbad.  Juran capped his genre film career in 1964 with his most critically-acceptable work, one of the better H.G. Wells adaptations, the rather classic The First Men in the Moon.  In between were a pair of legendarily notorious projects, Attack of the 50 Foot Woman and The Brain From Planet Arous, which he considered such trash that he opted not to sign them with his surname.  To my mind, this says all you need to know about his judgment.  (And if it doesn't, then his belief that Arous—easily one of the most memorable achievements in ultra-camp of a generation—was not worthy of his name, whereas the beautiful insomnia cure of the first Sinbad picture was, hopefully says all the rest.)

Anyway, this is getting much too far afield: the point is that The Deadly Mantis was Juran's very first venture into true science fiction, and his judgment was presumably at its least mature.  Well, that hypothesis is completely borne out. 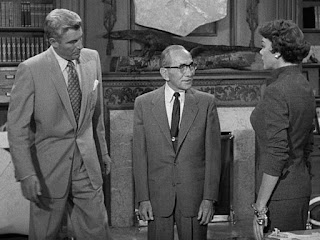 From the casual reveal of its titular monster, to the numbing repetition of its imagery and plot, to the atonal retrenchment into misogyny in the very finale, to the stupefyingly bizarre decision to put a Jack Arnoldesque "hand enters the frame" jump scare into a movie about a giant mantis—and then just totally fucking up what is already the laziest move in the SF director's playbook—Deadly Mantis simply screams amateurism (and not a little disinterest).  Unfortunately, it was not likely to be saved from its flummoxed director by its screenplay.

I am fond of saying that sometimes, the best thing a movie can be about is itself.  Well, sometimes, a movie might be about nothing but itself, and that is the very worst thing about it.

Mantis is a big bug picture, of course, a descendant of Them!—and it is nothing less than one of the most offensively schematic members of its already-formulaic subgenre.  (Your film should not compare unfavorably to The Beginning of the End.)  It was clearly made with the impression that so long as someone built a reasonably good-looking mantis puppet, and special photographer Clifford Stine did what he did best and pasted it into reasonably well-accomplished special effects set pieces, then that's all that was ever needed.  In fact, Mantis is another William Alland production—naturally enough, since this stretch of Cardboard Science is dedicated to his films—and what Alland learned from The Mole People is that stock footage is tremendously inexpensive.  That he generously paired it with a smattering of (somewhat) costly special effects is, speaking charitably, not enough.  (Evidently what he learned from his similarly-themed, vastly-superior Tarantula was "nothing.")

This time Alland himself came up with "the story," although if his "writing" on the Black Lagoon franchise is any indication, this effort began and ended with "this one has a giant mantis."  (The histories are silent, however, on whether this one was based on tall tales told by drunken cinematographers at Orson Welles' house.)  Screenwriter Martin Berkeley's contribution was to devise the threadbare scenario and fill it with words.  Sometimes better (he wrote Tarantula), sometimes much worse (he wrote Revenge of the Creature), Berkeley's Mantis script falls into the abyss of mediocrity: Alland and Berkeley rip off Them! and also Godzilla, except without any of that human feeling crap, or the apocalyptic grandeur.  Alternatively, it's King Kong again, except without any of that monstrous personality, or the fun South Seas adventure. 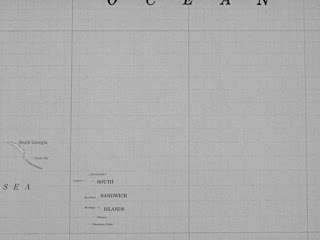 A long way from the charm of the extended prologues of The Atomic Submarine or The Mole People, Mantis' opening gambit involves slowwwly panning over a map; but then, a volcano explodes in the Southern Ocean!  The narrator cuts in, and for now things are promising: "For every action... there is an equal and opposite reaction!"  The camera whips northward!  Something happens in the ice!  And we see our first glimpse of the monster, obscured in its frozen grave but ready to wake to life, as the title card roars into being! 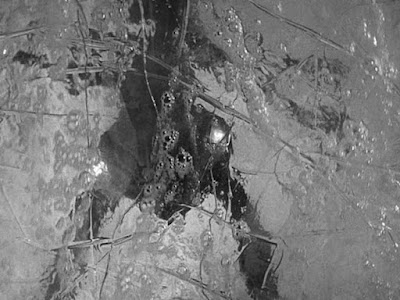 I'm frozen with fear!  (Sorry.  I'm all out of the good puns tonight.)

And then we're treated to a five-minute educational short dedicated to North American air defense, of such length and high-patriotism you'd think the military paid for it, and of sufficient detail that a high schooler could plagiarize a decent essay out of it.  It's frankly stunning—"does the director have some kind of radar fetish?", you might even ask—until you realize that it's Alland calling this play, doing what he did in Mole People, only moreso.  As Mantis goes on, its seemingly svelte runtime of 79 minutes reveals itself to be flabby with Alland's enormous subcutaneous stores of stock footage: natives enjoying kayaks; radar dishes endlessly turning; planes firing rockets, over... and over... and over... and over.  (To a degree Juran deserves some credit for wrangling it into a coherent film at all.)

At the Distant Early Warning Line, radar men from America realize that one of their outposts isn't responding to their hails.  Investigating, the USAF boys discover the opening scene from Them!, concluding that the outpost has been torn open from the outside, and finding one very large clue: a five-foot piece of chitinous material, that they rush to D.C. to have examined by our nation's top scientists.  One of them, Dr. Nedrick Jackson (yes, really) identifies it as insectoid.  He and the Natural History Museum's photographer, Marge Blaine, travel to northern Canada to get personal with the situation.

But if you're fooled by Blaine's feisty attitude and professional success, you may rest assured that she ends this film being felt up and mocked while her extremely expensive camera is tossed nonchalantly aside, all so one of the horny dicks she meets in the White North can plunge his tongue down her throat.  For the time being, Jackson and Blaine's querulous working relationship is the best/only good thing Mantis has going for it.  So, of course, it surrenders it soon enough to the doofy antics at the Air Force base, founded upon the near-ejaculatory reception that a—a—a—girl! gets at their isolated destination.

(I'll even concede that it's halfway cute; cute enough that the perspiring beta male who asks Blaine to dance, and whom the film so scornfully abandons, would have made a much better co-protagonist than the one we get, the stolid, handsy Col. Joe Parkman, who slots into the hero role—and pushes Dr. Jackson to the wayside, too.) 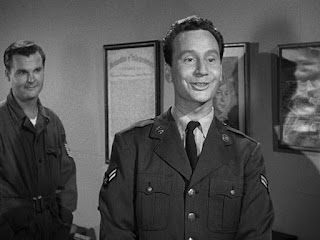 What, Airman Dork wasn't good enough to fight the mantis?

In the middle, Juran finally wakes up: the mantis was already revealed when it attacked some Canadian natives, but now it returns with genuine filmic power, attacking the base in a sequence that is legitimately good.  (But it should be, since it's a direct lift from Tarantula.)

Even so, it's thanks less to Juran than to Universal's tireless music supervisor Joseph Gershenson, perhaps the only person involved who really does their job from the beginning of Deadly Mantis to its end.  Routinely deploying stock music (including Henry Mancini cues) to particularly perfect effect, Gershenson is especially keen here, his score cannily playing along with Juran's tension-building cross-cuts.  Unfortunately, this best effort, this one good scene, is almost totally out of step with the rest of the film.  The moment it ends, and the action moves to America's eastern seaboard, Deadly Mantis becomes a deadly bore, with the minor exception of a few nice disaster beats, and a smattering of cool Cliff Stine photographic effects. 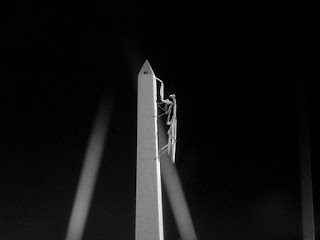 Of course, this one looks great because it's a fake monument and real mantis.

Meanwhile, the majority of the interpersonal "drama" is the forced romance between Parkman and Blaine, which even the actors don't care about—but then, it's not entirely clear they care about anything.  Mantis is sort of anti-notable in this regard, populated by semi-nobodies with invisible personae; those who adore the stylings of such Alland stalwarts as Richard Carlson, John Agar, or even Nestor Paiva need not look to this picture for their sort of energy.  Alix Talton, as Blaine, might work in stronger film; William Hopper, as Jackson, is a touch better than merely there; but whatever very slight charisma they offer the proceedings, Craig Stevens' Parkman sucks out at once, like a vacuum or a vampire.

It ends scarcely less weakly than it began.  Science has little-to-nothing to do, explaining Jackson's third act standing-around.  When the mantis is finished off (oh, spoiler), it's in a scene that comes off more as an execution than a battle.  It doesn't just lack thrilling filmmaking on the screen; it is seemingly devoid of any serious danger or urgency for any of our heroes (let alone our civilization), even on the page.  And the one thing that might have salvaged it, pathos, never showed up for rehearsal. 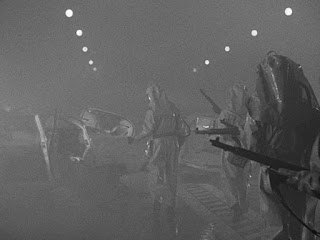 Of course, this is the same film that apparently never even contemplates the twist it obviously sets up, during its scientific discussion of the mantis.  The monster is identified early as a "he"—but, sadly, only by default.  The more deadly of the species, the presumably even-larger giant mantis female, remains only in the mists of prehistory, and in our imaginations.  Abandoned alongside the mantid female are this story's most tantalizing possibilities.  (We'd have to wait till 2014 to see a fragile kaiju romance blossom amidst the ruins of an American city.)  Then again, Deadly Mantis hates women very much, so I can't really say I'm surprised.

Deadly Mantis might still be the best mantis-themed movie ever made, but that doesn't stop it from being a waste of time and a stain upon mid-century science fiction.  Neither good nor deliciously bad, it's worse because it didn't have to be that way.  We'll see if William Alland can redeem himself; he arrives next time with dinosaurs.  But, you know, mantises are pretty rad too—and we see how little of a shit he gave about that.