If you want to bless me, you'll have to bless my bottom 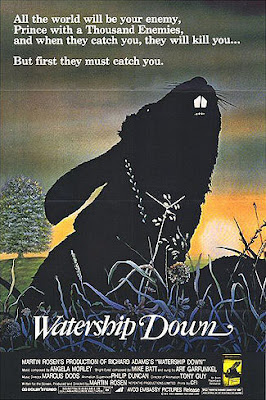 The movie for the morbidly depressed yet deeply spiritual toddler in your life. 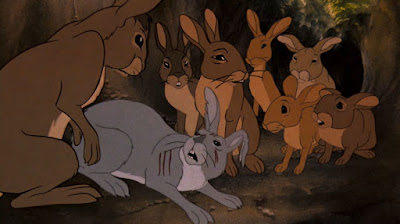 Let's say you wanted to fuck up your kid; English-language cinema has provided you with endless options.  You could show them Nightmare on Elm Street, Hellraiser, The Thing—and that's just to name three.  But if you wanted to be able to keep your kid, after the parental fitness hearing is over, your obvious options number just two.  On one hand, you have that perennial American classic, Bambi.  On the other, you have the British animated adatation of Richard Adams' Watership Down, itself based on the stories he told his two daughters, those stories being based in turn upon his experiences on the Western Front in World War II, which (after all) was the second most fun front in the second most fun world war.

Bambi, you'll recall, is punctuated with the pointless death of its titular deer's mother.  The tone momentarily collapses into bleakness and grief; as we wept, we learned that danger and even death can enter our world and hurt us.  Watership Down politely disagrees on that point, and so our rabbit protagonists die with brutal regularity, underlining the film's thesis that the world is danger and death, for every object in it has been designed by the hand of God to kill you.  As we shivered in trauma, we learned that even if through cleverness and fortune we avoid every predator and every trap and every accident and every challenge, eventually our bodies will wear out, and we will, all of us, die.  So, to amend what I said at the beginning, if you desire to totally rid your child of their innocence, rendering them morbidly aware that the one indisputable fact of life is that it ends, there is only one correct choice.

But all of this, naturally, could only qualify as an insightful summation of the film if I were still only seven years old, the age when Watership Down had its first opportunity to shatter me (as it would continue to do at regular intervals throughout my life, long after I had any excuse for crying at the fate of cartoon rabbits other than my general oversensitivity to mediated emotionalism).  Even at seven, though, it's hard to miss the point, given that the movie's most formally exciting sequence, its prologue—overseen by the original director, John Hubley, before he died too—helpfully explains precisely what Watership Down shall be about.  It all begins with the story of the first rabbit. 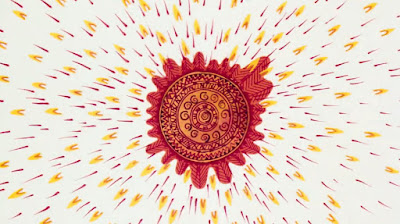 From the darkness came the great god Frith, who created the world.  In these early days, all the animals enjoyed a paradise, rendered here as a formless white background, marked with lines that represent the grass they eat.  But one of the animals, El-ahrairah, the Prince of Rabbits, was too greedy.  The other animals prayed to Frith.  He answered them, giving the herbivores the gift of teeth—and a new source of sustenance, the children of the Rabbit Prince.  However, Frith took pity on El-ahrairah, descending to Earth one final time; Frith found him digging, his head hidden in the ground.  El-ahrairah refused to identify himself, or to accept Frith's blessing.  But Frith is not one to be denied; he gave his intended gifts of speed and agility to El-ahrairah's hindquarters instead.  The Rabbit Prince was reborn then—still weak, but now given a chance to survive.

Of course, it is not clear whether Frith meant to mitigate El-ahrairah's punishment, or to make it worse—since, thanks to the first rabbit's original sin, the lot of his children would be to live always in fear.

We settle our gaze upon a rabbit warren in Sandleford, soon coming across two of its inhabitants.  The first is Hazel, a solid, clever rabbit, committed to pragmatism and diplomacy.  The second is his brother Fiver, a more mystical sort, with crybaby tendencies so pronounced that the film's sole funny moment comes from another character mocking his tremulous manner of speech.  Thing is, Fiver is also always right; and perhaps Watership Down can be summed up in the following quote from the original book's publisher: "I've just taken on a novel about rabbits, one of them with extra-sensory perception. Do you think I'm mad?" 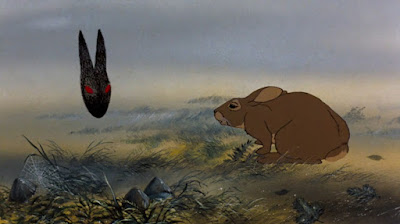 Fiver's a psychic, all right, and the first thing he does is prophesy the arrival of Man, represented by the field running red with rabbits' blood.  The second thing he does is warn his brother, and when Hazel's efforts to get their warren's chief to order a relocation fail, the brothers lead as many as will follow on a quest to start a new warren, one that won't be tilled up with all the rabbits still in it.  Blackberry, Pipkin, Dandelion, Silver and Violet all join Hazel and Fiver's doomsday cult; but the most important member of their new clan is Bigwig, a soldier, who provides the brawn they need to get past the warren's guards—including Holly, whom we'll meet again, when he tells us that, yes, Fiver was right about all that death after all.

In the meantime, the rabbits trek across the country, having what might qualify as "adventures" in a cartoon that didn't subject its characters to so much random suffering.  They meet a warren full of rabbits even crazier than Fiver; they find a barn full of caged female rabbits, but guarded by a dog, a cat, and—worst of all—humans; and, finally, they run afoul of the Efrafans, rabbits of a warren ruled with an iron foot by General Woundwort, recipient of perhaps the baddest-ass death in the animated canon. 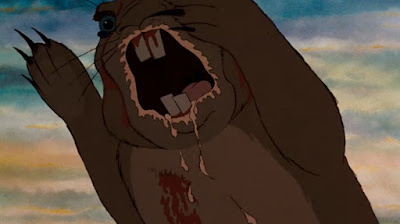 They also meet a bird, named Kehaar, and this is where things take a turn for the crap.  It's intermittent crap to be sure—there's still that amazing villain death to get to—but before Kehaar shows up, Watership Down has been positively rigorous in its commitment to a kind of realism that you don't expect in a cartoon presumably made for children.  The only major concession to human watchability is that the rabbits can talk.  Before Kehaar, other animals have, at best, treated the rabbits with indifference.  More normally, they've either tried to eat them... or they have eaten them.  In its finest moments, Watership Down is everything that The Lion King was too frightened to be.

Then Kehaar enters the picture, like an invader from another, much dumber and vastly more childish picture, providing the rabbits an airborne ally and an interspecies friend.  We've seen this before and would see it again—it is an unkillable trope of the genre—so at the very least, he might have been minimally intrusive; unfortunately, even this small comfort is denied us, as the monster yammers away in an outrageous accent about the "beeg! waaater!"  At once so direly misconceived as a character that he breaks the film's themes just by existing and so horrifically obnoxious he makes it embarrassing and painful to watch, Kehaar is easily one of the vilest creations in cartoon history.  When I discovered that this loathsome bird also represents Zero Mostel's final performance, I came to understand the pain so many others felt when they witnessed Orson Welles end his career as a planet-sized robot in Transformers: The Movie.  But Unicron was awesome.  Kehaar is a stain upon Western civilization itself, and—honestly—I'd rather not have even known.

I belabor the seagull because—while genuinely terrible—he's the only really bad element in the whole film.  On the animation front, Watership Down is of higher quality than you'd ever expect from an independent British production—but, then again, this isn't that robust of a compliment.  The backgrounds suffer the most, ranging from "sumptuous watercolors distinguishable only in style, not in quality, from the oil paintings traditionally used in Disney animation" all the way to "watercolors that demonstrate why Disney almost exclusively used oil paintings rather than watercolors."  The character animation likewise veers from very good to noticeably cheap, but, quite impressively, the animators nearly always avoid anthropomorphizing the animals any more than necessary.  (They don't skimp on realistic battle damage when the time comes for the film's dour, bloody action, either.)  Taken altogether, it's very handsome for its budget—and shockingly good given producer-writer-and-replacement-director Martin Rosen's lack of experience.  You'd barely be able to guess that it was Rosen's first film from the minimalist splendor which Watership Down sometimes obtains, most notably in the film's too-brief musical sequence, when Mike Batt and Art Garfunkel's heartbreaking ballad "Bright Eyes" arrives, helping you prepare to slice your wrists, should death reach yet another rabbit before rescue can.  Likewise, the imagery deployed for the failing rabbit warrens is upsettingly sharp—indeed, it's quite literally nightmarish, when you're seven, and never less than when it comes to the fate of the rabbits who complacently refused to move in the face of predicted disaster.  (If there is any weakness here at all, besides the bird, it's merely that Fiver's psychic mumbo-jumbo makes an uneasy metaphor for predictions of doom based on facts; even then, it doesn't do much to undercut the efficacy of Watership Down's own thinly-veiled ecological lament.)

Meanwhile, there is nothing that I do not love about the rabbit religion, above all the Black Rabbit of Death.  The specter appears three times: once in the Creation Story; once as a warning vision; and, finally, and inescapably, as the true death.  But death, our constant and unwanted companion on the journey to Watership Down, comes at the end as a friend—and there is no way around it, we're dealing with the jerkiest of tearjerkers here, however damnably well it hides this fact beneath a veneer of visual poetry that is simply too elegant to let you call the film that delivers it "manipulative"—even when it so absolutely is.

See, in the finest tradition of cartoons everwhere, Watership Down grants just enough personality to the rabbits that they can serve as vessels for our own hopes and fears; but as very, very few cartoons are equally willing and able to do, it destroys those vessels, right before our eyes, for that is what we have to look forward to as well.  But, says Watership Down, it needn't be that bleak.  Maybe we can change things, so that when the Black Rabbit comes (as he must), we too can lay down without regrets...

Even if all we've accomplished—if we're really looking closely—is carve out a space amidst the endless suffering of nature that was large enough for us to live and die in without feeling too much pain ourselves.  Yeah, okay, I guess it is pretty fucking bleak, after all.  And that's what makes it so great.