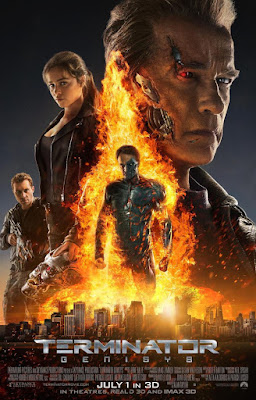 The franchise does get worse, after all. 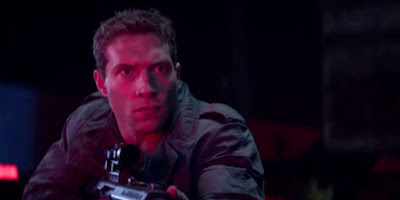 And so, with great and unforgivable tardiness, we arrive at Terminator Genisys—at what I'd reckon was three weeks after the world had already stopped caring, if that wasn't being a little too charitable.  Having flopped upon its opening weekend, losing its makers around $70 million, it's fairer to say that the world never cared in the first place.  And indifferent hostility is exactly what Genisys deserved—for it is awful, on every level, in nearly every last moment, in just about the blandest, stupidest, most hatefully boring way a bad movie could be.  It is, by a small but cozy margin, the worst movie I've seen this year.  It's hard to know where to begin, as everything is so equally insipid.  How about the story? Well, why the hell not.

Welcome back to 2029, where John Connor and Kyle Reese are the leaders of the human resistance against Skynet, the computer that ended the world back in 1997.  As in the first Terminator, the humans are winning: tonight, Skynet's mainframe falls.  But the evil AI still has a few tricks left, like a time machine—something John knows all too well.  So they capture the device, and in short order Kyle volunteers to return to the past to defend John's mother, Sarah, from Skynet's last-ditch effort to preserve itself.  Bowing to fate, John sends him—but just as he goes through, Kyle witnesses a terminator emerge from the crowd and kill John.  This isn't exactly our first clue that this isn't just a Terminator remake—the goofy-as-fuck rendition of James Cameron's future war was the first, and whatever the hell Jai Courtney thinks he's doing was the second—but it is, I think, the first time the filmmakers were intentionally showing their hand.

Before he arrives in the present, Kyle is afflicted with a series of curious hallucinations, appearing to depict another, Judgment Day-free life for the soldier; but once this plot element has been set up, Kyle reenters the continuum in 1984, still ready to try to rescue Sarah.  Unfortunately for Kyle—and, ultimately, for us—1984 is an ambush, and Kyle's immediately beset by the enemy.  Not by the T-800—that particularly monster's been dealt with—but by a liquid metal T-1000.

Only through the intervention of the woman he was sent to save—and her own terminator guardian, "Pops"—does Kyle survive the first few minutes of his adventure.  We are made to realize now that Skynet's repeated attempts to kill the Connors, and the Connors' repeated attempts to kill Skynet, have warped the timestream so much that we can no longer assume anything about the past or the future—except, of course, that catch phrases will be repeated and iconography regurgitated.  For there are some constants in any universe, and particularly in Terminator sequels.

You know what else didn't need complex moving parts?  The first three movies.

The trio flee from the T-1000, but not far: Sarah and her guardian have a plan.  It turns out, however, that their design is bigger than just beating one T-1000.  Having built their own time machine out of trash, Sarah and Pops intend to travel to 1997 and stop Judgment Day.  Now Kyle chips in, explaining that in his vision he heard his younger self say that the timeline has changed.  Skynet has taken on the guise of Genisys; the end of the world has, once again, been rescheduled. After much annoying debate, Sarah is convinced to aim her time portal at 2017.

However, it remains an open question whether any of her other portals will ever point Kyle's way, thereby ensuring the existence of her son—and Kyle's son as well, in case you didn't know, which Kyle in fact does not.  In any event, once in 2017, the final battle to save the future begins (for the fourth time), with the new wrinkle that John Connor himself has come back—but not on humanity's side.

So, basically, Terminator Genisys is an atrocious AU Terminator fanfic that movie producers threw money at till it resembled, though it never became, a functioning motion picture.  Certainly, Genisys demands a level of familiarity with its source material that only the fan could possess (why, it must present as little more than babbling madness to any poor soul who never saw Terminator or T2).  Yet it consorts with a devastating irony: a fan of the franchise could scarcely enjoy a moment of it, as it forces that fan to constantly compare the new film's inept remixes against the classic original tracks. 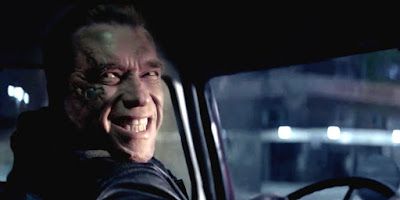 It is the Star Trek Into Darkness of our time.

The most glaring problem, if not the largest, is that Genisys represents the final abandonment of the franchise's meditation upon time travel, free will, and fate.  Rather than the heady ideas of the first three films, then, Genisys cooks up a mess of timey-wimey shit, and has it delivered to your table by none other than the Doctor himself.  (Casting Matt Smith as Skynet, incidentally, is the precise kind of meta-idiocy that plagues this film, causing grotesque buboes to erupt upon its surface with horrifying randomness; but it's not even close to the most outrageous example.  That would be a soundtrack gag straight from 1997, presented in 2017, and so obscenely bad that I considered walking out and pretending the series ended in 2009.)

Semi-sensibly, the basic idea for Genisys' time travel scheme draws from quantum mechanics, positing a mixed-up multiverse.  And so far, so good—it is, effectively, what T2 did, only Cameron had the sense to never make a big deal out of the logistics.  We've seen branching timelines be just as compelling as the beautiful consistent loop of Terminator.  But when Kyle begins experiencing memories of things outside his worldline, the movie drifts totally into untethered fantasy.  In that one decisive moment—that "nexus point," if you absolutely fucking must—screenwriters Laeta Kalogridis and Patrick Lussier forever ruin the series' time travel as something to be enjoyed on its own merits, rather than just one more dull plot device to move franchise components around on their flowchart.

Fun might still have been had—I'll concede some fun is had—with the ludicrously overstuffed time war that defines the first half of Genisys.  It plays some halfway-clever jokes on our preconceptions, most notably the spin it puts on on its T-1000.  And for as long as the polymimetic machine lasts, Genisys even reaches the level of mildly entertaining.  The shapechanger's actual effectiveness can only be measured in the milli-Patricks, surely, yet any kind of entertainment is so rare in Genisys that these incredibly small favors should be embraced as what they are—the few safe harbors available to us as we sail upon a roiling sea of burning garbage.

And, like Skynet, garbage regrettably has a face: behold Jai Courtney, the infamous Fivequel Destroyer, whose contributions to cinema I previously had been lucky enough to avoid.  I don't really know to what extent I can blame the man for the meathead that everyone keeps calling "Kyle Reese," but the role is so poorly played, even on its own very meager terms, that I really need to blame him for something.

Despite all evidence, Kyle is a returning character; and so judgment comes swift.  I would believe you if you told me Courtney had never so much as seen Terminator, just like I'd believe you if you told me the screenwriters had only read its Wikipedia entry.  (While only a few visual continuities indicate director Alan Taylor's ever screened the thing in his life, either.)  Whoever's fault it is—it's clearly "everyone's"—the unfathomable distance between the Kyle Reese of that film and the Kyle Reese of this one is like the gulf between galaxies.  Even if everything else had worked—and, God, it doesn't—Courtney's Kyle might just have ruined Genisys anyway.  Michael Biehn's indelible evocation of the human animal is completely replaced here, and with something so absolutely unacceptable that Courtney makes everyone else's performances—all of them bad—nonetheless look good, for he stands them next to terrible.  (Do you buy that this Kyle is a virgin, has suffered years of trauma, or has any emotion whatsoever beyond dull surprise?)  Emilia Clarke gets the most out of her co-star's implosion: you almost don't notice how off-model her Sarah is—although at least Clarke has enough justification that she's less "wrong" than "dull."  Predictably, Arnold Schwarzenegger is the best Genisys has, but he's helpless to carry his co-stars here, the way he did in Terminator 3. Here, he can scarcely carry himself.

Since I mentioned it, Terminator 3 makes an interesting comparison.  After all, it too is ribboned with bad writing, with bad performances, with stunning affronts to series continuity—yet I would reclaim it from the scrap heap.  Why not Genisys?  First, I wish I hadn't called Terminator 3 director Jon Mostow a "disaster"—because now I don't know what to call Alan Taylor.

We last encountered Taylor's uncommonly miserable sensibility in Thor: The Dark World, which was only rescued by its screenwriters, its actors, and its CGI artists.  There is no one to rescue Taylor here.  So deeper he sinks, into the murky slurry of his movie, delivering a Terminator film—a Terminator film!—with the worst sense of pace of any blockbuster made in years.  Perpetually too busy to focus on anything but its very worst aspects, Genisys is constitutionally devoid of the merest fraction of the tension of its forebears. Visually, it veers out of control instantly. At its best, it's flatly uninteresting; at its worst, psychotically ugly.  It looks and feels like the overbudget finale of an impossibly bad TV show—poor compositions slapped together with brutally improper editing, all wrapped up in CGI hardly fit for a Matthew Vaughn pseudo-parody.  Literally only two sequences have any verve to them at all—the destruction of the T-1000, and the school bus crash.  Everything else is so crap it makes McG and Terminator Salvation look accomplished; Jon Mostow and Terminator 3, like James Cameron himself.  By the laughably bad finale, consisting mostly of Kyle and Sarah shooting holographic projectors in endless fits of pique, my impression of Taylor as perhaps the worst big-budget director working in cinema today had been confirmed.  He needs, desperately, to be shipped back to HBO.  At least then I would no longer have to look upon his works and despair.  (And the denouement, if anything, is even worse than the climax, adding grossly ineffective sentimentality to the mix.  This film truly has it all.)

Oh, but why all these words?  I could've just said that this is the one where a terminator makes a joke about the size of Kyle Reese's penis, and kept my review to a paragraph.

Let's just finish this.  I know we've all said this before, but this time I think we mean it: this movie has finally killed this franchise.  And it's never deserved it more.  I need a vacation.