There's the beef, part II: Am I your fire? Your one desire? 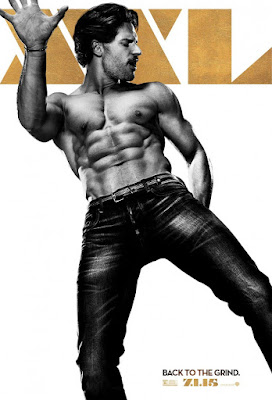 Purely a cash-in but brutally honest about it, MMXXL seemed poised to deliver on all the sexy man gyrations said by blind people to be missing from the original.  Counterintuitively, it seizes on the hang-out comedy of the first instead, delivering a basically pleasant film, with few and mostly-backloaded dancing highlights.

Magic Mike XXL is kind of a terrible sequel, which was pretty much inevitable: it's deeply unnecessary, of course, but that's only the beginning of it; there's also the fact that any sequel to Magic Mike would be obligated to be about stripping, and by that film's own standards, this means that any sequel would also be obligated to be very depressing, and MMXXL is not that thing; in fact, outside of a few stinging lines that recede almost as soon as they're uttered, it is a frivolity of the highest order; cinematically, it doesn't even look anything like Magic Mike; and the best/most salable parts of Magic Mike, the dance scenes—that is to say, the entire reason MMXXL exists—have been either scaled back, or suck badly enough that I wish they had been.

Indeed, there's a sequence—a very, very long sequence, that dies on the screen and just keeps dying—where Gregory Jacobs, collaborating with Steven Soderbergh, elects to show quite a bit of male stripping, featuring two cypher strippers in a row, neither of whom we've ever seen before, each doing their largely prosaic routines.  Jacobs and "Peter Andrews" shoot it with a grubby, dull, underlit pseudo-naturalism, as if to ask you, straight lady or gay man, "You said you wanted some male stripping, did you?  Well here the fuck it is, and we hope very much you're not happy."  I wasn't: although as a straight man perhaps I overreach with my criticism, Jesus God, was that ten minutes boring, its tedium relieved only when Donald Glover finally bothered showing up.  Even that was mainly interesting because I'm a fan of Community, rather than because of anything intrinsic to his goofy naked psychic/freestyle act—which, incidentally, emphasizes an emotional rapport inherent to the act of (male) stripping which only makes the client seem sad and feeble, in a way that yelling enthusiastically into a man's thrusting loins never could.

Anyway, that's my annoyance talking, and we're getting ahead of ourselves.  Being a bad sequel doesn't necessarily make MMXXL a bad movie, though it is by no estimation a great one, or even a very good one.

Presumably three years after the first film, Mike Lane has settled as much as anyone can settle into being the owner of a terrible small furniture-making business: he has one employee, whom he cannot afford to give a health plan, and is kind of doing okay, one supposes.  Actually, he doesn't live too dissimilarly from his character in Foxcatcher, so it's hard to say.  (As a side note: I'm unsure whether there's any real economic commentary in MMXXL, or if returning screenwriter Reid Carolin is simply being canny and remaining true to the characters he created, permitting them to occasionally spout fatuous econo-speak.)

Mike misses dancing, naturally, and teases us with a few moves, busted for his own edification.  However, he resists the call to heroism—or whatever you want to call it—and must be induced by a cunning plan to reunite with his former strip club colleagues.  Once he's there, Mike, overwhelmed by camaraderie, agrees to one last dance.  With Big Dick Richie, Ken, Tito, and the indefatigable Tarzan, Mike embarks upon a road trip to the male stripper convention in Myrtle Beach, SC, taking place on Independence Day 2015.

Meaning I apparently just watched a movie climax in real time, which is kind of disturbing.

What happens next is possibly the shaggiest story to be told in cinemas this year, a hang-out flick that barely rises to the level of "picaresque adventure" and—honestly—barely seems to care.  Nonetheless, there's an enormous amount of easy charm inherent to the putative Kings of Tampa—and given my holdover affection for their characters, it was most pleasant to see them fleshed out.  This is especially the case with The Kid out of the picture, though of course McConaughey's Dallas is acutely missed.  Not missed at all, however, is The Kid's sister, Brooke, ironically made even more shrewish in her absence than she was when she was actually around, silently and often not-silently judging Mike's life choices like she was some kind of Stanford grad herself.

The vignettes that comprise MMXXL's "plot" are reliably amusing, which is well since MMXXL is pretty purely a comedy; unfortunately, they are rarely very amusing.  The readiest comparison I can make is to Clerks 2.  Take out the backstage intrigue, after all, and Magic Mike is more-or-less Clerks, only with more dancing and fewer debates about contractors on the Death Star; MMXXL is directly comparable to Clerks 2 insofar as both are sequels to popular movies, made for no particular reason other than "we strongly believe that people will buy tickets to see it."  Yet Clerks 2 gets by.  In fact, Clerks 2 is kind of a great movie; as much as it recapitulates it's characters' arcs, it heightens the original's already silly tone to a level of outrageous pure slapstick (indeed, to the extent it comes off more as a spiritual sequel to Mallrats than its nominal predecessor).

MMXXL, meanwhile, suffers not just in comparison to its vastly more substantial forebear, but on its own merits.  It doesn't recapitulate Mike's arc; it doesn't have an arc.  Good grief, it doesn't even have so much as notional stakes—there's no community center to save, nor do the boys learn to work together as a team.  (I'm fact, it's kind of the exact opposite of that.)  They're simply on a trip because trips are, I guess, fun.  Tragically, then, after an exciting and even experimental first half hour, MMXXL finds the register within which its comedy will henceforth operate.  The only problem is it's obviously the wrong register—obviously, because previously it had actually sampled another, far superior one.  If only for a single scene, it was amazing.

The very best moment—one of the best moments in any movie this year—comes terribly early, casting a long shadow that MMXXL never, ever escapes from.  Here, Big Dick Richie, facing a crisis of confidence because his dick is too big—I did not write this screenplay—is challenged to live up to his vast potential as a hot man, and put a smile on a surly cashier's face.  Music comes—I don't even know if it's diagetic, and the scene plays even better if it isn't.

What occurs probably cannot be spoiled, but I won't attempt to describe it further: if you've seen it, you know exactly what I mean; if you haven't, but intend to, I wouldn't dare risk ruining it; and if you wouldn't see MMXXL in a thousand years, and are reading this simply for the hell of it, then you should simply be made aware that words cannot do it justice.  It is sublime slapstick—and somehow even genuinely touching.  MMXXL not only never reaches anywhere near this height again, it never even tries.  Immediately thereafter, it resets to the same kind of blithe, naturalistic humor of awkwardness that worked extremely well in the original, melodramatic Mike, but operates to make MMXXL merely watchable.

There will be further good parts after this, to be sure, but it is a very, very long time before there is another especially good dance sequence; not until the climactic convention sequence, in fact.  There, each King of Tampa gets a new routine, that they've invented over the course of their trip, and about half of them are any good (indeed, only half of them even read as stripping, rather than some kind of lame performance art).  Again, Big Dick Richie steals the show; although Mike's number, with a partner this time, is one of MMXXL's two set-piece dance numbers that are as conceptually sound as the original's surprisingly thoughtful productions.

In the meantime, there's other stuff of vague interest: for example, Elizabeth Banks' cameo, featuring an offensively awful cartoon Southern accent, is interesting; although Jada Pinkett Smith, in a nearly personality-free supporting role, is absolutely not.

More impressively, Andie MacDowell of all people shows up.  She's here to host the group at her Southern mansion, whereupon we're treated to MMXXL's questionable sexual politics, forwarding the claim that male strippers only exist because the women who go to see them have been failed by lesser men.  Not only do I imagine that the converse argument would be incredibly unpopular, it's obnoxious on its own terms for how nakedly it panders to MMXXL's key demographic.  It's as close as we ever get to a theme, but above all is it a clumsy attempt to exorcise any residual shame still clinging to the housewife audience that pays Soderbergh and Tatum's bills, for coming out to watch this, the softest softcore porno of them all.

I can't call MMXXL bad; it's too basically enjoyable, and it has that one perfect scene, that will probably remain with me forever.  But I'll tell you, I almost want to call it bad.  If nothing else, its betrayal of its target audience leaves a bitter aftertaste.  Myself, if I had come to this movie to actually get hard, I don't think I'd have gotten my money's worth in the slightest.  Fortunately, I only came to see a group of guys be endearing, and on this very minimal level, MMXXL does work.