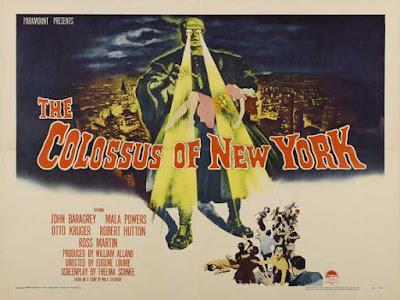 THE COLOSSUS OF NEW YORK

The mind-body problem may be one of the biggest wastes of time in all philosophy—but it's a pretty great origin for a soulless mechanical monster.  The Colossus of New York remains one of the 1950s' most memorable science fiction films. 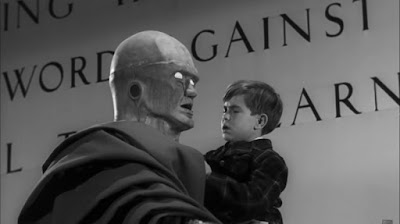 In 1958, B-movie producer extraordinaire William Alland, formerly of Universal-International, arrived at Paramount.  There and elsewhere, he'd spend the next decade making exploitation films, largely involving teens and their sexy sex, rather than the rad aliens and monsters that had so far defined his output.  Even so, the very first task Alland's new paymasters gave to him was to create a science fiction double-feature.

Perhaps sadly, the result of Alland's efforts would be the two last SF films of his career.  We say "perhaps," because the second feature, The Space Children, was an underbudgeted, underscripted failure which not even the participation of Alland's most talented collaborator, the great Jack Arnold, could rescue.  But the first half of Alland's double-bill was a work of comparative substance, with a somewhat larger budget and the talent of its director, Eugene Lourie, more clearly on display.  This film was The Colossus of New York, and—happily—it allows us to give William Alland the kind of send-off we hoped we could, back when we began this tribute to his legacy.

Up until Colossus's final act, which opens up its scope (and, in the process, shift its tone from that of creepy suspense to one of violent cartoon action), what we have is Gothic horror with a late 50s overlay, its events confined almost entirely to a country mansion and the secret laboratory beneath it.  Gothic flavor shouldn't be too surprising, though, for Colossus is as shameless a riff on Frankenstein as anyone's ever made.  Yet this recapitulation of Mary Shelley's classic tale does add a twist to the old formula: Colossus literalizes the metaphorical relationship between creator and creation, binding the two together by blood, as a terrifyingly demanding father and his tragic favorite son.

Let us meet the Spenssers, the smartest family on the planet.  The patriarch, William Spensser, is amongst the foremost neurosurgeons in his field.  (Remember this detail, for he may well turn out to be some kind of modern prometheus.)  The elder brother, Henry Spensser, is an engineer who has developed important innovations in factory automation—and as a side project, he's been working on a robot that can walk like a man.  (This might also be important later.)  The true genius of the family, however, is younger brother Jeremy, a multidisciplinary prodigy who's just become the youngest recipient of the Nobel Peace Prize for his work in agricultural biology.  (He asks, humbly, if the honor isn't premature—and it really is, since his advances have not yet come remotely close to achieving his noble goal of transforming polar wastes into farmland.)  Henry, we intuit, feels overshadowed.  We are subtly introduced to Henry's jealousies: not just for their father's approval, but for his brother's lovely family, too.  It's a little sad (and more than a little awkward) how Henry fawns over his sister-in-law Anne and his nephew Billy.  But soon we'll realize that Jeremy, raised up like a living god in his father's estimation, has nevertheless gotten by far the worst part of the deal.

When Billy loses a model airplane to the wind, Jeremy chases after it into the street, and—in a fashion not very becoming of a genius—he meets his intellect's match in the grille of a speeding truck.  Declared dead on the scene, his father has his corpse transported not to the morgue, but to the Spensser estate.  The funeral, curiously, is closed-casket.  William, for his part, seems less than willing to face his grief head-on.  His least favorite son seeks to console him—but, when finally given admittance to his father's lab, Henry realizes very, very slowly that his brother isn't completely dead. 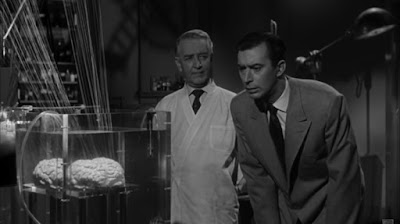 
With Henry's help, Jeremy's salvaged brain is placed in a massive robotic body—a colossus, if you will.  The operation is a success, but—quite naturally—the very first thing Jeremy does upon regaining consciousness is undergo a mental breakdown.  When William seeks to try again, Henry forces his father to give Jeremy a choice as to whether or not he'll accept this less-than-satisfactory resurrection.  Henry notes darkly that he has also installed an off-switch in Jeremy's robot carapace—a switch that Jeremy cannot reach.  Henry is certain that if Jeremy could make the choice for suicide on impulse, he'd be dead within minutes.  Indeed, he estimates that the whole project has been nothing but an abomination. 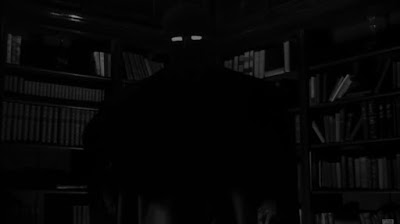 
Yet Henry continues to assist his father, perhaps even taking some joy in his brother's suffering.  Eventually, he goes so far as to seek to fill the masculine void in Anne and Billy's lives.  For his part, Jeremy succumbs first to despair—and then to cruelty.  William, exhorting Jeremy to continue his work feeding the hungry, finds himself appalled when Jeremy begins speaking of eliminating them instead.  Meanwhile, the destruction of Jeremy's physical body has unshackled the powers of his mind: he can see across gulfs of space with a strange new sight now; he can hypnotize his enemies, bending them to his will; and when his pawns are no longer useful, he can destroy them, with a gaze of deadly radiation.  At last, Jeremy strikes out to impose his final solution upon the world—and if they don't like it, they can just eat his rays.

So, we see that Colossus trucks with one of philosophy's biggest and (ironically) most unimportant questions—the mind-body problem.  What's interesting about Colossus is its supposition that, without a body, there is no soul—without the human sensations that arouse human emotion, the mind grows cold and distant at best.  At worst, the residual human drives that remain within the mind turn to perversity.  Kindness, it seems, is rooted in the physical; and without that connection, the Pure Will becomes monstrous. 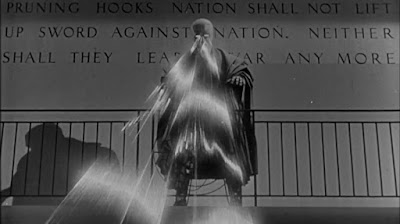 
But whether that's sophistry or not, it's just as easy to read Colossus literally, as a story of primal human emotions, played out with science fiction props.  The ambiguity, even inconsistency, of Henry's reactions—and Henry is always just reacting, as if he learned long ago that acting on his own behalf wouldn't get him anywhere—offers Colossus an intriguingly flawed protagonist.  He can love, hate, or be entirely indifferent toward his brother, depending on the hour; but his desire to be his brother is constant.  Henry is at once pitiable, deeply unlikeable, and—in the end—sympathetic.  It is William, then, who must be blamed.  Even a cursory inspection reveals the selfishness of his efforts to wrench his son back from oblivion, all so he can go on living vicariously through him.  And Jeremy himself deals with the most primordial terror of all: the loss of the possibilities of the body.  Imprisoned within his numb, clumsy shell, Jeremy's turn to supervillainy seems practically inevitable.

And that inevitable transition is not handled with the utmost grace. As Colossus goes on, it errs on the side of giddy, goofy thrills.  It's hard to be angry at Colossus for going down this path: robots wreaking chaos, after all, is one of the most important things we go to the movies to see.  It's nonetheless hard not to feel like the premise is let down by such a broadside approach, as Jeremy ultimately attempts a coup d'etat against the whole planet when he attacks the United Nations Building in New York.  Yet Colossus is an object of its time—even the most insightful and sophisticated SF films of the 1950s, Forbidden Planet and The Incredible Shrinking Man, knew that their bread was still buttered on the side marked "brash spectacle."


Eugene Lourie's spectacle is certainly brash enough for the needs of any lover of the genre, and his staging of the final rampage is particularly vivid: Jeremy's victims stand arrayed beneath him on a chessboard floor, while he bellows out his evil plans in front of the U.N.'s Isiah Wall.  (Art directors John B. Goodman and Hal Pereira depict the U.N. with a touch of license, to be sure, but with a little well-taken irony, as well.)

Lourie didn't like Colossus—in an interview, he compared directing Colossus to his childhood battle with scarlet fever—but he nonetheless brought a certain verve to the project.  Colossus is an awfully quick-moving thing, 70 minutes short, and few of its minutes wasted.  Lourie offers the occasional black-and-white beauty, particularly the Colossus looming in the shadows, his demonic eyes flashing in the darkness.  Even greater praise must go to the sound design, which crackles almost painfully with electricity.  Alongside Van Cleaves' idiosyncratic (and compellingly downbeat) all-piano score, Colossus' sound straddles a very thin line: it works marvelously on the nerves—without ever becoming genuinely enervating.

If Jeremy's last stand at the U.N. is Colossus's most invigorating sequence, certainly as memorable is its most suspenseful, the scene where Henry discovers exactly what his father's been working on.  The filmmaking arts all come together to make this moment work—the aggressive soundscape, the canny art direction, the surprisingly sharp editing.  Though we're leaps and bounds ahead of poor Henry, we are made to feel his dawning, queasy horror—confusion mixed with his shocked frustration that he'll never be free of his damned brother's shadow.  In moments like these, even Colossus' acting is very good—and that's no trivial thing, for a late-period William Alland sci-fi flick.

Ultimately, The Colossus of New York's lack of rigor and leap into frivolity keep it from attaining a position in the unambiguously great films of its genre, but there's a lot to chew on here—and even more to enjoy.  So, thank you, Mr. Alland.  You may not have been the most consistent science fiction creator, and if there's any thruline to your body of work, it was "will it make a profit?"  But when you felt like it—or, maybe, just when you could—you truly did give us wonders.


That which is indistinguishable from magic:
The morality of the past, in the future!:
Sensawunda:
Posted by Hunter Allen at 10:16 PM