John Carpenter, part V: We're caught in a trap, but I can't walk out—because I love you too much, baby 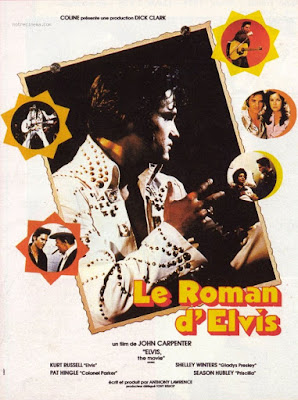 I know a lot more about Elvis than I did before I watched this movie, and I care either the same amount, or less. 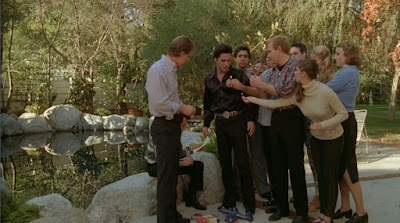 Somehow, I've actually seen two movies about Elvis Presley this year.  But if you'd told me that the one made by Christian filmmakers for Christian audiences would be more interesting than the one directed by John Carpenter and starring Kurt Russell, marking the beginning of their legendary working relationship—well, honestly, I'd have probably believed you if all you said was that it was more interesting, since modern Christian media (which replaces the obligation to be competently-made and enjoyable with an obligation to be spiritually edifying) is also a window into a strange universe parallel to our own.  However, if you'd told me that The Identical was, in fact, the better of the two films—and a lot better, at that—I'd have assumed you were a little bit touched in the head.  Yet it is absolutely true.

Pretty much as soon as the production of Halloween had wrapped in the spring of 1978—and, therefore, before it was released to theaters in the autumn, busting that block wide open—John Carpenter sprinted over to Dick Clark Productions to do another TV movie to be broadcast the following year on ABC.  Details are spotty on exactly how Carpenter could have possibly even got the gig—he was a young exploitation filmmaker, and TV movie or not, this thing was a big deal, conceived with an eye for awards and primo advertising revenue, and it was budgeted to match at $2.1 million (or, almost seven times what Halloween cost).  Carpenter has said it was because when the executives were told he'd done his own scores, they must have believed that he knew music.  Now, there probably are songs that are more different than Halloween's major theme and, say, "Suspicious Minds," but I really doubt you'd be able to quickly come up with an example. 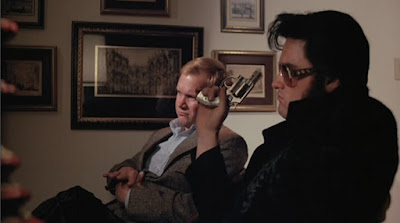 Whoa!  Hold your fire, Elvis.  They're still both pretty great.

Other than a paycheck, it is impossible to know what brought this director to this project, since nearly nothing of his personality is evident in the final film, and other than a POV shot here or some inky black lighting there, there is little evidence of a personal style, or much of any style, especially once we get beyond the opening five minutes that promise a vastly more fascinating movie than the one we actually get.  Easily the most uncharacteristic work Carpenter ever produced, it probably shouldn't be surprising that it winds up so defiantly hacky.  Typically, it's handsome and bland; almost as often, it's just boring filmmaking; and sometimes it's simply misjudged and lame—but at least this gives the movie the occasional spark of unintentional comedy. 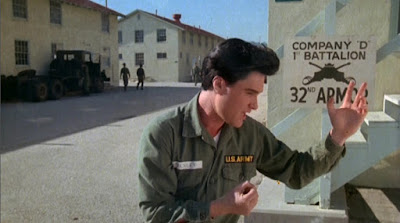 Like nothing else I've ever seen in my life does Anthony Lawrence's screenplay for Elvis embody the traditional sins of the biographical film.  For starters, it's unforgivably fucking long—there's a British TV cut that chops off the first hour of its intolerable 170 minutes, and I cannot imagine it is anything but better.  Despite this immense sprawl, scenes still wind up shockingly disconnected from one another, becoming a disorganized collection of anecdotes and things-that-happened, while Elvis seeks to relate the entire history of the performer, except for the really unpleasant (and hence presumably more interesting) later years.  It thus becomes a numbingly unfocused experience: whenever it does just barely manage to advance its core theme—there are several themes, really, but they all have their root in Elvis Presley's apparent inability to be happy with anything for too long—it honestly almost seems like an accident.  Most of the movie, unfortunately, is hagiographic garbage, assuming in every case that if Elvis was involved, it was worth putting in the movie.

The most representative scene is the part where Elvis meets Nick Adams, James Dean's sidekick and co-star in Rebel Without a Cause (latterly, he would go on to do a couple of awesome Japanese monster movies).  They chat for a while, discuss Dean's death and Nick's motorcycle, and Elvis cajoles him into walking across the set so he can meet Elvis' parents.  Then the Colonel happens to show up, to give Elvis some news—whereupon Nick is blocked out of the shot, is never introduced to Elvis' parents, never gets another line, and indeed he disappears from the movie altogether.  "Why is this here?" you shall bitterly ask. The film shall respond, with grave finality, "Because it occurred."

So densely packed with grinding minutia is Elvis that scarcely a glimmer of art can ever shine through its agglomeration of facts.  Only in the barest technical sense does Elvis bother offering its viewer a story.  So if you want a plot synopsis, read Presley's Wikipedia page.

But, hey, it was fact-checked by Priscilla Presley, so at least we know everything was accurate.  The darkly hilarious part, of course, is that you get the impression that Priscilla didn't know her husband better than anybody else.

(Incidentally, you have to love how Elvis buries its "child bride" lede.  You won't be explicitly reminded how old Priscilla was when their romance first blossomed—fourteen—but one imagines that must be why it only occupies about three minutes of the Goddamned film, since if they did linger on it, it would be fucking horrifying.  Or maybe it's because Season Hubley was 28, and despite her effort to play young Priscilla as "girly" I was compelled to assume she was at least, you know, post-pubescent.)

In its toxic longeurs, Elvis very gradually does take on a shape.  (That's why it's such a shame that the movie—which announces upfront an intention to explore the darker side of the dearly-departed icon by beginning at the ending, with the King blowing a hole through a TV with his snub-nosed revolver—very quickly flashes back to Elvis' childhood and early adulthood, where it does everything possible to trap Elvis within the halcyon glow of a truly brutal nostalgia.)  But finally—within one of the narrative ellipses that dominate Elvis—a switch is thrown.  He becomes unpleasant and domineering and depressed.  Why is he so frustrated and angry?  Anthony Lawrence has no idea and is unwilling to speculate, or even sit with it for any length of time (in this three hour movie).

But at least Elvis' rages offer something to chew on—if still not quite as much as his endlessly-creepy, albeit mostly-implied, oedpidal fixation upon his mother.  (And especially his mother's hair—which he terrifyingly tries to replicate in Priscilla, apparently the Underage Mom He Could Fuck.)  And probably the best parts of the whole movie involve his ghoulish conversations with his stillborn twin, Jesse Garon Presley.  Unfortunately, these amount to about fifteen minutes, or about 7% of the movie as presently constituted.

I don't have much choice but to judge Elvis harshly, since I rather fucking hated it; but I can impute some theoretical value to it in 1979, when his recent loss still would have been keenly felt by his fans.  Elvis is pitched squarely to this audience, and I suppose I must concede that perhaps it gave them something like what they wanted, namely, a celebration of his life and his music.

Elvis would be a lot shorter, of course, if it weren't for all those musical numbers. Sung for Russell by country musician Ronnie McDowell, they range the gamut of Presley's own output.  That means some of them are good, a couple are fantastic, and an awful lot are nothing more than blithe pop crap, the kind of thing you reckon must have been album filler, even though all the evidence suggests they were in fact popular songs.  Indeed, the very first song in Elvis, a ballad about a dead dog sung for his high school talent show, is so unacceptably anodyne that you fully expect this to be the part where the aspiring artist is viciously smacked down and forced to accept his own inexperience before improving.  (Of course, Elvis never needed to learn shit in this movie.  His audience leaps to its feet and begs for an encore.  Different strokes, I guess.)  Carpenter did (and does) understand music, however. He wisely lets the songs play to their natural conclusion.  These sequences aren't bad, even if there are too many of them; meanwhile, Kurt Russell is clearly having a blast with them.

Obviously, the most/only important thing about Elvis is that it introduced Carpenter to Russell, and in their future together there would be great movies—with superior lead performances.  As Elvis, sadly, Russell rarely goes beyond doing his best Elvis impersonation, and though it's pretty good as far as artless mimickry goes, he simply doesn't have a script that allows him to genuinely act for more than three or four minutes at a time.  (In fairness, when he does, he brings a broody Elvis that can be compelling.  The last time he talks to Jesse Garon, for example, is pretty great, despite—maybe because of—Carpenter's decision to shoot it with a crushingly obvious shadow metaphor.)  Maybe fittingly, Russell is at his best when he's on the stage.  He's high-energy, and that counts for something.  He makes the movie more genially watchable than it frankly ought to be.  One is permitted, however, to be awfully unsettled by the apparent fact that he doesn't age a day between 1952 and 1970.

Meanwhile, there's Shelley Winters as Elvis' mother Gladys, playing yet another variation on the dithering idiot mother that she played so well in Lolita and Night of the Hunter, except now with a cartoon Southern accent and the developmental disorder turned up to 11.  She's so film-breakingly obnoxious that when she gets deathly sick, rather than acquiring our sympathies, you feel somehow viscerally put-upon, as if you're the one who has to take her to hospital.  And this is a pity, too, when you consider that this was only five years after her career hit a renaissance, thanks to her amazing turn in The Poseidon Adventure.

Elvis would prove to be Carpenter's last adventure in broadcasting for many years.  Instead, with Halloween breaking records, Carpenter at last turned his full-time attention to feature films, making movies that he might've remotely given a shit about.  Elvis is a movie that I don't see how anyone could care about, and that it is competently-made at all is a testament to Carpenter's professionalism, and his enthusiasm for making any sort of movie, as long as he was making something.  But you get the feeling Carpenter eventually got just about as bored with this as I was.  So, can't we strike this one from the record?  Please?