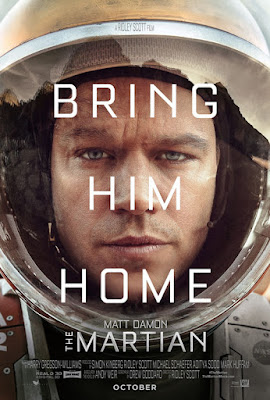 The Martian is STEM propaganda with an inhuman bent, but despite the weaknesses inherent in that description, it works.

In The Martian, NASA loses yet another expensive piece of machinery to the inhospitable environment of space.  This advanced probe, outfitted with a radical new adaptive artificial intelligence, is named Mark Watney, and is portrayed by Matt Damon, who very gamely depicts Mark's struggle to fulfill his programming.  Sometimes, however, he falls short of the total eradication of emotion that the role ideally requires.

Alternatively, The Martian is a film about the triumph of the human spirit over human relatability.  Till the very last lines of its baldly didactic denouement, I wasn't quite ready to connect with its message on any level but the most literal one possible, and the literal level at which The Martian works is broken.  But at this last possible moment, whereupon The Martian hollows out its hero entirely—leaving only Mark Watney, the symbol—I found myself filled with a brand new appreciation for the film's very real accomplishments.  Walking out of The Martian therefore left me with a curiously dissonant impression: the unalloyed optimism which ultimately made me like its characters more, and endeared me to The Martian's creators too, had also made the moviewatching experience itself substantially worse.

Based on Andy Weir's novel of the same name, The Martian's plot begins almost too quickly, with an expedition to Mars going horribly awry.  By the beginning of the very second minute, a sandstorm of apocalyptic scale has already overwhelmed the astronauts at Acidia Planitia.  By the beginning of the sixth, Mark's been injured and left for dead while his comrades make the long journey back home.

Of course, Mark is not dead.  Death certainly remains a distinct possibility, but after a touch of self-surgery and a much-needed nap, he gets to work on the heap of problems that constitute survival in an environment where (so we've been authoritatively told) life is impossible.  Mark's existence is soon narrowed into a single, sharp point: a quest for food, water, air, heat, and mobility.  If this predicament seriously upsets him, we are given precious few clues; but we do believe him when he says he'd still prefer to get back to Earth.  Eventually, he is able to reestablish contact with the human race.  At this point, The Martian turns its attention to even harder problems: overcoming the scientific and engineering obstacles inherent to rescuing a man stranded about 400 million miles away.

Whereas any problems that are not related to science and engineering are ignored.  (And ones that are related, but insoluble—like the physiological effects of reduced Martian gravity and Mars' missing magnetosphere—just get glossed right over.)  Numbers necessarily play their part in the hurricane of STEM that comprises The Martian's screenplay, but one number that's never brought up is the exact cost of NASA's attempts to save our man on Mars.


The casting of Mark's fellow astronauts leaves little doubt that The Martian will eventually involve a return mission.  But once we do come back to Commander Lewis and her gallant crew, it gives decisively short shrift even to the single moral calculus that it does seem comfortable discussing.  With the prospect of risking six lives for one on the table, The Martian spends maybe sixty whole seconds engaging with this dramatic dilemma before burning through its interest, closing the matter with some of the most heroically inert unanimity ever witnessed on a movie screen.  The hard-nosed bureaucrats back at NASA, particularly Jeff Daniels' Teddy Sanders and Chiwetel Ejiofor's Vincent Kapoor, wind up vaguely antagonistic by mere default—because their lavish rescue plans aren't quite as bold or foolhardy.

The Martian remains a basically pleasurable film, digging as deep into the procedural elements of survival as any movie about a stranded astronaut would dare.  The high point, both in terms of cleverness and respect for the audience's intelligence, involves both hexadecimals and an explanation that is so tossed off that if you didn't already know what was happening (and why), you probably still wouldn't have much of a clue after Matt Damon throws some jargon your way.  Yet there's a certain convenience to much of The Martian.  The obvious thrust of the film may be the infinite majesty of human reason; and, indeed, as a showcase of ingenuity and perseverance, it is very nearly beyond reproach.  However, we must remain a little skeptical about the general applicability of that lesson, when Mark's rescue plan depends on a universe so finely-tuned in its astronomical details that all it really proves is that Mark's finer qualities make him more appealing to his authors.  In The Martian, God really does help those who help themselves.

Mark does experience a few setbacks, but the dogged pace never lets any of them really land.  The curse of The Martian is its pathologically chipper hero—Mark's upbeat personality is relentlessly insisted-upon throughout, notably by a few too many expository video logs.  Mark's story skips merrily from plot point to plot point, even though there are sometimes dozens of days between them.  You'd think this should be time enough for Mark to intensely feel his longing for home—and with a runtime of 142 minutes, you'd likewise think The Martian could spare a few to watch him feel it.  You wouldn't be exactly wrong about that; but even Mark's darkest moments wind up buried beneath some manner of more-or-less effective humor.

At times, Mark can be just too much.  I've gotten angrier about dropping a bowl of cereal than Mark gets when a disaster wipes out his only source of food.  (In a closely subsequent scene, Mark chats with a fellow astronaut who jokes that they left him on Mars because they didn't like him.  Why must the two words that best describe The Martian be "low affect"?)  Meanwhile, the structure shares the blame for the film's notable lack of gravity—when Drew Goddard's screenplay already refuses to offer much of a psychological component to Mark's isolation, our distance is only compounded by constantly cutting back to Earth.  After The Martian's first phase, even basic cinematic signifiers of "loneliness" are lost.  The cross-cutting between the two reference frames becomes altogether frantic as the film approaches its climax—and this sits very uneasily alongside the 12 light minutes that lay between Mars and Earth.  Though I can't say exactly what it was I wanted, I keep thinking there must have been something formally interesting that could have been made out of the delay.  Yet, in this regard, as in many others, The Martian is almost affrontively boilerplate.

At both the beginning and the end, several interesting possibilities present themselves, but The Martian adeptly avoids all possibilities but the most predictable. The result, we have to admit, is the most crowd-pleasing film Ridley Scott's made since Gladiator; but even Gladiator was allowed to be more unexpected and adventurous.  The most unlikely choice Scott ever makes in the whole film is when the obligatory montage set to a David Bowie song comes, he chooses "Starman."  And this is probably less because "Space Oddity" has been overplayed, or even because "Life on Mars" was a little too-on-the-nose, than it is because those songs would have contrasted too much in the great depth of their feeling when set against The Martian's shallowness.

Nonetheless, even after all these years, Scott's never lost his eye for a pretty picture.  However fitfully, The Martian takes as good advantage of the Red Planet as any film since Total Recall (I can't complain about its indistinguishability from Utah this time).  But the elegiac beauty of outer space has been excised.  In that conversation with his profoundly dickish buddy, Mark ends by noting how he often goes out to gaze upon the Martian vista—just because he can.  The viewer will note, of course, that there has not been a sequence where we've seen Mark actually do this—and indeed, you can count on one hand the scenes where we even begin to suspect Mark might be contemplating either the stark emptiness of his existence or the miraculous uniqueness of his situation.  But maybe I should be crediting Scott, rather than accusing him.  After all, he's achieved a formal trick that may not do his film the slightest aesthetic favors, but advances the central tenet of its program forcefully.  The usual space castaway picture would attempt to underscore the abject insignificance of the human life in question.  In The Martian, the human is the only significance there is.

Let's give more credit, however, to Damon, whose face sometimes communicates the pain that the script actively denies.  If Damon never really finds a happy medium between Mark's Genuine People Personality and the bugnut insanity of his last space cowboy, at least you can see him try.  The results of his work are vastly less resonant than, for example, Sandra Bullock's or Sam Rockwell's—you could argue that Joel Hodgson and Mike Nelson offered more nuanced reactions to being shot into space, and barely be kidding—but you have to admit that Damon has a harder job than any of them, which is granting a living personality to Goddard and Weir's Performer of Tasks.  It's a duty which Scott makes even more difficult still, by giving him nearly no space to do it in.  (Of course, like every Ridley Scott movie since time immemorial, one imagines there is a longer cut that's better.)  That Damon manages to do anything with Mark at all under such circumstances must be counted as an achievement.

The rest of the star-studded cast, however, suffers beneath the anti-characterization of Goddard's script.  Perhaps the actor most lost in the haze is poor Donald Glover, who copies and pastes his performance as a NASA wunderkind directly from that episode of Community where his character Troy switches personalities with his best bud Abed, a live-action cartoon character made of comedic autism.  (But seriously, if Scott wanted Danny Pudi, why didn't he just hire Danny Pudi?)

But at least Glover's memorable.  Everyone else—and sadly this does include Damon for large stretches—is merely flattened into Goddard's sub-Whedonian idiom.  You start to wonder why such big stars were attracted to the project in the first place, when the most acting they ever get to do is pretend to hold opinions about disco music or Lord of the Rings.  Yet the ultimate (and cumulative) effect of The Martiani's half-assed banter is an embracing verisimilitude.  It's the exact kind of co-worker interplay that populates offices all across the world, where everybody thinks they're funny—and maybe one time in five, they're actually right.  I eventually found myself charmed by it, somewhat against my will, though I was very worried it wasn't a deliberate strategy on Goddard's part—that is, right up until Goddard has Mark spend three delightfully excruciating minutes explaining an objectively awful "space pirate" joke before he even utters it.

Obviously, things like this—let alone things like direct references to Iron Man, made in the midst the film's very climax—all but eviscerate The Martian pretensions toward any timelessly epic quality.  But, then, if they'd sent a poet, I guess the poet would already be dead.