John Carpenter, part I: In space, no one can hear you... surf? 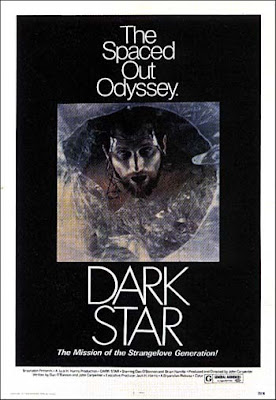 Sure, there's something going on here, but there's a reason why most student films aren't released to general audiences.

You can't really say that John Carpenter is an underrated filmmaker.  An underemployed filmmaker?  Sadly, yes.  But not underrated.

This, I think, is a recent change: go back thirty years, and the only people talking about Carpenter are horror nerds—and for the most part, what they're talking about is Halloween, while Carpenter never really built for himself much of a truly personal fanbase, at least not in time to support him through his subsequent decade of low-budget successes and higher-budget bombs.  Flash forward to twenty years ago, and The Thing and Big Trouble in Little China have each been revived on video, while Escape From New York's cult following has only grown—and, still, nobody's rushing out to see In the Mouth of Madness.   But by ten years ago, a whole new generation has risen—critics and audiences who grew up on Carpenter's elevated B-movies, who couldn't bring themselves to deny them if they tried.  And that brings us right back to the present, where Carpenter is—at long last—recognized as one of the great living directors.  Now, he makes everybody's list.  (And ain't it sweet of you to ask?  Number three—right after De Palma and Spielberg.)  John Carpenter, today, is rated exactly where he should be.  His individual films, of course, are both under- and overrated with abandon; but we'll get to those in due course.

Since Carpenter is probably as responsible as any one person could be for the state of affairs we now find ourselves in, wherein Halloween has swallowed up the whole month of October, it seems appropriate that we use this month to turn our gaze upon Carpenter's body of work—both within the horror genre and without, for (after all) he was and remains a filmmaker of varied interests and many skills.  So let's take a look at Dark Star—Carpenter's very first feature-length film.

Of course, Dark Star didn't begin that way.  It started as Carpenter's student film, and when he took it on the festival circuit in 1973, the sci-fi comedy was received as a fascinating curio, impressing producer Jack Harris so much that he bought the distribution rights.  At Harris' behest (and to Carpenter's later chagrin), the director added enough new material to push it to 70 minutes, and by the spring of 1974, Dark Star was as ready as it would ever get.  Harris thus scheduled it for a theatrical release... where it was met by its audience with a nearly-unanimous confusion that shaded right into genuine hostility.  Personally, I'm baffled that anybody involved could've been even the tiniest bit surprised. 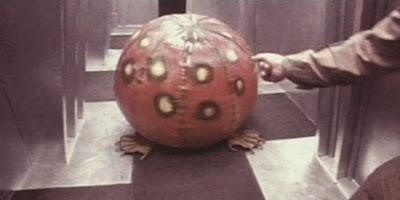 What, this flopped?  You jest!

It would be an unbearably unpleasant way to start out a John Carpenter retrospective with the flat declaration that the most interesting thing about his first movie is its connection to other, better movies.  But, as you know, I'm an unbearably unpleasant person.  Anyway, it's also demonstrably true: besides serving as Carpenter's trial by fire, Dark Star famously represents the first draft of co-writer Dan O'Bannon's script for no less a film than Alien.  The '79 classic expands upon a vignette from the first act of Dark Star, only playing it for horror rather than for humor.  (As O'Bannon said, "If I can't make them laugh, then maybe I can make them scream."  And so he could.)  Yet even beyond Carpenter and O'Bannon's own careers, you have to take account of that small fraction of the audience—damaged humans all, I suppose—for whom Dark Star was not just a source of joy, but inspiration.  Without Dark Star, Doug Naylor might not have ever conceived of Red Dwarf.  Without Dark Star, I imagine Burnie Burns still probably would've made Red vs. Blue—but would you want to risk it?

Dark Star is the story, fittingly enough, of the Dark Star, a deep-space scout ship tasked with clearing distant star systems of dangerous rogue planets with globe-shattering thermostellar bombs.  Waging this lonely war against cosmic rocks is a crew of four lonely men: Doolittle, the commander, a mean and melancholy sort; Boiler, a more temperamental type of bully; Pinback, a sensitive fellow; and Talby, a loner who sits in the observation post atop the ship for days on end, gazing mystically into depths of outer space.  At one point, there were five men on the Dark Star.  However, Commander Powell's been dead for a long time.  Rounding out the crew is an ambiguously-sapient Computer, with its theoretically-soothing female voice.  Finally, there's an alien on the ship, too.  Captured years earlier and held in captivity as a "mascot"—or disfavored pet—when it gets out, things really start to go wrong.

But it's a very slow-motion kind of going-wrong.  What Dark Star is really about isn't a xenomorphic infestation, but the existential struggle against a more insidious enemy—entropy itself.  Alone for three subjective years now in their relativistically-isolated and impossibly-cramped closed system, it's only a matter of time before things fall completely apart aboard the Dark Star.  Indeed, by the time we get to them, they basically already have.  The commander's gone, large parts of the ship aren't functional, and their superiors back on Earth clearly don't give the first shit about them—even to the point where it direly impacts their job.  And the men aren't doing much better than their ship.  You get the sense that in an ordinary office, they'd be just fine, but they are emphatically not the stuff that pioneers are made of.  The alien's accidental release isn't scary, but rather (nominally) comedic; yet it leads to a chain of events that finally pushes the disorder of the crew's existence past the point of no return.

And yes, the best way to describe far too much of Dark Star's humor is "nominal."  (Part of the reason for its obliteration at the box office was that Jack Harris, apparently an idiot, marketed it as serious, sober sci-fi, but I doubt it would've done that much better as an explicitly-avowed comedy.)  It's not really a parody of anything specific, though of course it stinks of 2001: A Space Odyssey's influence.  And this is perhaps unfortunate, since 2001 cost some tens of millions of dollars, whereas Dark Star cost some tens of thousands of pennies, and hence Dark Star looks like children playing with garbage.  In fact, it's actively assaultive, indulging in 2001-esque lightshow tactics right out of the gate—except done extremely badly.  There's a flickering brutality to Dark Star's opticial effects that would trigger, in anyone so afflicted, a positive epileptic fit.  And this is all before the opening credits have even rolled.  The first half hour of Dark Star—culminating in the release of the alien, a giant organic balloon with ineffectual claw-hands, which plays even more stupidly than it already must sound—is probably enough to burn up any general goodwill toward the enterprise, except perhaps for the least-discriminating SF-heads or the biggest JC fanboys.  (For my part, I tried to watch Dark Star once already, about three years ago, and it was at this point that I just gave the fuck up.)  The effects are O'Bannon's, like a lot of things in this movie; and even grading it on a low-budget curve, they are a dismal failure.

Meanwhile, Carpenter's direction—especially at the outset—is frankly too effective at pushing the bleakness that underlies Dark Star's comedy.  Between O'Bannon's distressingly-small sets (he was also the production designer), the 16mm filmstock that (to steal a phrase) looks like everybody's last known photo, and some extremely technically-accomplished mise-en-scene that makes everything so Goddamned close, especially the crew, what Dark Star amounts to is one of the most physical experiences of cinematic claustrophobia I've had in a long, long while.  (And I watched The Descent again just yesterday, for Christ's sake.) Dark Star feels like a prison movie half the time, but even the nastiest sci-fi prison planet would still look like a nicer place to live.

Not that Dark Star would have been too amusing, even without every formal element conspiring against it.  The amateur actors, including O'Bannon (he also co-stars), dribble all their lines without the slightest notion of how to elicit a laugh, and the dialogue track is replete with redubbed reads that aren't any better, while also making every conversation feel like it's actually happening somewhere else.  With the actors all ineffectually gumming O'Bannon's words, you wind up paying close attention to the dialogue's actual content, realizing how very badly they're screwing up O'Bannon's attempts at sub-Hitchhiker Space Whimsy.  (Must Douglas Adams himself be added to the list of weirdos influenced by Dark Star?  I don't know if he even could have seen it, but his radio show didn't hit the airwaves till four years later, and the general shape of the humor is shockingly similar—unmistakably so, when it comes to Dark Star's own neurotic AI.)  Lastly, O'Bannon's cutting might not be completely amateurish (yes, he also edited, and I think that's finally it); but certainly Dark Star's editing scheme lacks any particular sense of comic timing.  All told, Dark Star is largely just too raw and unlikeable to be enjoyed even as a MST3K-ready goof.  The fact that it's trying to be funny probably just makes it worse.

But then, with twenty minutes left to go—maybe even less—the film turns right around and comes awfully close to complete and total redemption.  The acting never becomes good, but you sense that this thing was shot in script order: eventually, the cast seems to have memorized their lines sufficiently to also deliver something resembling believable emotion while reading them.  (This is known in technical acting circles as "a performance.")  It's not hard to pinpoint when Dark Star finally gets good, either: it's when Doolittle checks in with Commander Powell, who (it turns out) is just mostly dead.  With this turn—in the midst of a confrontation with a very stubborn artificially-intelligent bomb—Dark Star at last finds its compass, finally hitting the precise tone of absurdity that it's spent an hour groping around for.  Suddenly, it becomes very clever and very funny—and even a little bit moving, too, once you adjust for the visuals that do not in any sense support a legitimate sense of wonder.  (Maybe the film was written in script order.)

There are other compensations to Dark Star, too, and I suppose they must push it over the hump.  A certain sequence in an elevator, filmed after Harris picked Dark Star up for theatrical release, presages Carpenter's thriller craftsmanship.  The sight of Powell in his crypt suggests that, O'Bannon's godawful effects aside, Carpenter had an eye for unsettling imagery (and perhaps a particular affinity for creepy things found in ice, as well as in sealed casks).  And above everything, of course, is Carpenter's first film score—a rather good score in its own right, on top of a very potent sign of the musical genius that he was already rapidly becoming.

In sum, Dark Star kind of sucks.  It's probably only completely worthwhile for the Carpenter completist or, perhaps, the fan of Red Dwarf, who wants to see from whence its premise came.  And yet there's a strength to so many of Dark Star's sci-fi satire ideas, and a forcefulness to its climax, that—while not enough to ever recommend it to anyone—allow us to avoid not recommending it, too.