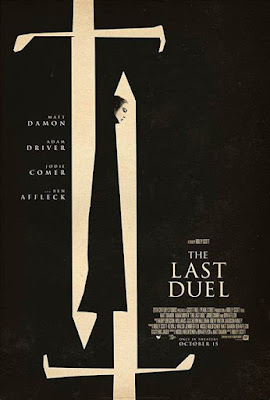 THE LAST DUEL
2021
Directed by Ridley Scott
Written by Matt Damon, Ben Affleck, and Nicole Holofcener (based on the book The Last Duel: A True Story of Trial By Combat In Medieval France by Eric Jager)
Spoiler alert: pretty much inapplicable, but I don't say who dies!

So, my complaint about The Last Duel... actually, my complaint is that it's a 21st Century Ridley Scott Period Piece (by which I mean, a Ridley Scott Period Piece made in the 21st century, not Blade Runner).  I generally like Ridley Scott Period Pieces—Gladiator is about as good as history-optional Roman times sword-and-sandalry gets, and Kingdom of Heaven, now fully rehabilitated as a minor classic, is probably as good as hand-wringing movies about Crusaders and religious extremism get—but The Last Duel really leans into all of its filmmaker's most unlikeable fixed ideas, this time to the point of diminished returns; it is, I'm almost certain, the utmost expression of the always-kind-of-annoying geographic zoning in the color correction that Scott's habitually enforced upon all his poor cinematographers (usually John Mathieson in the aughts, and usually Dariusz Wolski these days), so that anything north of the 40th parallel is "blue" and anything below "yellow," though in The Last Duel we don't ever leave France, except to go to Scotland.
It's probably not substantially "worse" than Mathieson's similar rendition of France in Kingdom of Heaven, or Germany in Gladiator, except in those movies we only spend about half an hour in Northern Europe before getting to the Levant or Italy, and therefore to "yellow," and frankly Scott Yellow is simply much nicer to look at than Scott Blue.  (Counterpoint: Wolski's Exodus: Gods and Kings.  But still, nicer.)  Scott Yellow at least allows other colors to exist, and generally feels like a mood rather than an imposition.  Scott Blue, this time around, is an endless miasma, a milky blue-gray haze, and so while there are some very occasional interesting interactions of tawny firelight and the blue treatment that Scott's decided to use in, more or less, every last frame of a 153 mintue film, what it resembles more than anything is just bad day-for-night shooting, and if that sounds fittingly dreary—it's the whole Medieval Times notion he's going for, after all—it's also drearily tiresome.  I mean, it's generally well composed: if Scott wants to make a movie in monochrome, could somebody tell him that black-and-white photography still exists?  That's probably too much to ask for a movie oft-described as "big-budget" (though I can't find a budget for it, and it doesn't really look big-budget, with most of its story taking place in, like, rooms, or else in front of still-extant medieval buildings); but if we can't do this in black-and-white, and Scott won't consent to doing it in actual color, can we at least cut the line where a character is described as having picked up a tan on a planet that appears to be in orbit around a dying star?
My other big complaint is not nearly so big, and I don't want you to think this makes The Last Duel "bad," though it does lock its story onto precisely one inescapable path, and everyone involved seems perversely proud of how little you need to even watch the thing in order to "get" it.  I probably overuse the adjective, "schematic," and I don't always mean that negatively, but this time I mean it in a purely denotative sense, for The Last Duel, based on Eric Jager's pop history of the last judicial duel in France, really was constructed as a writing exercise in perspective and gender between its screenplay's three authors, Matt Damon, Ben Affleck, and Nicole Holofcener.  The movie's a triptych about the lot of women in the Middle Ages and, more to the point, the lot of women today, and they've made a big show about how they split up the screenplay between them, each sticking mainly to their own sections which, in turn, each take on the particular point-of-view of one of their central characters.
It's not unlike Rashomon, said the critic who can only write in tired clichés, though it's unlike Rashomon in that it actually is about subjectivity—well, sort of, but hold on—and also because, rather surprisingly, it doesn't use the framing narrative of a trial, despite the whole film being, in its alienating, medieval way, a legal procedural.  It doesn't use any framing narrative at all, in fact, besides a flash-forward prologue that exists just to remind you that eventually two dudes in armor are going to get around to wailing on each other, and when we get back to it there's no sense that we're seeing this through any other eyes than those of Ridley Scott, Hollywood's premier pummeler of dudes in armor.  Otherwise, it presents its anthology of perspective as one "take" after the other, not as stories being told to some audience, and therefore subject to conscious manipulation, but presumably "objective" in the sense that each one is what its story's participants objectively believe happened.

That it works so well in this mode is a testament to the performances—I honestly hate to say it—of the men, especially Damon, who's required to range the most across the three segments while still maintaining the same "objective" core of his character as a slow-witted dolt prone to rages; remarkably, Jean's a more sympathetic character as seen through Jacques's eyes than he is when he's painted with his own ego-soothing self-regard, because Jacques sees him, uncut, unedited, and unpolished, as everybody else sees him, an inarticulate and inflexible squarehead barely capable of getting through a sentence without sputtering incoherently, and so pitifully insecure that he can't even insist upon his dignity without automatically losing it.
As for Driver, he's entered the Scarlett Johansson In the Early 10s phase of his career, actively pushing back against his status as a hot celebrity by using "hot celebrity" as a blind, taking on gross, ugly roles that, besides simply allowing him to ply his craft as a serious actor, might finally get people to stop fantasizing about him sexually; the short version is he's sickeningly credible as a man who believes he effectively can't rape people, because they're always willing.  Affleck, meanwhile, is soaking up all the actual attention, because people are idiots easily distracted by shiny hair; but he is the showboat here, and Pierre is such an insufferable evocation of privilege that he wheels back around to being funny, like the bully in an 80s film.  It's a great performance anyway, and one that leavens a picture that otherwise can only find joy in violence.  (Which isn't a bad thing: Lawther's king's freakish enthusiasm for the duel is also a blast.)  And Comer is...
Comer is, at least, perfectly okay in a saintly Victim of Everything role that allows "being raped and oppressed" to be more-or-less the entire character.  Actually, she's perfectly great in Jacques's segment, which requires her to tint Jacques's perception of a winking attraction to the squire with the "real" character's underlying disquiet and disgust.  But Jean's segment has very little to offer her, and then we get to segment 3, which only has a more defined single dimension for her to play.  Yet even so, I'm actually not sure if Holofcener isn't outsmarting everybody on this one.
So, "the truth" notwithstanding, she might very well be extending to Marguerite the same tendency people have towards making themselves the hero of their own story, just like Damon and Affleck are much more obviously doing with Jean and Jacques.  There's a faint sense that Holofcener could be mocking, for example, Marguerite's girlboss satisfaction over being able to read, count, and successfully oversee an estate on which her husband's serfs do all the actual labor; it's possible she might even be poking gingerly at the limitations of self-righteousness in a nasty, barbaric world, explaining how Marguerite remains devoid of much convolution till she finally figures out that her rape has been exploited by her dumbshit husband for his own agenda.  On the other hand, all the irritating stuff is in segment 3, not least the repeated insistence that in the middle ages people believed women simply weren't capable of conception unless they liked the sex, whereupon Holofcener evidently had to stop herself from just typing out "the body has a way of shutting that down" without alteration.  The first two segments aren't sinless, but they don't so blatantly roll their eyes (and even when they do veer into anachronism, when Affleck's its vehicle, it feels more appropriate, as he almost comes off like a time traveler returned to enjoy a more robust patriarchy anyway).  Well, all along, The Last Duel's grappled with one big inherent handicap.  By design, its characters can only ever be props in each others' stories; but Marguerite's a prop in her own, and if that's intentional, that's terribly interesting.  Probably, it's not.
Score: 7/10
Posted by Hunter Allen at 1:46 AM