Census Bloodbath: For Christ's sake, spare me the speech! I've listened to it for a decade 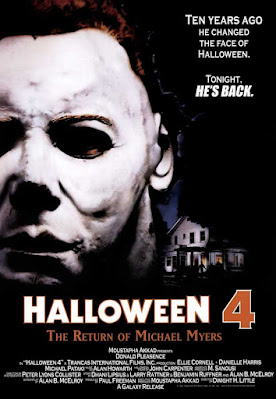 The Eighth (oh God) Annual Great October Switcheroo!  Once again, we're crossing over with the wonderful Brennan Klein of Popcorn Culture and sometimes Alternate Ending, and I'm doing some of the 80s slashers he's catalogued as part of his Census Bloodbath project, while he's doing some of the old-timey sci-fi I've been hoarding as part of my own Cardboard Science archive.  This year, he finally gave me three pieces of the slasher genre's major arcana, such as I've been very subtly and surreptitiously hinting that I'd like to do this whole time; in return, I accidentally gave him three pieces of indecent crap.  Oops!  (But, seriously, apologies.)
HALLOWEEN 4: THE RETURN OF MICHAEL MYERS
1988
Directed by Dwight H. Little
Written by Alan B. McElroy, Danny Lipsius, Larry Rattner, and Benhamin Ruffner
Spoiler alert: moderate 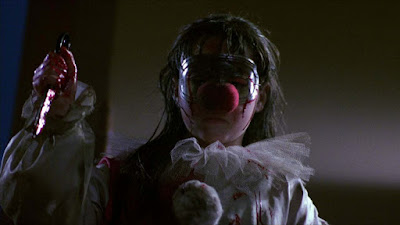 I always open these by mentioning, almost as a form of shameful disclosure, that I am possibly John Carpenter's Halloween's smallest fan.  That is, I am a fan, but love it only for confirming the slasher film as a niche to be viciously exploited over the next several years, a niche that produced a great many more interesting elaborations on the fairy tale blankness of Michael Myers.  Indeed, Halloween, the franchise, has been the source of some of the best of them.  So even without special reference to the ur-text of the 1978 film, the series as a whole has remained, to me, the gold standard by which all dead teenager movies must be judged.  Even when it wasn't about dead teenagers at all, but instead a horny old man solving the mystery of an evil version of Halloween Express.
Of course, that's Halloween III: The Season of the Witch, the weird one, and that weirdness—even for 80s horror!—cannot be overstated.  It was considered a failure, and though it made decent money (of course, without the name, it wouldn't have), it was roundly despised by the series faithful, who rejected John Carpenter and Debra Hill's new direction and commanded them to return to the saga of the Myers family, Halloween II having established a certain sibling rivalry as the heart of the Halloween mythos roughly ten or fifteen minutes before ending the franchise with a giant explosion that killed its two main characters besides Laurie Strode, Michael and Dr. Loomis. 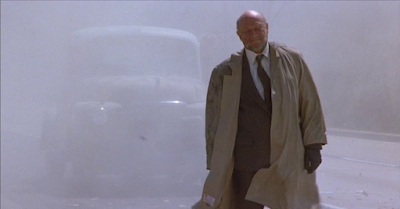 It's hard to feel too bad for Carpenter in this regard, as it's not like it was the last time he ever got to write a horror movie about the world coming to an end from an unexpected place, and I'm sure I've mentioned before that Season of the Witch is absolutely better understood as an unsung addition to his informal Apocalypse Trilogy than a tangent to the Halloween series—but in any case, they spent several years at loggerheads with the moneyman, Moustapha Akkad, about the course-correction he'd demanded, till eventually they simply sold him the franchise, never to return till Carpenter offered his sonic support to what amounts to a third version of Halloween II.
After a significant lapse, this process finally led to Halloween 4: The Return of Michael Myers in 1988, right around the time the slasher movement and 80s horror in general was winding down, and evidently vindicating Akkad when it made a whole three million more nominal dollars than Season of the Witch.  The triviality I can't help but fix on is the switch from the series' now-traditional Roman numerals to a regular old Indo-Arabic "4."  Somehow that indicates to me the vastly reduced ambition of the whole exercise, the leveling of a franchise that had been capable of baroque nightmarescapes and absurd conspiracies to merely the warmest remaining porridge of its subgenre.  Confirmation comes swiftly when Halloween 4 abandons the franchise's custom of an opening credits sequence centered around a jack-o-lantern and Carpenter's all-time great Halloween theme.  (The score comes courtesy Carpenter's frequent collaborator, Alan Howarth, but it's disappointingly sparse, and when it is there it's almost entirely just throwing the Carpenter theme at the thrill sequences.)  Well, perhaps there are only so many interesting ways to portentously zoom in on a pumpkin, but still. 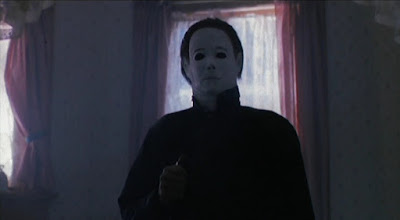 Instead we get a silent montage of Haddonfield, IL, tilted slightly toward an impression of rural decay, with a bunch of fairly well-shot, fairly creepy Halloween decorations; the onscreen credits are at least still the same aggressive shade of orange.  They're quick, however, and soon we find ourselves on a rainy October 30 evening, where a fistful of exposition apprises us that Michael Myers (George P. Wilbur plus Tom Morga) wasn't really killed, only badly burned and sent into a coma.  For reasons that I assume amount to "setting this in 1978 or 1979 would be more effort than we wished to expend upon this very easy film," Michael has been in this coma for the full decade, and, tonight, his lifeless body is to be moved from one sanitarium to another.  Yet some of that exposition penetrates Michael's head regardless.  Upon hearing that his secret sister Laurie died in car accident but, before that, bore a daughter, Michael awakes, determining that October 31 shall be the night he came home, again.  It is not, of course, really explained why if coming back to life was always possible, Michael allowed some random car to snuff Laurie for him, besides the basic but unsatisfying fact that they didn't make any Halloweens between 1982 and now and Jamie Lee Curtis clearly wasn't going to be in this one.
In any event, Michael fakes his death by crashing the ambulance, leaving every credulous local authority more annoyed with the killer's long-suffering, badly-scarred, but equally-not-dead enemy, Dr. Loomis (Donald Pleasance), than they are with the escaped mass-murderer.  The former keeps shrilly insisting that Michael's NOT DEAD and NOT A MAN and PURE EVIL, in his manner—these may not be verbatim quotes, but probably are—and if he does so in a much more hushed and weary register than he did as a somewhat younger man, when his constant vigil had only taken twenty years of his life, and not thirty, then certainly Loomis's protestations are not so hushed or weary that I would feel I've conveyed them accurately in anything less strident than full capslock.
In Haddonfield, we catch up with Laurie's daughter, Jamie Doyle (Danielle Harris), presently fostered by the Carruthers family.  Her presence has somewhat cramped the style of the Carruthers' daughter, Rachel (Ellie Cornell), but Rachel has an obvious soft spot for her foster sibling, which would be easy enough because Jamie is pitiable in many respects even beyond a dead mom, from the way her peers have taken their 80s kid bullying to an unprecedented level of psychological cruelty, to the way that she's tormented by visions of her uncle.  Rachel has her own problems, attempting to navigate her horny teenaged world, but she's assigned, nonetheless, to take care of Jamie this Halloween night.  Thus she becomes the only thing between Michael's quest to annihilate the Myers family and the sister that, beneath her annoyance, she's grown to love. 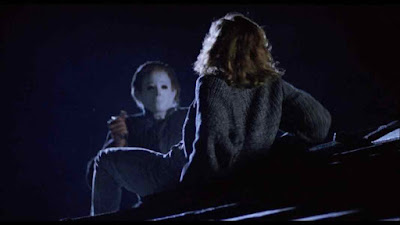 More than in any other respect, this is where Halloween 4 manages to mix up its formula, something Akkad was allergic to in general at this stage of the franchise (when Carpenter and Hill were still around, he'd rejected a screenplay from Dennis Etchison that purported to explore the psychic toll on Haddonfield as a town that had outlawed Halloween, and frankly I expect he was right to do so), and clearly the inspiration was "it's ten years later, so what now?"  But the substitution of a small child and her older sister as a composite Final Girl is a dynamic not frequently seen in slashers, and it's where nearly all of the more honorable points of recommendation for the film lie.
Not least that's because Harris is somehow far and away the film's best non-Pleasance actor, imbuing the role with a certain strange precocity—I'm particularly struck by her read of "you're okay, you're okay" to herself in the aftermath of a particular nasty bullying incident, done with the self-awareness and emotional nuance of a much older child, and I'm not sure how the little girl quite managed it—and she's also, in a walk, the actor most convincingly portraying "unreasoning fright" and "animal terror" in this movie about a Terminator in a William Shatner mask unstoppably murdering virtually every person he sees.  Cornell, by contrast, is merely fine—she has a lot of business with her peers—but Harris even helps elevate her adult co-star's performance by giving her such a specific and sympathetic relationship to focus on.  The upshot is that basically any scene with Jamie in it is good, and any scene with Jamie and Michael in it—either the real Michael, or her visions of him—is legitimately scary.  And that's testament to Harris's strong performance, because there is no way in hell even an 80s slasher would have the sheer guts required to have actually killed Jamie and reorient this story as Rachel's revenge thriller, though we might be dealing with something truly unique if it had.
This leaves the... I will not say the "dishonorable" pleasures, but instead the "traditional comforts" of a Halloween film.  Foremost, there's Pleasance, perhaps not too terribly keen on returning to his signature role, though if he'd gotten bored with Loomis, that feeds into the good doctor's general sense of exhaustion and malaise that affords, for example, his oddball throwaway scenes of hitchhiking back to Haddonfield, involving getting punked by shitty teens and helped by an apocalyptic Bible-thumper who mirrors his own worldview, a certain poignancy, even letting them rise to the level of "texture" when truthfully they were almost certainly intended as "filler."  (I also very much love the scene where he almost gets Michael, and Michael blows up a gas station on him, because it is totally rad.)  Mostly, of course, it's just that it's still just a blast to listen to Pleasance shriek at people who, at this point, are being willfully naive, and the final line of the film ("NO NO NO NO NOAWWW") is maybe my single favorite Loomis moment. 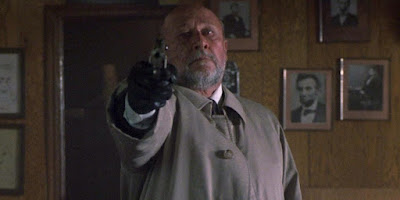