At the Gates of Hel, I will meet you 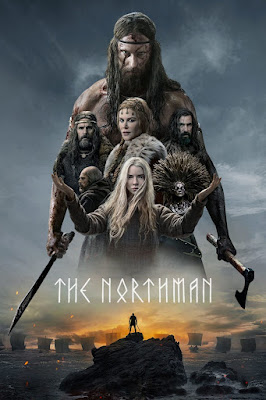 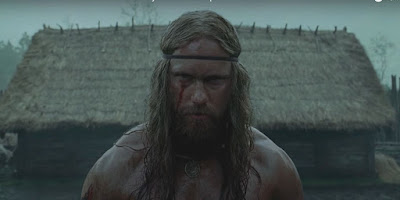 Everything in the film is built around this shamanistic pagan mindset, giving us witness to signs and symbols and, often, literal divine beings, pushing us towards the same exact inability to distinguish the natural and supernatural.  The Northman is filled with what I suppose you could call "a score" by Robin Carolan and Sebastian Gainsborough, that's about as aggressive as a film score can get, borderline-tuneless noise and unintelligible choral throat-singing, like a dirge coming from under the earth, savage hymns raised up high enough in the sound mix to feel like a constant oppressive force; against this otherworldly soundscape is set the weird unreality of the landscapes (particularly in the Icelandic phase of the film).  Only slightly more subtly, Eggers's visual scheme lands with a decided emphasis on straight lines, frequent tracking shots implacably moving on single axes with unyielding stiffness, so that even when they "turn" it's from one sharp angle to another equally sharp angle.  That's suggestive of "fate" moving Amleth on his appointed path, in the way the script is pretty much explicit about it, and I don't know if it absolutely needs to be more sophisticated than that, but while it's hard to gauge from a single viewing, it feels like this lets up more in the back half of the film, when he's on the precipice of attaining his revenge, and begins to wonder that just because he must, if he also should.  (The tightening up could come here, I guess, but I wouldn't trade it; you could "tighten up" Hamlet by a considerably greater margin, after all.)
And this is on top of the overbearing sheerness of the setting and the tactility of it, particularly the use of as much practical light as possible, so that nighttime is often as dark as the old stories make it, barely held at bay by firelit haze.  It is, also, extremely metal, and while it's art-adjacent and all, it's told in relatively short sentences frequently punctuated with exclamation points of very nasty violence.  Arguably not enough violence, or maybe just underemphasized violence, and Jarin Blaschke's photography and the bloody action are the two things you could quibble with.  The former is a little overdetermined in ways less interesting than everything else is overdetermined, unfortunately establishing that every single day in Iceland, Denmark, and Russia is ten seconds away from a rainstorm in the manner that every single motion picture going for "dour" does nowadays (this was thrown into sharper relief by a viewing of the ur-Northman, The Vikings, which gets a fair amount of mileage out of the tension between raping and reiving Vikings and sunny fields full of flowers); this is more than made up for by the night photography, which isn't always "naturalistic," in that naturalism would be unreadable, but is defined by smoky murk or a simulacrum of moonlight so silver the movie goes black-and-white for scenes at a time.  (I am likewise impressed by the silent film lensing in some of Amleth's visions.)  The latter, that violence, is often unwilling to exult in savagery, sometimes even when it should: it's tilted toward cold observation, which is a fairer choice for a slave raid than it is for Amleth headbutting a man into oblivion more-or-less offscreen, or the glimpsed array of body parts Amleth leaves his uncle under the guise of a lupine spirit; of course, this is far more than made up for by that Goddamn duel atop an erupting volcano, and much more besides (not least Amleth's combat for a mystic sword, which, in being hard to read as anything besides avowed reference to Conan the Barbarian, belies all the fun Eggers had to have been having here regardless of how severe and serious it all is).
But it's as much Skarsgard's movie—this is true in a literal sense, as they share producer credits—and the film originated with Skarsgard, who'd been fishing around for something Viking going on a decade.  The Northman was always destined to wind up the actor's passion project.  Everyone is giving a strong performance here—there's not a weak link (Kidman comes closest in terms of her wildly diverging accent, though in fairness I believe she's supposed to be a Breton).  Despite the rather unstereotypical players (if you told me "there's a Viking movie coming out," I don't think I'd immediately ask, "so they definitely got Ethan Hawke and Nicole Kidman, right?"), there was logic to this cast, each filling roles that seem strangely tailor-made for their strengths, particularly Taylor-Joy.  (Kidman gets to be freakish in entirely different ways than everything else is freakish, harking back to some of her more outlandish predator-women characters.)  Meanwhile, Willem Dafoe is better than just "strong," once again deploying his wild-eyed lunatic in service of a jester-warlock.  But Skarsgard is the indispensable lens through which we view this terrifying world, ranging from the comparatively subtle disquiet he evinces as he mentally compares hacking-and-slashing through a Slavic village to his father's assassination and his mother's kidnap, to the committed theatrics involved in invoking animal spirits for their fury and power (and these specific modes even overlap).  But what surprised me the most about The Northman was how much of an emotional journey it actually becomes, a character study of a man who considers himself kin to animals, and who's willingly accepted his fate as a figure in a mythic cycle, but who paradoxically becomes more human and complex the more he accepts that he is a fool of fate.  It kicks the shit out of the last time an A24 veteran based a movie on a medieval poem, anyway.  It is, as noted, very fucking metal.
Score: 9/10
*The Passion of the Christ is great, but I think it's mostly just trying to get at Gibson's understanding of the Trinity.
Posted by Hunter Allen at 6:45 AM